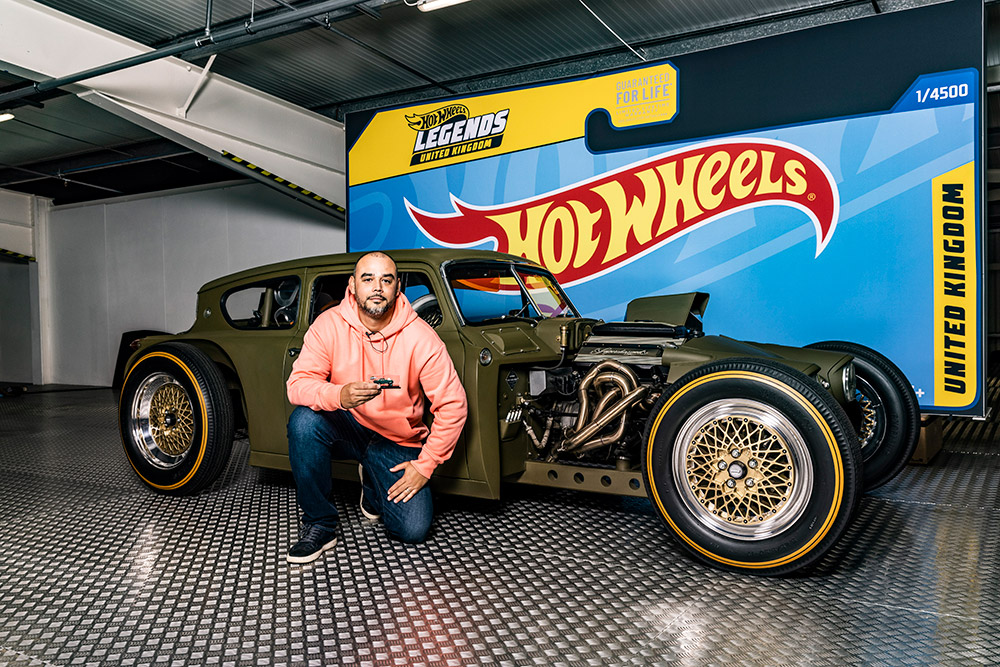 Beating a record number of over 100 entries, ‘The Misfit’, a 1963 Ford Anglia with a supercharged BMW engine, will represent the UK in the global Hot Wheels™ Legends Tour and stake its claim to be a 1:64 scale die-cast in the 2023 line up. Built by Michael Charalambous and only finished in 2022 after final push during Covid Lockdown, The Misfit was also voted the fans’ favourite at this year’s event.

For the first time in the UK, the 10 finalists and their custom cars were brought together in person at Studio 434 in Potters Bar, near London, home of the Rodger Dudding collection. In front of a live audience, judges Helen Stanley, Ian Callum, Jonny Smith and host Alex Kersten spent the day assessing the cars, chatting to their creators and painstakingly scoring and vigorously debating each car against the criteria of demonstrating authenticity, creativity and ‘garage spirit’.

The Misfit’s owner Michael Charalambous is not an engineer by trade and was previously an estate agent, but with an incredible eye for detail, coupled with the ambition of buying his dream car, a Ferrari 308GTB, he set out on a mission to build and restore a series of cars with a plan to ultimately trade up to the Italian classic. The Misfit is his most ambitious project, pouring hundreds of hours into the project after purchasing the back of a very rotten Ford Anglia body shell. Created purely from ideas in his head, Charalambous took over from fabricator Rob Rashbrook to build a unique Hot Rod that with the exception of perhaps being produced in the millions as a toy, would be a one-off.

“My vision was for a car that if you pulled up at the traffic lights, you would never pull alongside something similar,” says Charalambous. “Hot Wheels played a major part in what we build, inspiring some of design elements such as the exposed engine and wheels. I often thought, how would Hot Wheels do it, so to win is just incredible. After winning Hot Wheels Legends UK and all the attention at the shows, I don’t think I will ever sell it now!”

Propelled by a four-cylinder now supercharged engine and drivetrain from an E30 BMW, mounted on a bespoke chassis using a mix of Ford and Hillman Imp parts, The Misfit cleverly weaves old and new custom trends and components. Finished in a flat military green paint, sitting on old-school cross-ply tyres, Charalambous uses the car regularly on the road and is no ‘trailer queen’. From the school run to custom car events hundreds of miles away, the smiles and waves he gets from fellow road users drives him to pile on the miles whenever possible. It was driven to the event too, though Charalambous admitted he lives just miles from the venue!

The Misfit features a myriad of attentive details and a fastidious finish inside and out, leading to the Anglia scooping a series of awards at car shows in its debut year. Examples include BBS wheel centres that came from a Ferrari GT racer that took six months to modify with the correct offset and rims to achieve the desired stance. Even the centre caps have been intricately sign written by renowned signpainter Neil Melliard. Inside, the custom interior features colour-matched details from the Marshall audio, cup holder and leather trimmed seats. The steering wheel has been replaced by another BBS wheel centre and Melliard has added sign written quips on the gauges and rear view mirror.

Ahead of the event, the Legends experts had previously whittled down the entries to 10 special finalists. Reflecting the diversity of UK car culture these included ‘The Mexorcist’ – a modified 600bhp YB-engined Ford Escort Mk2, a Group 5-inspired spaceframe E21 BMW, the period ‘This and That’ Mini twins as well as the first modified EV, a fresh Honda-e, alongside a pair of drag racers. Underlining the breadth of the cars was ‘Boris’, a turbocharged 1000cc K11 Nissan Micra bought for £300 on Facebook, a VW-engined Porsche 911 Targa and reliving the heady days of ‘Max Power’ culture builds in the late 90s/00s, a Citroen Saxo with suicide doors, custom interior, 20” wheels and substantial audio system.

The Misfit will now face cars in the Semi Finals on November 10th with the Global Final on November 12th. With the increasing popularity of the competition, Mattel has confirmed two winning entries will be reproduced in 1:64 scale for enthusiasts of all ages to enjoy. Last year’s winner from the UK, the Volvo Gasser ‘Ain’t no Saint’ is expected to be in stores by Christmas.

Fans can watch the produced episode from the UK event on Car Throttle’s YouTube channel. To learn more about the Hot Wheels Legends Tour visit www.hotwheels.mattel.com and follow #HotWheelsLegendsTour.