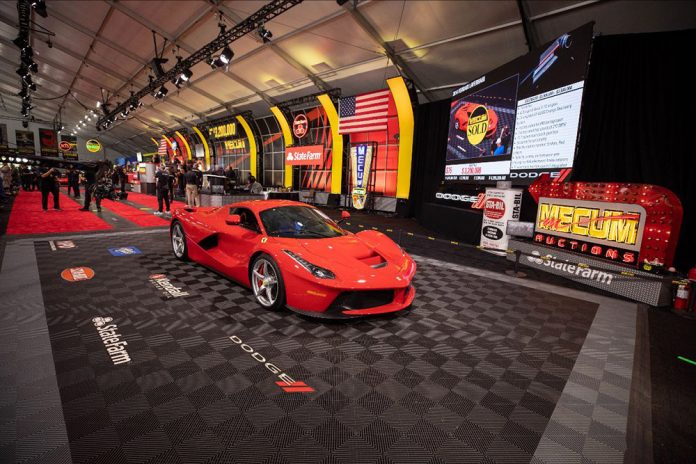 Mecum Auctions has been holding its annual Daytime Auction in Monterey during the famed Car Week since 2009, and this year’s return to the Del Monte Golf Course on the grounds of the Hyatt Regency Monterey Hotel and Spa marked the company’s most successful Monterey auction to date. As a total of 519 vehicles crossed the block throughout three auction days, Aug. 12-14, 411 cars hammered sold for an exceptional sell-through rate of 80% and total overall sales of $57.4 million. All 10 of the auction’s top-selling vehicles eclipsed seven figures with the top slot claimed by a 2014 Ferrari LaFerrari (Lot S75) that brought $3.41 million.

Another hit with bidders at the Daytime Auction in Monterey was Serial No. 1 of just 350 2022 Acura NSX Type S (Lot S117.1) slated for production. The yet-to-be-built car was offered with all proceeds to benefit charity—including the Center for Science and Industry and an innovative STEAM education program for underserved youth—and it ultimately achieved a final sale price of $1.1 million, far exceeding its base MSRP of $171,495. Similarly, a 2022 Triumph Scrambler 1200 Steve McQueen Edition motorcycle (Lot S115) crossed the Monterey auction block with proceeds to benefit the Boys Republic non-profit youth-treatment community. The bike and its charitable cause were well-received by the crowds in Monterey, and it achieved a final sale of $55,000, more than three times its $16,400 base price.

Private collection offerings are a highlight at nearly every Mecum auction, and Monterey 2021 featured a top-shelf selection of them. Big Al’s Collection of 84 cars, engines, motorcycles and more achieved total sales of $12.05 million, and the more modestly sized Don Wallace Collection of six stunning collector vehicles saw all six of its crew hammer sold for an aggregate $2.2 million.

The complete top 10 collector car sales at the 2021 Daytime Auction in Monterey include: