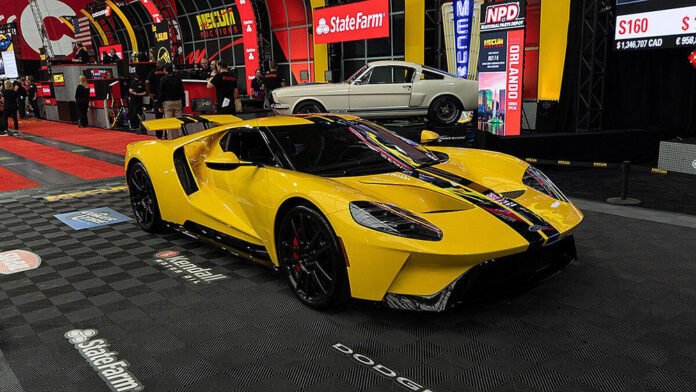 The fourth annual Mecum Glendale, Arizona, auction at State Farm Stadium, held March 16-19, became the most successful iteration yet as $66.3 million in overall sales was achieved. The total marks a 53% increase over last year’s Glendale auction, and sell-through for the reserve-based auction reached 78% as 1,285 of all 1,657 lots offered ultimately hammered sold.

Private collections were responsible for nearly $20 million of the $66.3 million auction total, with the headlining Mile High Collection seeing 100% of its more than 50 vehicles sell for a total of $5.9 million, while the main-attraction Hooked on Vettes Collection achieved sales for all 13 of its Corvettes as well as for all of its 180-plus large-scale neon signs for aggregate totals of $1.5 million and $1.7 million, respectively.

Mecum auctions have seen an ongoing string of successful, record-setting results regarding attendance, individual sale prices and overall sell-through rates with seemingly no end to the growth in sight. Glendale 2022 furthered the trend with even sponsors like Dodge reporting record engagement with its pre-auction Power Parties and popular Thrill Ride attraction. Mecum auctions in Houston, Texas, and Indianapolis are up next, and results from both of those events are expected to follow suit.

The complete top 10 collector car sales at the Mecum Glendale 2022 auction include:

For access to complete auction results, sign up for a free MyMecum account at Mecum.com. Mecum’s next live auction event will be held next weekend, March 31-April 2 in Houston, with 1,000 vehicles expected to cross the auction block, followed by the company’s flagship auction in Indianapolis, Dana Mecum’s 35th Original Spring Classic, May 13-21, slated to feature an impressive 3,000 classic and collector cars. For more details on upcoming auctions, to consign a vehicle or to register as a bidder, visit Mecum.com, or call (262) 275-5050 for more information.