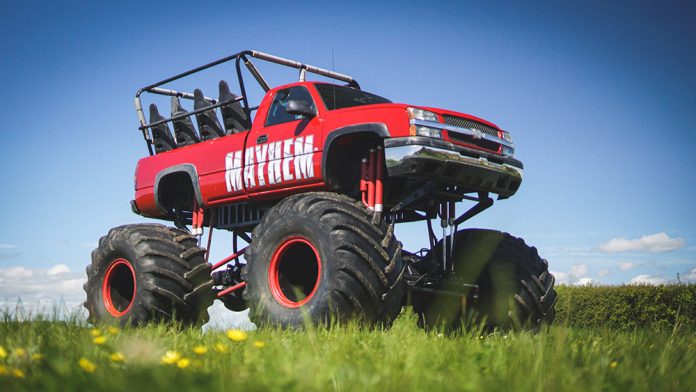 A 2013, first-generation Chevrolet Silverado monster truck currently named ‘Mayhem’ is being auctioned this week. Monster trucks are hugely popular in both the USA and UK, however are a rare sight on British shores with only four ride trucks here, making this vehicle an incredible find for any enthusiast.

‘Mayhem’, as it’s now known, was originally re-engineered by TNT 4×4 Shop in Long Island, USA, with a full lifted chassis, all the shock absorbers the TNT team could get its hands on, 66-inch tyres as well as a bed-mounted roll cage with eight bucket seats for passengers. After being purchased by the current owners in 2014, it was delivered to the UK where it has been showcased at various events up and down the country, providing over 30,000 passenger rides in the last five years.

Since being delivered to the UK, ‘Mayhem’ has had more re-engineering work done, mainly to the chassis, which has had more boxing and bracing added to it, with no signs of chassis or body corrosion. The enormous 66-inch tyres, that each weigh 700kg, are in fact agricultural ‘flotation’ tyres which can be easily sourced as and when the time comes to replace them. Its 300bhp, 6.0-litre Vortec V8 engine, drivetrain and suspension have been well maintained (including regular engine services during the summer show season) over the years, as it has been imperative the truck runs smoothly so that passengers can enjoy the ride. Weighing seven and a half tonnes and over three metres off the ground, ‘Mayhem’ is more than capable off-road and fit for more car-crushing action for many years to come.

As this is not a competition truck, the interior of the vehicle looks as you would expect a Chevrolet Silverado to be. Its cloth seats are in good condition, and it has both a full working stereo and air conditioning. There are a few signs of wear and tear in the cabin, which is to be expected after so many years participating in shows. Each of the bucket seats in the bed of the truck has a harness and is fully weatherproof. The bed itself is boxed, lined and features a full roll cage that incorporates the eight seats as a health and safety measurement.

“Monster trucks are very popular in America, so to be able to have one at auction here in the UK is such a rare treat. It’s not something many people come across and for ‘Mayhem’ to be in such fantastic condition really is the icing on the cake,” says Chris Pollitt, head of editorial at Car & Classic. “I think a lot of people might look at this monster truck and not immediately realise the full potential of a vehicle like this. The possibilities are endless and you could make your money back very quickly, whilst having bucket loads of fun.”

The online only auction starts on the 23rd June at 17:00 BST and lasts for seven days, concluding on the 30th June.