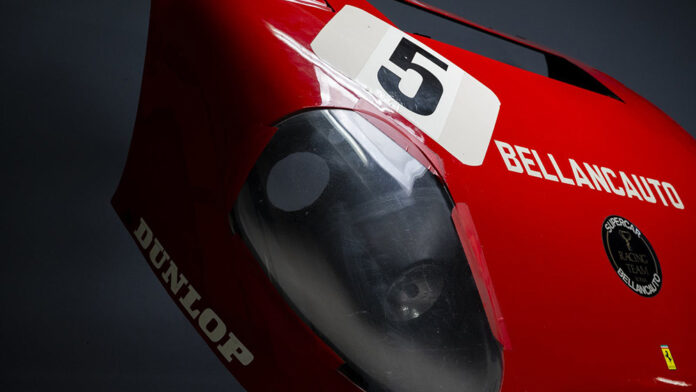 Even in the true spirit of Europe’s number one classic and niche automotive website Car & Classic’s standalone auction site, where quirky, rare and unusual pieces are often to be found, bespoke front ends for racing Ferraris don’t come more glamorous or special than this: a Fabrizio Violati project (from Scuderia Bellancauto) for the endurance sports racing version of Ferrari’s 512 BB, this front end was made for the second 512 BB LM, more accurately called BBB.  Other factory cars sported Pininfarina-styled bodywork. The third B refers to Bellancauto, the ‘Scuderia’ responsible for the project.

The car to which this front end was fitted, chassis 35529, had its racing debut at the 1000km of Monza in April 1981, where it claimed the IMSA GTX/GTP class win. The car would also go on to compete in two 24 Hours of Le Mans races, as well as the 1982 6 Hours of Enna-Pergusa, where it came sixth overall, and the 1000km of Mugello where it came tenth. This specific car’s 1/43, 1/18 scale models, as well as its slot-car version, feature the same custom front.

As with so many period race components, the damage to the decals and stone chips in the lower parts proudly show a weathered piece of history. Fabrizio Violati’s creation is said to have been conceived with input from former Scuderia Ferrari chief mechanic, Giulio Borsari. If his ‘B’ had been added, the car would have been immortalised as the 512 BBBB.

The auction starts this week: https://www.carandclassic.com/auctions/1981-ferrari-bbb512-le-mans-front-bodywork-gOY5V4