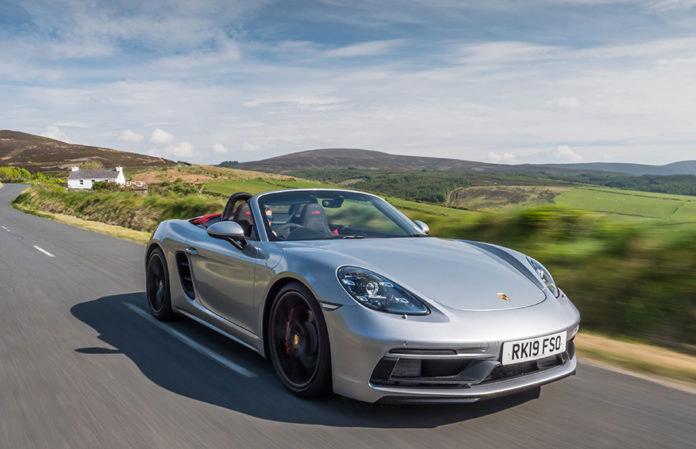 With the annual Isle of Man TT event under way, the island’s very own stunt driving rally champion Mark Higgins takes a Porsche 718 Boxster GTS for a trip down memory lane. 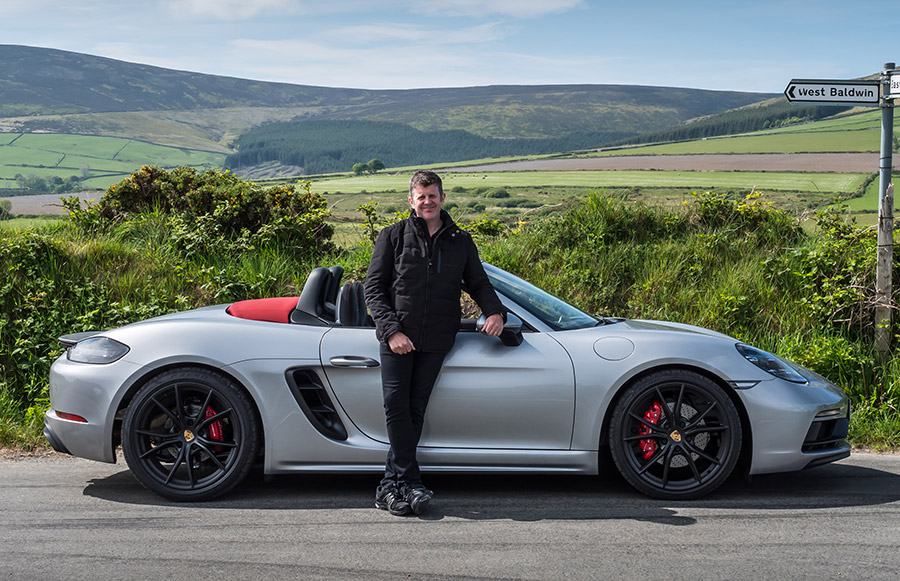 “The Isle of Man TT course is a living and breathing thing, because every time you drive around it, it changes. At 37.75 miles in length you can never guarantee what the conditions are going to be. On a race track you can finetune your lap to a tenth of a second— a little bit here, a little bit there. But when you’re sitting on the start line at the TT, and you haven’t seen the track for two days and have to immediately go flat out, it’s a little bit daunting.” 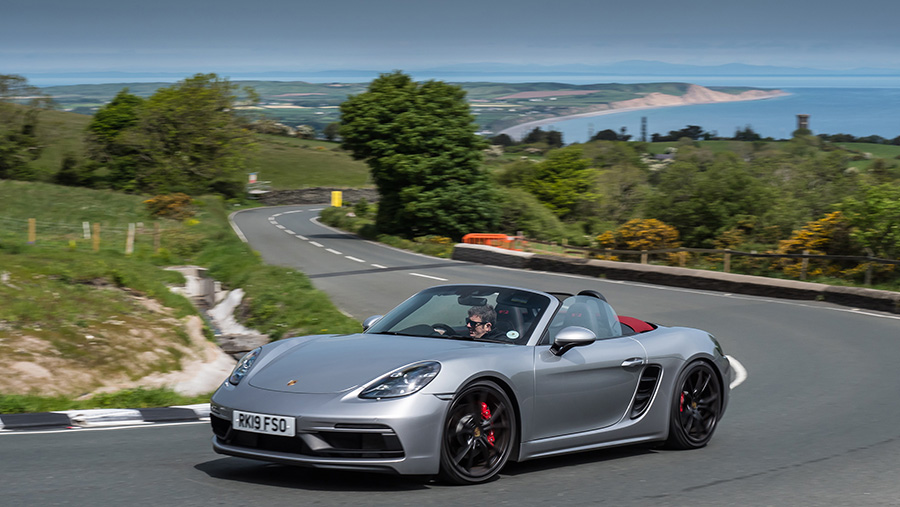 In the corner of a bustling café, as he stares out of a rain streaked window, Mark Higgins is trying to put into words the challenge of setting a record-breaking lap time around, what he calls, “the most interesting, exciting and dangerous track anywhere in the world”. And he should know. Three-time British Rally Champion Higgins holds the lap record for four wheels around the infamous mountain course, at an eye-watering average speed of 207.171 km/h. It is a time just shy of the blisteringly quick supersport bikes that are currently competing in the fearsome 2019 Isle of Man TT.

“It’s almost gladiatorial,” Higgins continues in his local Manx lilt. “If you do get a corner mixed up over here, it’s not going to be good.” 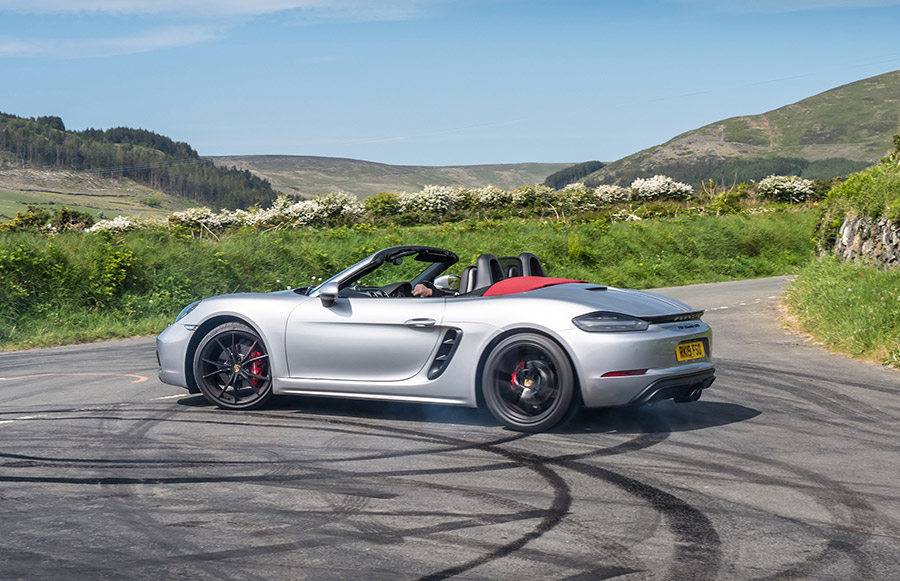 He has a point. Where most modern race circuits have the benefit of gravel traps, tyre walls and catch fencing, the TT offers no such precautions. Get it wrong, and you’ll meet with what the racers call the ‘track furniture’ — a house wall, a lamppost or, if you’re lucky, some more forgiving foliage. As former Isle of Man TT winner Richard ‘Milky’ Quayle recently told the New York Times: “If Roger Federer misses a shot, he loses a point. If I miss an apex, I lose my life.”

So why take the risk? “It’s an amazing challenge,” Higgins explains. “There’s no feeling like it, racing on public roads that are totally closed off; it’s just very, very special.” 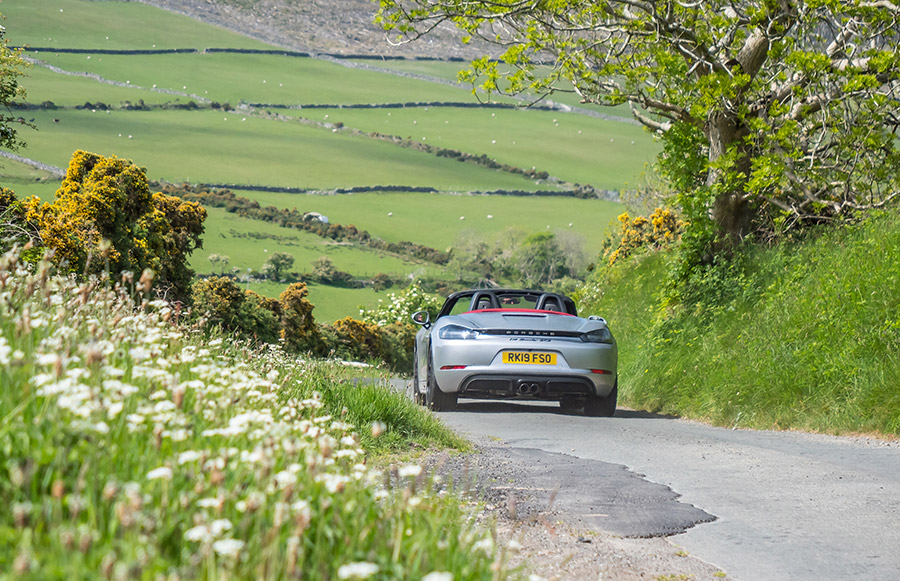 Over Higgins’ shoulder, a carefully curated set of motorcycle artwork, racing laurels and bug-splattered crash helmets is on display. The café — Conrod’s — is owned by close friend and two-wheeled Manx legend Conor Cummins, who opened the coffee shop while recovering from a particularly spectacular crash at the 2010 TT.

Often Cummins can be found serving customers but, this being June, tens of thousands of visitors have descended on the island and with race fever reaching its peak, he’s got business of a rather quicker nature to attend to. 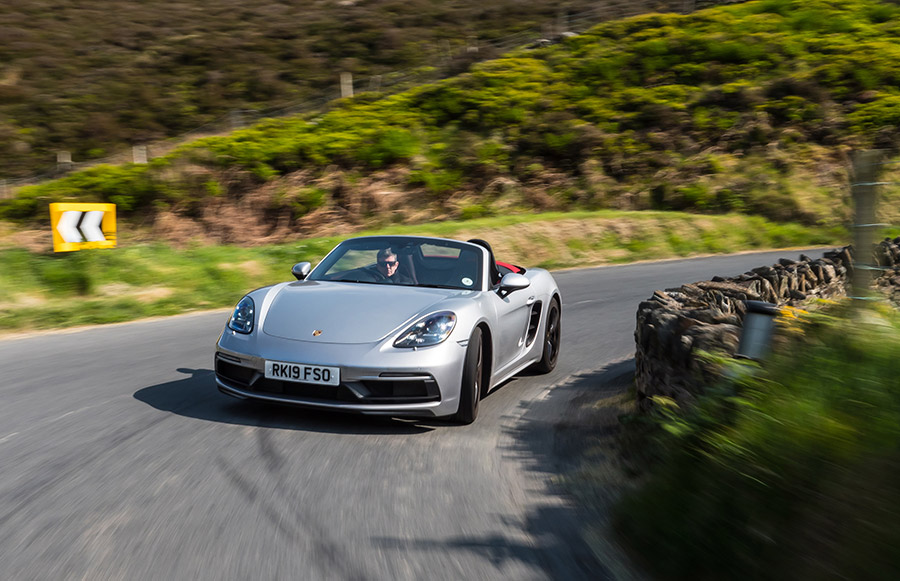 Leaving Conrod’s and the small town of Ramsey behind, Higgins is keen to make the most of an opening in the weather. Accelerating out of Ramsey hairpin and up onto the mountain proper, the sun casts dappled light on the narrow strip of tarmac, making visibility on many parts of the road even more difficult. Not that Higgins seems to notice, as he guides the 718 Boxster GTS (fuel consumption combined 9.0 – 8.2 l/100 km; CO2 emissions 205 – 186 g/km) through a string of drystone walled corners with an economy of effort that defies belief. 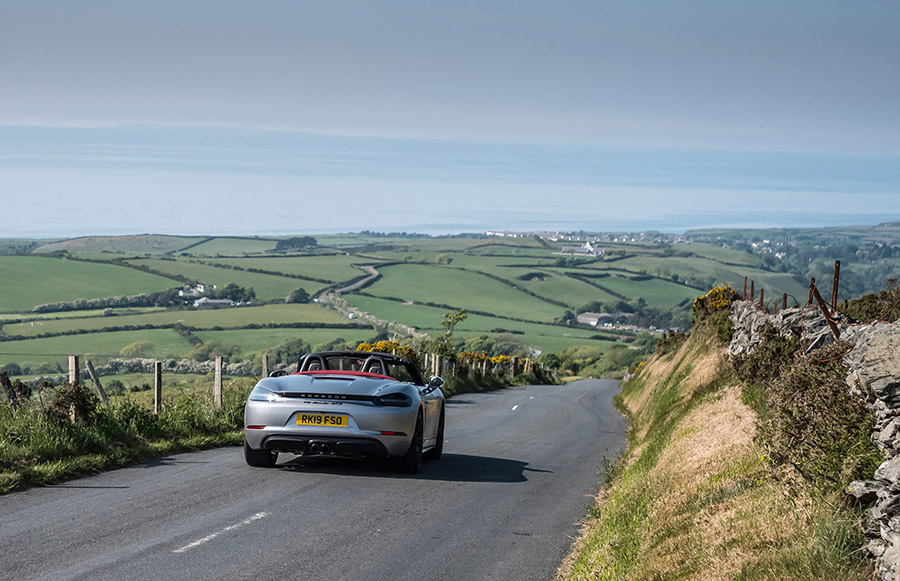 With no speed limit, the mountain section of the TT course is considered by many to be one of the world’s greatest driving roads, but it’s not Higgins’s favourite stretch. “With no speed limits, we’d always have a crack over the mountain when growing up, but all the great roads [that make up the Manx rally] are actually in the middle of the TT course.”

He takes an unexpected right turn on the approach to Cronk-ny-Mona ­­— a flat-out 260 km/h left hand corner during TT week — and down an impossibly narrow lane. “This is what I’m talking about; this is my favourite stretch of road, anywhere in the world. It’s super narrow, very fast and hugely challenging between the trees.” 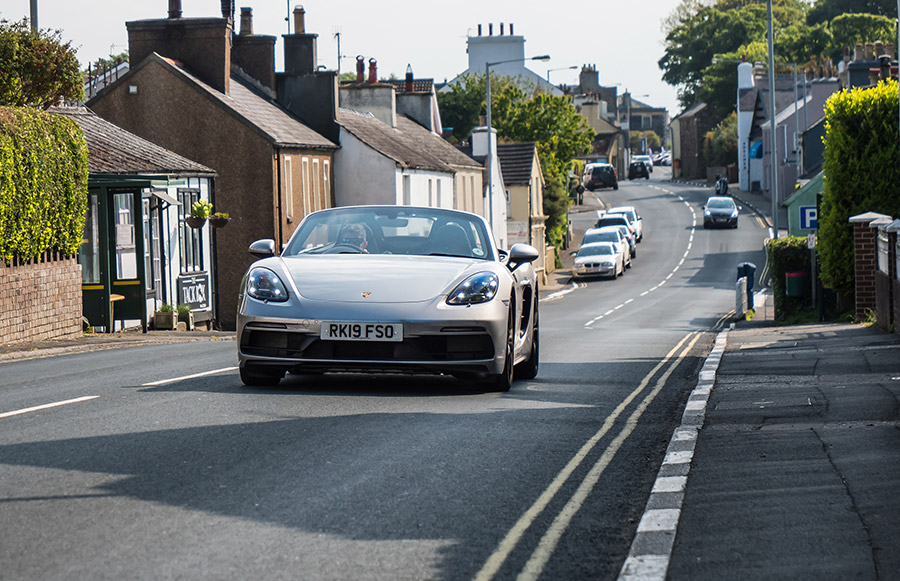 To most observers, the road would seem unsuited to a road car, let alone for a spot of motor racing, but Higgins is undeterred as he positions the 718 exquisitely over every bump, rut and camber change to minimise the load going through the suspension.

With each corner, he reels off memories as if they were a detailed set of pace notes. “This is all flat-knacker … that’s a sixth-gear corner just about … you just think your way around the corner, using your fingertips … you’re bouncing from one side of the road to the other … you would not believe how fast we travel down here”. 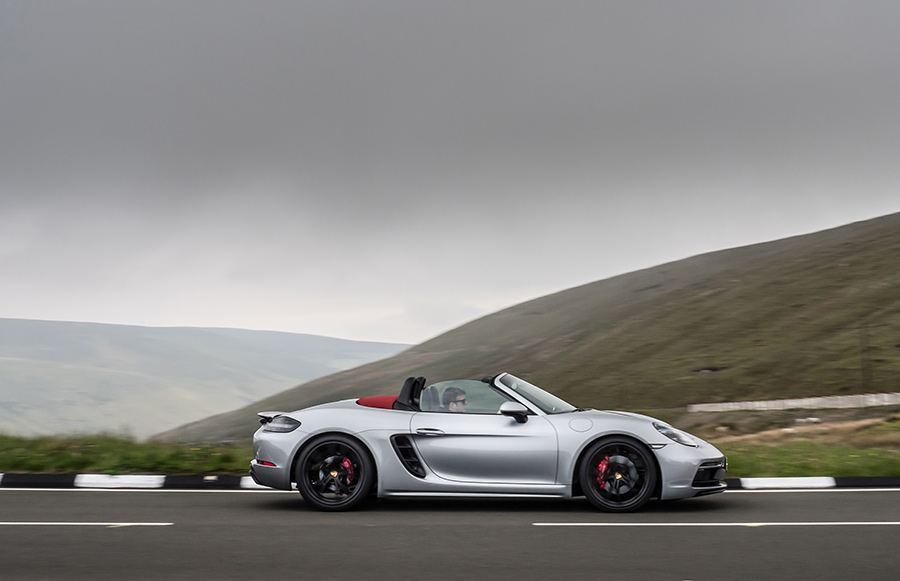 At the end of the stage, Higgins pulls over to the side of the road and jumps out, gazing at the view. Since leaving the island in 1993, his career has changed beyond recognition: he’s clocked up three British championships, frequent stints in WRC, the odd bit of rallycross and, of course, that lap record breaking four-wheeled TT lap. But these days, you’re more likely to find him on a movie set than on a rally stage ­— his most high-profile work being as a stunt-driver for the Bond franchise. 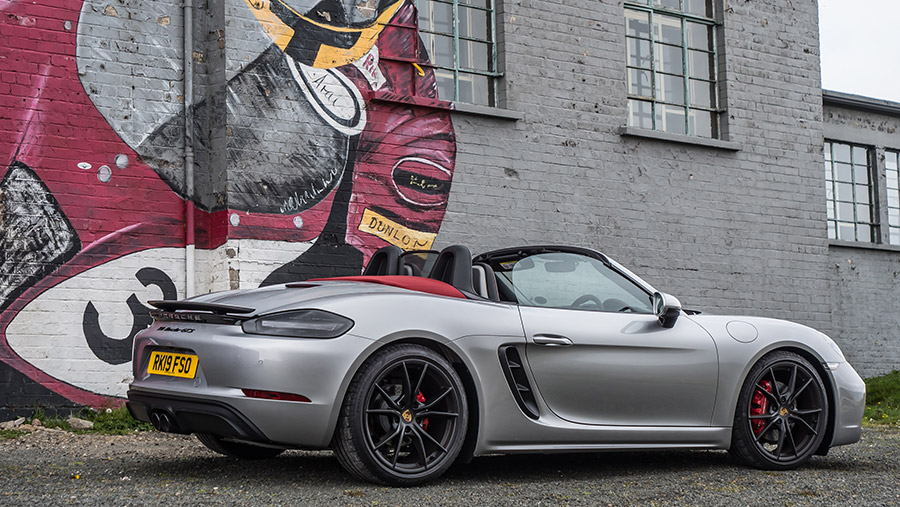 It’s once in a lifetime type stuff. When else do you get to “slide through the square outside the Vatican at 100mph (160 km/h) plus”? But as Higgins leans against the gently ticking Boxster, he looks at his watch. Soon he’ll be on a flight off the island, heading for another Hollywood filming commitment, yet there’s a reluctance about his body language. He offers a wry smile. “I was born and bred on the Isle of Man. I’m very much a Manxman, this is very much my home. And when I get a chance to drive these roads … well, there’s nothing quite like it.”

The shared basis of these two cars is the synthesis of 50 years of racing experience at Alfa Romeo.
Read more
Motorsports