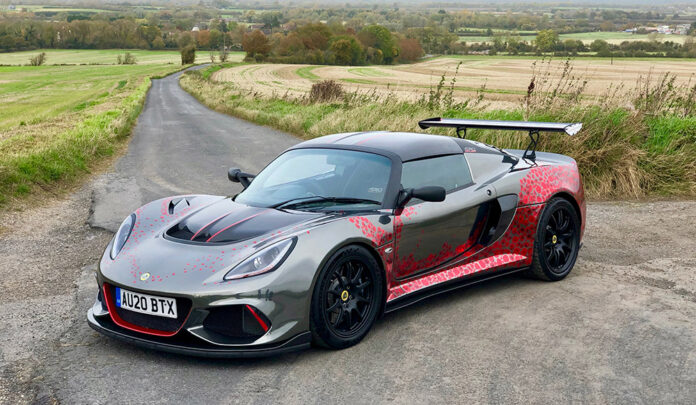 A focal point for Remembrance 2021, and in support of the recovery of wounded, injured or sick service personnel and veterans, the iconic sports car’s bespoke livery has been designed and finished by the charity’s beneficiaries. The Lotus Exige Cup 430, celebrating its last year in production, will play a pivotal role at this year’s Race of Remembrance, as Safety Car. The car’s role is to conduct safety duties throughout the race such as circuit and speed management, as well as bringing all competitors into the pits for a special pitlane remembrance service during the 12-hour endurance motor race at Anglesey Circuit.

This year’s poppy car design has been a labour of love for a team of former servicemen and women. Representing all three services, they’ve been involved throughout the process from initial design concept to the completed wrap.  Stunning in both sunshine and moonlight, in darkness a hidden depth to the livery is revealed  amid the thousands of hand placed poppies, a special 635 individually cut and placed reflect a red glow in tribute to those who lost their lives in Afghanistan and Iraq.

Formally unveiled today on the site of former RAF base – Lotus Cars’ headquarters in Hethel, Norfolk –  a poignant of service of remembrance was held with the 2021 Poppy Car marking Lotus’ renewed commitment to the Armed Forces.

Having recently become a member of Mission Automotive, the Armed Forces engagement initiative delivered by Mission Motorsport in partnership with the Royal Foundation and The Society of Motoring Manufacturers and Traders (SMMT), the new partnership’s aim is to encourage ex-military employees to act as mentors for Service Leavers and Veterans entering the automotive sector.

“It is very fitting that Lotus is supporting Mission Motorsport this year. Lotus has a long connection with the armed services; our Sports Car facility in Hethel, Norfolk, for example, is a former RAF base, with some of the buildings from the second world war being repurposed and still in use today. Our test track, in part follows the old runways so we are constantly reminded of the sacrifices made over the years by our service personnel. – Corinna Fletcher, Organisation Development Director, Group Lotus

“Lotus is embarking upon an exciting future and is leading the way in efficient and lightweight mobility technologies including high performance electric cars. We are signatories to The Armed Forces Covenant and as such we are pleased to help grow the careers of former service personnel at Lotus, where their particular skills of creativity, leadership, communication, motivation and discipline are vital for the future growth our company. We already have ex-military personnel who have a found rewarding careers with Lotus in IT, Engineering, Project Management and Production.”

James Cameron, CEO and Founder of Mission Motorsport said, “We first made an art car in 2015 and were delighted at how it resonated with our audience.  It has lost nothing in the impact in the intervening years. As we pick ourselves up following the setbacks of Covid, and the impact of the withdrawal from Afghanistan, the Poppy Car is emblematic of a wider cause.”

Former soldier in the Green Jackets, beneficiary Marc Tarling is part of the team of beneficiaries who have worked on the car. Suffering from PTSD, and not having left the house for nearly a year, Marc has learnt a new trade and has grown in confidence since engaging with the charity and working on the project. Marc said, “Working on the Poppy Car has been a real labour of love. For the first time in a long time I have been able to talk and engage with other people, have confidence in my abilities, be motivated to get up, do something and take pride in what I have achieved.”

Chris Read, former Lance Corporal in the Royal Engineers said: “I’m so proud of what has been done. I’ve been really low and to have been invited to have input, and for my ideas to have been taken on has been an incredible lift. It means a huge amount to me personally to have been involved with Mission Motorsport and with all three Poppy Cars – that feels quite special when things are dark.”

James concluded, “The Lotus has proved to be extremely popular with our beneficiaries and is a project that brings joy to all those who have not only worked on it but have seen it.   We are grateful to Lotus for the provision of such an iconic car.’’