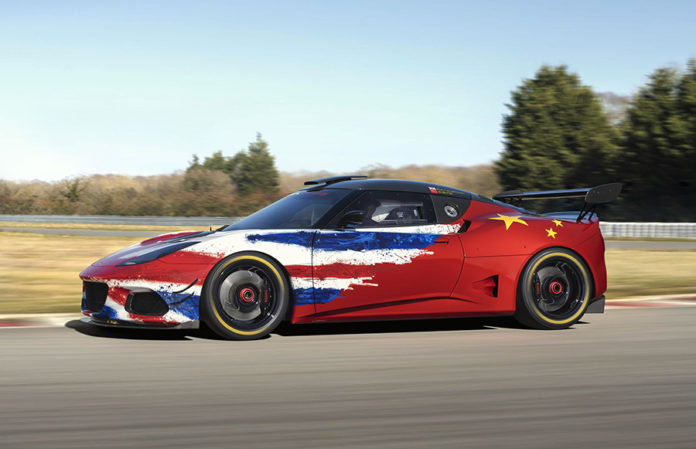 Marking a return to the international racing arena, one of the most famous names in competitive motorsport, Lotus, launches its brand new Lotus Evora GT4 Concept. Using 70-plus years of engineering innovation on road and track, the iconic company unveils its latest, British-built motorsport entry, at the Shanghai Auto Show 2019.

Retaining the personality and natural ability of the road-going Lotus Evora, the GT4 Concept builds on the brand’s advanced lightweight engineering expertise to deliver a race car that perfectly encapsulates the company’s competitive spirit.

Developed and prepared in Hethel, UK, the Evora GT4 Concept brings the inherent talents of Lotus to bear in both the car’s aesthetic and performance credentials. Undeniably an Evora, and with a unique Anglo-Sino launch livery created by Russell Carr, Design Director, Lotus Cars, the racer will continue to be developed by Lotus Cars in the UK. Responsible for the development of the company’s competition cars, renowned Lotus test driver and the company’s Director of Attributes, Gavan Kershaw and his team will spend 100s of hours on the famous Hethel test track, which has shaped countless racers over six decades.

Proving its racing credentials, the last generation of Evora GT4 won prestigious championships and races at the most famous tracks around the world, including British GT, Dubai 24hrs, Barcelona 24hrs, European GT4, Sepang 12hrs the Pirelli World Championship and most recently crowned vice-champion in the Swedish GT Series with Cyan Racing in 2018.

A testament to the inherent ability of the Evora, the evolution of the new GT4 capitalises on the car’s already advanced road platform which was heavily influenced by Lotus motorsport-inspired engineering. The slick shod centre lock wheels, rear wing, aggressive stance and race ready cockpit gives an indication of the car’s true potential.

Appointed factory drivers, Mr. Cui Yue and Mr. Gaoxiang Fan bring new Chinese racing pedigree to Lotus motorsport. Both are graduates of the Geely University and have gone through their motorsport apprenticeships with the company’s sponsorship. Gaoxiang, 25, has enjoyed success to date in the China Rally Championship and was the China Touring Car Champion for 2017. Cui, 29, has clocked up wins including the China Touring Car Championship in 2014, China Formula Grand Prix, China GT and most recently competed in the Porsche Carrera Cup Asia in 2018.

The factory drivers will demonstrate the car’s potential through the newly established Lotus Driving Academy in China, with events to be held for the team and members of the public as high-octane driving days, driver training sessions and hot lap experiences, starting later this year.

Commenting on the launch of new Lotus Evora GT4 in Shanghai, Phil Popham, CEO, Lotus Cars said: “Lotus as a brand was born from the thrill of competition, and the Evora GT4 Concept will continue that legacy while opening up a new chapter in our racing experience. All of our cars retain motorsport within their DNA, and almost every road car in the company’s history has raced successfully at some point. It’s the philosophy that Colin Chapman founded Lotus on, and that we proudly continue to this day.”

As part of the car and drivers’ development, the team will be based at Hethel this summer. Using the legendary test track as a proving facility, and with tutelage from Gavan Kershaw, they will work on race craft, familiarisation and setup.

With an unrivalled pedigree on track, Lotus has returned to its roots to produce a racer worthy of the famous green and yellow roundel. Developed through the company’s extensive motorsport experience, it continues a legacy of 70 years in competition. Lotus’ motorsport results rank it among the all-time greats, with 81 Grand Prix wins, six Drivers’ World Championships and seven Constructors’ World Championships along with countless wins and Championship titles over a multitude of other categories.

Rather than rest on its laurels, Lotus considered the lessons learnt from the previous championship/race winning generation Evora GT car to frame the performance characteristics of the new racer. Using the same anodised, lightweight aluminium, extruded, epoxy bonded and rivetted high-stiffness chassis architecture as the road car, the Evora GT4 Concept incorporates the latest motorsport safety systems and technology to ensure the car retains a light but strong ethos.

In a case of ‘road to race’, the new Evora GT4 Concept draws from the development of Lotus’ acclaimed sports cars. Retaining the Evora’s distinctive profile, but with added aggression, the GT4 Concept model is strikingly similar to the phenomenal Evora GT430 and GT430 Sport, the most powerful road-going Evoras ever. Sized identically as the road cars, the GT4 Concept incorporates the lessons learnt through the British marque’s extensive development process. Using countless hours on the Hethel test track to deliver benchmark performance and handling in the road cars, the transition to full-blown race car is straightforward.

Gavan Kershaw explains “Every Lotus is famed for its performance in ride and handling on challenging roads, surfaces and through tight corners. This performance is borne from years of motorsport experience and testing at our HQ test track in Hethel, UK. All of which delivers confidence, response and feel to the driver. With this knowledge and the underpinning of a stiff chassis, low centre of gravity, double wish bone suspension and all the traits expected of a Lotus race car, this Lotus race car will give the driver a competitive edge right from the start.”

Lotus’ reputation as a leader in intelligent engineering is preserved through the car’s use of a lightweight carbon-composite body – optimised to ensure every gram serves a purpose. Despite the addition of enhanced structural and motorsport safety systems, this Lotus racer will weigh 1200 kg (subject to ballast), while reaching a top speed of 170mph.

The use of specifically designed hybrid body panels, incorporating carbon weave sections. This allows for the introduction of advanced aerodynamics to boost downforce and high-speed stability, with a competition biased balance. It employs the same front clam layout as the Evora GT430 road car, but with a different configuration to allow for the cooling requirements of a race car. This includes removable canards and in-mouth brake ducts, as well as louvers positioned on top of each front wheel arch to reduce pressure above the wheel. The car’s rear also uses the same set up as the road car, with sculpted ducts behind each wheel to vent airflow as quickly as possible from the wheel arches, but adds a composite, four-vein diffuser and an adjustable, carbon-fibre, flat-plan motorsport wing.