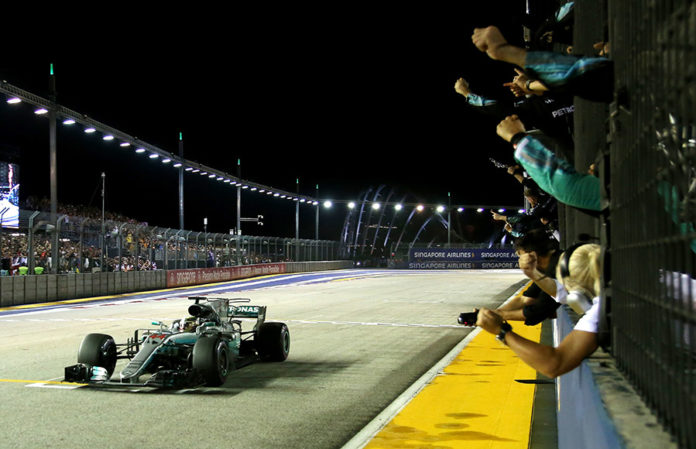 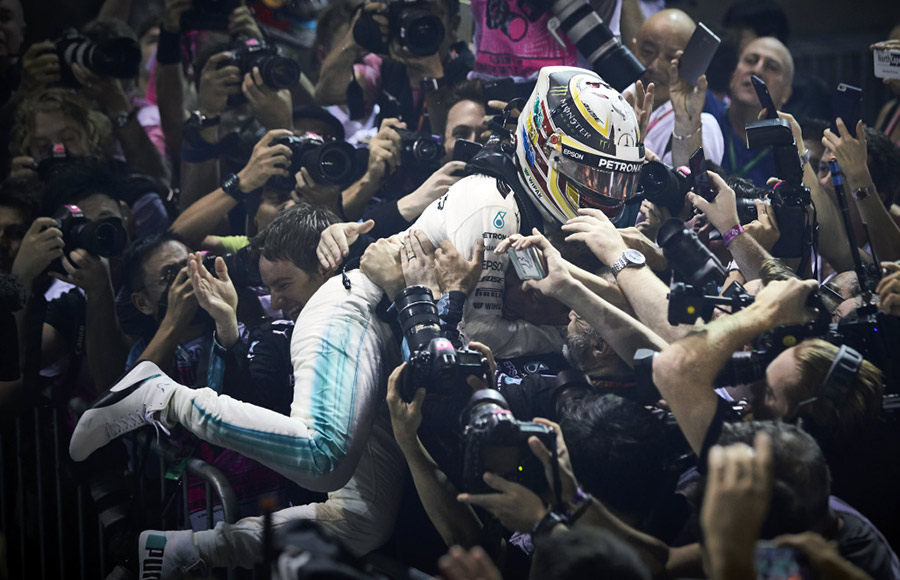 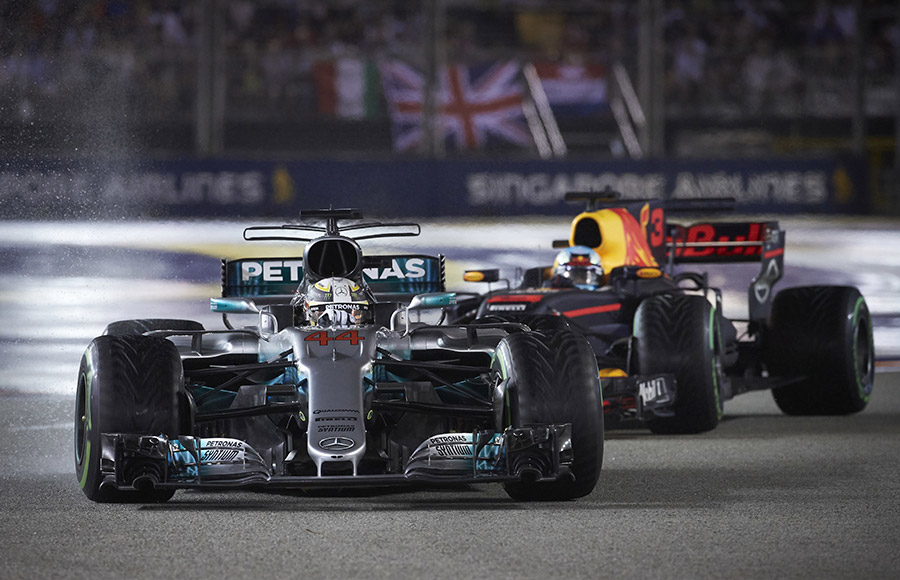 “What a day – I can’t believe it, I’m so happy! I came in today and I saw that I was raining and I knew that this balances everything out. I love racing in the rain, then everything unfolded in the beginning. Starting on the Intermediates I thought it was going to be much closer pace-wise. These conditions give you the opportunity to really make a difference with your driving. It was the first time for all of us driving here in the rain, so it was a massive challenge. But I love that when you have to rise to the toughest of challenges, that’s the most exciting part for me. Then it was all about staying focused and not making any mistakes. We came to a track that was potentially our weakest circuit and we leave with a win like this and so many points – that’s a very fortunate scenario for us. Valtteri also did a great job, so to have all these constructors’ points is awesome.” 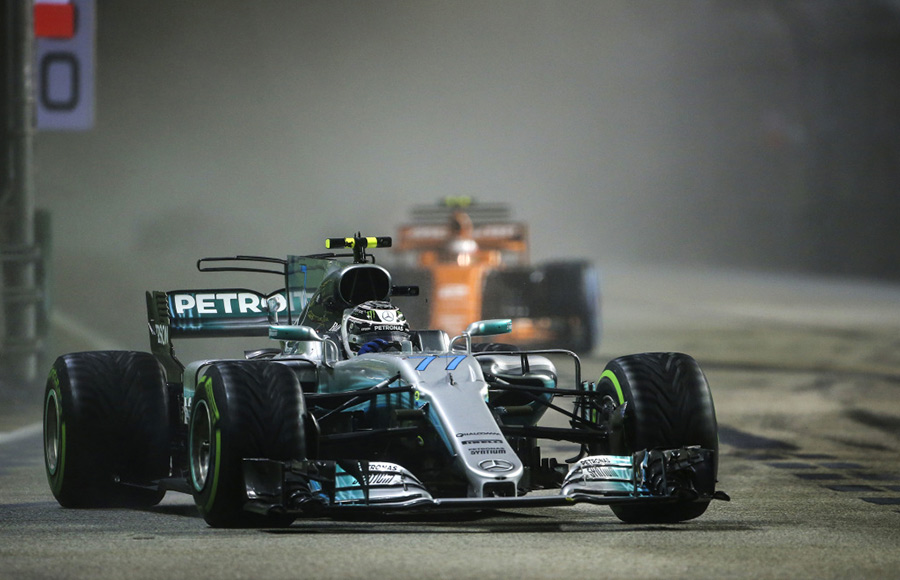 “Today shows that anything is possible – that is racing! I think under normal circumstances it would have been extremely difficult for us to be on the podium. But today, everything really came to us, and we got very lucky. In the dry, the car was performing better than expected and the pace was very good for Lewis and me; in the wet, I struggled a bit more than him. It’s nice to bring a trophy home after what has been a tricky weekend for me. But all in all it was a nearly perfect race for us as a team. There are still six races to go so everything is still wide open. We have been struggling quite a bit this weekend, so we need to make sure we learn from it for the future.” 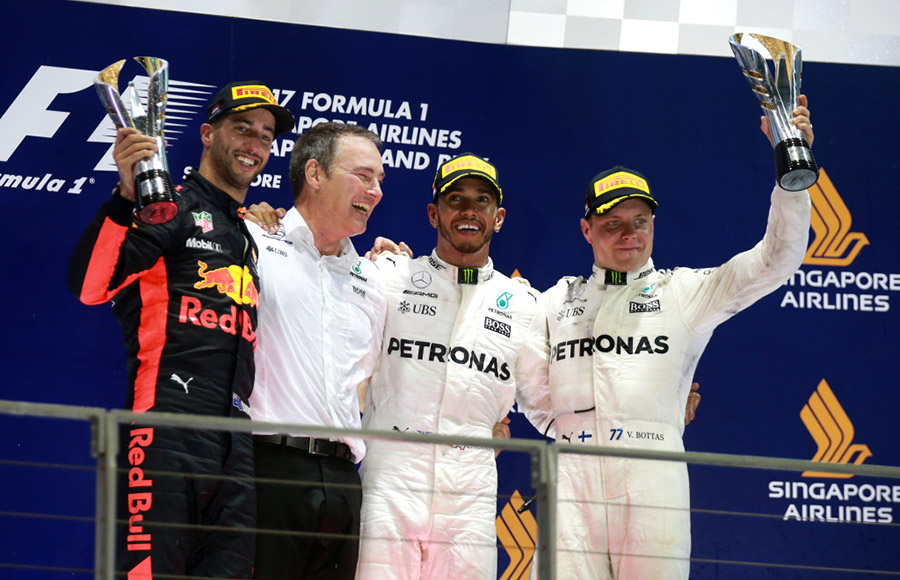 “We woke up this morning talking about little else than damage limitation; we leave Singapore this evening with a bigger lead in both championships. This was one of those days that reminds you what an unbelievable sport motor racing can be. And reminds you, too, that the points are only scored on Sunday. Of course, it goes without saying that we got a big slice of luck today. Not only did we avoid the chaos at Turn One but we also escaped without damage to both cars. After that, though, we had to make the most of the opportunity that had been presented to us – and out-race a very fast Red Bull. Lewis did that brilliantly, showing good race pace on both types of tyre, while Valtteri picked his way back through the field to the podium. So the emotions tonight are very different to what we felt 24 hours ago – but this result doesn’t change a thing in the big picture. If anything, it’s a stark reminder that there are six more opportunities for the luck to go against us this season, just as it happened to Ferrari today. We will celebrate our result this evening but, after that, it will be full focus on the next challenges ahead.” 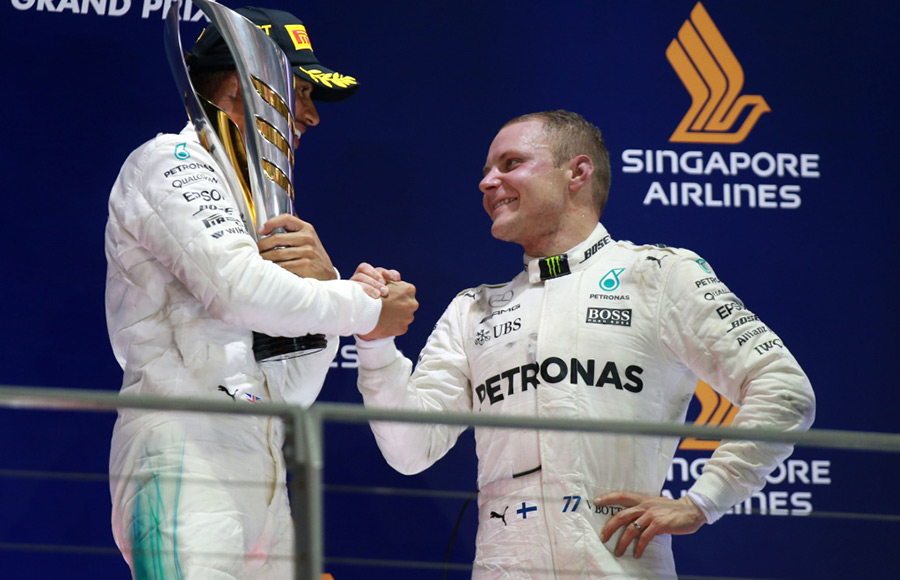 “In the two weeks since the last round of the championship, and in all the hundreds of hours worked and thousands of simulations made, nothing pointed to a result quite like this one. Formula One is incredibly complicated, but days like this remind you that it is still a sport – and that you never know what might happen. After a difficult weekend prior to Sunday, the manner in which the cards all fell so right for us in the opening corners gave us a massive lift. But after that huge dose of luck, it was a relief to show that we had good race pace to justify our good fortune, and we couldn’t be more delighted with the way Lewis and Valtteri made the most of it. This is a brilliant result for both titles and, of course, we leave Singapore with a spring in our step. But there is still a very long way to go in this championship race.”