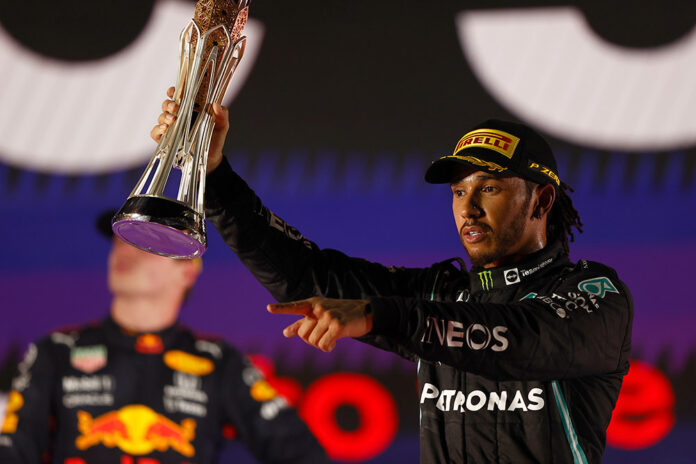 Lewis secures a dramatic victory for the Mercedes-AMG Petronas F1 Team in the inaugural Saudi Arabian Grand Prix with Valtteri clinching a sensational P3 on the line.

I’ve been racing a long time but that was incredibly tough – I tried to be as sensible and as tough as I could be out there but also sensible with all my race experience over the years, just keeping the car on track and staying clean. It was difficult but we persevered as a Team. We’ve had all sorts of things thrown at us in the second half of this season so I’m just really proud of everyone. I’m really grateful for the crowd we’ve had this weekend – it’s nice to be here.

We’ve done an amazing job with what we have this weekend, Valtteri did a great job today to get big points for the Team – this is for all the guys and girls back at the factory. It’s been an amazing event! I felt very welcome here, the people have been lovely and the track is phenomenal to drive, very difficult physically and mentally, but you wouldn’t want it any other way. So, on to the next one!

It wasn’t an easy day, there were so many obstacles with the red flags and all the incidents, it made it a bit tricky. I just kept pushing, it was tough to overtake today but I finally got to P3 on the final straight – it was such a nice feeling to get the podium that way. Esteban drove great today, he was difficult to pass but I hung in there for an exciting finish. Good for team points today, and great that Lewis and Max are level on points, we have an incredible weekend ahead in Abu Dhabi!

Winning the race today, in such a dramatic way, I think Lewis deserved it. We could have been out a few times with a broken front wing – it was a spectacular race, if not necessarily a good one. We obviously had frustration at the beginning with the red flag but today was a difficult race to manage for Race Control – when is a virtual safety car is called, when is a safety car called, when is a red flag? It’s so tough, and I’ll reserve judgement until I watch the race back tomorrow.

Both our drivers kept their cool heads, and kept pushing and pushing. Lewis drove so intelligently and with patience. Valtteri made a great comeback and to take P3 on his 100th race for Mercedes is just brilliant, a big haul of points for the team. At the end it’s all going down to the wire, that’s how the sport should be and we love it!

We came in this morning expecting an eventful race but didn’t see that coming. Firstly, well done to the team and drivers; it’s been the most challenging weekend we’ve had for a long time but great to come away with a win and both drivers on the podium. It was very encouraging to see how strong the car was in the race today, we were left a little deflated after qualifying having seen the pace of the Red Bull on a single lap. However, it seemed that the gap shifted in our favour today and Lewis was able to easily control the gap in stint one.

The safety car followed by the red flag put us on the back foot and with all the interruptions, we’d lost temperature in the tyres for each restart but in the long run, the Hard tyre was the right choice for Lewis, allowing him to attack towards the end. Valtteri did a fantastic job to get that podium place right at the end, we selected the Medium to give him better grip at the second restart but it wasn’t as strong on the long run which made that pass on the final lap even more of an achievement. Now our focus shifts to Abu Dhabi, today reminded us just how unpredictable the sport can be and we can’t carry an ounce of complacency into next weekend. But if we can get the car working as well there as we have done in the last three races then everything is possible.