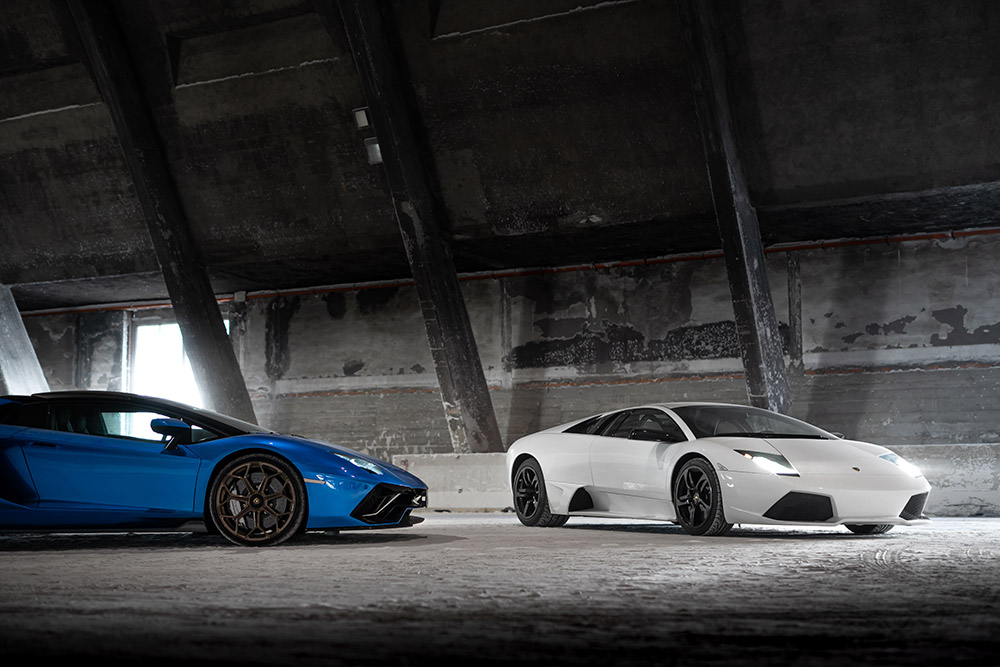 In 2022 Lamborghini is celebrating the V12: the legendary 12-cylinder engine that has powered its most iconic models for almost 60 years. Among these is the Murciélago, the Lamborghini model which, making its first appearance at the Frankfurt Motor Show in September 2001, had the task of taking the historical V12 engine into the 21st century. And it did this in the most extraordinary way, given that when this model made its debut, the 6.2-liter engine had a maximum power output of 580 HP. This was extremely high, considering the use of the large catalytic converters required for the car to be approved in all world markets, including the most stringent ones in terms of emissions.

The Murciélago was the first Lamborghini to be entirely designed using the CAD-CAM system, which guarantees design precision of the highest level and allows a significantly higher quality of assembly and finish. In terms of look, the Murciélago took shape in its entirety within the new design department, the Lamborghini Centro Stile, under the direction of Luc Donckerwolke who had already redesigned the Diablo but who, with the Murciélago, had the rare privilege of starting with a clean sheet for the design of both the bodywork and the interiors. The total height was just 120 centimeters and the distinctive hallmark “scissor doors” were retained.

The evolution of the 12-cylinder engine

When it was first created, the Murciélago came in just one hard-top version with a 6.2-liter engine delivering 580 HP at 7200 rpm. Thanks to the dry-sump lubrication, the Murciélago engine was positioned five centimeters lower than that of the Diablo, with clear benefits in terms of drivability. It could reach a maximum speed of 330 km/h and went from 0 to 100 in 3.8 seconds.

All Murciélago models are all-wheel drive, with the system borrowed directly from that of the Diablo, with the Ferguson viscous coupling differential capable of distributing torque up to a maximum of 70% at the rear and 30% at the front.  The carbon fiber undercarriage with mixed-structure floor panel with aluminum was, at the time, the most rigid supporting structure ever produced by Lamborghini. The chassis was completely revised, with new suspension and geometry.

The Murciélago was the last Lamborghini V12 to come with a mechanical transmission, in this case, six-speed with reverse. Later, the manual transmission was complemented by an electronic automated transmission with gear sequence via levers located behind the steering wheel.

In 2004, the Murciélago debuted on the racing track with the R-GT, developed for the GT World Championship, held under the banner of the FIA and the ACO for the Japanese championship. Nine cars were assembled, all rear-wheel drive, significantly lighter due to the almost-total use of carbon fiber materials, and equipped with larger tires and brakes.

The legend of the name

As is tradition, Lamborghini chooses the names of its models from the world of bullfighting. In the case of the Murciélago, Spanish for “bat”, legend has it that a bull with this name who survived the bullring was gifted to Don Antonio Miura, and that it was from this animal that the famous breeder bred his Miura bulls. In reality, there is no evidence supporting this legend, and there are some discrepancies in the timeline.

The Murciélago was also produced in some limited series, starting from 2003 with the celebrations for the 40th Anniversary of Automobili Lamborghini, with 50 units. The 40th Anniversary model is recognizable by the special “Verde Artemis” color, some external carbon fiber details and revamped wheel rims, an upgraded exhaust and numbered plate mounted inside the specially designed leather upholstered cockpit.

The Murciélago LP 640 Versace, available in only two colors, black and white, made its debut in 2006. Lamborghini Ad Personam and Versace designers created a special design, with a two-interior and a matching set of luggage, also produced by Versace. Special accessories, including a scarf and driving shoes, both with Versace branding, were designed to complement the model.

Dedicated exclusively to the Chinese market, just ten units of the 670-4 SV “China Limited Edition” were produced. It is recognizable by the stripe running along the hood and roof.

In February 2002, Lamborghini took a Murciélago to the test track in Nardò, Puglia, in an attempt to set a new world speed record for a standard production car. At the wheel was test driver Giorgio Sanna, today the Head of Lamborghini Squadra Corse. The goal was accomplished, despite the unexpected tire change during the fuel stop, with 305.048 km (189.55 miles) traveled in one hour and with an average speed on the fastest lap of 325.98 km/h (202.55 mph). The records over 100 km and 100 miles were also broken.

Scores of films and music videos have featured the Murciélago in a variety of roles. Without doubt, the most famous is Batman Begins in 2005, where it was used as Bruce Wayne/Batman’s personal car, with actor Christian Bale in the leading role. The Murciélago’s career in video games is extraordinary, where it has been used in Gran Turismo 7, Forza Horizon (versions 1-2-3-4), Asphalt 7, Drive Club, and Horizon Chase.

The “pure” Lamborghini V12 combustion engine in its final form will go out of production before the end of 2022, when the last Aventador Ultimae[1] is made. From next year, the successor to the Aventador will be fitted with a new plug-in hybrid version of the V12 engine.

Unique 1968 Lamborghini Miura Roadster on Display at the MUDETEC in Sant’Agata B...

An Exclusive Ad Personam Ultimae Roadster Created in Homage to the Unique Miura ...