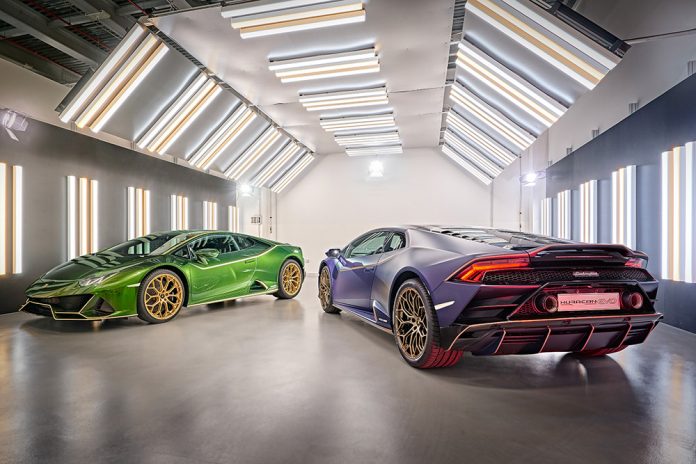 Lamborghini’s first showroom in Mexico opened in 2010 in the heart of Mexico City. Lamborghini has since seen great success and expanded its presence in the region with another dealership in Monterrey in northern Mexico. To commemorate the brand’s now decade-long presence, Lamborghini Mexico commissioned four special edition models—each of the V10 super sports cars were configured using a vast array of color and finishes, and fastened with a celebratory plaque symbolizing each theme on each vehicle’s firewall.

“Mexico has become an influential force for a growing automotive community in Latin America and we’re proud to celebrate this partnership with Grand Chelem. The four special edition models designed with the brand’s Ad Personam program present the endless possibilities available to clients when configuring their own Lamborghini vehicle.” – Federico Foschini, Automobili Lamborghini Chief Marketing and Sales Officer

Edición Vita (Life) – Vita, the series’ flagship model, is colored in a special shade of Verde Ermes (green) and Oro Elios (gold) accents representing life and nature. The exterior design is contrasted with fine Oro Elios (gold) details inside, symbolized by the sun to enhance the trims and stitching.

The Lamborghini Huracán EVO Vita Edition, symbolized with an emblem of an eagle, celebrates freedom and the successes in life, and perpetuated in a motif that exalts the national values of Mexico and Italy.

Edición Morte (Death) – The Lamborghini Huracán EVO Morte Edition, symbolized by the emblem of a skull, celebrates the experiences that prepare us for the journey between life and death.

A Blu Astraeus (blue) color bathes the vehicle’s exterior, complemented with Bronzo Serse  design accents. A similar configuration is extended inside the car, with seats and trims in Blu Teia Vintage (blue) and bronze stitching.

Edición Sogno (Dream) – The most distinctive of the four special edition models, the Sogno Edition incorporates a Blu Symi (light blue) exterior with Oro Elios (gold) highlights. The vibrant colors resemble the mythical-like creatures seen in Mexican folk art. To emphasize this bold expression, the interior sees a two-tone configuration. Inside, the white accents are contrasted with the predominantly black tones of the center console and the gold stitching on the seats.

The Lamborghini Huracán Sogno Edition, commemorated with a plaque of a two-headed dragon, celebrates dreams with a mixture of fantasy and reality that give color and meaning to life.

Edición Tempo (Time) – The Lamborghini Huracán EVO Tempo Edition, the final model in the series, represents the decade-long partnership between Lamborghini and Mexico. It is symbolized with a plaque of a snake, representative of the reinvention of oneself by the shedding of skin.

A Nero Nemesis (black) exterior is accentuated with Bronzo Serse underlines, while the interior sees predominantly dark hues with bronze accents around the seats, trim and stitching.