The awe-inspiring collection of John Atzbach—highlighted most notably by the first 1965 Shelby GT350R Competition Model built, known as the “Flying Mustang”—was announced today by Mecum Auctions as an offering that will serve as the headlining main att … 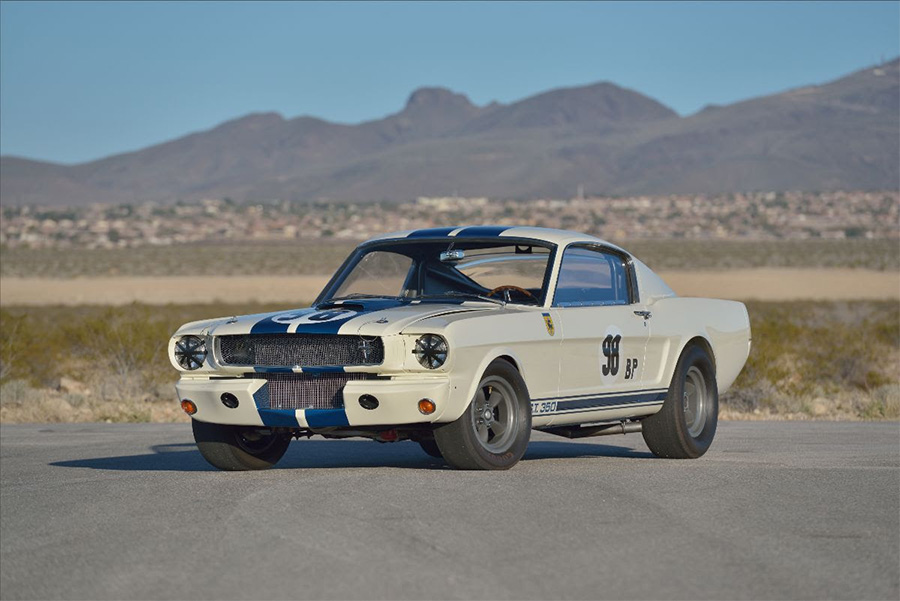 The awe-inspiring collection of John Atzbach—highlighted most notably by the first 1965 Shelby GT350R Competition Model built, known as the “Flying Mustang”—was announced today by Mecum Auctions as an offering that will serve as the headlining main attraction of Dana Mecum’s 33rd Original Spring Classic, to be held at the Indiana State Fairgrounds in Indianapolis this May 12-17. Mecum Auctions believes that records are made to be broken. Over the last two years, the world has borne witness to two momentous, record-breaking sales of Ford Mustangs with the $2.2 million sale of the 1967 Shelby Super Snake at Mecum Kissimmee 2019 followed by the $3.74 million sale of the Bullitt Mustang at Mecum Kissimmee 2020. In May of this year, all eyes will be on the iconic Mecum Indy sale where the auction house intends to raise the bar once again.

Unveiled in a dramatic fashion to open Mecum’s Glendale, Arizona, auction, now underway, Atzbach’s GT350R is the very car that was piloted by the legendary Ken Miles at Green Valley Raceway on Feb. 14, 1965. This marked the first time any Shelby Mustang was entered into a sanctioned competitive event. Amazingly, Miles took the car to a dominating first-place finish and, en route to the win, was captured in one of motorsports history’s most memorable photos showing Miles and the Mustang airborne with all four tires of the car lifted clear off the ground. The first competition Shelby Mustang, the first to be raced, and the first to win, 5R002 simultaneously served as Shelby American’s factory engineering mule, a rolling test bed for ideas and components, including those that would constitute both the second team car (5R001) and all 34 customer R-models. Ken Miles, Bob Bondurant, Chuck Cantwell, Peter Brock, Jerry Titus and several other world-class drivers drove this car extensively in testing and development. In fact, Titus would not have earned the 1965 B-Production SCCA National Championship title had it not been for his early victories throughout the year in 5R002. Indeed, after 5R002 entered and won that first historic race, it paved the way for the rest of Carroll Shelby’s GT350s to dominate their class across both North America and Europe, giving rise to the Shelby name and motoring legacy while drastically altering the public perception of the Mustang forever.

5R002 is an automobile so historically significant that accurately and completely summarizing its eminence can be difficult because of the many reasons for which it is important. To simplify, 5R002 is The Ken Miles R-Model. Few, if any, cars are so intertwined with the legendary and essentially mythical figure that is Ken Miles. Today, Miles is revered as one of the greatest figures in racing that the world has ever known, one who tragically died at the height of his career. 5R002 stands today as one of the most significant and historic competition cars ever constructed by Shelby American Inc. The car represents a legendary convergence of a chicken farmer from Texas, a gang of Southern California Hot Rodders ready to take the fight to the Corvette, a driver the likes of which we may never see again and a “secretary’s car” that thought it could fly.

Atzbach is well-known in the collector car hobby and prolifically recognized as an authority on all things Shelby; his memorabilia collection is—without any doubt—the most extensive and encompassing assemblage of Shelby artifacts known to exist, while the cars offered represent an array of the most historic and significant Shelby Mustangs available anywhere on the market in many years, possibly ever. A total of 12 vehicles are slated to cross the block as part of the Atzbach Indy 2020 auction offering, and the group encompasses nine other incredibly rare Shelby Mustangs—including the only production factory supercharged 1965 GT350, the first production 1966 GT350, a factory supercharged 1966 GT350, the first 1966 GT350 convertible and the final 1970 Shelby GT350. Outside of the Shelby Mustangs, the collection is rounded off by a superb example of an independent competition 289 Cobra and two Lamborghinis. His Road Art collection comprises approximately 15,000 items ranging from rare Shelby artifacts to original and authentic vintage automotive signs and collectibles.

Hilton & Moss Offer an Exceptional Race-Prepared Example of the 1966 Shelby...