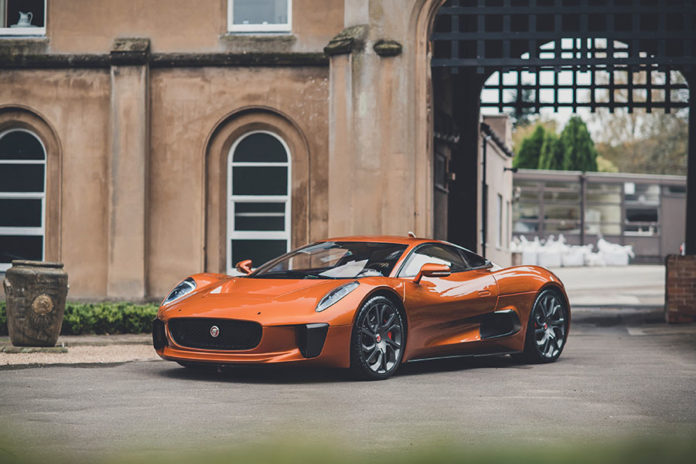 For over fifty years, the James Bond film franchise has served as an unparalleled stage for some of the world’s leading sports car manufacturers to showcase their greatest products. While this has most famously consisted of the Aston Martins driven by James Bond himself, it has also included an array of other makes, including those driven by the superspy’s nemeses. From the winged AMC Matador of The Man with the Golden Gun and the sideview-mirror blow-dart-shooting Chevy ‘Corvorado’ of Live and Let Die, to the machine-gun-equipped Jaguar XKR of Die Another Day, the Bond films have featured an incredible array of gadget-laden vehicles. 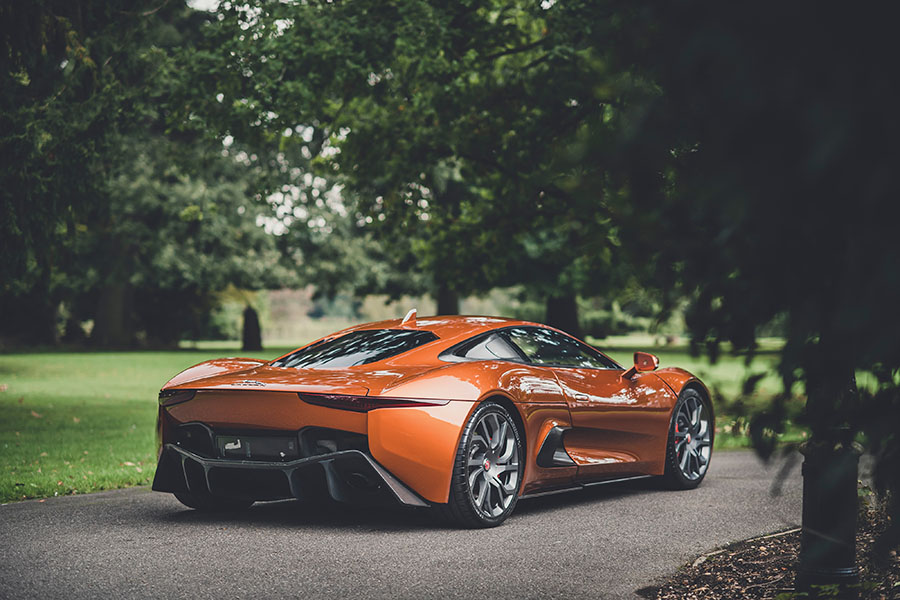 The 2015 release Spectre, in which Daniel Craig’s James Bond faces the terrorist organization that proved to be his most prominent foe, was no exception. Midway through the film, the assassin character Mr Hinx (played by ex-wrestler and Marvel Cinematic Universe superstar Dave Bautista) is dispatched to do away with the irksome Bond, and a fantastic chase sequence ensues through the cobbled streets of Rome. While Bond drove an Aston Martin DB10 specifically designed for the film, Hinx piloted an exotic rear-engine supercar that automotive enthusiasts no doubt recognized as the Jaguar C-X75 concept car. 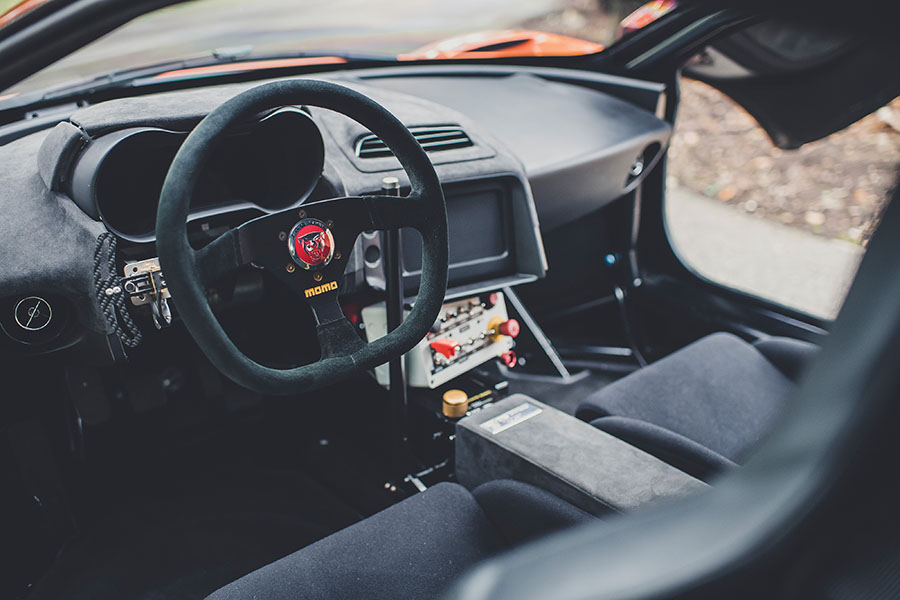 The C-X75 had originally debuted five years earlier at the Paris Salon, envisioned as a gas turbine-powered all-wheel-drive electric car wrapped in a slippery carbon-fiber-reinforced exterior penned by Ian Callum’s team at Jaguar Design. Phenomenally sleek and attractive, the concept received immediate customer interest, and Jaguar eventually modified the power train to a more standard hybrid-electric configuration with an inline four-cylinder gasoline engine. Viewed as a potential competitor to hybrid supercars like the Porsche 918, the McLaren P1, and the Ferrari LaFerrari, the C-X75 was approved for a limited production of 250 units to be built in conjunction with Jaguar SVO and Williams Advanced Engineering (a division of the well-known Formula 1 concern). Unfortunately, the program was cancelled in late 2012 after only five examples were built. 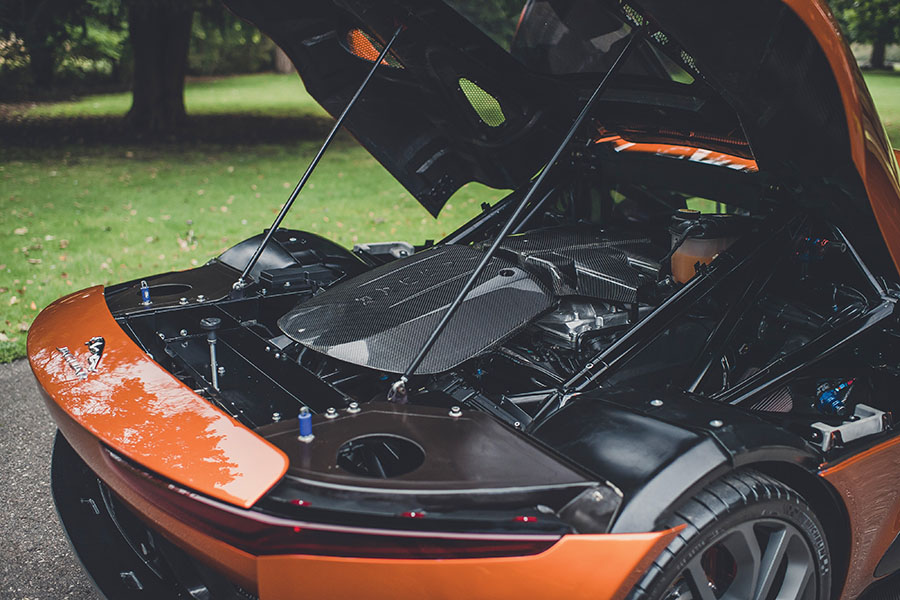 Two years later, however, the C-X75 received a temporary lifeline from the producers of Spectre, who sought a unique and menacing speed machine to accommodate the equally intimidating Mr Hinx. Williams Advanced Engineering was commissioned to build six new cars for use in the chase sequence, but the rigours of the scene necessitated significant deviations from the original design. As the cars were planned to drive onto sidewalks and speed down the embankments of the Tiber River, they required a much sturdier build than a production car, so Williams began with a tubular spaceframe made of extrathick steel tubing. Numerous World Rally Championship specifications were embraced, including extra-travel suspension. 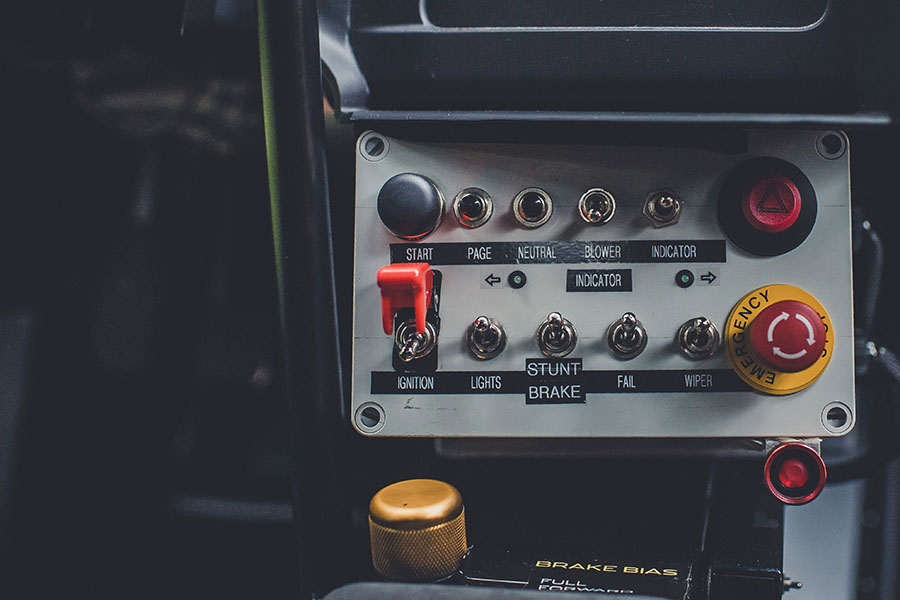 A dry-sump version of the prodigious V-8 engine used in the F-Type was installed behind the driver’s seat and mated to a Ricardo short-travel six-speed transaxle. The all-wheel-drive architecture of the prototype was changed to rear-wheel power delivery, which was transmitted via a mechanical limited-slip differential. Gearchanges were executed with a left-hand-only single sequential paddle shifter, and a hydraulic handbrake was mounted in front of the centre console for easily executed drifts. This was a car designed to be thrown around the streets of Rome with extreme burnouts, and the platform initially proved to be so ferocious that the engine was reprogrammed with torque limiting for improved driver control. 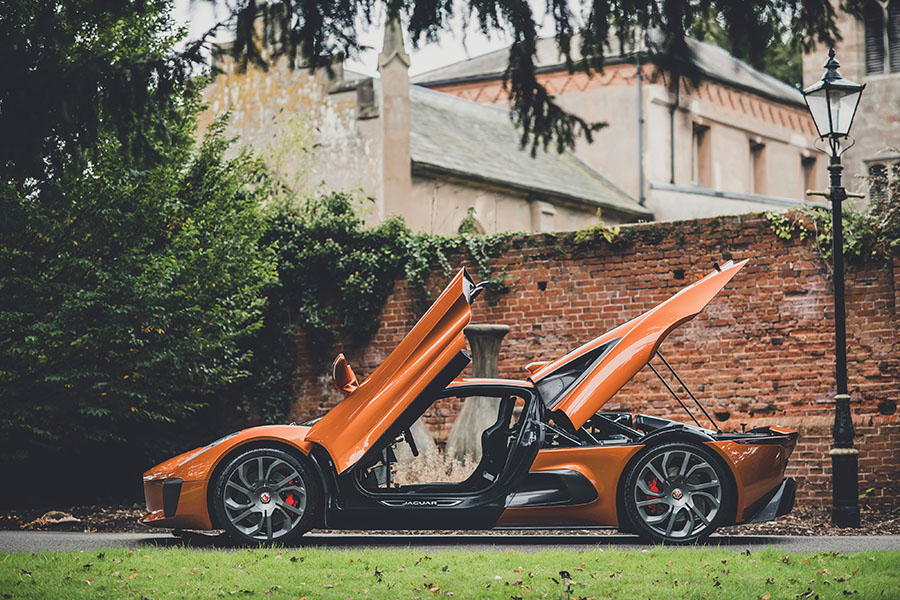 Williams built four such cars (along with two ‘standard’ versions) to serve in various roles in the single chase scene, including one modified to be fireproof, as Mr Hinx’s demise would come at the means of a flamethrower shot from the rear of Bond’s DB10. Chassis no. 24001 is the first of the four stunt cars built and served as a ‘pod car’. In order for the actors to focus on their reactions and facial close-ups, driving duties for such shots were relegated to a secondary pilot who sat in a pod mounted on the roof. Because it served in this capacity, this stunt C-X75 endured far less brutal driving than the other three stunt cars, though all of them survived the shoot, a tribute to Williams’s build quality. 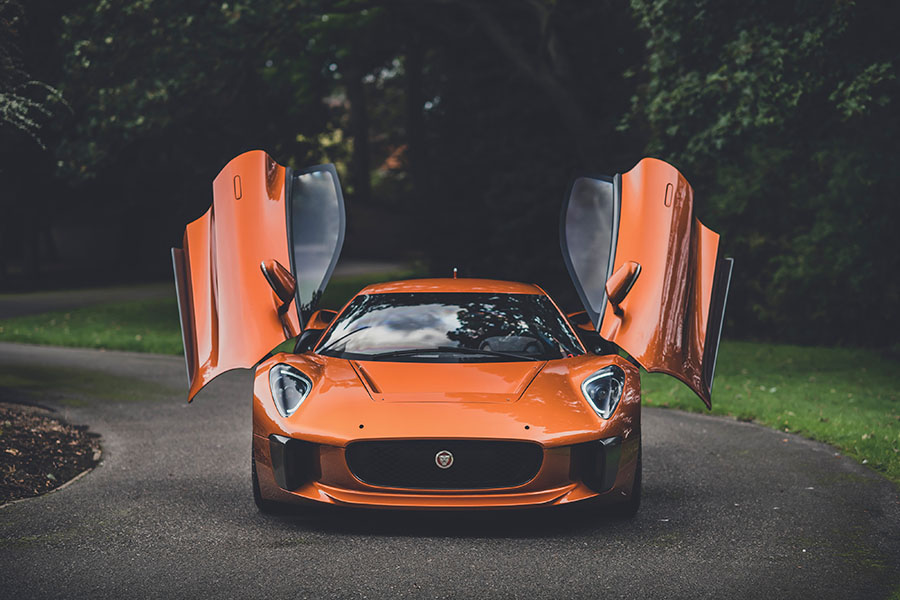 Following filming, the cars were returned to Williams and serviced and refitted with parts as needed, and this car’s V-8 engine was completely rebuilt. Chassis no. 24001 was then utilized for Spectre promotions, even being shipped to Mexico in late 2015 for an appearance at the Mexican Grand Prix. The Williams-Martini team driver Felipe Massa then test-drove the C-X75 to his heart’s content, demonstrating how easily the stunt car could be pushed into slides and leave rubber doughnuts on the tarmac. 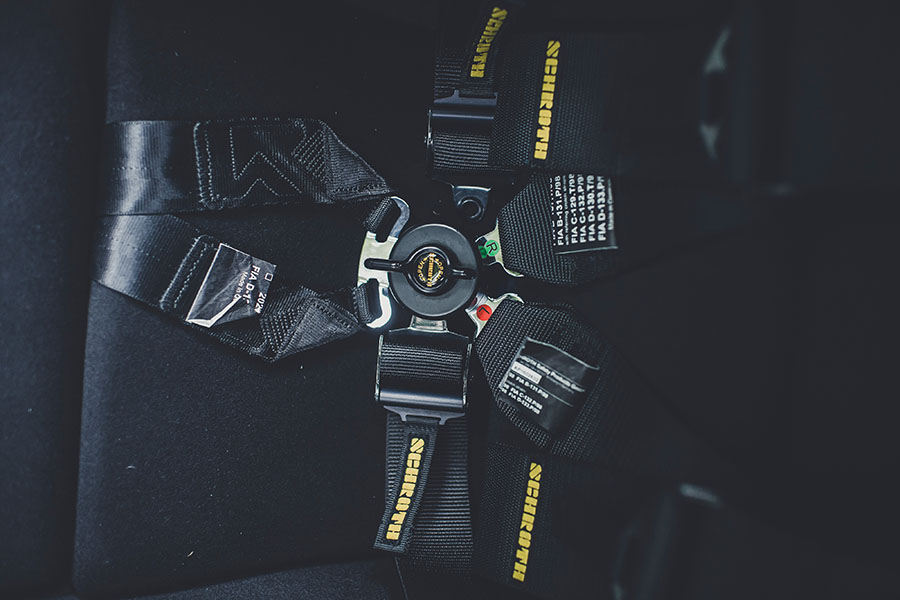 In May 2016 Jaguar sold the C-X75 to the consignor, a British collector who had served as a consultant to the manufacturer and therefore received personal consideration. The car has only been gently driven since, accruing a handful of miles while being displayed at a small number of events, including twice at the Chateau Impney Hill Climb, once at the Shelsley Walsh hillclimb, and once each at the esteemed Salon Privé Concours d’Elegance and the 2019 Silverstone Classic. 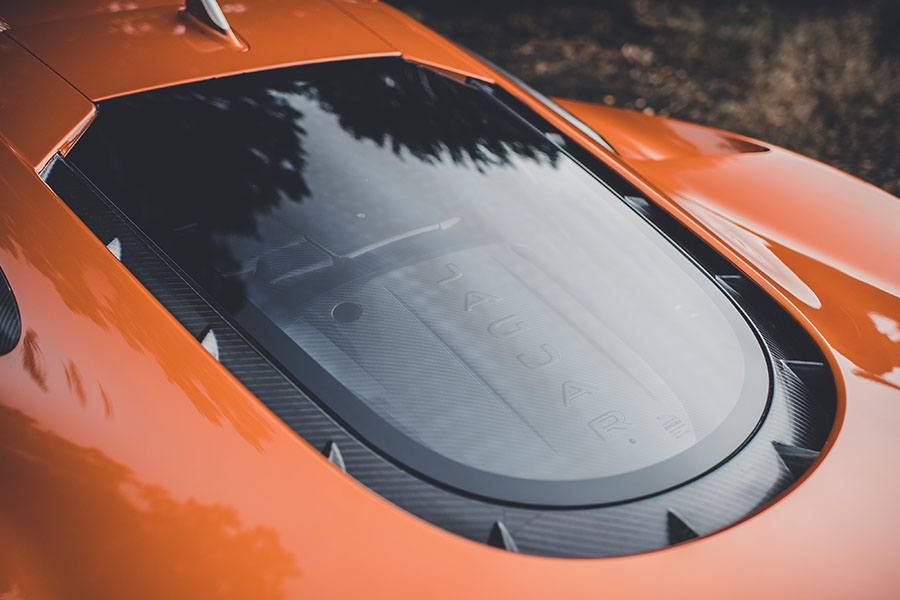 This James Bond film car is the rawest expression of the C-X75, a remarkable model that never saw full production, and may be considered a spiritual stablemate of such rare Jaguars as the XKSS and XJ13. The car has recently been serviced at Williams as needed, including the installation of a new clutch. The interior remains fascinatingly unfinished, lacking panelling and upholstery, but still fitted with Recaro sport seats, the hydraulic handbrake, and a host of race-car-style dash buttons, including a knob to adjust the AP Racing brakes. Documented with a Bill of Sale including an SVO spec sheet and a copy of the Spectre production call sheet for filming, this unique C-X75 offers an unparalleled opportunity to acquire one of Jaguar’s rarest and most inspiring creations, complete with the provenance of use in the legendary James Bond franchise.

The question ‘what’s the best an E-Type can be’ has been answered by Eagle.
Read more
Auction Block