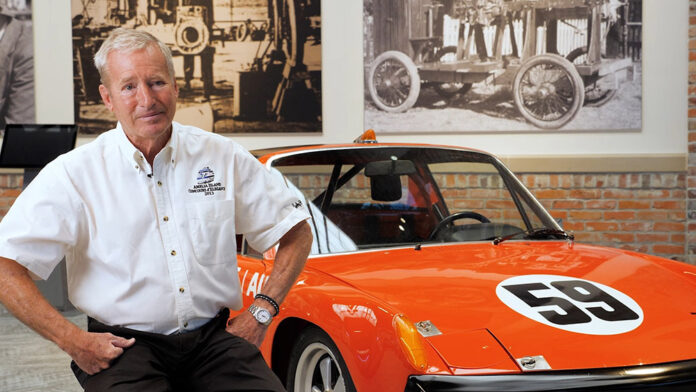 Commemorating the 50th anniversary of his first championship–the 1971 IMSA title he earned with teammate Peter Gregg, motorsports icon Hurley Haywood shares memories of his historic racing career in the newest installment of The Brumos Collection’s “Inside The 59.” The video series connects a global audience of motorsports enthusiasts with the treasured vehicles and prominent individuals that for decades have symbolized with the Brumos brand.

Posting to Brumos Collection social channels today, “Conversations With Hurley Haywood” recaptures moments of his brilliant career, with insight about the vital role the Brumos brand played on his journey to racing immortality.

Culminating with his Motorsports Hall of Fame induction in 2005, Haywood earned five overall victories at the Rolex 24 at Daytona, three at the 24 Hours of Le Mans and two at the 12 Hours of Sebring. He is credited with the 1988 Trans-Am title, two IMSA GT Championships and 23 wins, three Norelco Cup championships, a SuperCar title and 18 IndyCar starts.

Fittingly, Haywood recaptures several of those successes, sharing his memories and perspectives while seated beside some of the Brumos racecars he drove to many of those checkered flag finishes. His mid-engine 1971 Porsche 914-6 GT, he recalls, “was very nimble, easy to drive and had great resilience.  Racing against equipment that was much faster than ours, we won because of durability and planning.  This was my first year of racing, so it was quite a learning process.”

Two years later led to Can-Am competition and a transition to the imposing Porsche 917.  “Switching from the 300 hp Porsche 914 to 1200 hp 917 was a huge leap for me, at only 24 years old and in just my third year of racing,” he says, remembering the 917 for its “tremendous acceleration and huge downforce.”

Haywood attributes his racing success can be attributed to his ability to master some rudimentary practices that he learned early in what would become a historic life in motorsports. “The most important thing a driver can do is focus on vision. Your eyes tell your hands and feet what to do,” he explains.  “Patience is also extremely important. Racing is like chess: every move you make is calculated to a risk/reward. You have to learn how to evaluate a condition and make the proper adjustments to be successful.”

His accomplishments, like those of other Brumos drivers, is proudly displayed at the stunning Collection, which was unveiled 14 months ago.  “There is really no other facility that allows you to get so close to the cars that you can almost smell their heritage,” Haywood says.  “I’ve noticed that when people come into this building, they understand why Brumos is such a revered name, a standard bearer of excellence, and so critically important to the reason we’ve won so many championships.

Haywood’s interview on “Inside The 59” can be accessed via The Brumos Collection social channels:

A Unique Setting
In 1924, 16 years after the first Ford Model-T was produced, Henry Ford expanded production to a newly commissioned 165,000 square-foot plant in Jacksonville, Florida. The Brumos Collection is housed in a purpose-built facility whose meticulous design pays distinct homage to this part of Jacksonville’s automotive history.

About The Brumos Collection
From the moment guests enter the grounds, carefully crafted design details honor auto racing history. The guard rails along the roadways are reminiscent of the guard rails you would have found racing along the tracks of a bygone era; a board track walkway leads to the building entrance, and the surrounding brickwork pays tribute to the legendary Indianapolis Motor Speedway “Brickyard.” For more comprehensive information, please visit: www.thebrumoscollection.com.

Previous articleNow You Can Drive A Porsche Taycan for a Day, a Week, or a Even Month
Next articleFirst Production 2021 Ram 1500 TRX Auctioned for $410,000 at Barrett-Jackson Scottsdale