One of Just 17 “Homologation” Porsche Carrera RS 2.7 RSH’s Has Hit the Market with RM Private Sales 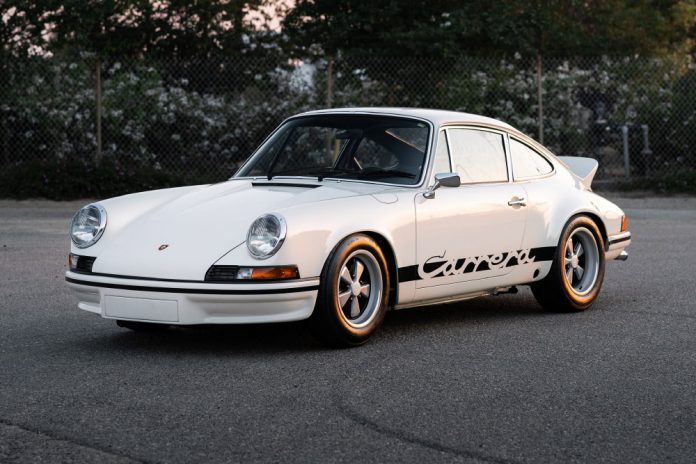 Amongst Porsche cognoscenti, there are just two models from this storied marque’s 70-year history that are truly iconic: the revered 356 Speedster of 1954–1958, and the 911 Carrera RS of 1973. We are pleased to offer here one of the finest and rarest examples of the latter.

After the FIA abolished the five-liter prototype category which had been utterly dominated by the Porsche 917 in the early 1970s, the German automaker sought another stage upon which to prove its racing mettle. It chose to enter the FIA’s Group 4 GT/Special Sports Car category, using the popular 911 S as a starting point. It would need to build and sell at least 500 units to qualify a 2.8-liter racing version for competition. The Carrera RS was based on a lightened and modified 1973 911 S platform. The bodywork was widened with front and rear fender flares to accommodate larger wheels and tires; Lightweights and many Touring versions were fitted with thinner-gauge body panels and glass, and the suspension was upgraded. The RS’s signature feature was its fiberglass Bürzel, or “ducktail” engine lid spoiler, which had been proven in wind-tunnel testing to reduce rear-end lift at higher speeds. The front and rear fascias were made of fiberglass as well, although most Touring models had steel rear body panels.

When the Carrera RS was introduced at the 1972 Paris Auto Show, all 500 Touring and Sport (Lightweight) cars quickly sold out. A second series of 500 cars, and then a third, were also snapped up in spite of being assigned substantially higher retail prices. Eventually a total of 1,525 examples of the RS were produced; 200 of which were M471 Lightweights, 1,308 M472 Touring versions, and just 17 RSHs (homologation models), of which the car offered here is one. Another 55 were completed as full-on RSR racing cars.

The uprated Type 911/83 2.7-liter engine is the heart of the Carrera RS. Based on the production Type 911/53 2.4-liter powerplant of the 911 S, it utilized new 90-mm Nikasil-coated barrels which offered improved wear and lubrication characteristics. With an 8.1 compression ratio, this magnesium-cased engine produced a reliable 210 bhp at 6,300 rpm with Bosch mechanical fuel injection. Torque was a healthy 188 foot-pounds at 5,100 rpm. To handle the increased output, Porsche replaced the early-style Type 901 “dog-leg” five-speed transmission with the stronger Type 915. Performance was brilliant, with the RS 2.7 (as it was soon dubbed) offering a very impressive top speed of about 150 mph.

According to the car’s Certificate of Authenticity, this stunning Light Ivory over black third-series RSH was completed in May 1973 and delivered to Ben Pon’s Automobielhandel BV distributorship in Amersfoort, Holland, on 1 June. Pon, who enjoyed a long working relationship with Hermosa Beach, California, Porsche dealer Vasek Polak, shipped the car to Los Angeles. Polak sold this RS to a customer in Texas, who reportedly defaulted on the purchase loan, after which the bank repossessed the car. It soon found a new owner in John Paul Sr., who retained the car for some time, with his son, John Paul Jr., entering it in autocrosses. It was also raced a few times.

The Carrera’s next owner was the late Tom Anderson, owner of Carrera Motors, a Porsche dealership in Bend, Oregon. Anderson traded the car to noted Portland, Oregon, racer and auto dealer Monte Shelton in exchange for a 934. Around 1985, Shelton sold this RSH to another Oregon Porsche collector and racer, Mark Heininge, who embarked on a full restoration. Heininge says the car was in excellent, rust-free condition with its original lighting units, including Bosch H1 dual-bulb headlights. It also retained its thinner Glaverbel rear quarter glass.

Because the engine in this car is stamped with the prefix 633 rather than the 663 normally assigned to the RS, Heininge suspected a factory stamping error, since the engine series number (1355) corresponded properly with the RS 2.7 production run. A lengthy exchange with the factory ensued, with Porsche’s Olaf Lang agreeing that a mistake must have been made when the engine was built. However, a homologation document emerged dated 5 May 1973, and it indicated otherwise. Based on that documentation, the factory changed the engine case material from magnesium to aluminum alloy late in the production run, prompting a change in the part number prefix. A copy of the FIA acceptance document, dated May of 1973, is included with this car.

Heininge says a previous owner had installed wider but incorrect ST 2.5-style flares to both the front fenders and rear quarters. To rectify the problem, expert restorer and fabricator Nate Cantwell from Connecticut recreated the car’s original wheel openings and flares. Rather than replace the front fenders, as they were original to the car, Cantwell used only the flare portions of the new fenders and butt-welded them to the original fenders. Likewise, a pair of OEM rear-quarter RS flares were meticulously butt-welded to the factory quarter panels. The bodywork became indistinguishable from new. The steel tub along with the fiberglass bumpers and engine cover were carefully stripped and repainted in the car’s original Light Ivory paint by Jim Nichols. Heininge commissioned a new headliner and lightweight carpet set and also acquired a rare NOS roll bar directly from Porsche.

Heininge says the car’s mechanicals were in great condition at the time of his purchase, but some freshening was carried out by Jeff Gamroth at Rothsport in Sherwood, Oregon, and Pat Hartmann at Hartmann Motors in Portland, Oregon. The original Fuchs alloy wheels, 7-in. wide in front and 8-in. in the rear, were properly refinished. The car also wears its correct lightweight black vinyl door cards and leather door release straps, and the glovebox door has been deleted, as on other factory Lightweights. In lieu of the usual cast metal Porsche hood badge, a simple Porsche decal appears.

Heininge enjoyed the car until 1995, entering it in the 40th Annual Porsche Parade in Portland where it starred in the Concours Historic Display. Seattle collector John McCaw purchased the Carrera and sent it to Bruce Canepa in Scotts Valley, California. There, this RSH was again comprehensively restored cosmetically and mechanically at considerable expense, as detailed in accompanying invoices. A new fuel cell was installed within the factory gas tank shell, as original units are no longer available.

Shortly afterwards, the car exchanged hands once more. Much like its last respected owner, the previous custodian sent chassis 1382 to marque expert, Phil Bagley at Klub Sport Racing in Riviera Beach, Florida, for freshening in 2016. A number of detail items were returned to original specification, including the chain tensioners, exhaust system, and some chassis and engine hardware. The RSH became part of the current owner’s collection in the summer of 2018 and it has been enjoyed by him for the past three years.

Surely in the lineage of the RS Porsche 911, certain models rise above others, and the RSH does just that. Its timeless design combined with an excellent driving experience, make this an exceptional car in all regards.