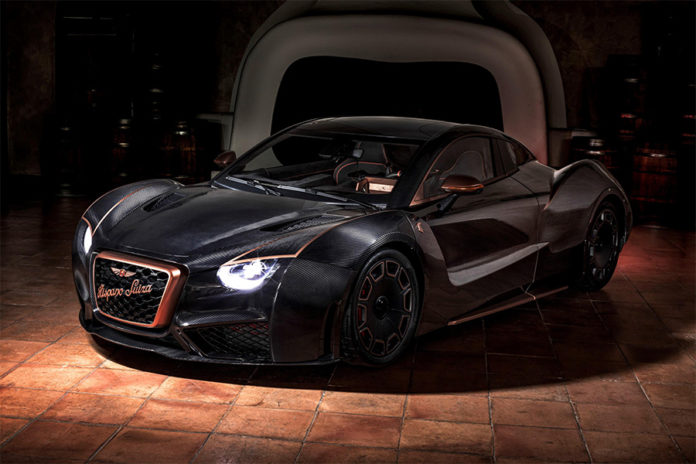 Born of the brand’s ‘Unique Tailormade’ department in Barcelona, the infinitely-customisable Carmen Boulogne embodies the sporting spirit of Hispano Suiza alongside a strong family legacy.

The new sportier variant of the Carmen is the next stage in the evolution of the resurgent Spanish luxury car brand. Designed, developed and manufactured in Barcelona, the fully-electric Carmen Boulogne shares its sibling’s classically-inspired design, but applies sportier styling and showcases the extent of customisation available to the five customers who will own one of the hyper-exclusive models.

Combining its enhanced, fully-electric 820kW (1,114PS) powertrain with a bespoke super-stiff carbon fibre monocoque, stiffer double-wishbone front and rear suspension, and torque vectoring, the Carmen Boulogne delivers exceptional dynamics, with a focus on thrilling performance. With such prodigious power, and a kerb weight of 1,630kg, the new variant has world-class performance capabilities: 100km/h is reached in under 2.6 seconds, while the top speed is 290km/h.

The car’s exquisitely-precise carbon fibre bodywork is proudly displayed beneath a clearcoat varnish, which emphasises its aggressive sportiness while retaining the Carmen’s timeless elegance. Inside, the Carmen Boulogne variant is distinguished from its sibling through the use of suede or black Alcantara across the bulkhead and door panels.

The car’s design, engineering and production has been undertaken in Barcelona by a skilled team of highly-experienced experts from Hispano Suiza and QEV Technologies – a company that specialises in electric powertrain development and motorsport engineering.

The Hispano Suiza Carmen Boulogne will cost from €1.65m (plus taxes). The five special edition Boulogne variants join 14 Carmen or Carmen customised models to complete the total 19-unit production run, with the first customer taking delivery in 2022. Prospective customers can now register their interest to purchase one of the hyper-exclusive models.

A product of the brand’s ‘Unique Tailormade’ operation, the Boulogne features design enhancements that reference Hispano Suiza’s racing vehicles from the 1920s, while building on the Carmen’s exhilarating performance and exceptional luxury.

The Boulogne moniker dates back to 1921 and the George Boillot Cup, in which Hispano Suiza competed with a performance-focused version of the company’s H6 Coupé. The endurance race saw competitors battle for victory for more than 3.5 hours, on the roads around the French town of Boulogne.

Hispano Suiza Carmen Boulogne: A Journey in the World of Automotive Hyper Luxury...

Becomes the first US customer for the Spanish brand in the modern era.
Read more
Automotive News