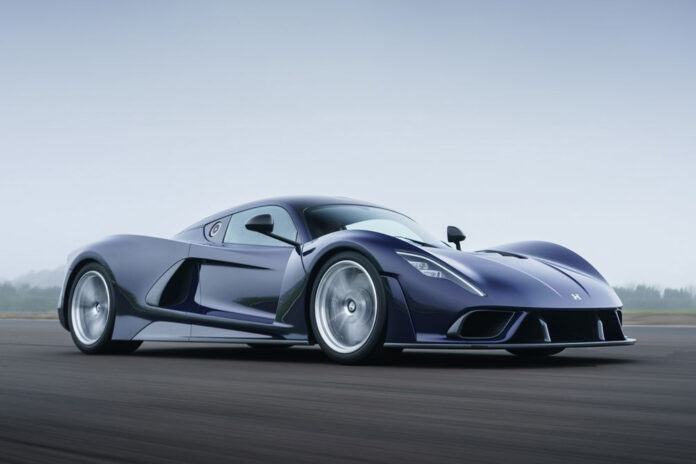 Hennessey Performance has unveiled the production version of its Venom F5 hypercar, ahead of customer deliveries in 2021 – the company’s 30th anniversary year. The all-new 100% bespoke Venom F5 is built to deliver the world’s most exhilarating all-round driving experience and unparalleled performance. With its immense power, low weight and meticulously honed dynamics, the F5 boasts extraordinary handling and a truly visceral experience behind the wheel.

Priced at $2.1 million dollars, just 24 ultra-exclusive versions of the Venom F5 will be produced with each example unique to its owner. The heart of the car is the Hennessey-built 6.6-litre twin-turbocharged V8 engine named ‘Fury’, which delivers 1,817HP at 8,000rpm and packs 1,617Nm (1,193lb-ft) of torque.

Deploying this unprecedented level of power in a car weighing just 1,360kg (2998lb) results in prodigious acceleration: 0-100kph (62mph) takes less than three seconds and it will smash a 0-200kph (124mph) run in under five seconds. As part of its validation, the F5 is targeting a top speed in excess of 500kph (311mph) and will prove this with a transparent and independently verified top speed run in 2021.

The Venom F5 project is overseen by company Founder and CEO John Hennessey, who has shaped every aspect of the car’s specification, design and development. John has combined knowledge from the company’s past 30 years of making fast cars faster with the highest levels of specialist engineering talent.

John Hennessey: “Our customers love speed, so we’re fired-up to push the boundaries of what’s possible to attempt the world’s fastest production car record, but the Venom F5 is about more than just speed and power. This car will handle superbly, quality is exceptional, there are more than 3,000 bespoke parts, materials are exquisite, everything is a fitting tribute to 30 years of the Hennessey brand.”

The Venom F5 is a symphony of mind-bending numbers, but that’s not the whole story. The car’s dynamics have been developed by Hennessey’s in-house dynamics guru – legendary US racing driver and vehicle set-up expert John ‘Heinrocket’ Heinricy. During the car’s development, his input will ensure that F5 offers a world-class all-round driving experience on road and track.

The F5’s status among the world’s greatest hypercars goes far beyond its world-leading performance figures. Its design, ultra-lightweight carbon fibre monocoque, premium quality and bespoke construction all place it at the pinnacle of global hypercars.

Underscoring this position at the peak of hypercar performance, the F5 will complete top speed testing in the first half of 2021 at the NASA Shuttle Landing Facility in Florida. Subsequent top speed run will follow an intense period of real-world development at Hennessey’s own testing facility, plus the Circuit of The Americas – with John Heinricy leading the development team and conducting the bulk of hands-on testing.

The F5 aims to exceed 500kph (311mph) on a two-way validated speed run using a production specification car. The record attempt will be independently verified by the world-renowned experts from Racelogic using VBOX GPS data acquisition systems. Racelogic / VBOX engineers will be on site to install, test and calibrate the speed testing equipment in the F5 to ensure absolute accuracy and transparency. In addition, VBOX engineers will verify all test data and final speed numbers. The speed test will be attended by independent witnesses, media guests and F5 customers. GPS data and uninterrupted video footage will also be made publicly available following the speed test.

Distilling 30 years of expertise, knowledge, and world-class engineering, the F5 is seen as the culmination of the Hennessey brand’s innovation and success. Additionally, it serves as a launch-pad for the next 30 years and is a significant leap forward for the company. The F5 marks the beginning of a new era of Hennessey vehicles designed to delight the driver and celebrate performance engineering.

NEW Hennessey Venom F5 Is Going To The NURBURGRING!