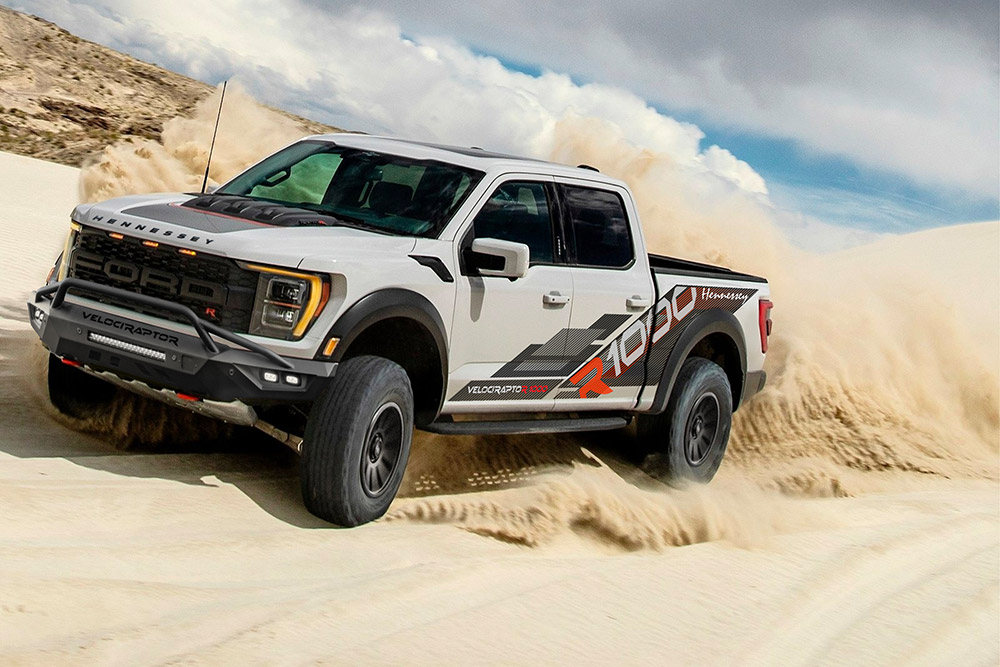 Hennessey, the Texas-based hypercar manufacturer and high-performance vehicle creator, has announced an engineering and development program for the new V8-powered Ford F-150 Raptor R. When it debuts in the first quarter of 2023, the ‘Hennessey VelociRaptoR 1000’ is anticipated to boast nearly 1,000 bhp and more than 850 lb-ft of torque – engine output that would make the adept off-road pick-up one of the quickest and most powerful in the world.

Boasting two more cylinders than the standard F-150 Raptor and fitted with a 2.65-liter supercharger as opposed to a twin-turbocharger configuration, the flagship Raptor R boasts Ford’s 5.2-litre ‘Predator’ V8 – with stock output rated at 700 hp. Hennessey’s engineers, obsessed with high-power combustion engines, plan to replace the stock blower with a larger 3.8-liter supercharger. It will be complemented with high-flow induction, larger fuel injectors, upgraded fuel lines, and a new supercharger belt. When the final calibration is complete, the result is expected to be a 40 percent increase in output.

With 30 years of experience in ‘making fast cars faster,’ Hennessey’s engineers have a solid process in place to fast-track vehicle R&D. The Predator V8 under the hood of the Raptor R shares architecture with that of the Ford Mustang GT500 – a vehicle that Hennessey reliably upgrades to more than 1,200 bhp. After fitting the larger supercharger, the team will calibrate and test using its in-house suite of dynos, plus perform extensive on and off-road evaluations at Hennessey’s testing facility. All this experience, research, development, and refinement will deliver a VelociRaptoR 1000 with manufacturer levels of quality and reliability, backed by a 2-year / 24,000-mile Hennessey warranty.

John Hennessey, company founder and CEO: “The Hennessey VelociRaptor is the world’s best-selling modified performance truck, of which we’ve built thousands for customers all around the globe. The VelociRaptoR 1000 raises the performance bar significantly in terms of sheer power. Add in the characteristic supercharger whine and the distinctive exhaust note from the unique cross-plane V8, and the package is unbeatable.”

In addition to the increased engine output, the VelociRaptoR 1000 will also feature exterior enhancements to boost its appearance and off-road capability. New front and rear VelociRaptor bumpers, a front LED light bar, 20-inch Hennessey wheels, and 37-inch off-road tires bring added road presence and boost its go-anywhere assurance. VelociRaptoR 1000 badging and a serial-numbered build plaque will identify the model as something extra special.

The new Hennessey VelociRaptoR 1000 is set for build in 2023. Customers may place orders now at authorized Ford retailers or directly with Hennessey by calling +1 979.885.1300 or visiting HennesseyPerformance.com.