Will be a reincarnation of one of the most iconic Ferraris ever made, the 1960 SWB California Spyder 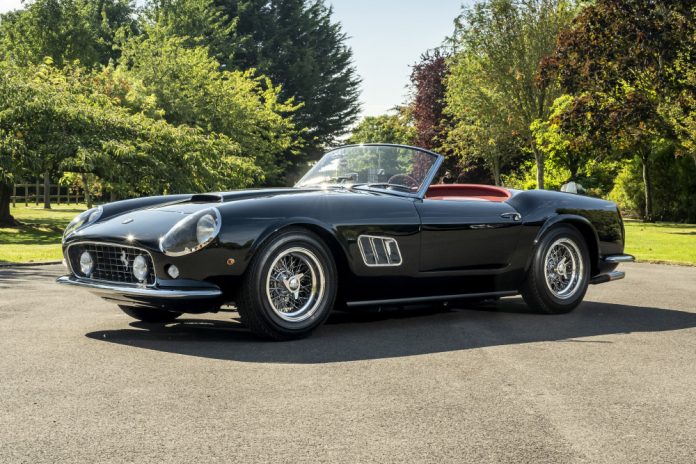 GTO Engineering will reveal the third model in its revered Revival series, the California Spyder Revival, at this year’s world-famous Goodwood Revival event. This masterful interpretation will be a reincarnation of one of the most iconic Ferraris ever made, available to be customised by each client to their exacting specification. The hand-built, tool room copy based on the 1960 SWB California Spyder will make its global debut at the upcoming Goodwood Revival on GTO Engineering’s ‘Over the Road’ stand from 17 – 19 September 2021.

Originally designed by Pininfarina and magnificently completed by Scaglietti, the California Spyder is without a doubt one of the best collaborations to ever leave the gates of Maranello. A total of 106 California Spyders were produced by Ferrari in SWB and LWB guise, making it one of the rarest models to be made. Today, the original vehicles that remain are invariably only found in the highest level of specialist collections, rarely seen on the open road or unchanged from their original factory specifications.

In contrast, the California Spyder Revival by GTO Engineering can be customised, whether that be upgraded engines, gearboxes or interior and exterior colour options. GTO Engineering’s California Spyder Revival will feature either a standard 3.0-litre, upgraded 3.5- or 4.0-litre engines, mated to either a standard four- or optional five-speed manual gearbox. The level of quality and attention to detail is also indicative of GTO Engineering’s knowledge and specialist experience, with each vehicle built by hand using components manufactured by the team, a process that takes over 1,500-man hours. It’s this experience that also sees thoughtful and in-keeping upgrades such as tortional rigidity enhanced through strengthened sills due to its soft-top nature as well as giving it greater stiffness than the original.

However, keen historians and Ferrari fans will note that the California Spyder is not just about speed but also glamour and comfort. GTO Engineering’s interpretation of the legendary car, in its Revival format, is one the team has deliberated for some time, choosing to revive the iconic and rare 1960 SWB specification. As one of the most revered Ferraris ever designed, the California Spyder Revival will be in good hands as the team at GTO Engineering will continue where the workforce of Maranello left off, with each area of the build being better or matched in terms of quality and manufacturing standards. A key element will be in the hand formed aluminium body, manufactured with GTO Engineering’s own tooling, as well as the interior, which can be finished in a range of luxurious leathers and optional smaller, vintage-style wooden steering wheel fitted with an original style horn.

As one of the most desirable road cars Ferrari has ever made and generally thought of as one of the prettiest cars the Italian manufacturer has produced, GTO Engineering is well established to revive this Sixties icon. Having started the bespoke, low-volume Revival series in 2008, the company has since had strong sales across its three models in the series; 250 SWB Revival, 250 Testa Rossa (TR) Revival and now the California Spyder Revival.

“It’s very exciting to be able to start talking about our latest addition to the Revival series: the California Spyder Revival. It is one of, if not, the most iconic Ferrari road car from the Sixties and it’s something we’ve worked hard over recent years to develop, following on from the success of the 250 SWB Revival and 250 TR Revival models. The feedback from both previous and new Revival-series customers is encouraging and we’re looking forward to work with more owners to create their dream car.” – Mark Lyon, Founder and Managing Director of GTO Engineering

Pricing of the GTO Engineering California Spyder Revival is indicated between £750,000 – £850,000 depending on donor vehicle, final specification, local taxes and shipping. Each California Spyder Revival can be tailor made to each owner’s specific requirements and will be created by hand in the UK, with first customer deliveries scheduled at the end of 2021. GTO Engineering’s stand at Goodwood Revival will be located at the ‘Over the Road’ for the duration of the event (17 – 19 September).