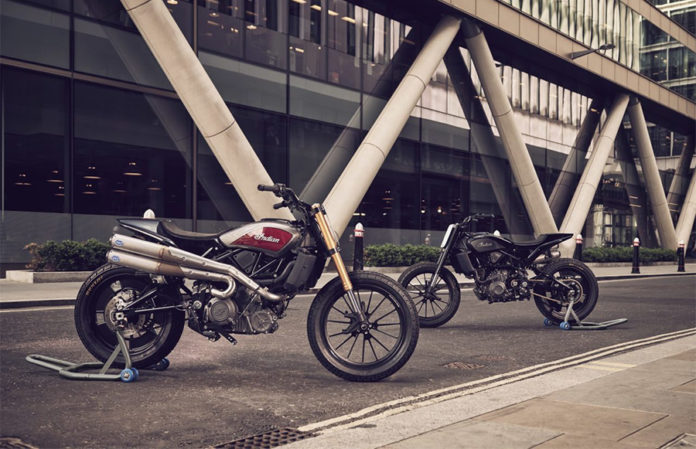 Indian Motorcycle, America’s first motorcycle company, revealed two FTR 1200 race machines at the Bike Shed London Show over the weekend. Prepared for Hooligan racing by S&S Cycle, the FTR 1200 Hooligans will make their race debut in the hands of Krazy Horse teammates, Lee ‘KP’ Kirkpatrick and Leah Tokelove for the second round of the European Hooligan Championship during Wheels & Waves in June.

“The standard FTR 1200 is an awesome looking street bike with excellent handling and plenty of power,” says Grant Bester, Vice President and General Manager for Indian Motorcycle EMEA. “For racing on dirt ovals, the work by S&S Cycle turns the stock street bike into an awesome Hooligan race package and I can’t wait to see them hit the track at Wheels & Waves.”

Lee ‘KP’ Kirkpatrick (#152) commented, “I’ve been looking forward to riding an FTR 1200 ever since I first laid eyes on one. So, when Indian Motorcycle asked if I’d be up for racing an S&S prepared FTR 1200 hooligan bike in Europe you can probably guess what my answer was. It’s insane; not just how good it looks, the engineering work that’s gone into them and to be given the chance to race one, it’s such an honour. I’m looking forward to getting some testing time on the bike, working with Indian and S&S Cycle on the development.”

Leah Tokelove (#37) is equally excited, “Imagine my elation when I got asked if I would like to race one,” she says. “That feeling was next level. After seeing the bike for the first time in its Hooligan form, I’m just blown away by the level of detail and consideration that has gone into transforming this street bike into a racing bike. All of the parts used are of the highest quality and everything has been considered; the craftsmanship is unreal. S&S have done a fantastic job of developing the Hooligan racer from the original FTR 1200, their involvement has enabled Indian to project their Hooligan team to a whole new level, so thanks to S&S Cycle for their support. I am one very happy Hooligan with Pigtails – Let’s go racing!”

S&S Cycle has played an integral part in the development and success of the FTR750 race program and applied that level of race winning perfection to the recently launched FTR 1200. Beyond the more visible changes such as the number plate, removal of the front brakes and the S&S 2-into-2 exhaust system, modifications have been made to the riding position, clearance, suspension and handling with special race parts designed, or selected, by S&S Cycle. Headline figures are a weight reduction of over 25kg, and a wheelbase shortened from 157cm to 148cm.

To improve clearance for the extreme lean angles of flat track racing, the oil cooler, battery, starter solenoid and voltage regulator have been moved from their stock position behind the front wheel and allow the use of -2 degree neck cups in the S&S billet triple-clamps. This sharpens the handling through a steeper rake and shorter wheelbase and the handling can be further tuned with the 8mm of movement in the adjustable offsets of the S&S triple clamps.

For stiffer, race-ready suspension, the Hooligans feature fully-adjustable inverted cartridge front forks and a FOX FTR 1200 race monoshock, with remote reservoir, specifically designed for flat track racing. Matched to the rear shock is a new, shorter S&S swingarm for better handling and feel. With the new swingarm 25mm shorter, the rear wheel could touch the standard underseat fuel tank, so a smaller, aluminium fuel cell has been designed.

To attack the ovals, the rider is given a more commanding position with wider Pro Series Protaper bars which are brought closer to the rider with new risers to get the elbows up. New frame spars reposition the footpegs for better clearance and the new sub-frame, housing a smaller and lighter Lithium Ion battery, features a carbon fibre race seat tail unit.