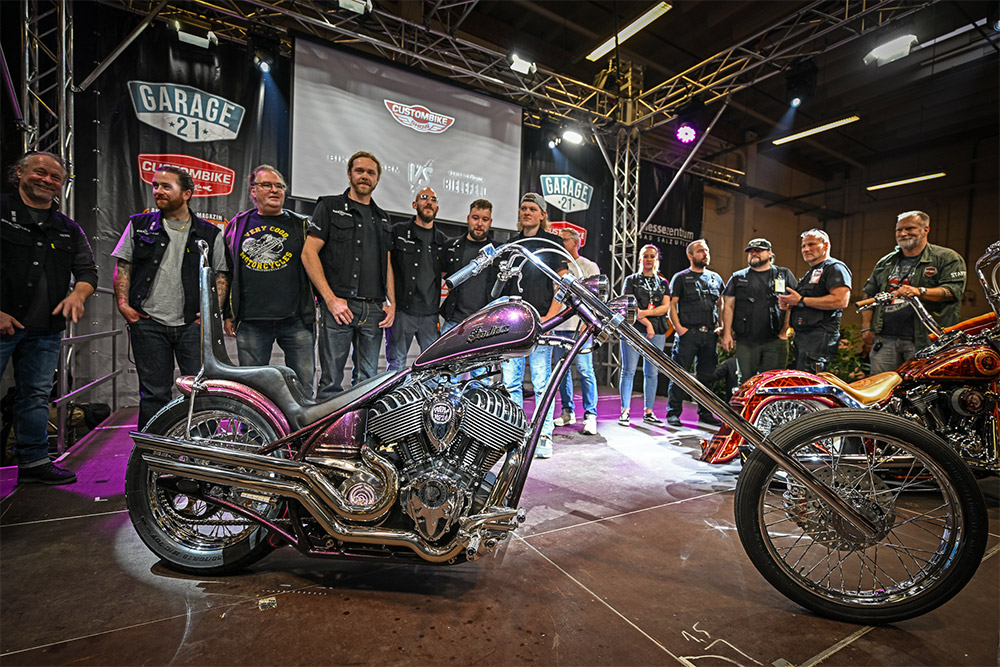 First held in 2007 and the highlight of the famous Custombike show, the European Biker Build-Off sees two teams competing to complete their custom bike in just three days, live, under the eyes of the trade show visitors. This year’s title fight was even more exciting as both finalists come from the region, just 30km from each other: Bike-Farm, the Indian Motorcycle dealer from Melle and Reibchen + Stegemann the Harley Davidson dealer from Bielefeld.

From Friday to Sunday at noon, the creation of two extraordinary custom bikes could be followed on the show stage and by 1 pm on the Sunday, the time had come: Judgement Day. With 529 to 179 votes, nearly a 3:1 ratio, the audience chose Bike-Farm’s ‘Purple Haze’ Indian Chief chopper as the clear winner.

“A classic long fork chopper based on the 2022 Indian Chief! It’s absolutely stunning what the Bike-Farm crew has created here. This bike radically brings to flower the seeds that are at the core of the current Chief lineup: The spirit of the past combined with the technology of today.” said Ola Stenegärd, Director of Industrial Design at Indian Motorcycle. “We always had the builders in mind during development and we worked really hard to make the reimagined Indian Chief a delight to work on. So, it’s such a pleasure to see this great canvas to create motorcycle art.”

Not only has ‘Purple Haze’ been completely designed around the current air-cooled Thunderstroke 116 engine, it also still features all the electronic amenities of the original Chief Dark Horse from which it evolved: from ABS to GPS navigation, via the touchscreen of the original gauge now centered in the revised Chieftain tank.

Other core companets have also been adopted and adapted from the original bike such as the footrests and brake systems. The frame, with a full 48° rake, was manufactured by the Dutch experts VG Motorcycle Specials, and all other components are custom-made by the Bike-Farm crew: Sheet metal parts such as the tank cover with integrated gauge and GPS transmitter to the fender were created in-house just like the sissy bar, seat, wheels, handlebars, final drive, intake and exhaust system. Even the seal-less, oil-free fork with its Teflon-lubricated sliding tubes incorporating Progressive Suspension Cartridges. Finally, Lange Metallveredelung took care of the chrome surfaces, while Vossi Lackcenter Melle traditionally handled the finishing of the paint.

“The entire bike was created within just eight weeks,” as workshop manager Tristan Frische recounts. “With four men, we wrenched, shaped and turned day and night. All the more we are delighted with this title. Not only have all the electronic features been retained, but also the fully road legal, including remaining Euro 5. So, this dream bike will soon be seen quite regularly on public roads.”

More information about the ‘Purple Haze’ and Bike Farm/Indian Motorcycle Melle can be found on www.indian-melle.de and on their social profiles at Facebook and Instagram.