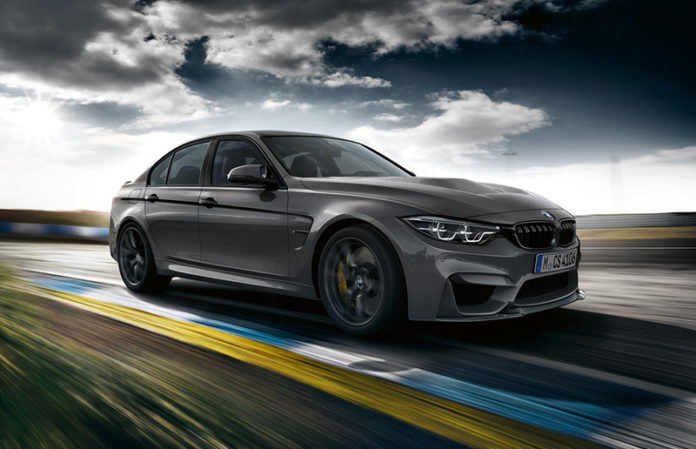 BMW has announced the first-ever BMW M3 CS, a special-edition model that delivers a fine blend of high performance and complete everyday practicality. The engineers at BMW M GmbH have succeeded in intensifying the dynamic, emotion-packed character of the BMW M3 with a carefully crafted ensemble of modifications. The extensive use of carbon fiber-reinforced plastic (CFRP), has kept the first-ever BMW M3 CS extremely light; around 110 lb less than a standard M3. Large sections of the body are also made from CFRP, including the hood, which is around 25 percent lighter than that of the regular BMW M3. The CFRP roof alone is more than 13 pounds lighter than a conventional steel version. These changes effectively lower the car’s center of gravity, which endows the BMW M3 CS with even better agile handling. The back of the vehicle features a redesigned “Gurney Flap” in exposed carbon fiber. This aerodynamic spoiler lip running across the trailing edge of the trunk lid significantly reduces rear-axle lift. In the interests of everyday practicality, the M3 CS forgoes a roll cage.

The excellent dynamics of the first-ever BMW M3 CS are rooted not only in unique suspension set-up (in terms of spring/damper settings), but also in a moderate increase in power for the M TwinPower Turbo technology 6-cylinder inline engine. Fitted in the M3 CS it develops 453 hp at 6250 rpm (+28 hp) and peak torque 443 lb-ft from 4000 to 5380 rpm (+37 lb-ft). The unmistakable roar of the twin turbo engine is enhanced by the M sports exhaust system that has been specially tuned for the CS and whose quartet of stainless-steel tailpipes blend perfectly into the CFRP rear diffuser.

Generous use of Alcantara and the two-tone full Merino leather in Silverstone/Black endow an enviably sporting feel. The engine in the first-ever BMW M3 CS is fired up with the push of a new red start/stop button. Paring down the passenger compartment to the essentials and, in so doing, achieving significant weight savings is also expressed in the presence of lightweight M sports seats. Its passengers need not go without niceties such as automatic climate control and a high-quality, specially adapted version of the Harman Kardon surround sound system. 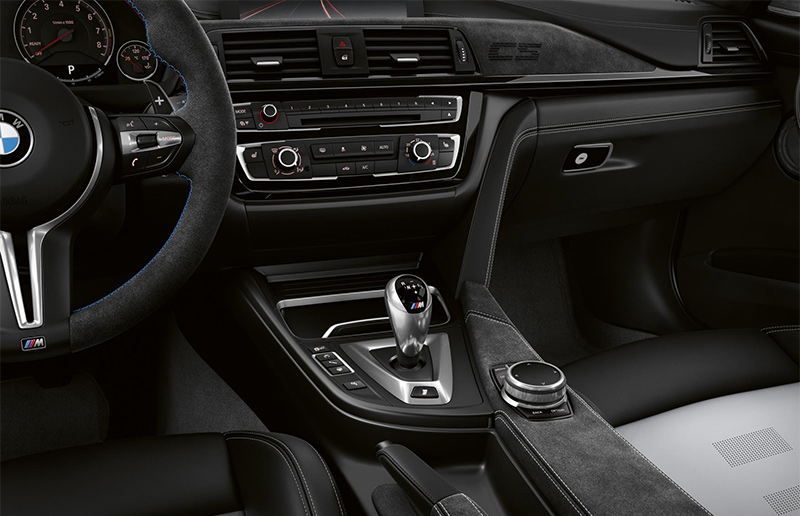 Orders for the first-ever 2018 BMW M3 CS can be placed starting May, 2018. Production of the high-performance sedan will be limited to approximately 1,200 units worldwide, with approximately 550 units coming to the U.S. Pricing will be announced closer to market launch.

The inline 6-cylinder engine has a long tradition at BMW, and in the first-ever BMW M3 CS it is once again responsible for delivering top performance. Compared to the standard M3, maximum output has been increased by 28 horsepower to 453 hp, which is on tap at 6,250 rpm. Peak torque of 443 lb-ft is around 10 percent higher (M3, 406 lb-ft) and can be summoned over a wide rev range – from 4,000 rpm up to 5,380 rpm. The result, 0 to 60 mph sprint takes just 3.7 seconds, while the top speed of the BMW M3 CS, which comes with the M Driver’s Package as standard, is electronically limited to 174 mph. 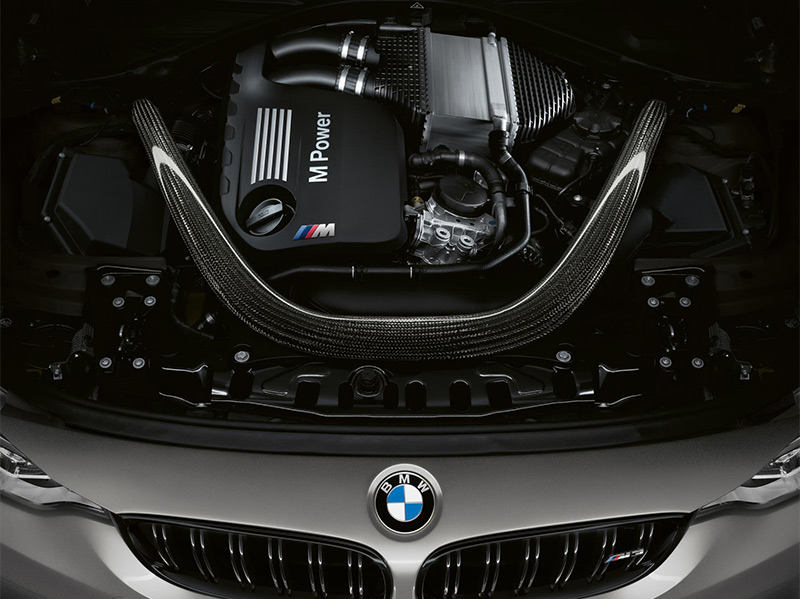 The first-ever M3 CS features a dual-branch sports exhaust with the characteristic four tailpipes at the back neatly incorporated into the styling of the rear diffuser. The exhaust back-pressure is as low as possible, helping to enhance power, and it is governed by a system of flaps. Positioned directly upstream from the rear silencers, the flaps are controlled electrically and are designed to provide optimum feedback on the engine’s load state throughout the rev range as well as generate that unmistakable, sporty M sound. The driver can alter the way the system of flaps works by preselecting a driving mode. The tailpipes are made from stainless steel and bear the M logo.

Power is transmitted to the rear wheels of the first-ever BMW M3 CS via the proven 7-speed M Double Clutch Transmission (M DCT) with Drivelogic. Extremely fast gear changes mean there is no interruption in power flow, while the M Launch Control function ensures flawless acceleration from a standing start. The M DCT unit operates fully automatically, but there are also shift paddles on the steering wheel should manual gear changes be the order of the day. To help cope with even the most demanding operating conditions, the 7-speed transmission comes with a dedicated oil cooler. 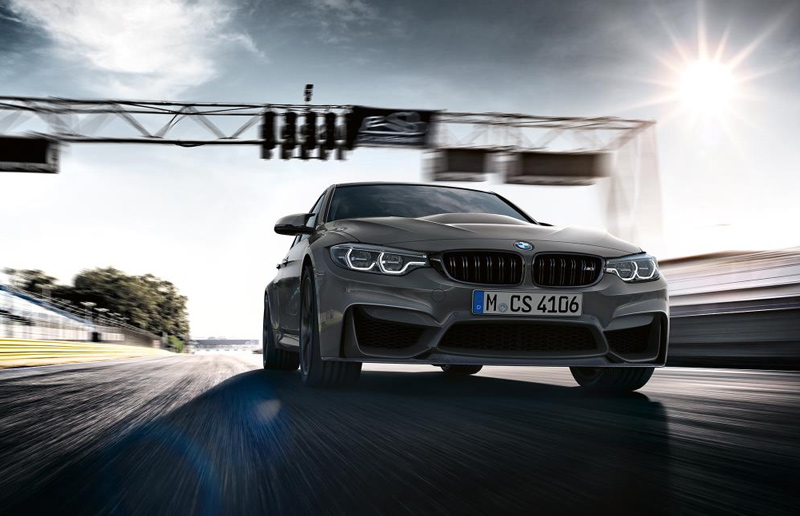 Driving dynamics perfected on the race track: M-precision and agility.

Cars created by BMW M GmbH have always stood out by virtue of their agility, steering precision and handling stability. The first-ever BMW M3 CS upholds this tradition, while also catering to the sports-minded driver with a variety of set-up options for the suspension, the M Servotronic electromechanical steering, the DSC stability control system and the 7-speed M Double-Clutch Transmission with Drivelogic.

The first-ever BMW M3 CS is fitted as standard with Adaptive M Suspension, offering the driver the choice between Comfort, Sport and Sport+ modes, including different damper settings in each of the three modes. Three different settings for the precise electromechanical steering of the M3 CS can also be selected at the touch of a button. 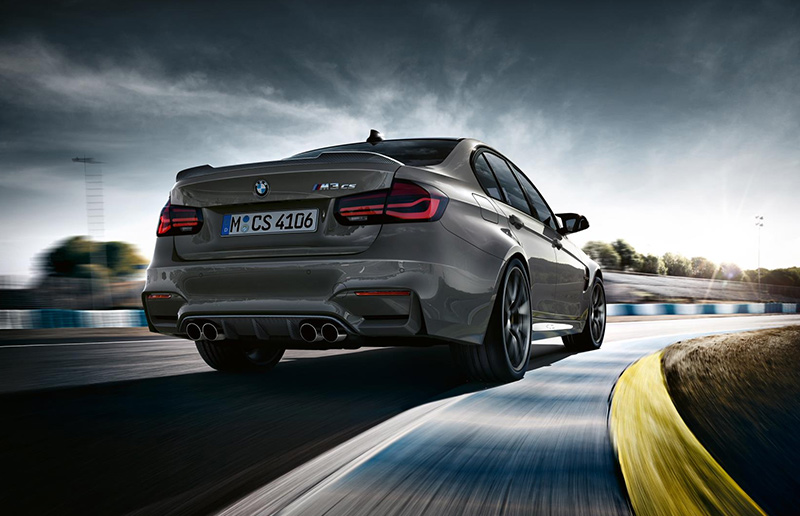 DSC normally counters understeer or oversteer by means of targeted intervention in the engine and brake control systems. In the case of the M3 CS, engaging M Dynamic Mode (MDM) allows a greater degree of wheel slip, making it possible to perform mild drifts. This is the sort of maneuver drivers seeking particularly sporty and dynamic responses will enjoy.

The limited-run BMW M3 CS special-edition model is fitted with forged light-alloy wheels in Orbit Grey Matt as standard. Their ten-spoke design takes its cue from the wheels of the successful M4 cars competing in the German Touring Car Championship (DTM) race series. The BMW M GmbH engineers have rigorously applied their lightweight design approach to the wheels as well. The 10 J x 20-inch wheels at the rear weigh just over 22 pounds each and their 9 J x 19-inch counterparts at the front a mere 19 pounds. That keeps the unsprung masses low, which is another factor in the exceptionally dynamic handling of the M3 CS. The M3 CS rides as standard on mixed-size Michelin Pilot Super Sport tires (265/35 R 19 at the front and 285/30 R 20 at the rear). 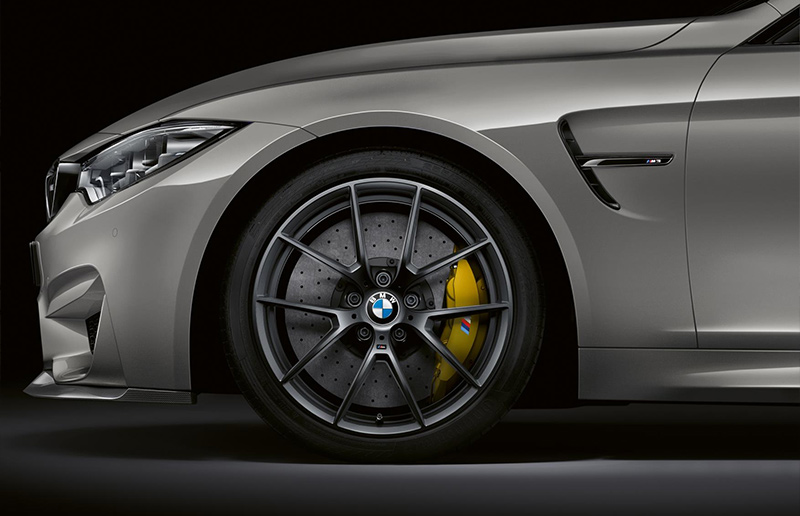 Like the M3, the first-ever M3 CS comes with BMW M compound brakes as standard. Fixed 4-piston calipers at the front and fixed 2-piston units at the rear are employed to deliver outstanding stopping power and high fade resistance. Compound brakes are far lighter than conventional equivalents, meaning a further reduction in unsprung masses and therefore even sharper handling. The BMW M3 CS is optionally available with BMW M Carbon Ceramic brakes. These brakes feature fixed 6-piston calipers at the front and 4-piston calipers at the rear, are even lighter, can withstand the sort of extreme loads experienced in race action on a track and are even more durable.

Expressive design: Punchy use of forms and intelligent lightweight engineering.

The first-ever BMW M3 CS special-edition model leaves no doubt as to its performance capabilities with its looks alone. No matter which angle the M3 CS is viewed from, it appears as if cut from a single mold, has a muscular, athletic look and makes it perfectly clear it is a high-performance sports car. In other words, the M3 CS is another uncompromising expression of the BMW M design language that sets out to communicate its exceptional performance and exhibit all of its emotionally rich, intensely dynamic character. 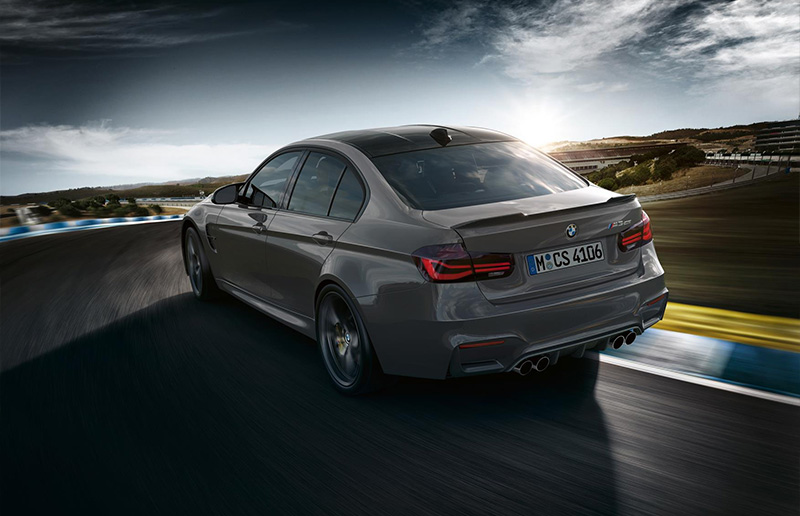 The front end, with its pronounced three-dimensional contouring, radiates sportiness from every angle. Distinguishing features include the twin headlight units with their state-of-the-art LED technology and the slender kidney grille. The front apron is divided into three parts and highlights the dynamic nature of the first-ever BMW M3 CS even more vividly, at the same time as performing its technical functions. The large air intakes provide highly efficient cooling for both the twin-turbo 6-cylinder engine and the powerful braking system. The front splitter is made from lightweight exposed carbon fiber and reduces lift at the front axle to great effect. Carbon fiber-reinforced plastic (CFRP) has also been used for the restyled “Gurney Flap” at the rear, effectively reducing rear axle lift. The CFRP rear diffuser is carried over from the BMW M4 GTS. It adds a visually stunning and sporty flourish to the rear end and seamlessly incorporates the four stainless-steel tailpipes of the dual-branch, CS-specific M sports exhaust system into its styling. The diffuser and front splitter also optimize the airflow along the vehicle’s underbody and combine with the “Gurney Flap” to keep the car in even firmer contact with the road. The use of multiple components made from CFRP is a further indication of BMW’s firm commitment to intelligent lightweight engineering with the first-ever M3 CS. 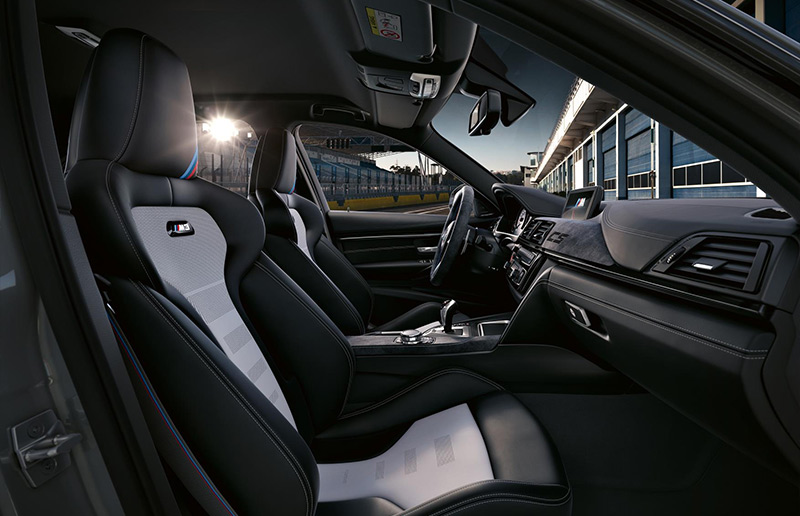 Exclusive specification. Sportiness and comfort flowing through every vein.

The cabin of the first-ever BMW M3 CS is awash with leather (in an exclusive two-tone Silverstone/Black finish) and Alcantara. Both the driver and front passenger settle into the same specially-designed lightweight M sports seats fitted in the M3 with Competition Package. The rear seats are likewise upholstered in Merino leather in an exclusive two-tone Silverstone/Black combination with grey contrast stitching. The sports seats in the first-ever BMW M3 CS guarantee optimum lateral support, even when powering around a track, yet they are also very comfortable on long journeys. The familiar BMW M stripes have been incorporated into the front seat belts.

The most important accessory for drivers of the first-ever BMW M3 CS is an M sports steering wheel. Wrapped in exclusive, anthracite-colored Alcantara with a silver 12 o’clock marker, this cost option provides outstanding grip in all driving situations. Alcantara with grey contrast stitching adorns the handbrake lever. 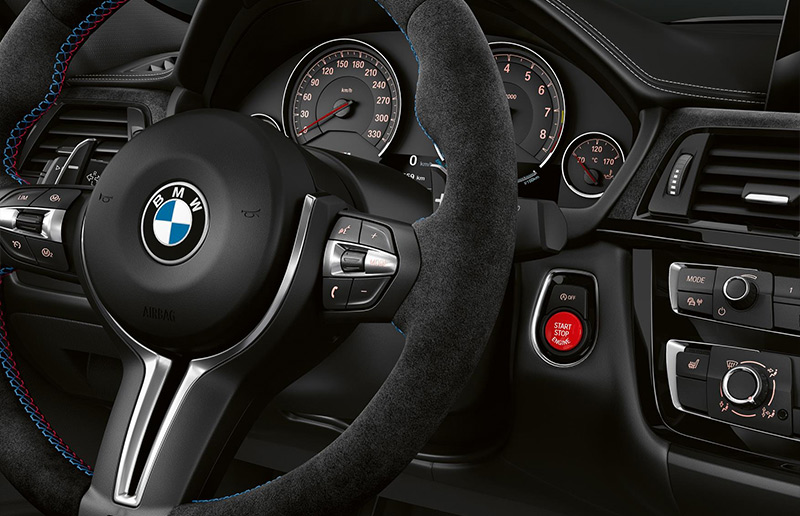 Despite the intensely sporty focus of the first-ever BMW M3 CS, drivers do not have to go without comforts such as automatic climate control. There is also a Harman Kardon surround sound system for the ultimate in listening pleasure, while the BMW Navigation system Professional is part of the extensive standard specification for the first-ever BMW M3 CS.