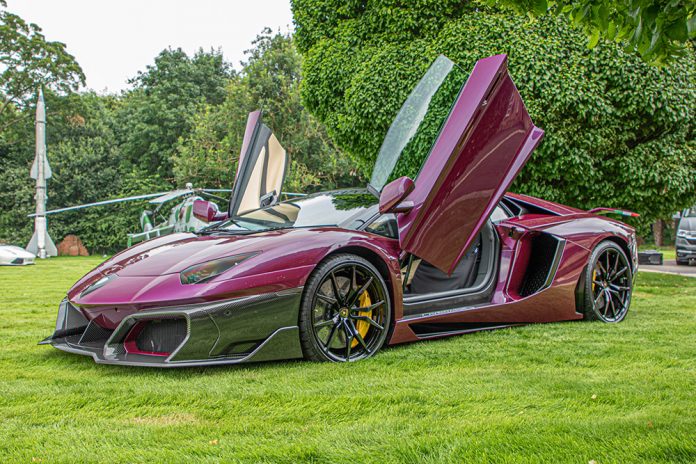 Huber, the coach builder who earlier this year announced an Aventador facelift has delivered their first vehicle to a United Kingdom based customer during a spectacular launch. The membership Secretary of the Lamborghini Club UK, none other than Ciro Ciampi also founder of the car community Petrolheadonism received his latest toy on the lawn of the former residence of David & Victoria Beckham, Rowneybury House in England’s prestigious Hertfordshire.

The Estate is currently home to one of Britain’s most private car collections, creating a spectacular setting for the launch. The scene was not only complimented by the astonishing car collection,  but by the attendance of Italian Supercar patron Fabio Lamborghini. The man himself was impressed by the Era and was happy to give his seal of approval by being the first to unveil the car to the world.

Spear headed by Sean-Peter Huber the brand is on a mission to build a new community of collectors and car enthusiasts who value going back to the drawing board. His passion for car design has put them in uncharted territory in the aftermarket, but the first steps are already telling of what an exciting future the brand holds.

Entitled ‘Era’ to mark ten years of the Aventador and to pay homage to the end of its production, Huber’s Era has created a new take on one of the worlds most revered supercars. The team have focused on creating new body panels that respect the familiar DNA, exchanging the front and rear bumpers with an entirely new design in carbon fibre and an optional carbon fibre trunk. Huber said “the Era should remind us of how much we all admired the Aventador when it was launched in 2011”.

The fully-funded project is independent of Lamborghini with first bumper units already scooped up by selected collectors who have been supporting Huber’s vision from the start. The Era starts at an attractive pricing point of 30,000 Euros and will be limited to 21 pieces in the current edition with the first one finding its home in the United Kingdom.

More positive messages came from Huber’s UK Distributor Supercar Service Ltd, who’s founder Raj Singh stated that in their eleven year history they have not found an aftermarket design that integrates so well with the LP-700-4 chassis. As a result Supercar Service Ltd were only too happy to be considered a part of the Huber infrastructure. As an option to customers around the world and to assure quality control, Huber is proud to announce them as flying service partner, flying to customer locations to assemble the Era.

By: Huber | Photos Courtesy of: Huber

Lamborghini: Recent Records and Firsts You Might Not Know About

Lamborghini: Records from the Past that You Might Not Know About