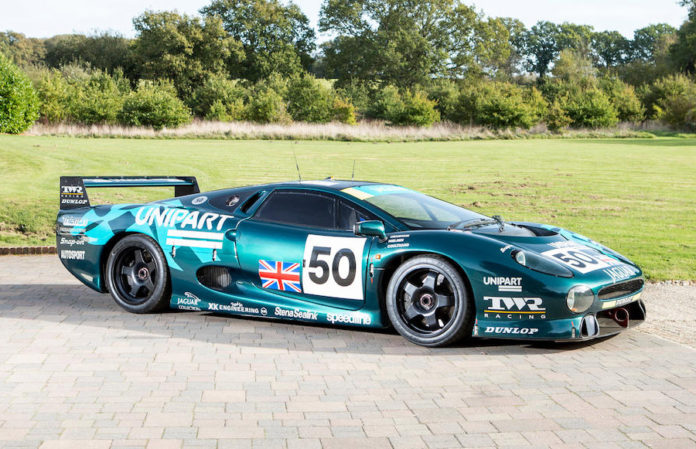 Bonhams is delighted to offer not just a Jaguar XJ220 ‘Supercar’ but the unique ex-Tom Walkinshaw Racing team Jaguar XJ220C ‘Lightweight’ which carried its outstanding driver trio to the victory podium at the 1993 Le Mans 24-Hour race – as winners of the GT class there.

Only four examples of the XJ220 Competition model were prepared to FIA/IMSA Le Mans specifications in 1993. The TWR quasi-works team despatched two of these new cars to the Le Mans Test Day in May that year, in preparation for the race late the following month, with assigned drivers David Brabham, Armin Hahne, Andreas Fuchs and Jay Cochran on hand to drive them. Triple-Formula 1 World Champion Driver Sir Jack Brabham’s son David did the lion’s share of the work on that Test Day, expressing considerable optimism that the cars would prove fully competitive come the race on June 19-20th. Driver Jay Cochran was credited with the fastest XJ220C test time – his lap in 4mins 16.520secs being 13th quickest overall behind inherently faster Category 1 and Category 2 cars such as the factory Peugeot 905B, Toyota TS010s, Porsche 962s and Courage C30LMs – all forerunners of what would become the now familiar – and legendary – Le Mans Prototype (LMP) cars. Only one GT entry lapped faster than these new Jaguar XJ220C Coupes, and that was the very special works Porsche 911 Turbo S LM of Hans-Joachim Stuck. 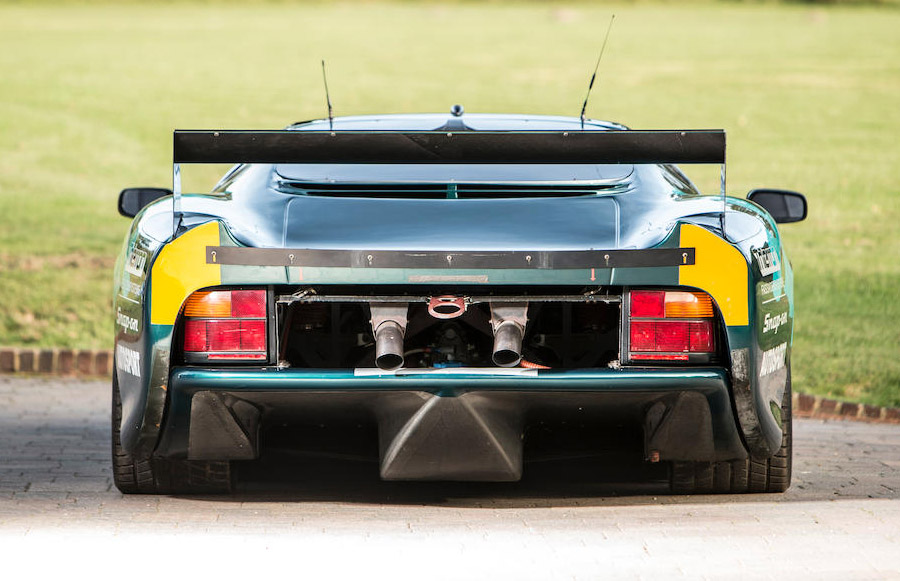 Despite spending most of its Test Day time exploring potential set-ups for the race, the TWR XJ220C sister car to Cochrane’s, co-driven by David Brabham, Armin Hahne and Andreas Fuchs set a best time only 0.4sec slower than the American so these two brand-new Jaguar Le Mans entries had proved themselves the 2nd and 3rd fastest GT cars there overall.

In fact the first prototype XJ220C ‘Lightweight’ competition version of the new ‘Supercar’ model had made its public debut at the ‘Autosport‘ Racing Car Show in Birmingham in January that year. Finished in vibrant yellow livery the new car made extensive use of redesigned fully-detachable nose and tail body panels moulded in carbon composite material in place of the standard XJ220 design’s fixed aluminium coachwork. The XJ220C’s doors and wider monocoque sills were also in lightweight carbon composite as were the dashboard, transmission tunnel and instrument binnacle. In addition this Competition version – with its spartan racing-orientated cockpit, featured a Kevlar seat, uprated 4-cam twin-turbocharged V6-cylinder race-tuned engine and racing transmission, brakes and electronics. New wheels and tyres were specified while the suspension was modified both in its geometry and with different new uprights both front and rear to enhance brake cooling with the larger discs and calipers being deployed. The XJ220C used a larger radiator than the road-going model to cool its uprated engine more adequately, and the car’s lubrication system featured an oil-to-liquid coolant heat exchanger in place of the standard oil/air cooler system. 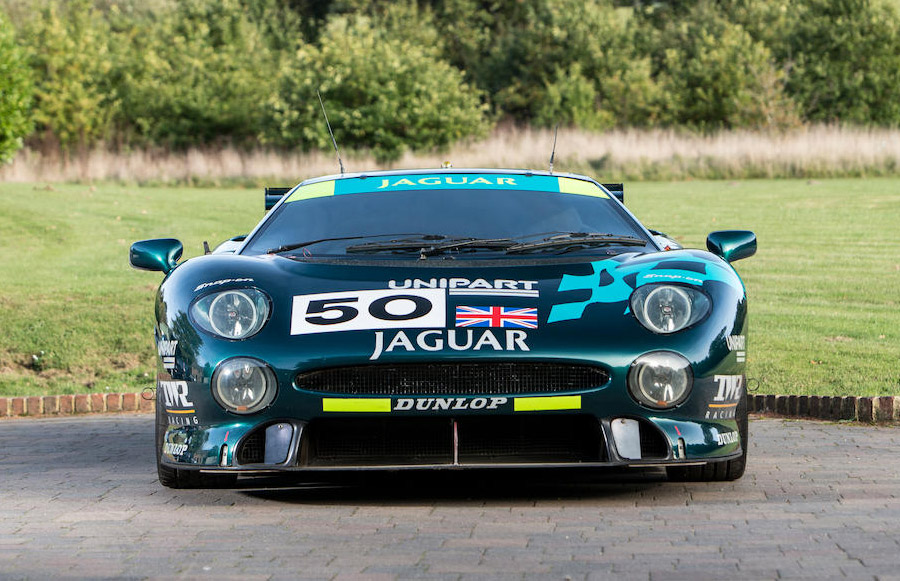 The new competition car was tested initially at Silverstone and Bruntingthorpe before TWR made its first entry of the model in the inaugural International GT Series event at Silverstone thatn May. TWR’s lead driver Win Percy qualified the now blue-liveried new car on pole position, and comfortably won this debut race.

Meanwhile normal production XJ220 Coupes had also been given their racing debuts by enthusiastic private owners. As early as March that year in the Italian GT Championship, Vincenzo Bianchi had finished second overall behind a lone Ferrari F40 at Monza, while at Magione, in April, Paolo Cutrera drove his XJ220 home fifth, before winning outright at Vallelunga in May, when he led no fewer than five Ferraris – four of them F40s – to the chequered flag. At Misano, Cutrera finished third and Bianchi fifth, then third again at Mugello, second at Pergusa and in the Binetto event, fifth at Varano, and third yet again at Imola before rounding off the series with fourth back at Mugello. 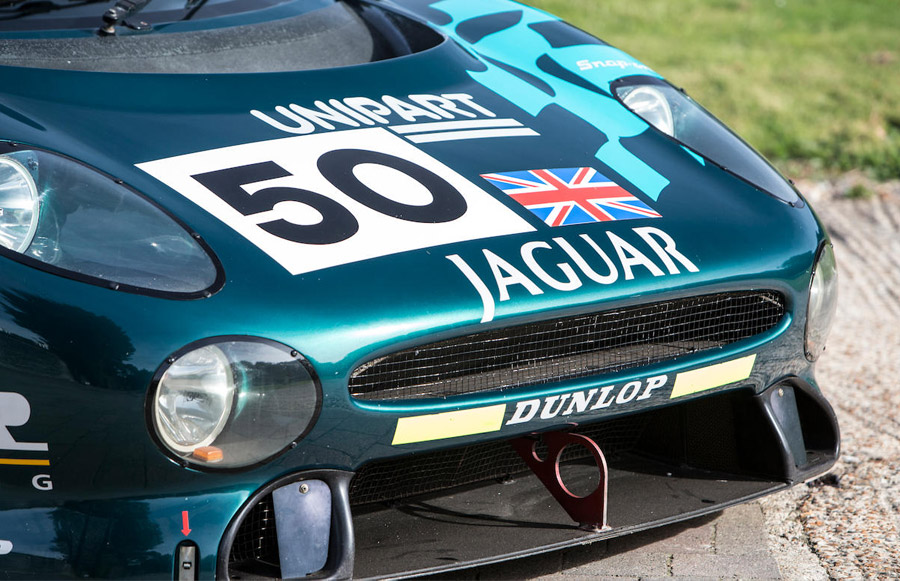 However, during testing the organising ACO club’s Chief Steward Alain Bertaut had noticed that the XJ220Cs were running without the catalytic converters that were fitted to the standard road-going models. He regarded this as an infringement of the Technical regulations, believing that such catalytic converters if specified for the base model should also be retained for competition. 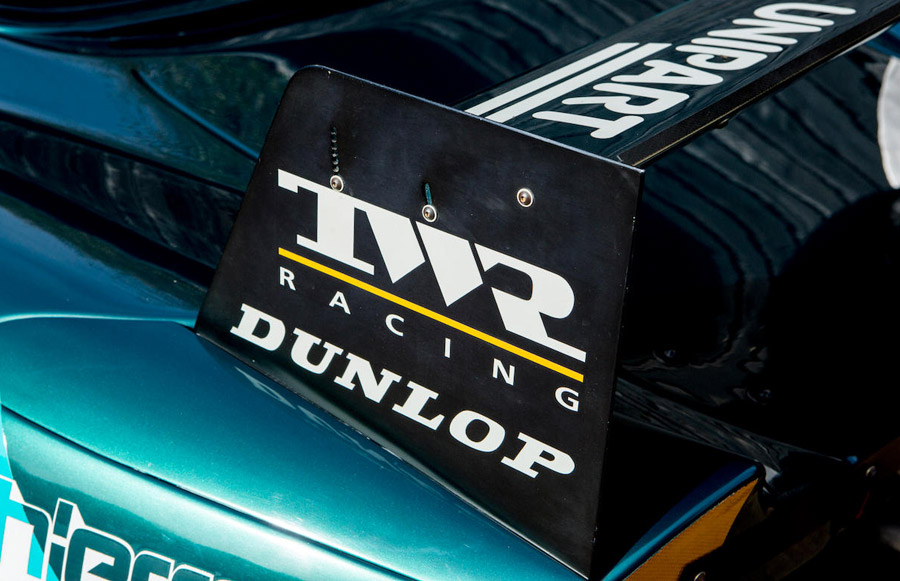 The Jaguar XJ220Cs had, however, been built to comply with the American IMSA governing body’s International GT class rules which were also understood to accepted by the ACO – thus rendering the cars compatible with racing regulation on both sides of the Atlantic. No other Le Mans entries were running catalytic converters in their race-tuned forms, and Tom Walkinshaw debated the point hotly with M. Bertaut. IMSA technical head Amos Johnson took TWR’s side in this dispute, and M. Bertaut finally allowed the new XJ220C cars to compete in the June 24-Hour race, but only under appeal. A pre-existing atmosphere of animosity between Tom Walkinshaw and Alain Bertaut – who was on extremely amicable terms with several other long-term British entrants – did not help. 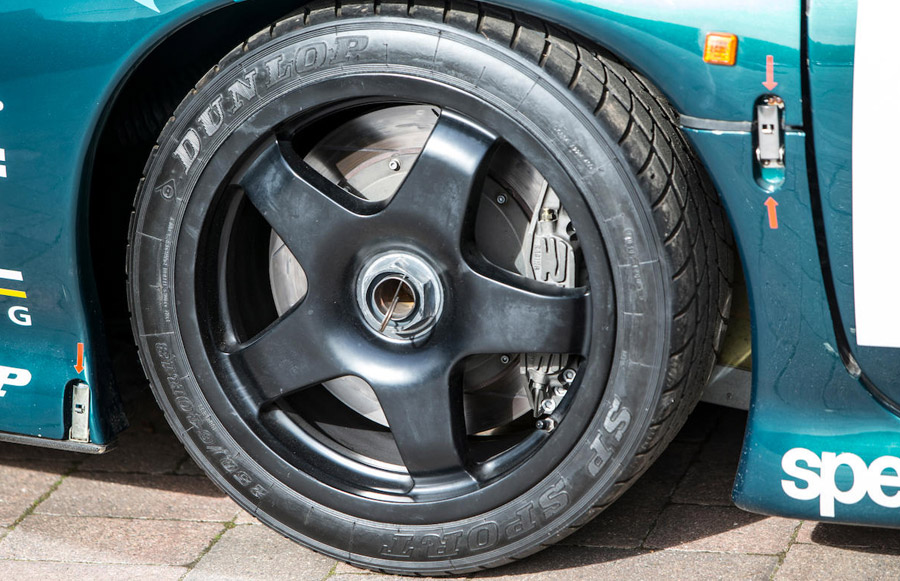 The XJ220Cs ran with engine restrictors limiting their V6 power output to ‘only’ 500-horsepower. In pre-race practice H-J Stuck set fastest GT time in the Porsche 911S LM at 4:06.51 while David Brabham’s best was 4:07.88 for the Jaguars. He set his time despite his car having toppled from its jacks during Wednesday practice and trapping his foot. He remained in pain for the rest of the weekend, being provided with a pack of frozen peas labeled ‘Do not eat – for David’s foot’.

Meanwhile, Andreas Fuchs crashed the third team car on Wednesday evening, under braking for the first Mulsanne Straight chicane. The damage was repaired in time to start the great race, but after only six laps TWR lost the first of its 220C cars when the No 51 Percy/Hahne/Leslie car suffered a head gasket failure and boiled into early retirement. Stuck initially led the GT contenders before his Porsche’s throttle jammed in the second hour. After the Porsche had lost five laps, it was crashed by co-driver Walter Rohrl who rammed a backmarker under braking – again at that first Mulsanne chicane. 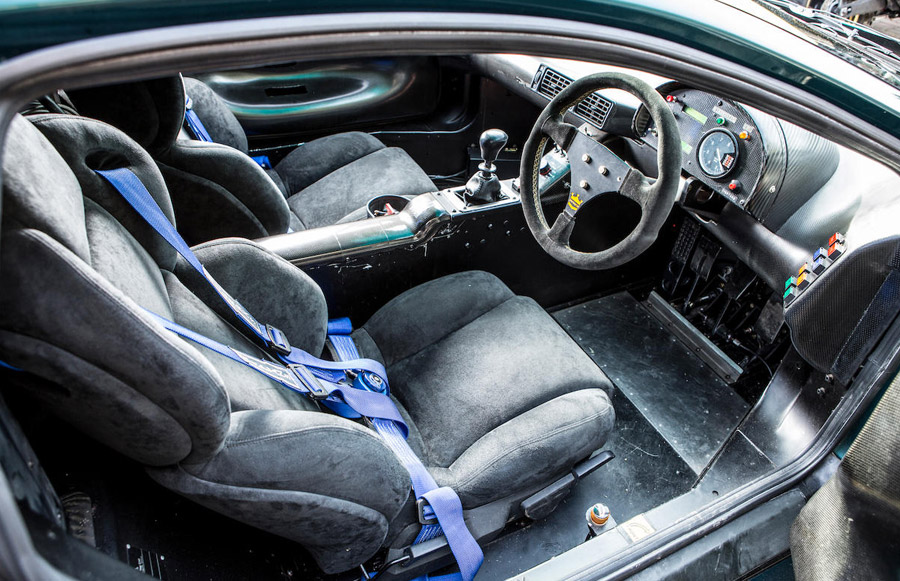 The surviving pair of Jaguar XJ220C Coupes then ran first and second in the GT class – the car now offered – No 50 – leading from its sister No 52. However, during the night David Brabham smelled fuel fumes in the cabin of his leading Jaguar, and they were getting worse. Feeling faint, gasping for clean air, the young Australian brought the car into the pits at around 2:55am, and the investigating TWR mechanics found that its fuel tank had split and sprung a leak. David was asked to complete another steady lap while a fix was prepared. His response was classically hard-bitten Aussie. TWR’s finest were told to go forth and multiply… No way would he return to driving the car until that leak had been sealed and free-flowing fuel on the cabin floor sponged dry.

This delay cost the car its class lead, which was inherited by the sister No 52. However, Andreas Fuchs subsequently had a tyre explode, surviving a full 360-degree high-speed spin on the Mulsanne Straight. He limped the car back to the pits with only minor body damage but the engine was overheating, and after completing 176 laps the stricken car had to be retired. 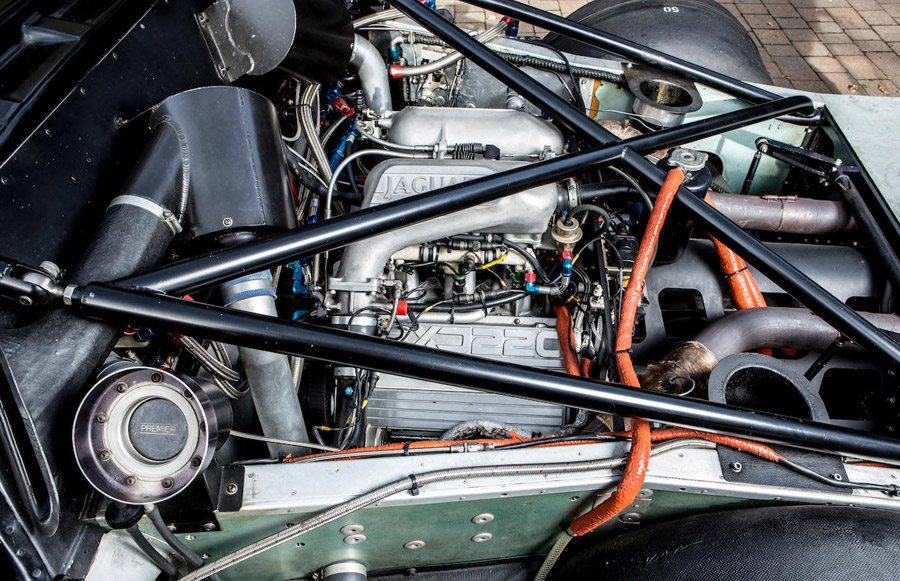 With the remaining Porsche challenge gasping in the sole surviving Jaguar XJ220C’s wake, Nielsen/Brabham/Coulthard emerged two laps ahead of their nearest class rival, the 3.8 Porsche Carrera RSR of Barth/Gouhier/Dupuy. TWR’s Danish/Australian/Scottish driver trio finally brought this green-liveried beauty home in 15th place overall after the full 24 hours, headed only by the victorious 1-2-3 trio of works Peugeot 905C prototype Coupes, two quartets of Toyota and Porsche prototypes, and two Porsche-powered Courages. David Brabham’s older brother Geoff Brabham co-drove the outright race-winning Peugeot, and Sir Jack was present to see his sons celebrate not only victory overall, but also for this now classical Jaguar in the GT class.

Future Formula 1 star driver for Williams, McLaren and Red Bull Racing, David Coulthard, having contested his first – and only – Le Mans 24-Hour race, confessed that: “Before I came here I had the usual single-seater attitude, that they are the best and that’s where the world is, but my eyes have been opened. I underestimated just how difficult Le Mans is. I’ve now got a lot more respect for all the guys who race here…”. 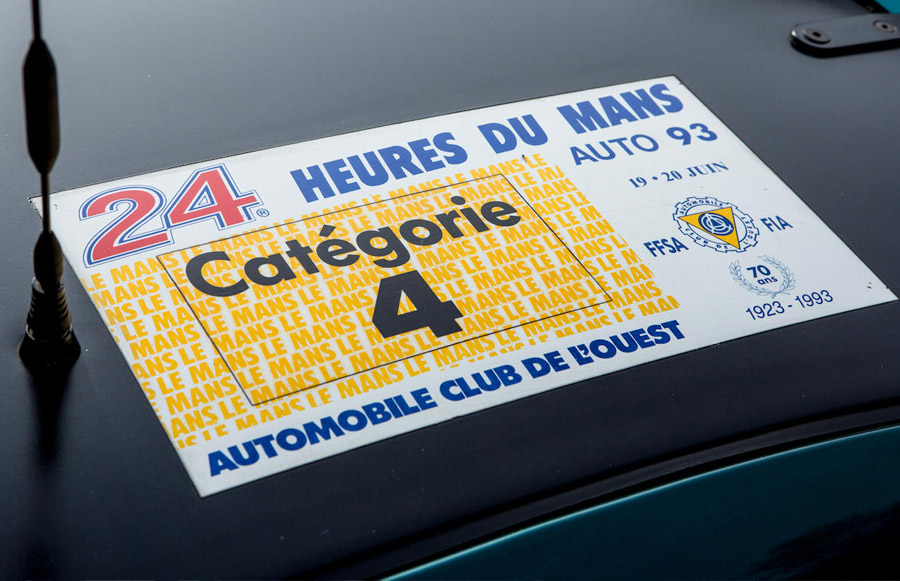 However, post-race – and post-celebration – the ACO ruled that TWR’s pending appeal had not been submitted in time to the Federation Francais du Sport (FFSA) as required. Therefore the appeal was shelved, and Jaguar XJ220C chassis ‘002’s GT class win was ruled invalid, the car and its crew were disqualified, and so Porsche inherited yet another Le Mans GT class victory.

After Le Mans, this handsome XJ220C Le Mans Coupe was retired briefly to the TWR Museum collection before being sold to the Sultan of Brunei. It was then acquired by William Loughran in August 1999 and after another brief intermediate ownership was acquired by the present vendor.

In Millennium Year it was loaned to Jaguar as part of their travelling Jaguar Heritage Display which proved such a great attraction at numerous high-profile venues. David Brabham himself was reunited with it in the 2011 Goodwood Festival of Speed, and it remains a worthy successor to the long line of Jaguar cars which have achieved victory – however transient that might have proved – at Le Mans. Here is a modern-era endurance-racing Le Mans Jaguar of enduring quality, and one with an intriguing story to tell. We recommend this historic Jaguar for any serious collector of the marque, and most particularly for those wanting a part of the Jaguar legend at Le Mans.

The SV was the final evolution and considered the most desirable Miura model.
Read more

The question ‘what’s the best an E-Type can be’ has been answered by Eagle.
Read more
Auction Block