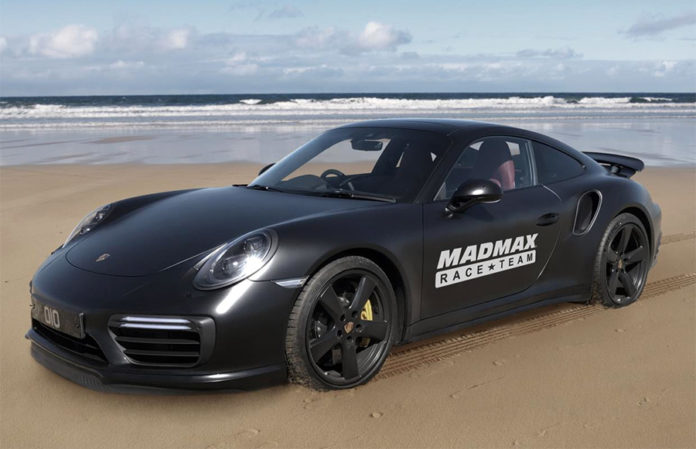 Land speed racer and record-setting motorcycle rider Zef Eisenberg and his MADMAX Race Team have got a new target in their sights. On the weekend of 6-7 April 2019, Zef will aim to become the first person to achieve a British land speed record on bike and car within a year. The goal is to hit 200mph and beyond in a crazy 1200hp specially built road legal Porsche 911 Turbo S on sand.

The attempt will take place at Pendine Sands in South Wales. In May 2018, Eisenberg became the first person to exceed 200mph with a wheel-driven vehicle, at this world famous speed track. He reached 201.572mph on his supercharged Suzuki Hayabusa laying down the marker as the ‘fastest motorbike on sand’ in the world, just 20 months after surviving Britain’s fastest-ever (230mph) motorcycle crash. Eisenberg spent three months in hospital, followed by 3 months in a wheel chair, but defied the odds to race again in under a year.

Since the crash, he’s set numerous records – including an ACU sanctioned flying quarter-mile, flying kilometre and flying mile, on his MADMAX road legal supercharged Suzuki Hayabusa, albeit heavily modified. This ‘twin’ record attempt, however, is something very different, as is the outrageous car that MADMAX Race Team has built specially for it.

“I’m well known for setting records on bikes,” said Eisenberg, “so people started asking me why not cars?”

It got Zef thinking, so after meticulous research into what would be needed to top 200mph on sand, Eisenberg settled on a 2015 550hp Porsche 911 Turbo S. There was just one problem: Although this car is very fast, it will ‘only do 175mph’ in a mile on Tarmac. To achieve 200mph on tarmac within a mile would, the car would need 750bhp at the wheels. Sand creates a lot of resistance and tyre slip, so we worked out that we’d need at least 1000 bhp at the rear wheels, which equates to a crazy 1200hp at the engine, compared to just 550hp from the factory.

The MADMAX race team therefore hand built a bespoke 4.2-litre Porsche motorsport engine with new stronger internals, upgraded Turbo’s, plus a new E85 fuel system, advanced cooling set-up and far more. A lot of work was done to ensure that the monstrous power would come in as smoothly as possible in order to limit wheelspin on the loose surface. To cope with such an extreme output, the gearbox and clutch needed to be extensively upgraded, and the brakes and suspension modified to allow for different wheels and tyres.

“Weight is actually your friend on sand,” said Eisenberg. “It’s about stability – putting enough weight on the tyres to increase traction. Even though, we have accidentally made the car 140kg lighter than standard, we have no need to strip weight out.The car is actually road legal, so we will drive it from the hotel onto the beach and to the restaurant after, hopefully to celebrate.”

For the two-wheeled part of the record, Eisenberg will be riding his specially built 350hp supercharged Suzuki ‘MADMAX’ Hayabusa. The Pendine attempt comes 55 years after John Surtees won the Formula One title, becoming the first – and so far only – man to win the world championship on two wheels and four. It was also in 1964 that Donald Campbell CBE became the first man to set speed records on both land and water in the same year. Pendine is the same venue that Sir Malcolm Campbell raced his aero engine Bluebird to a maximum speed of 174mph in 1927.

“I’ve well and truly caught the speed addiction,” concludes Eisenberg. “It’s in my blood. Each run itself might only be between 25 and 40 seconds, but a new record is just the icing on the cake, after years of research and experimentation. Those who are addicted to speed, will understand – “it’s all about the quest to overcome the challenge and battle the laws of physics.”