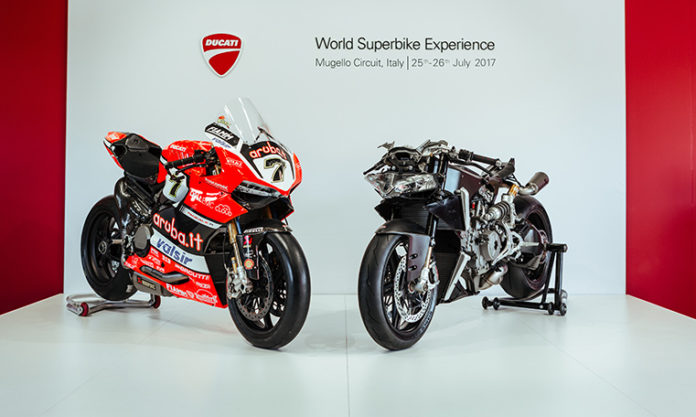 A day at the world-class Mugello race track riding three mind-blowing Ducati bikes: 1299 Panigale S, 1299 Panigale Superleggera and Panigale R SBK, the official bikes ridden by Chaz Davies and Marco Melandri. A dream that could only come true with Ducati. A unique experience dedicated to all 500 purchasers of the stunning Ducati Superleggera, sold out before it even went into production. 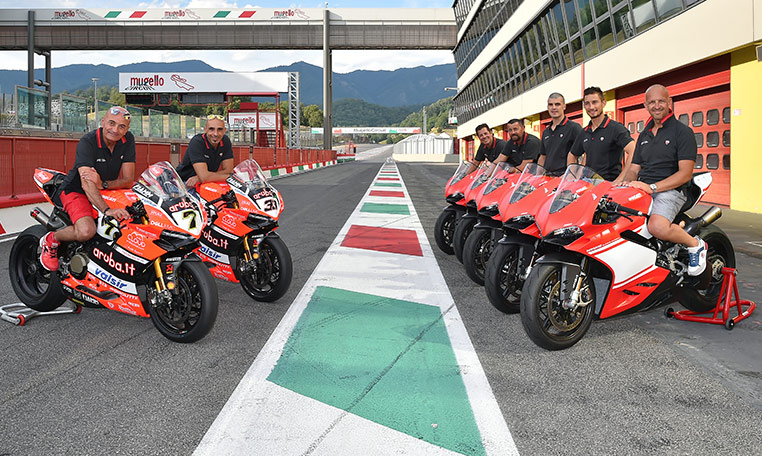 A special gift, an invitation taken up by no less than 193 Ducatisti who were, in turn, accompanied by over 160 guests. Divided into four groups, they came to the Tuscan circuit from 32 countries and were welcomed in a specially reserved paddock featuring the Aruba.it Racing-Ducati Team’s hospitality facility. What’s more, the Audi Driving Experience team was there with the Audi R8 Spyder, and the Lamborghini Huracan Coupé, Spyder and Performante of Lamborghini Test Drive. 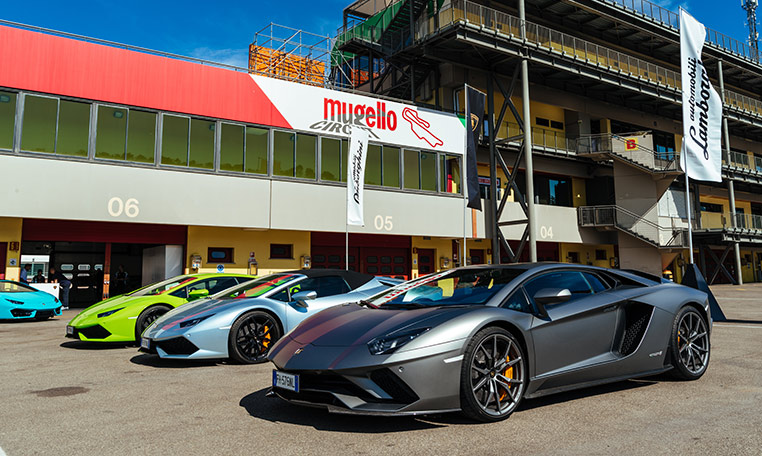 A series of pits were set up for the event, including two “official” pits where Chaz Davies and Marco Melandri’s bikes were waiting to be tried out. Needless to say, the two Superbikes were the stars of this special day, which began with a three-lap session on the 1299 Panigale S, followed by another three on the 1299 Panigale Superleggera and three more on the Aruba.it Racing-Ducati Team SBK bikes. 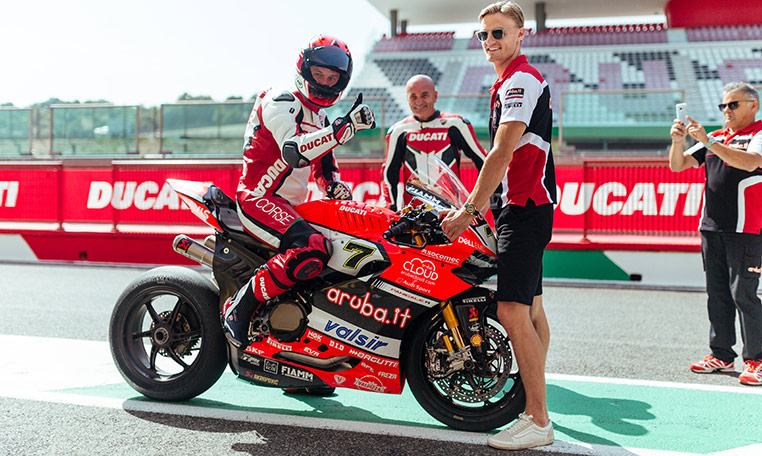 Ducati organised the event down to the last detail to give participants an unforgettable experience. In addition to the entire Ducati Riding Experience instructor team, participants were also able to count on close support, companionship and top tips from Alessandro Valia, Ducati test rider, Danilo Petrucci, MotoGP pro with Team Ducati Pramac, Michele Pirro, Ducati MotoGP test rider and leader of the Italian Superbike Championship, plus, of course, Chaz Davies and Marco Melandri, the standard bearers of the SBK championship’s Aruba.it Racing-Ducati Team.

During the four days at Mugello participants clocked up a total of 7,300 km and 1,737 laps on these three awesome Ducati Superbikes. Moreover, 170 Pirelli tyres were used throughout the event, with Pirelli offering a complete assistance/change service. 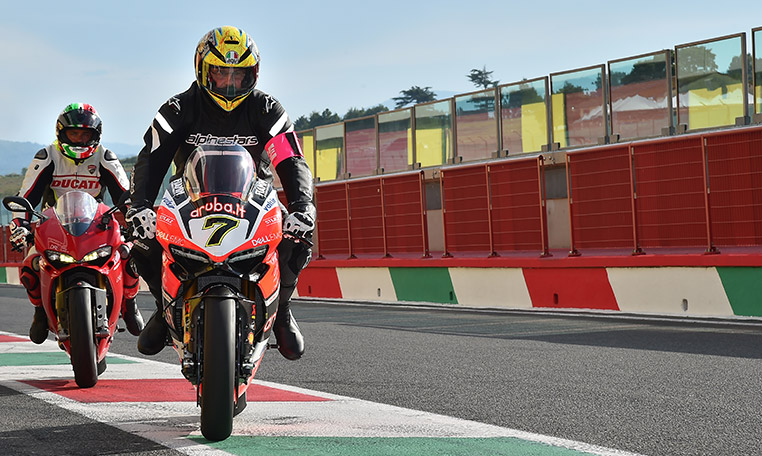 The 1299 Panigale Superleggera is the world’s most exclusive, technological, highest-performing road bike thanks to its monocoque frame, carbon fibre swingarm/wheels and the most powerful version of the Superquadro. Thanks to its 215 hp, the EURO 4 desmodromic engine on the 1299 Superleggera is the most powerful factory twin-cylinder ever built; it incorporates the very highest levels of Ducati technology.

“It was a unique experience” said Italian participant Federico Tofani, proud owner of a 1299 Superleggera. “Riding a Ducati Superbike is a dream come true. Thank you Ducati”. 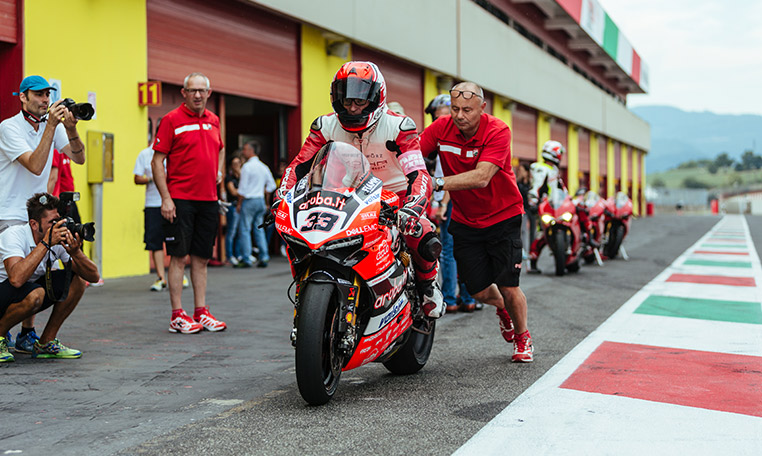 Clement Frenk, who arrived at Mugello from Luxembourg, was equally enthusiastic: “It was unbelievable! A huge gift from Ducati that gave us a chance to ride three astounding bikes. The guys at Ducati did an incredible job. Thanks”.

Dutchman Jean Claude Luijcx: “I didn’t sleep a wink the night before the test. The 1299 Panigale S is an awesome machine, but the difference in the step-up to the 1299 Superleggera is mad. And you experience the same breath-taking difference when you ride the Superbike. Simply unforgettable!”.

Vito Dionizio flew in from Texas: “When I heard I’d be riding the Aruba.it Racing-Ducati Team bikes it took me a while to realise this was no dream. I mean, no-one’s gonna let you ride an official Superbike, are they? No-one. Or, rather, no-one except Ducati”. 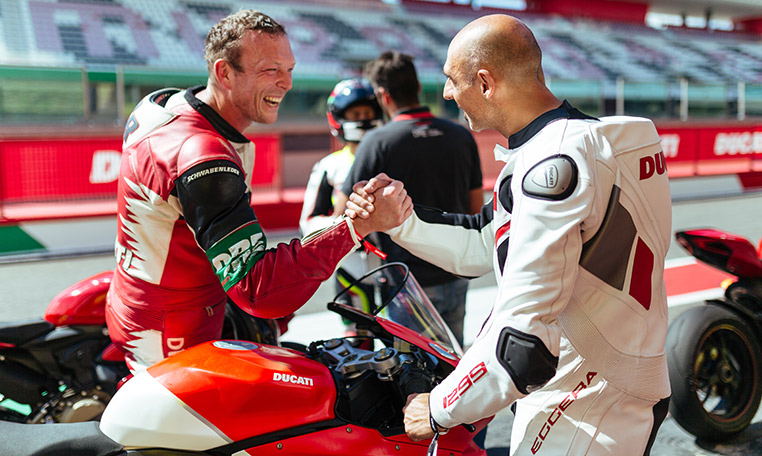 Frank Duenas Jr. from California had this to say at the end of the day: “An experience like this makes you realise how much the customer is a part of Ducati. No other motorcycle manufacturer could offer its customers anything like this. We buy the bike and the brand – and only a brand like Ducati knows how to gift you an experience of this kind”.

Bernhard Marquart, from Germany: “I was blown away by the superb organisation. Taking part in an event like this makes you feel like one of the family. Being able to ride an official Superbike… a dream!”.

David Gallant, instead, came all the way from Australia: “What an amazing event! It was great starting the test with the 1299 Panigale S to get a feel for the track and then move on to the Superleggera and, lastly, the Superbike. A once-in-a-lifetime experience”.