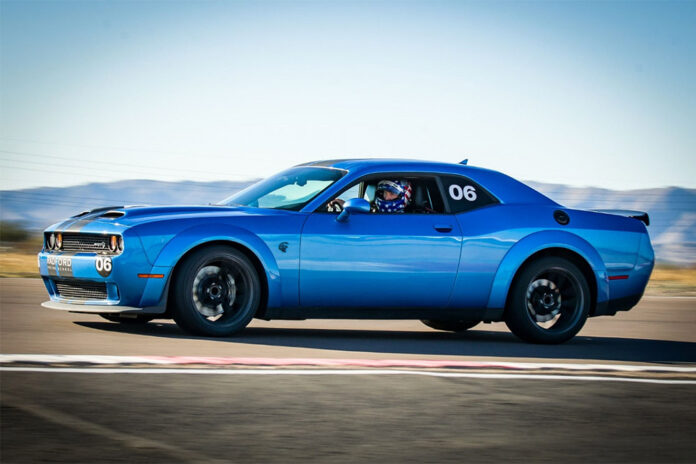 When owners take the keys to their new Dodge SRT vehicle, their dealer also hands them a ticket for a day at the Radford Racing School in Arizona. Dodge not only wants owners to enjoy their cars, but learn to appreciate their capabilities and develop skills that will enable them to stay safe.

SRT stands for “Street and Racing Technology.” The Dodge SRT division is responsible for adding the performance edge across the Dodge line-up. Dodge not only underwrites the cost of tuition, they also provide $5 million worth of cars to the Radford team so that owners have the best experience possible with cars that are the closest to the ones in their home garage. That is big commitment and a lot of trust to put in a school. The Speed Journal sent principal Jeff Francis to find out what the one-day Dodge SRT owner course was all about. 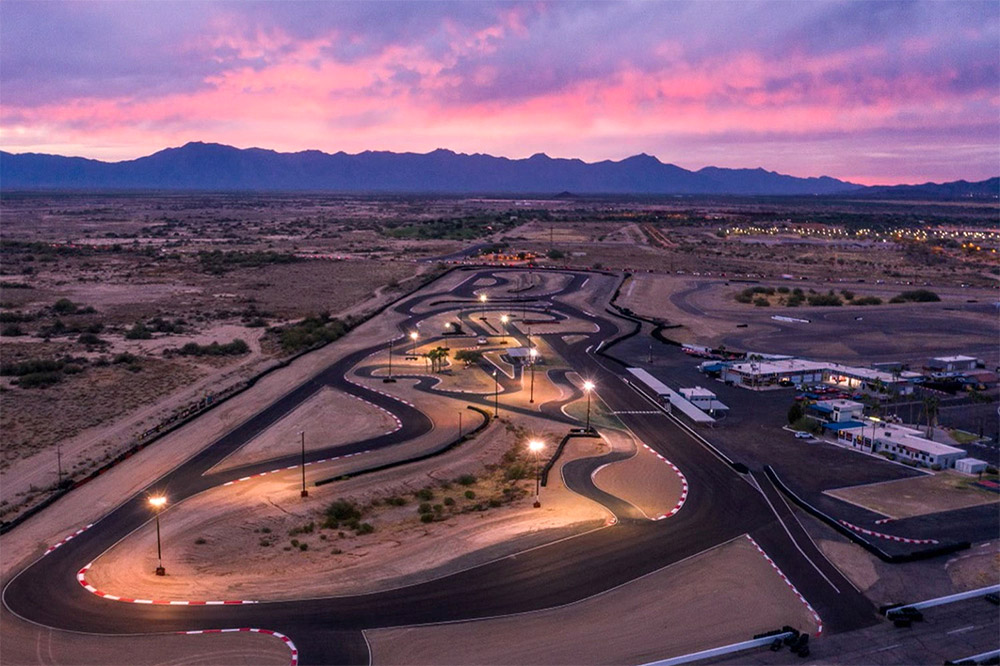 The Radford name is new to the American driving school scene but the venue and bones have decades of tradition. Bob Bondurant raced in the 1960s, driving with distinction on both American and European road courses. After his professional driving days, in 1968 he started and ran the Bondurant High Performance Driving School. It became the template for driving schools, where thousands of attendees improved their high-performance driving skills due to his courses.

The Radford Racing School took up the reins in 2021 after the Bondurant school closed. The Radford team renamed and relaunched the school and rejuvenated the facility, keeping the mission alive. 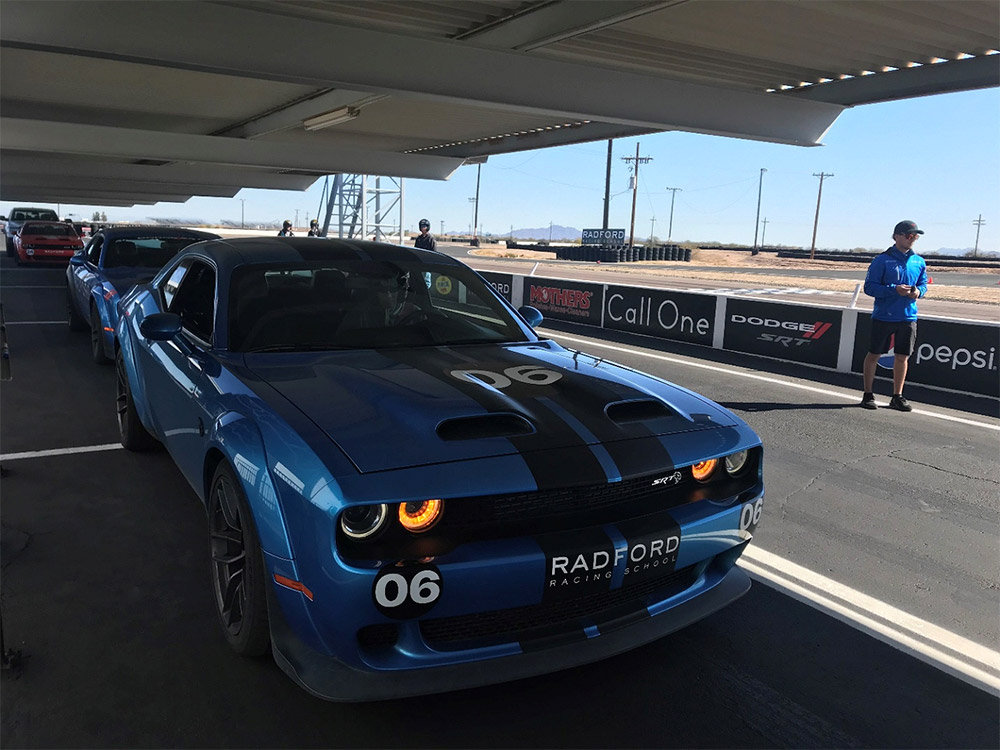 The Radford facility is located a short drive south of Phoenix Airport. When Francis arrived, he found about fifty Dodge SRT owners eager to get started. For many, it was the first time in an environment with so many others sharing the same passion. Common bonds quickly formed as people shared stories of their vehicles ranging from Durangos and Chargers to various flavors of Challengers. Seeing robust SRT brand loyalty enthusiasm was refreshing. Cultivating and supporting this enthusiasm is another reason Dodge supports a day at Radford for SRT owners. 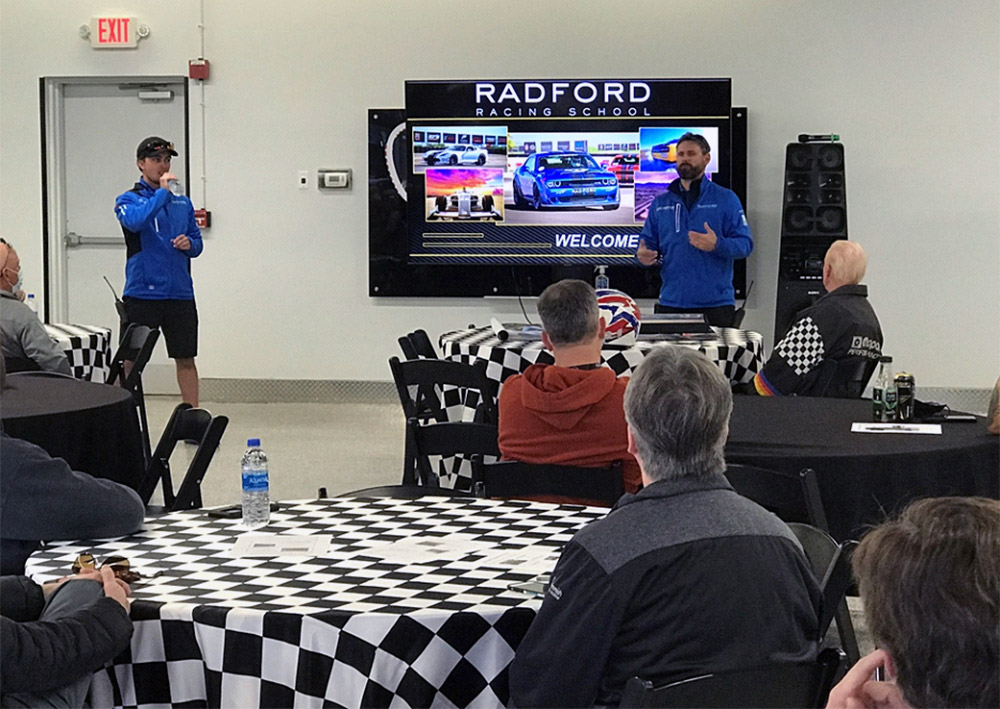 Instructors, including Chief Instructor Danny Bullock and multi-time SCCA National Champion BJ Zacharias, kicked off the day with classroom time. Bullock outlined the school’s goal: educating owners of the reasons for a car’s responses, and improving a driver’s crucial response abilities in accident conditions, especially at speed. He noted that a professional race car driver knows every detail of a crash and can re-construct it afterwards. Responses like “I don’t know what happened” or “it came out of nowhere” won’t help a professional career. 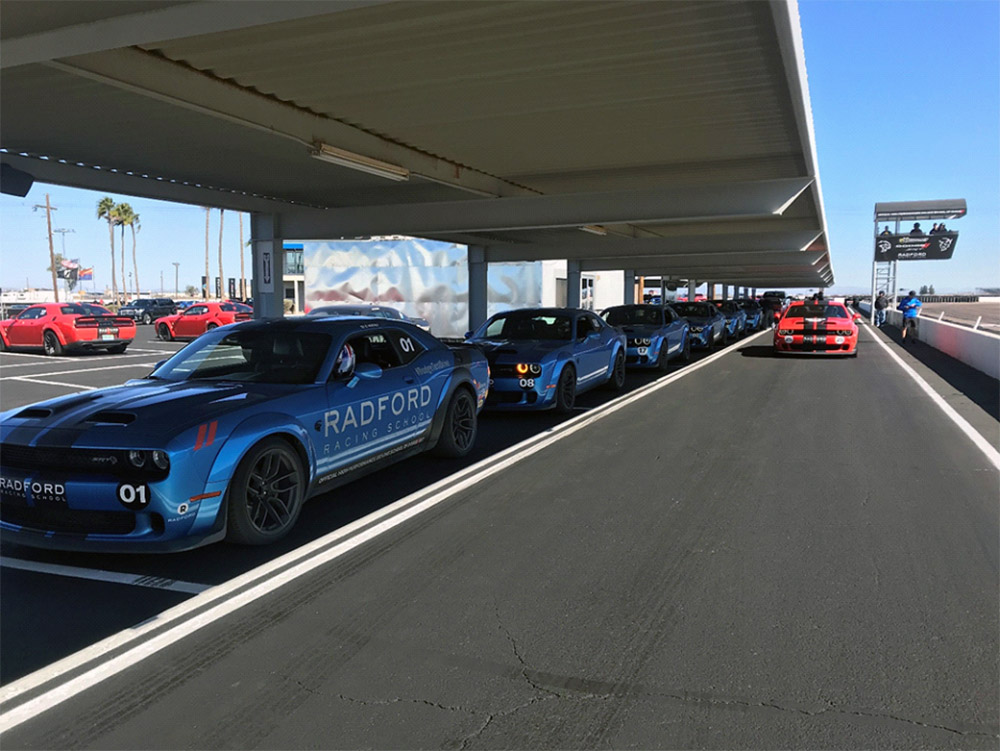 While a fleet of Challenger Hellcats waited outside, instructors established fundamental concepts starting with sight lines. A car tends to follow the driver’s eyes. Learning to look ahead to the right place and maintaining awareness of surroundings are skills to be developed and honed.

Next they addressed weight transfer and vehicle dynamics. Muscle cars tend to be larger, heavier and often more powerful than sportscars. The transfer of weight during acceleration, braking and turning has direct impact on available grip and car control. Sharp accelerating pushes weight to the rear and steals grip from the front tires. Losing grip on the front tires makes it more difficult to turn the car, often resulting the car skidding or sliding straight ahead (known as understeer). By contrast, sharp braking pushes weight to the front which presses the front tires into the pavement but lifts the rear of the car and reduces the contact patch with the pavement for the rear tires. With less grip at the rear, the odds of rotation increase (known as oversteer). 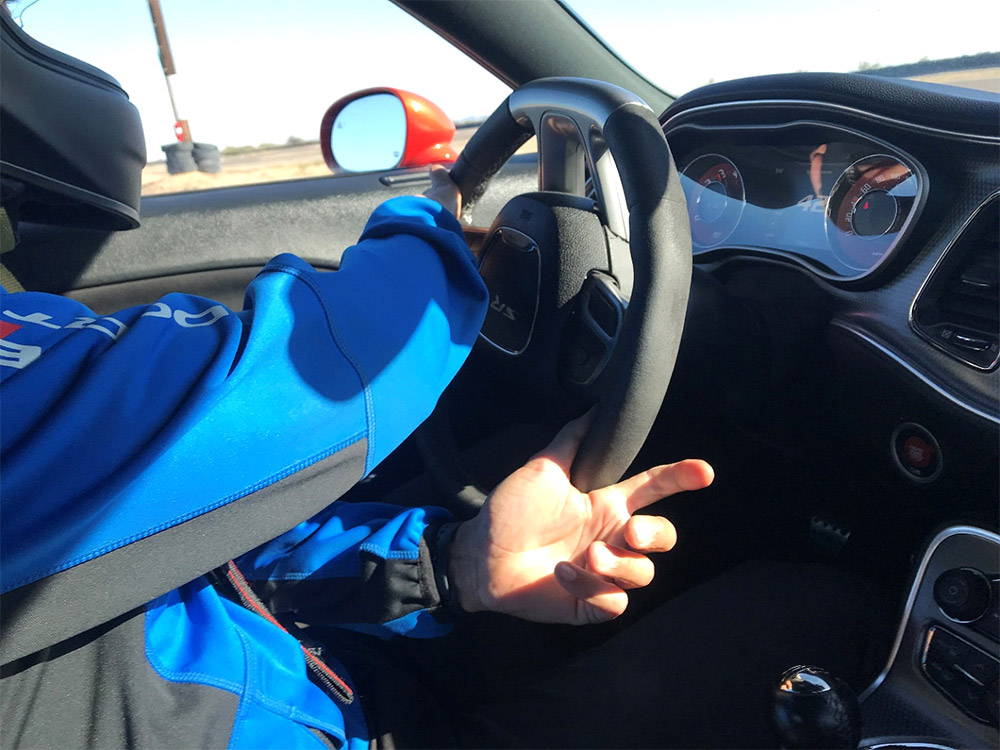 Understanding these concepts and how to respond is critical for car control. For example, merely coming off the gas shifts weight to the front and increases front tire grip without using the brakes at all. Similarly, a bit of throttle will push weight to the rear improving traction and reducing the chances of a spin. Knowing how to use the accelerator helps reduce the burden on the brakes. While brakes are strong, they can only do so much to keep muscle car power and weight under control.

The instructors also highlighted the need to be smooth. Effective driving isn’t dramatic – smooth inputs is the ideal. Think in terms of a chauffeur that drives to give their passengers a gentle ride. Good driving skills not only make each owner a better driver, but provides knowledge to pass along to kids and family. (Radford also offers teen driving classes for owners who want their children to get their own direct experience.)

Lessons learned at Radford are not limited to the SRT line-up. The Hellcat is designed to engage the driver. Since it isn’t stuffed with driver aids included in many modern exotic sports cars, the larger high horsepower Hellcat makes a driver think. If you can learn to drive a Hellcat, you can transfer those skills to other cars. 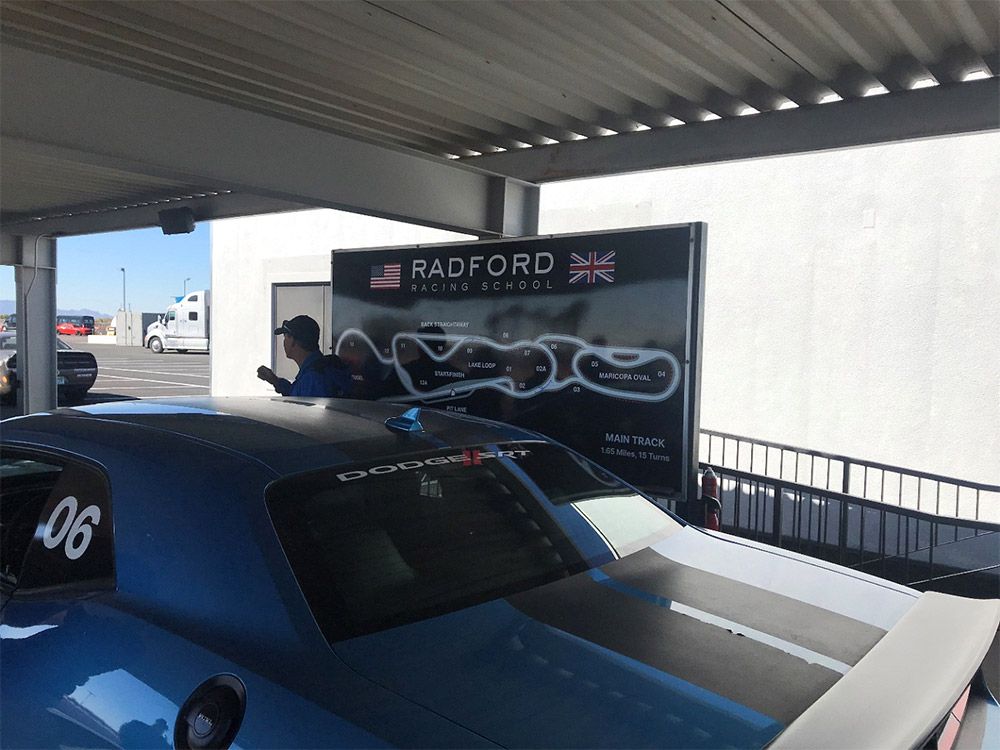 With classroom time finished, the group moved to find their mounts. Red and blue Hellcats equipped with beefy Pirelli P Zero tires would soon be tested. Some cars had eight speed automatic transmissions with paddle shifts. Others were outfitted with traditional six-speed manual transmissions.

Bullock discussed the need to mindfully shift the manual transmissions. The dreaded “money shift” results when the driver intends to shift from second to third, but inadvertently deposits the selector in first. The tachometer spike can inflict costly engine damage. One way to avoid this mishap is better hand placement on the gear lever. An open hand using the palm to guide the lever instead of a closed hand grabbing and moving the lever is a small technique tweak with a big potential benefit. 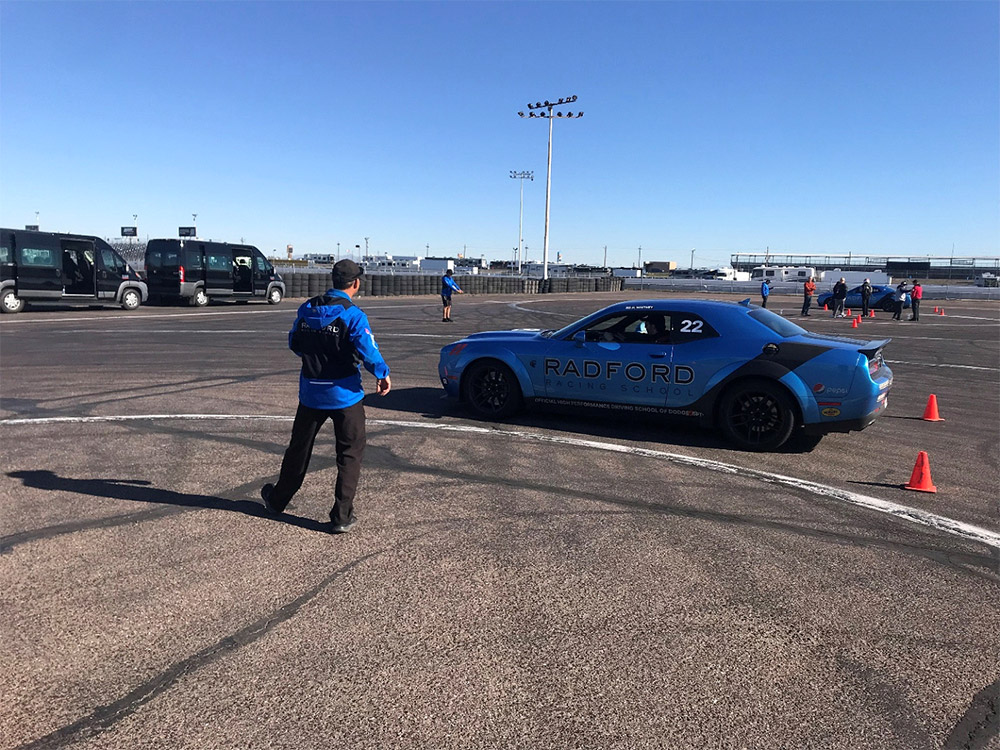 To get everyone warmed up, the group separated into teams of five drivers each. Each team shared one car for a relay race. Two separate courses were laid out side-by-side which allowed each team to watch the other’s progress. A Hellcat was parked in a cone box to start. The first driver completed a U-turn, sped through a high-speed slalom, then returned through the same cones back home where they parked in the cone box. They got out, tagged the next driver who repeated the sequence. 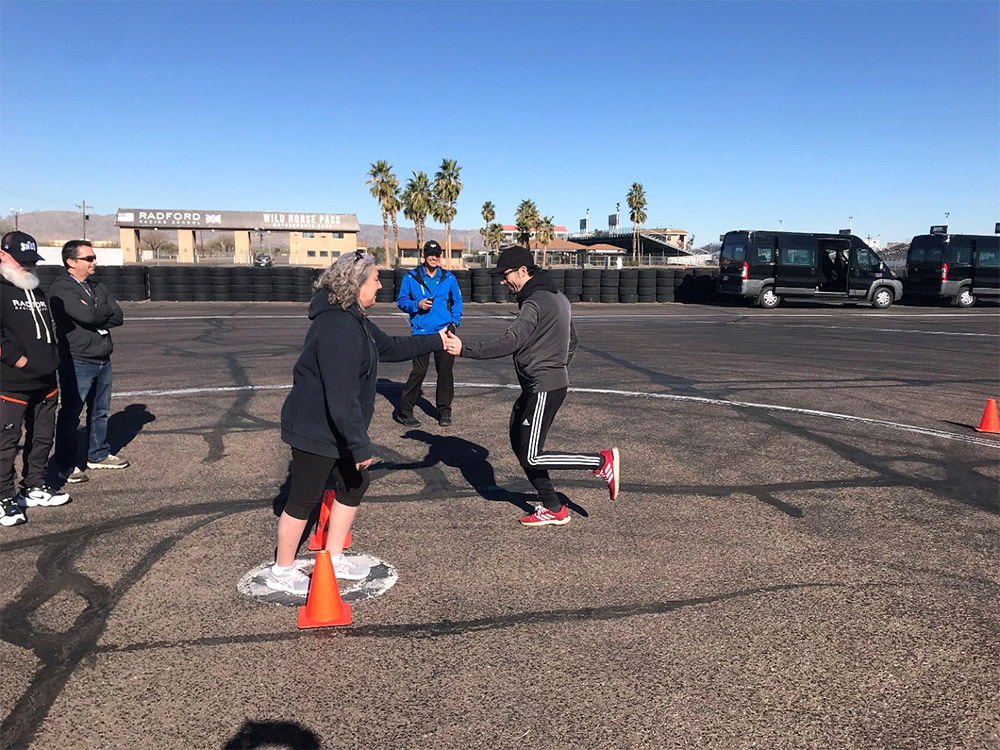 The head-to-head competition was intense. It not only introduced students to the Hellcat at speed, but it was a great icebreaker to meet and interact with others. 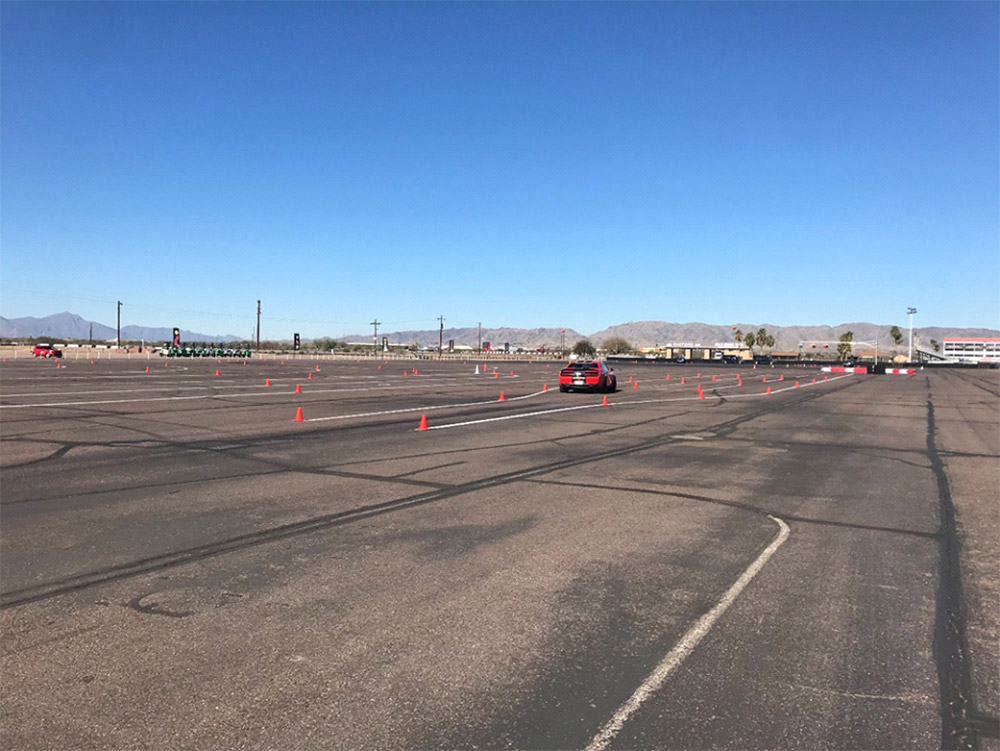 Next up was an accident avoidance exercise. Two guests shared each car and switched back and forth for runs. Drivers settled themselves into a proper driving position, set their hands on the steering wheel at nine and three, and found the brake pedal. They drove straight towards a split with three lanes, each with a light above the lane showing a green light. Just before the split, an instructor switched two of the lights to red, leaving a green light in one lane to represent the open path in an accident scenario. Students not only learned to maintain vision and respond quickly, but became familiar with avoiding and driving around an accident with steering control rather than simply panic braking in a straight line.

The runs started at 30 miles an hour and worked up to 45 mph in 5mph increments. What was relatively easy became more challenging at higher speeds. However, the greater speeds also helped to reinforce the idea that the car will follow the driver’s eyeballs. 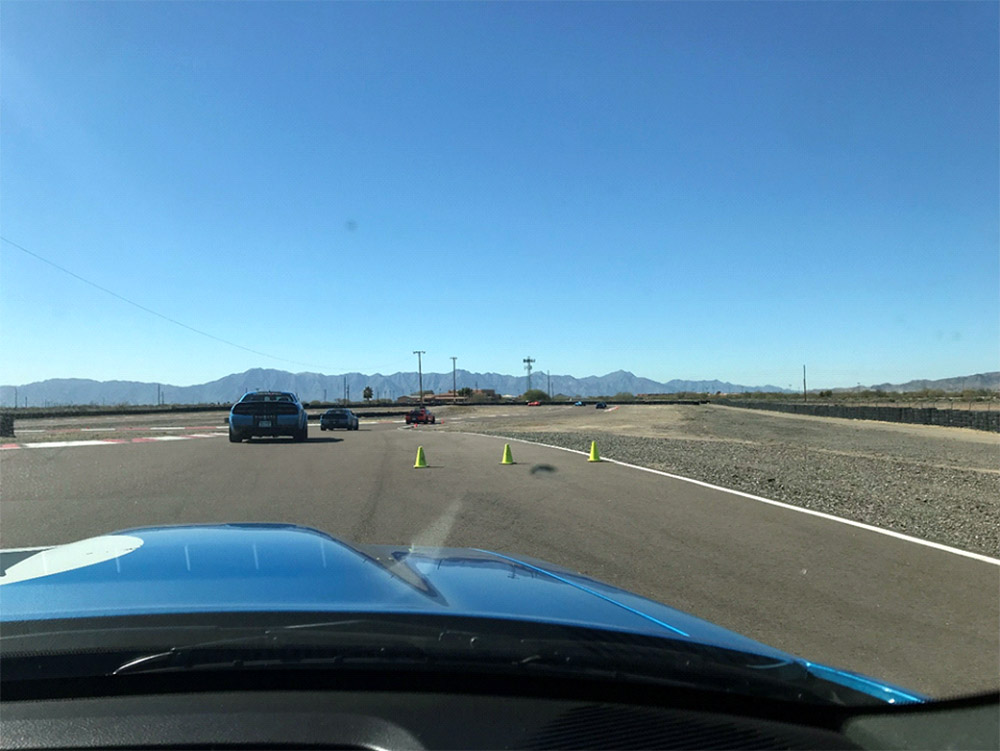 Lunch beckoned for a mid-day break and a chance for all to catch their breath. It was a good opportunity for guests to meet each other and swap stories from the morning.

Fortified with food, the 15-turn road course circuit was up next. Two students shared each car trading places as driver and passenger. Instructors set up lead-follow laps and increased the pace as students showed competence. 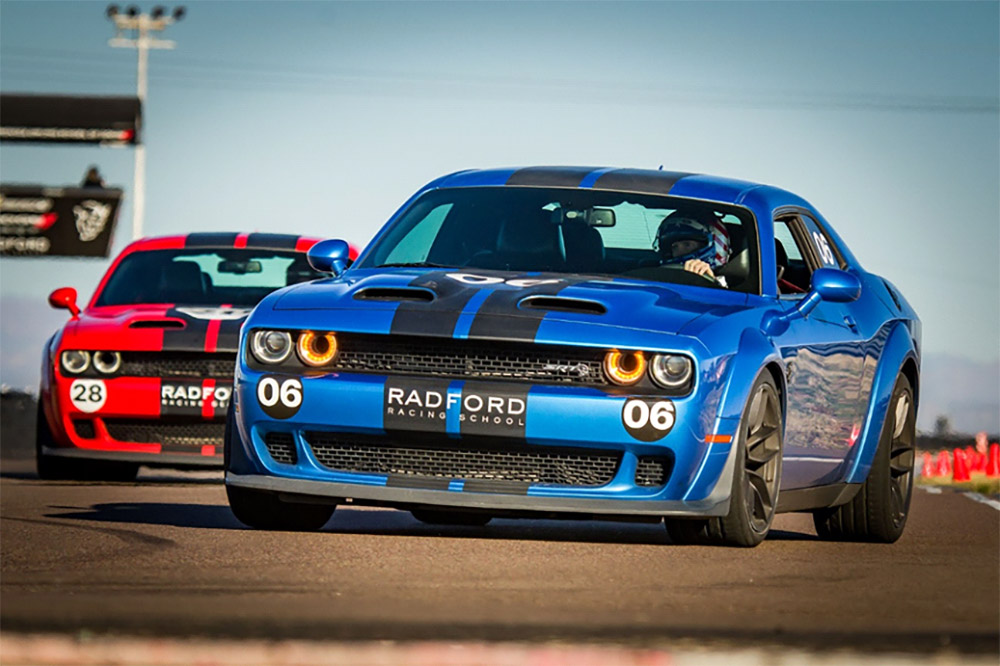 The 1.6-mile ribbon of asphalt had enough space to let the Hellcats run and make use of the 500 ponies under the hood. The course traces its roots to the Bondurant School and its founder and namesake, legendary driver Bob Bondurant. Bondurant used his racing driver knowledge to design a course that mixed a taste of common race circuit features including a slower chicane, fast sweepers, and elevation changes. 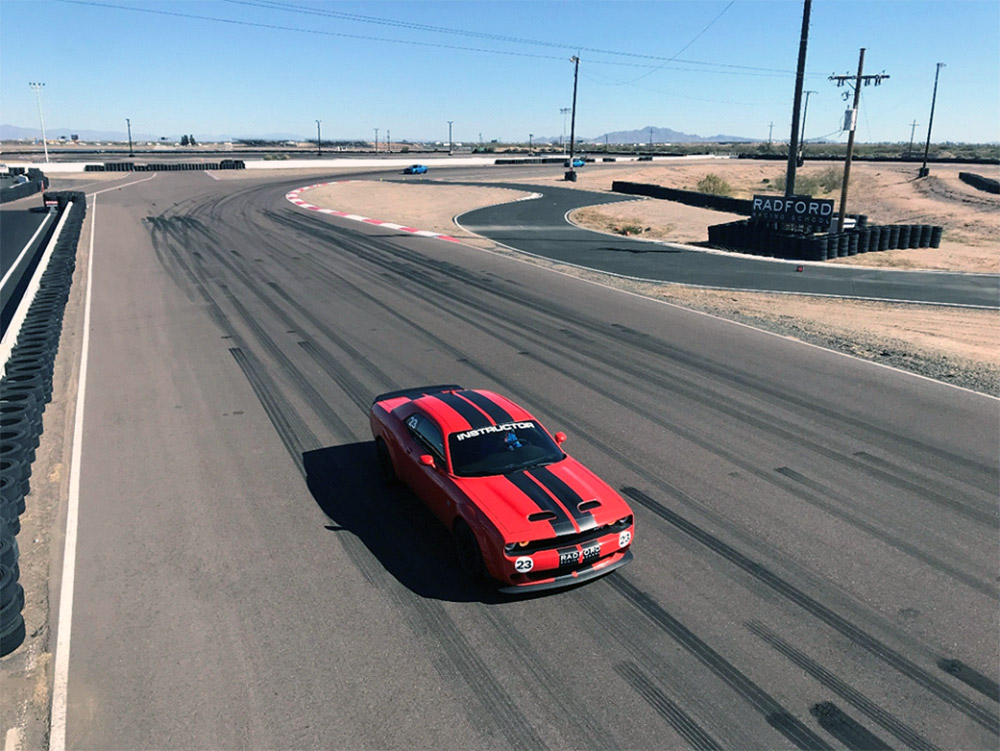 The muscle cars shined on the road course and the Hellcats were able to make use of their prodigious power to claw their way forward. Utilizing the techniques from earlier in the day, the road course time gave students a thrill and also a taste of what was possible. 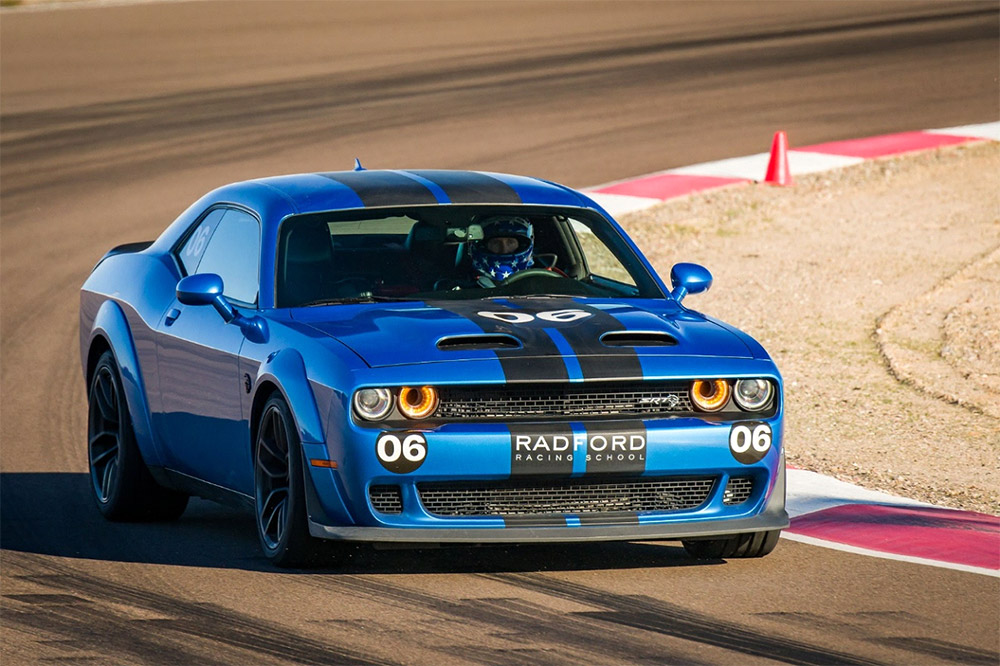 Armed with a foundation of skills and time to become acquainted with the Hellcat, the autocross course added the challenge of a stopwatch. Instructors set a twisty and narrow path across the pavement bordered by orange cones. The tight course rewarded finesse and removed the crutch of high horsepower to make laptime. 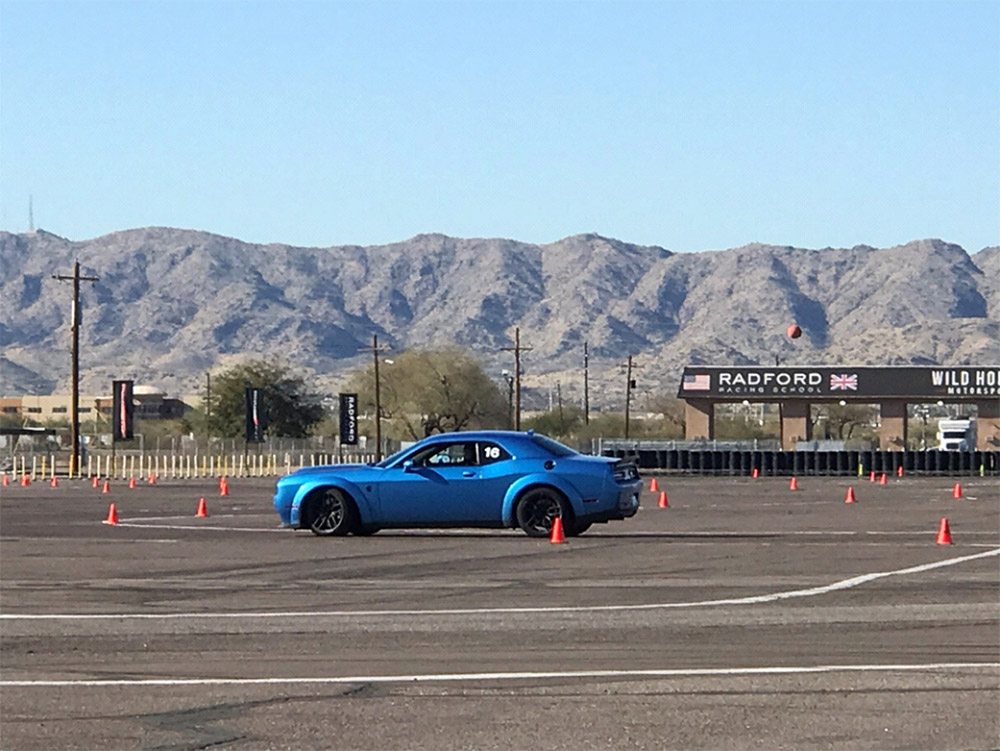 Instructors ran a demonstration lap and then each student had three timed runs. Once again, two students shared each car and traded spots as driver and passenger. Students quickly learned that they could not force the cars through the tightest parts of the course. With lower speeds and no walls, students could also truly push the Hellcats to their limits. Managing momentum, particularly through judicious use of the brake pedal, was more important than outright horsepower. Muscle cars aren’t typically known for their agility in tight quarters, but the Hellcat was very impressive and a huge amount of fun to toss around. 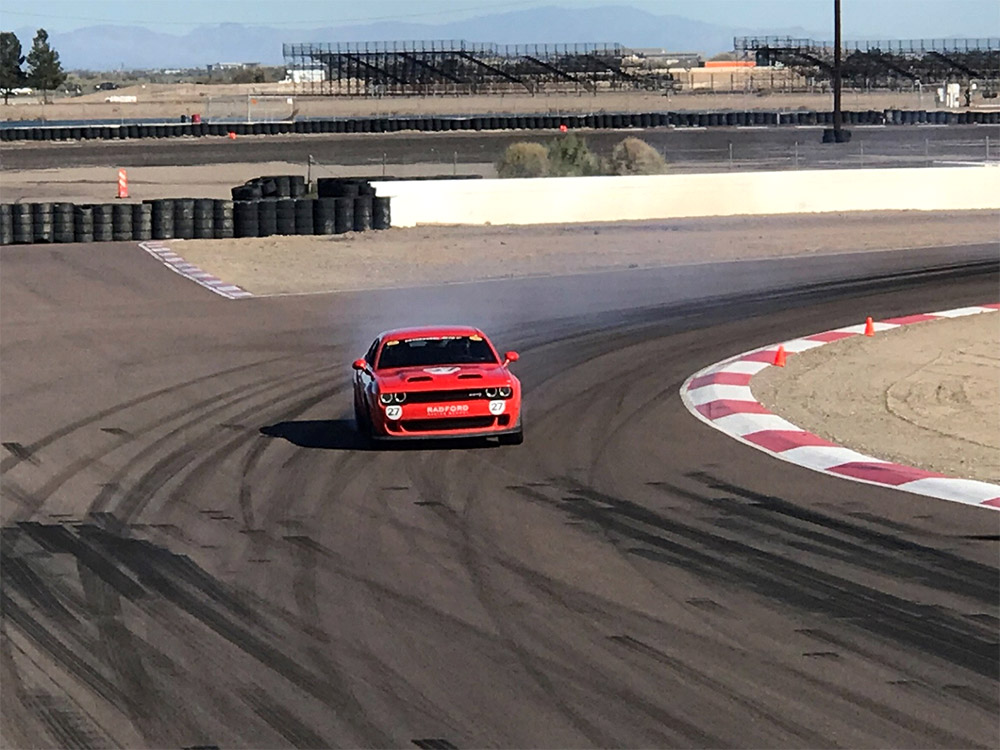 Even though driving the Hellcats was a blast, riding with a professional driver around the course for the grand finale was a thrill in itself. Demonstrating their skills, they uncorked the Hellcat’s true capabilities while managing the Hellcat’s weight, and deftly dancing on the throttle and brake to rotate around the turns. The Hellcat catapulted down parts of the track that had any hint of a straightaway. 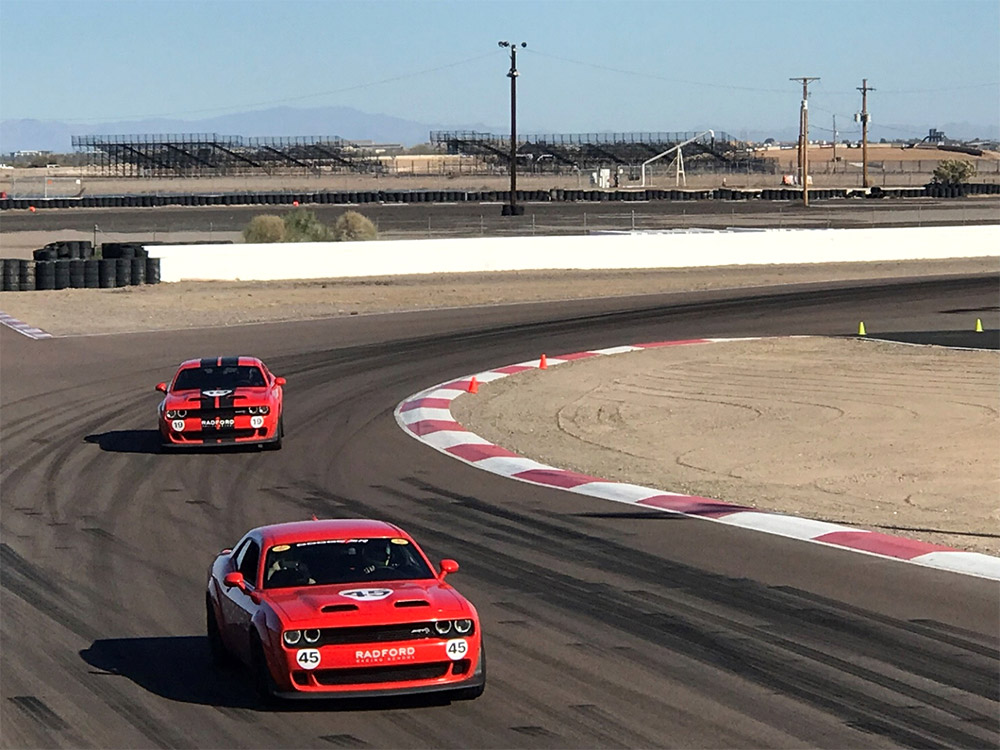 The entire experience was a testament to the leadership of Chief instructor Danny Bullock and the other Radford instructors. Their vast racing experience, energy, encouragement, and education made sure the SRT owners had fun, built driving skills and deepened their enthusiasm for the brand. After spending a day at Radford, it is easy to see why Dodge supports the program. 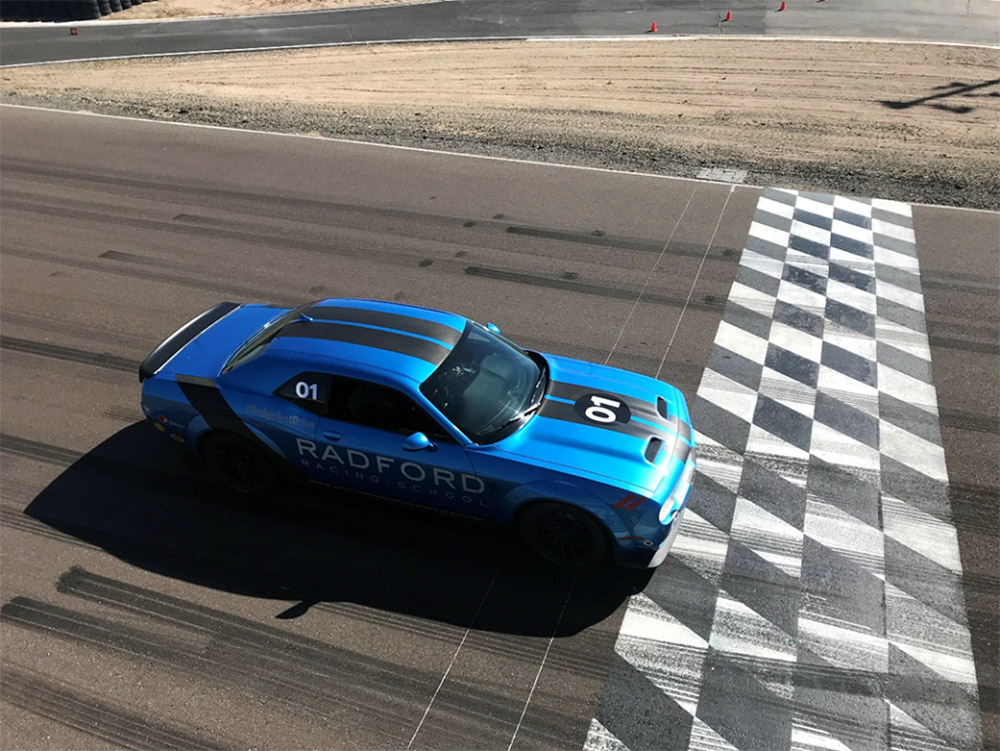 The Speed Journal would like to thank the Radford Racing School for the hospitality and recognize Dodge for its ongoing sponsorship and support of Radford for the Hellcat driving experience.