Imagine you’ve recently assumed the controls of a well-known driving school in Arizona. You have a facility blessed with sunny skies throughout the year and the opportunity to utilize the best from the past, while relaunching with a new perspective. Wh … 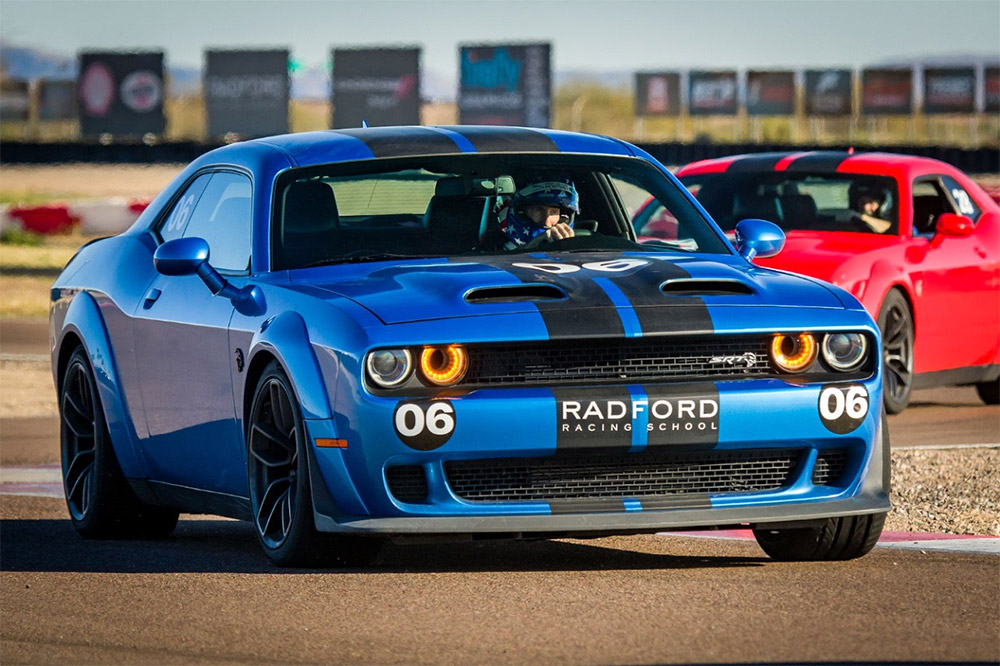 Imagine you’ve recently assumed the controls of a well-known driving school in Arizona. You have a facility blessed with sunny skies throughout the year and the opportunity to utilize the best from the past, while relaunching with a new perspective. What kind of driving experience would you highlight? If you are the Radford Racing School that recently took over operations of the Bondurant High Performance Driving School, the answer is to find ways to get guests behind the wheel of a fleet of Dodge Challenger SRT Hellcats. 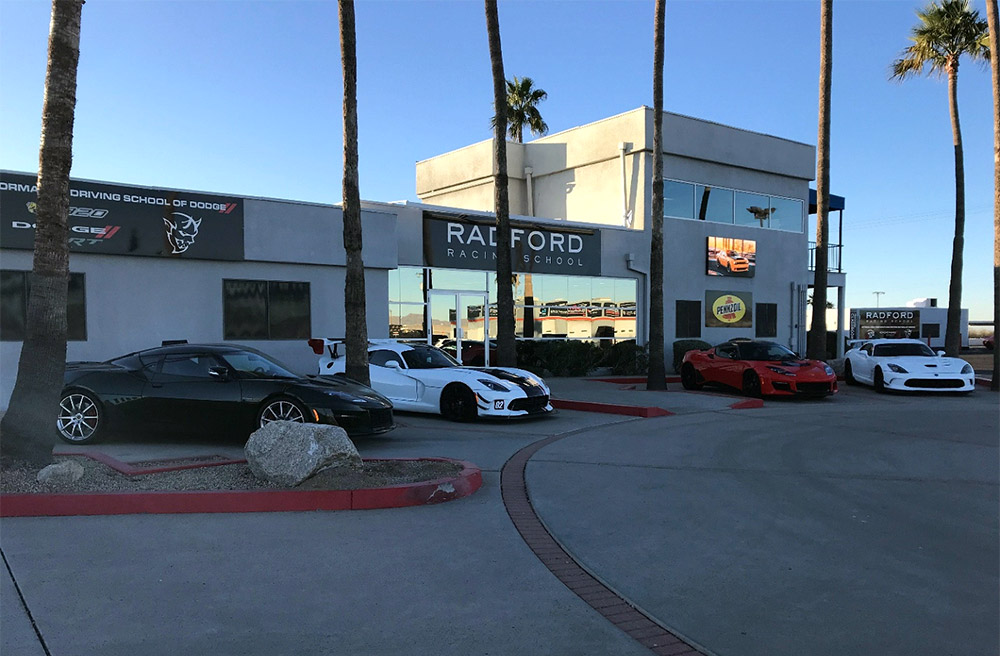 The Speed Journal sent resident driver Jeff Francis to explore the new Radford Racing School from behind the wheel of the mighty Hellcat. While the Hellcat is dubbed as a muscle car, it is not all about power. The big cat can dance around corners too. The Radford program showcases its agility on autocross and slalom courses, a skidpad, a short oval and a road course. 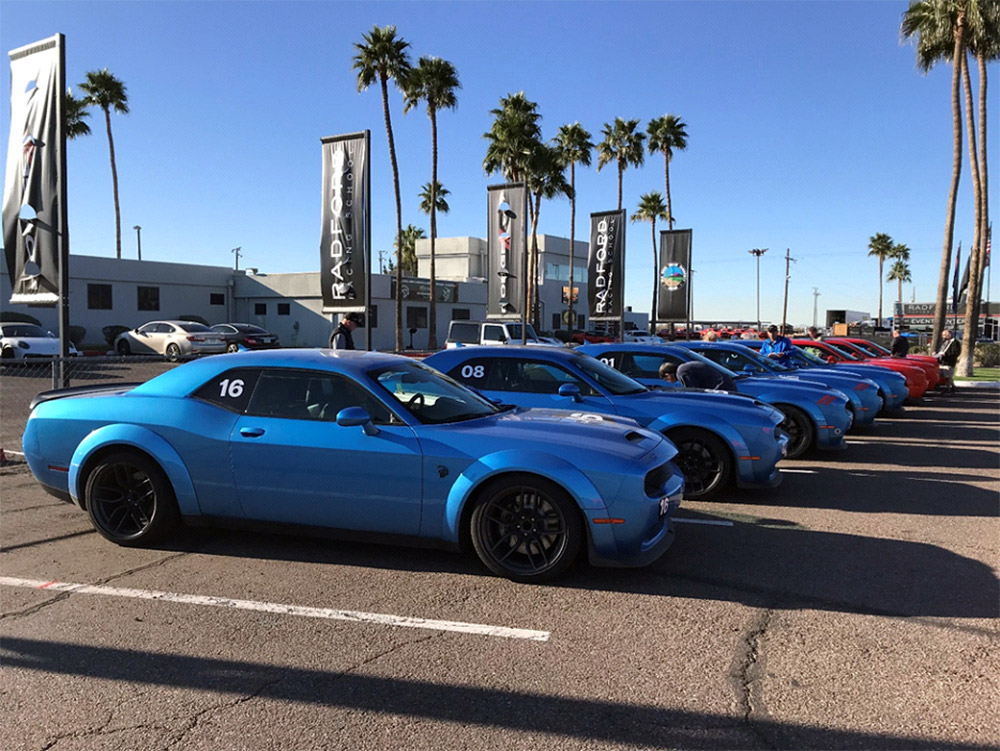 While owners can take the controls of a school car to better understand their own car’s capabilities, the program is open to everyone, including non-owners. Considering a Hellcat? A day at Radford is a better test drive than any dealership can offer. Just looking for a fun driving day in the Arizona sun? Radford offers an unforgettable experience.

On the day Francis visited, instructors Rob Knipe and Brock Nelson looked after a dozen students. Most attendees were not Dodge SRT owners but were there for a high-performance driving experience. 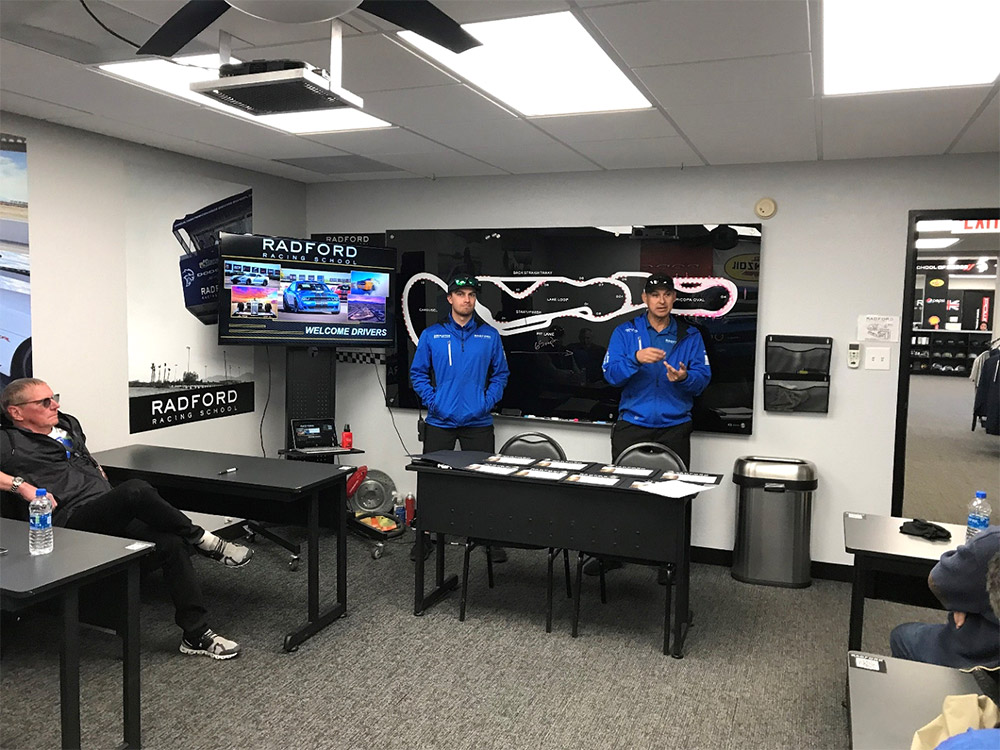 Before putting the muscle cars in motion, Knipe and Brock led the group in classroom time to set the stage and highlight driving skills that would later be put to use. While the Hellcat is armed with power, the goal is to pilot it more like a ballet than a wrestling match. The instructors emphasized keeping focused eyeballs on where the driver wants to go, that is, opening up the field of vision. Looking through a corner to where you want to go rather than where the car may be going helps pull the car in line, while also making for a safer and more competent driver. 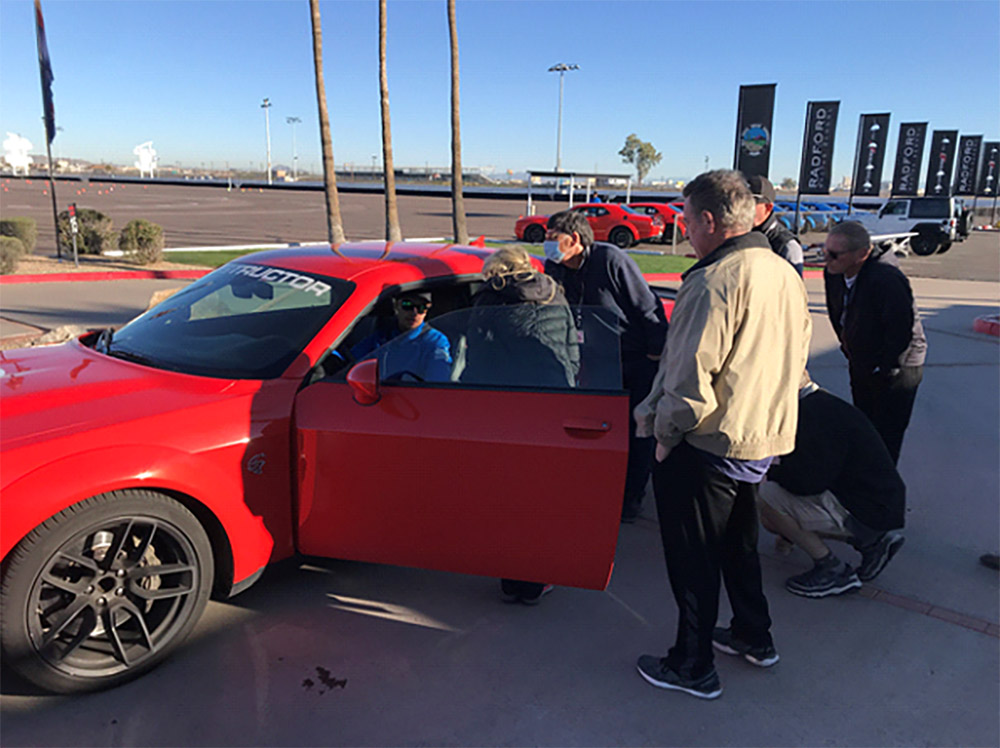 The instructors used a sliding car as an example. When a car starts to slide, the driver feels it, but maintaining a focused sightline helps the driver to combine feel and vision to correct the slide. Good sight lines also help facilitate hand-eye coordination. Weight transfer is another way a car communicates with the driver. The feeling a driver gets in a pure race car compared to a performance road car compared to a daily driver is materially different, due partially to the feeling of the car’s weight moving back and forth through corners. 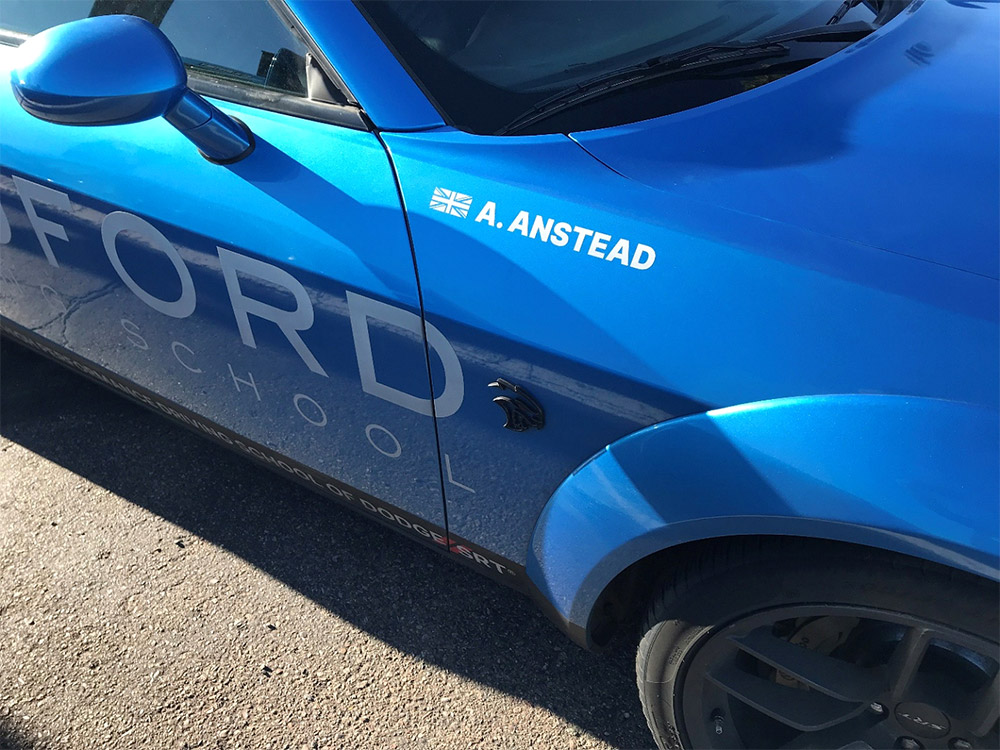 Using the sight lines to precisely place the car in the ideal spots into, through and exiting corners is crucial. The feel of the car’s movement, the sight lines through the corner, the hands on the wheel to place the car join together with the decisions of braking and acceleration into and out of a corner. The combination of inputs and quick responses makes a strong driver. Quick racing drivers minimize the drama in the cockpit. They work with the car, instead of fighting it and forcing it into submission. 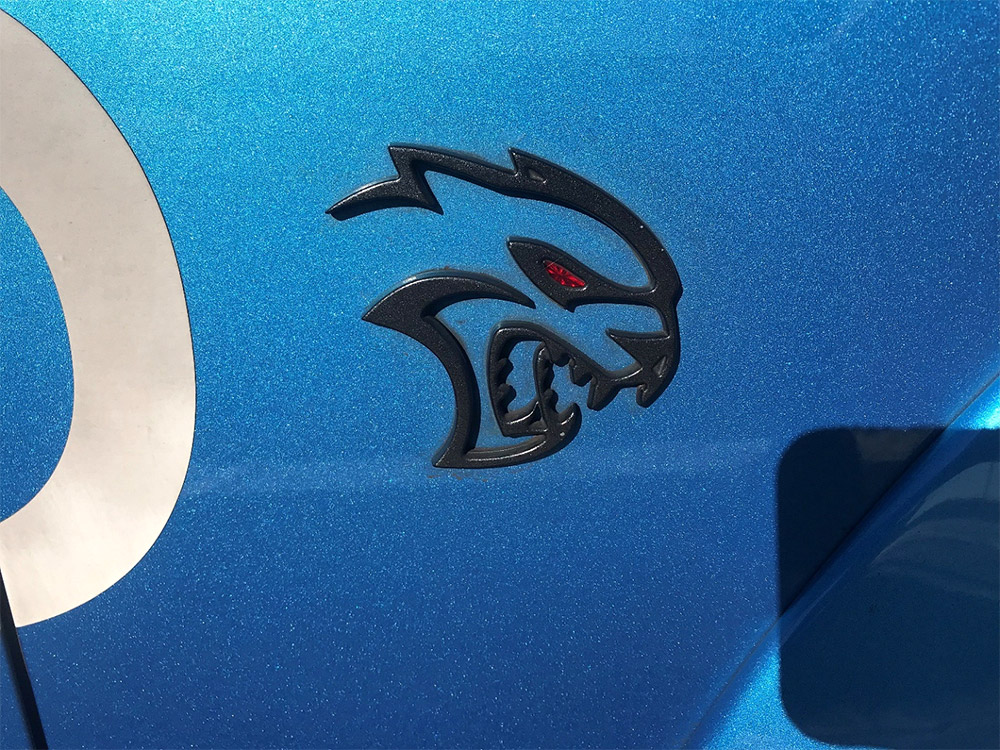 The supercharged Hellcat Redeye is a wide-body beast that comes with two keys. The “basic” black key fob is good for 500 horsepower. A red key fob unlocks an additional 297 horsepower boasting a ground pounding 797 HP. Given the school’s focus on driving fundamentals rather than outright speed, the red keys went unused. Five hundred horsepower connected to the pavement through giant Pirelli P Zero tires was plenty to entertain the attendees. 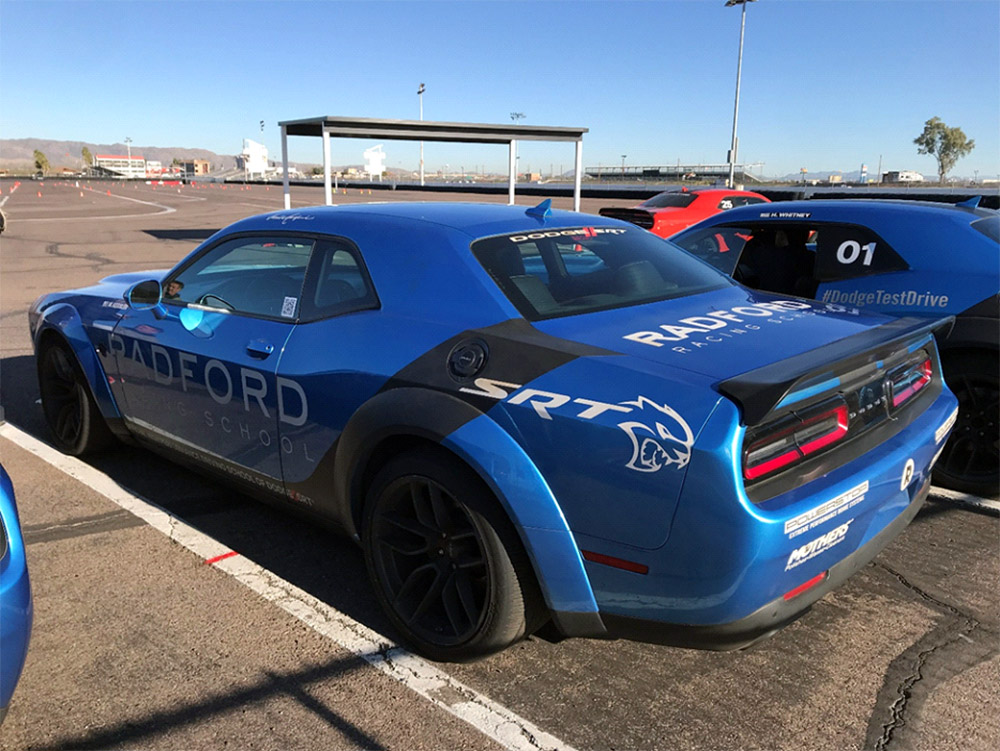 Accident avoidance kicked off the driving program. Students settled themselves into a proper driving position, set their hands on the steering wheel at nine and three, and found the brake pedal. They drove straight towards a split with three lanes, each with a light above the lane showing a green light. Just before the split, an instructor switched two of the lights to red, leaving a green light in one lane to represent the open path in an accident scenario. Drivers not only learned to maintain vision and respond quickly, but became familiar with slamming on the brake pedal and trusting the anti-lock brakes. The anti-lock brakes prevented the wheels from locking up completely which would have resulted in a loss of steering control. 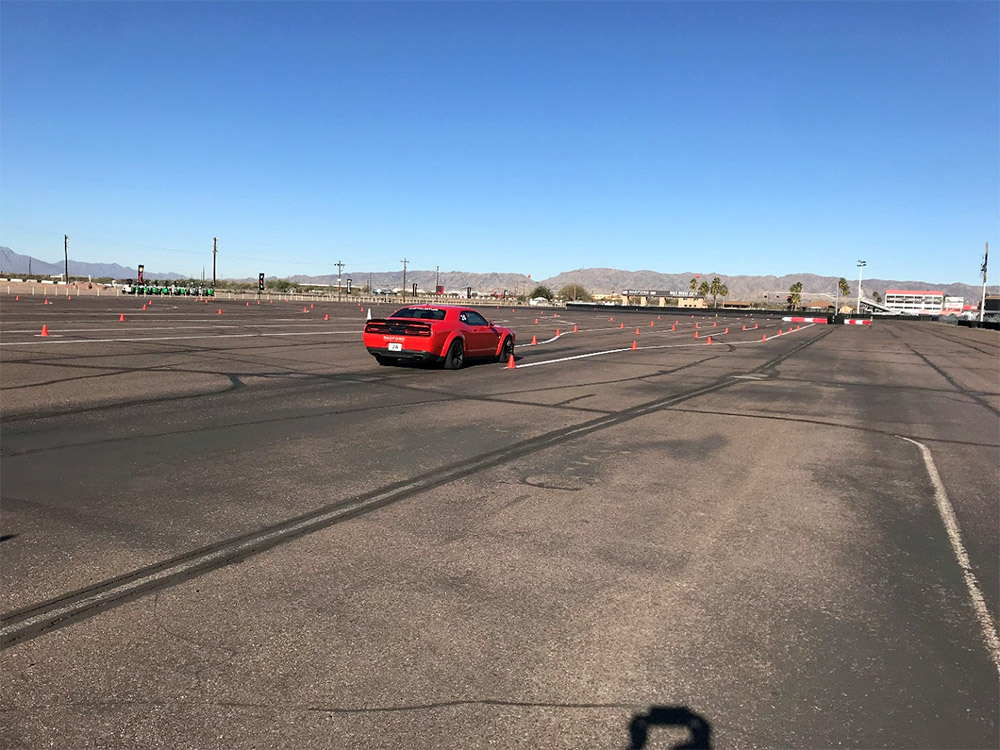 The runs started at 25 miles an hour and worked up to 45 mph in 5mph increments. What was relatively easy became more challenging at higher speeds. However, the greater speeds also helped to reinforce the idea that the car will follow the driver’s eyeballs. 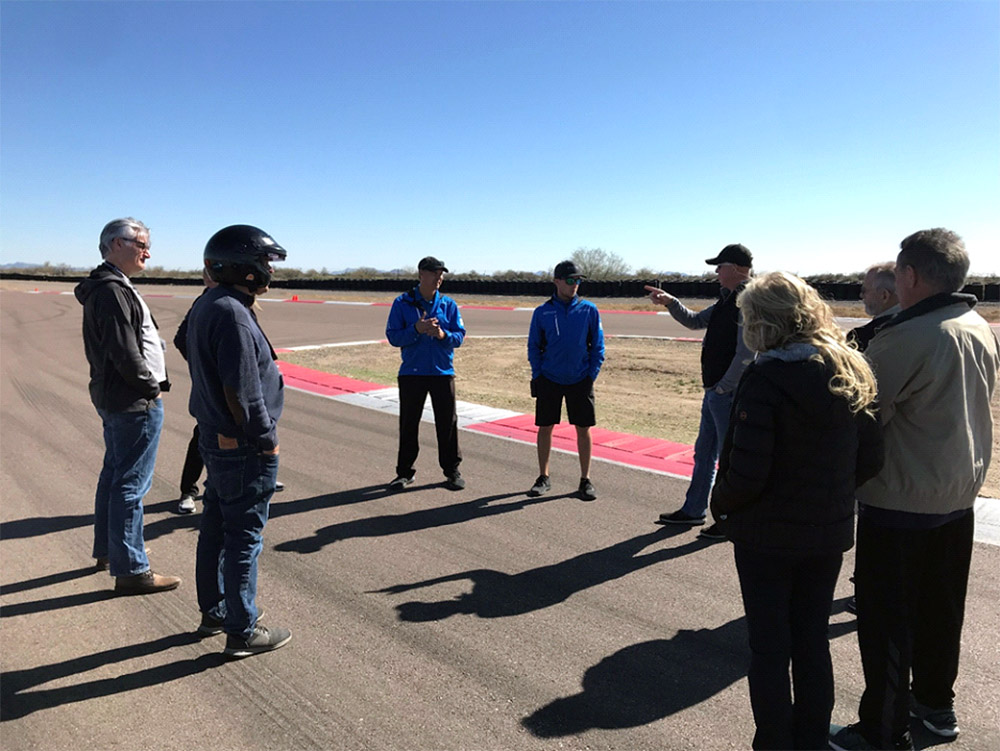 Once warmed up, the group moved to the slalom course. Driving in a straight line back and forth between stationary cones sounds easy, but steadying the car through abrupt changes of direction became a challenge as speeds increased. As with the accident avoidance exercise, students started at 25 mph and sought to maintain that speed through the course. They gradually increased their pace 5mph at a time to a top speed of 40mph. 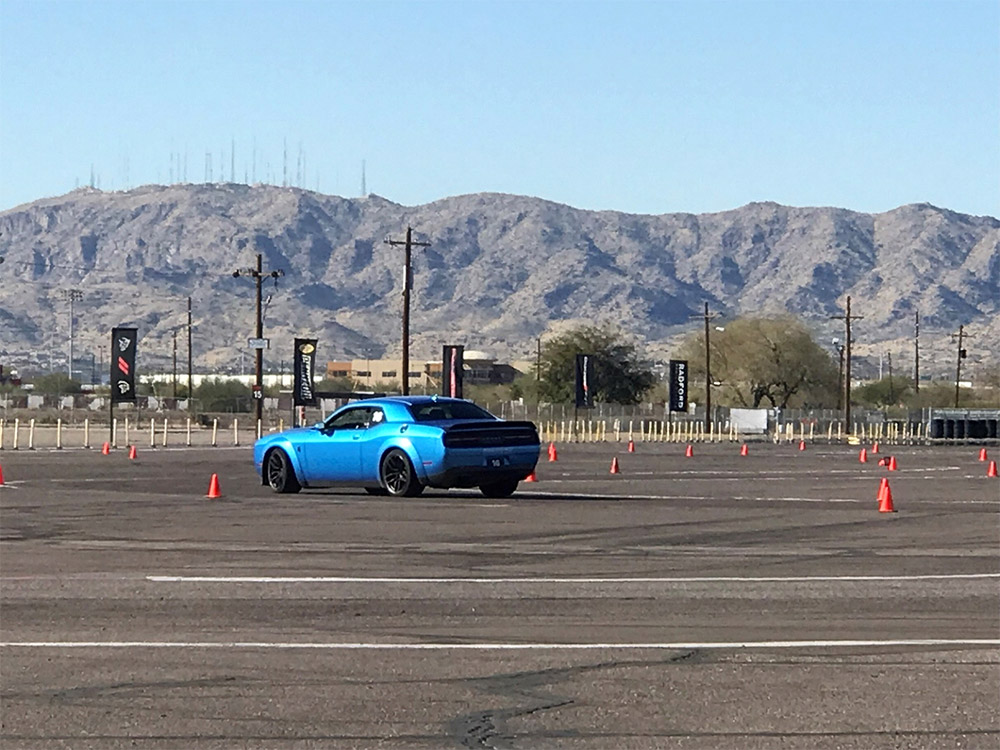 The key skill was to focus on the gaps between the cones rather than the cones themselves. The gaps allowed a brief opportunity to steady and balance the car before the next change of direction. Without that methodical approach, students found themselves flailing and reacting to oncoming cones rather than pro-actively managing their path through the cones. Getting the feel of the Hellcat’s weight transfer also set a foundation for exercises coming later in the day. 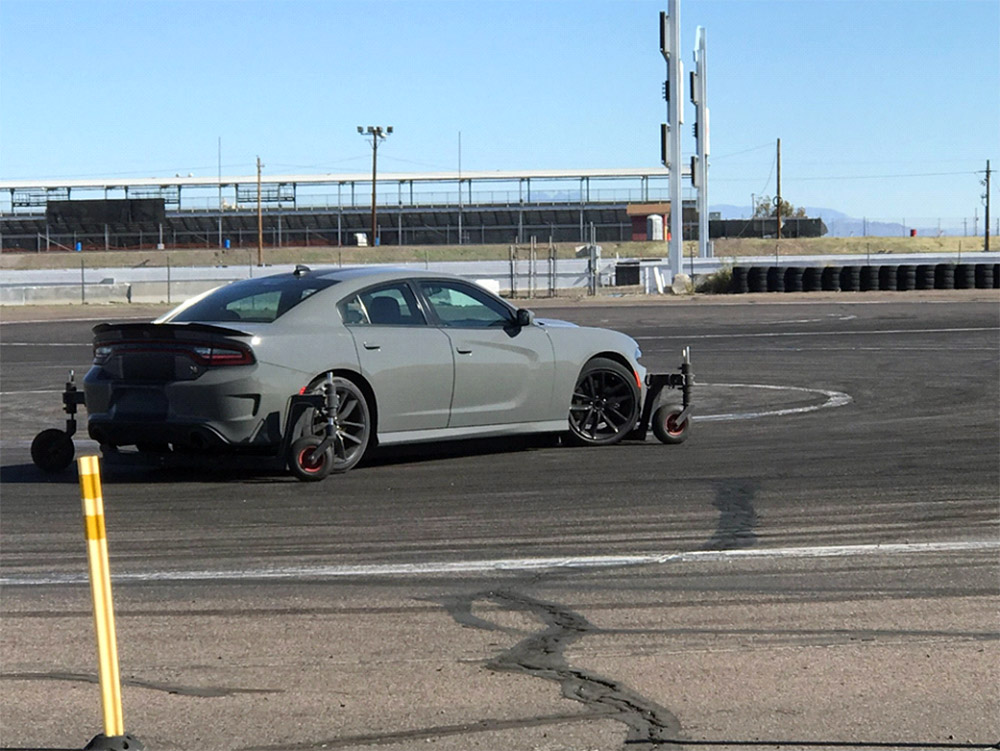 The major benefit of a driving school is the chance for students to simulate real world scenarios in the safety of the school environment. Better to sense a sliding car on wide open pavement than encountering it for the first time on the highway or an exit ramp. The skidpad is the ideal place for just that. An instructor operated a Hellcat with a specially designed frame to induce oversteer or understeer and then each student used the throttle, brakes and steering to respond.

Oversteer is when the rear of the car loses traction and the car spins. The driver likely will back the car into a wall or another car because the rear has swapped ends with the front. Understeer is when the front tires fail to bite and the car slides forward despite steering input. The driver will likely see the impact. In either case, the driver often has an opportunity to correct or at least mitigate the car’s behavior. While running around the skidpad was fun, it was also good accident avoidance training. 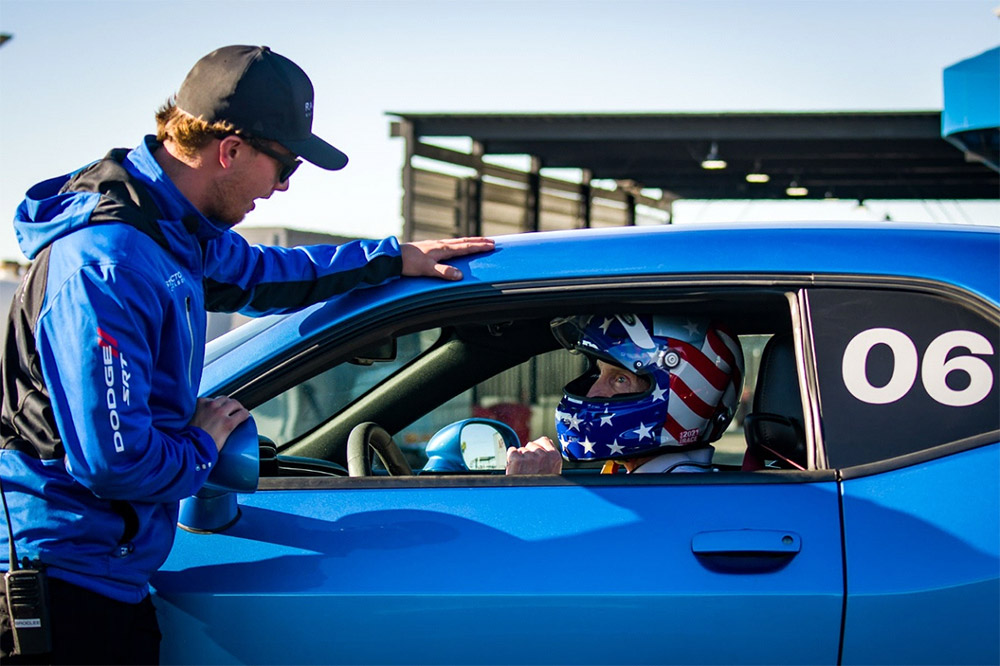 The group’s next destination was a short oval, to focus on building sight line skills, heavy braking, and throttle control through the turns at opposite ends of pavement. Cones set at each apex helped the students to orient their sight lines through the turns. The group ran counter clockwise and quickly learned the benefits of the ballet approach. Overdriving slowed down the car. A smooth rhythm developed of hitting the brakes, looking through the turn, and rolling into the throttle at the right time. Once pointed in a straight line, full throttle released all 500 horsepower and the Hellcat came to life. The impressive combination gave drivers a respect for the vehicle’s strengths. A few cool down laps for the overheated brakes was proof of how hard students were pushing. 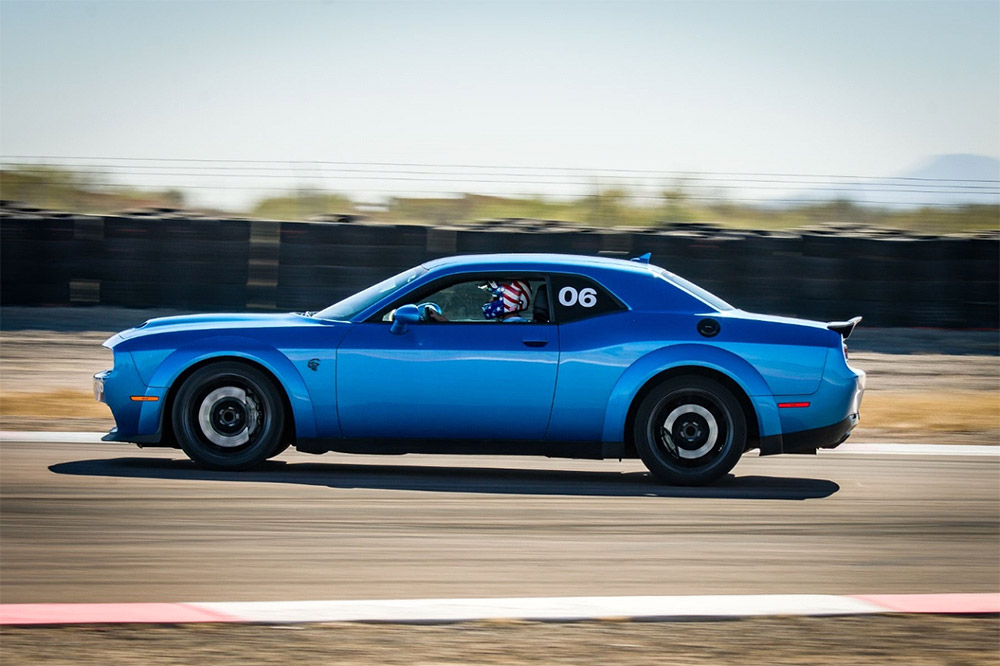 Armed with foundational skills and some familiarity driving the Hellcat, the autocross course beckoned with a stopwatch challenge. Instructors set a twisty and narrow path across the pavement bordered by orange cones. The tight course would reward finesse, while removing the crutch of high horsepower to make lap times. 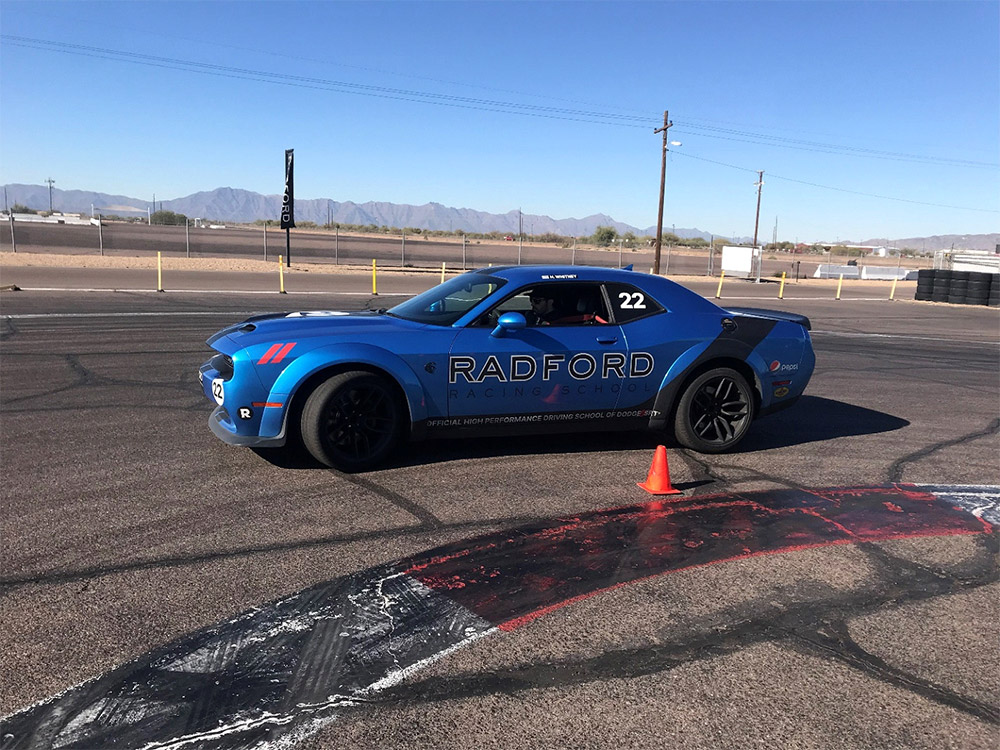 Instructors ran a demonstration lap and then each student had three timed runs. Students quickly learned that they could not force the cars through the tightest parts of the course. With lower speeds and no walls, drivers could also truly push the Hellcats to their limits. Managing momentum, particularly through judicious use of the brake pedal, was more important than outright horsepower. Muscle cars aren’t typically known for their agility in tight quarters, but the Hellcat was very impressive and a huge amount of fun to toss around. 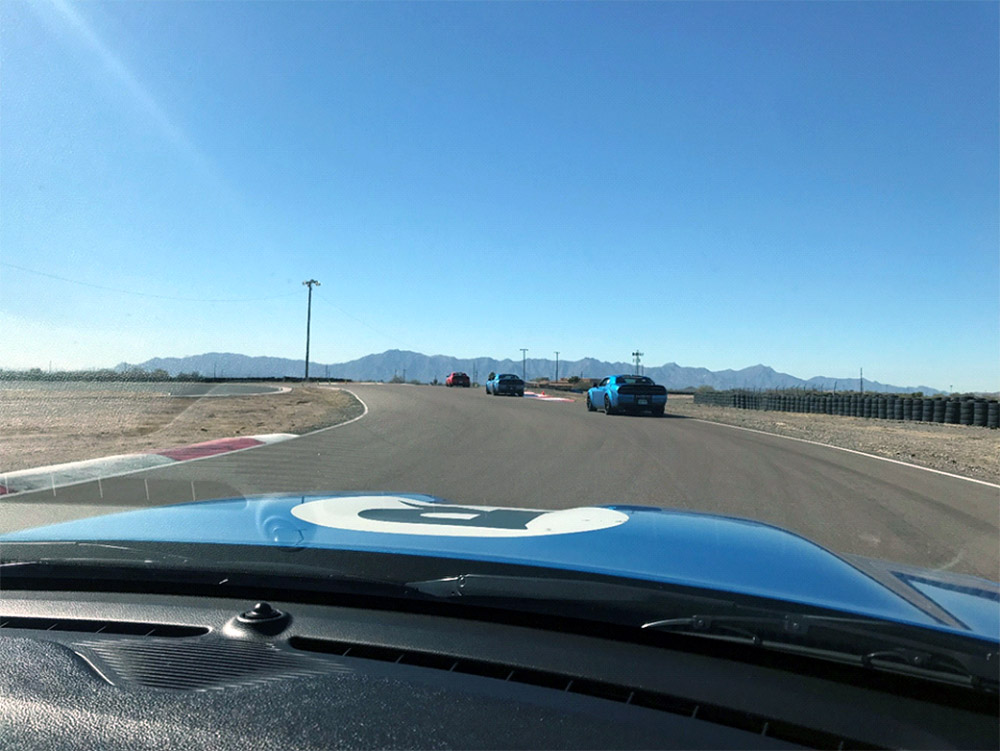 The grand finale of the day was the race track. The 15-turn, 1.6-mile ribbon of asphalt had enough space to let the Hellcats run and enough challenges for students to apply their lessons learned. The course traces its roots to the Bondurant School and its founder and namesake, legendary driver Bob Bondurant. Bondurant used his racing driver knowledge to design a course that mixed a taste of common race circuit features including a slower chicane, fast sweepers, and elevation changes. 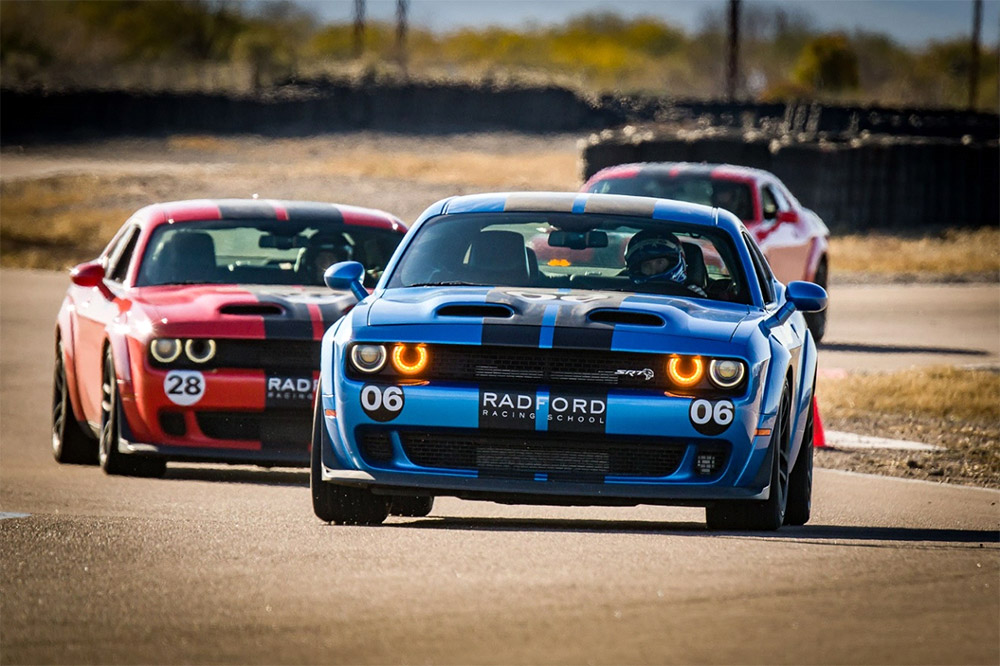 Instructors set out in a lead-follow arrangement. Students took turns at the front of the pack and as they demonstrated that they could handle more speed the instructors picked up the pace. The muscle cars shined on the road course and the Hellcats were able to make use of their prodigious power to claw their way forward. Putting together the techniques from earlier in the day, the road course time afforded students a thrill, and also a taste of what was possible. 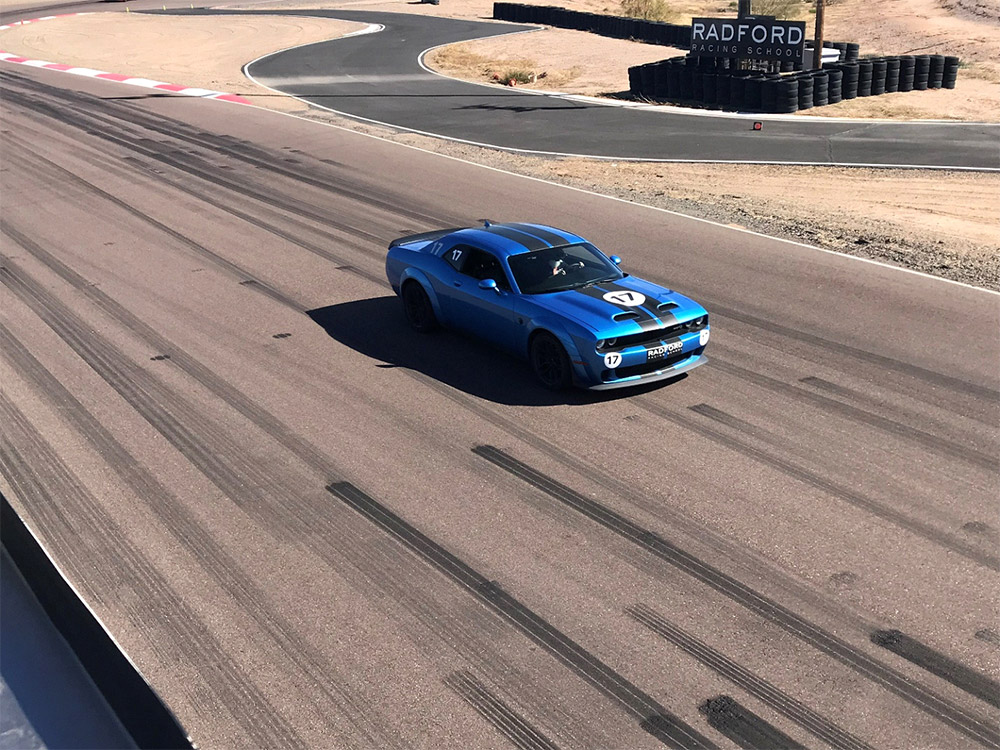 Laps complete, the group gathered for a last classroom session to look back on the day and share what they learned. While the Hellcats and their dynamic agility and power was memorable, the most common response was the importance of maintaining vision. The good news is that good vision is a transferrable skill regardless of the car. 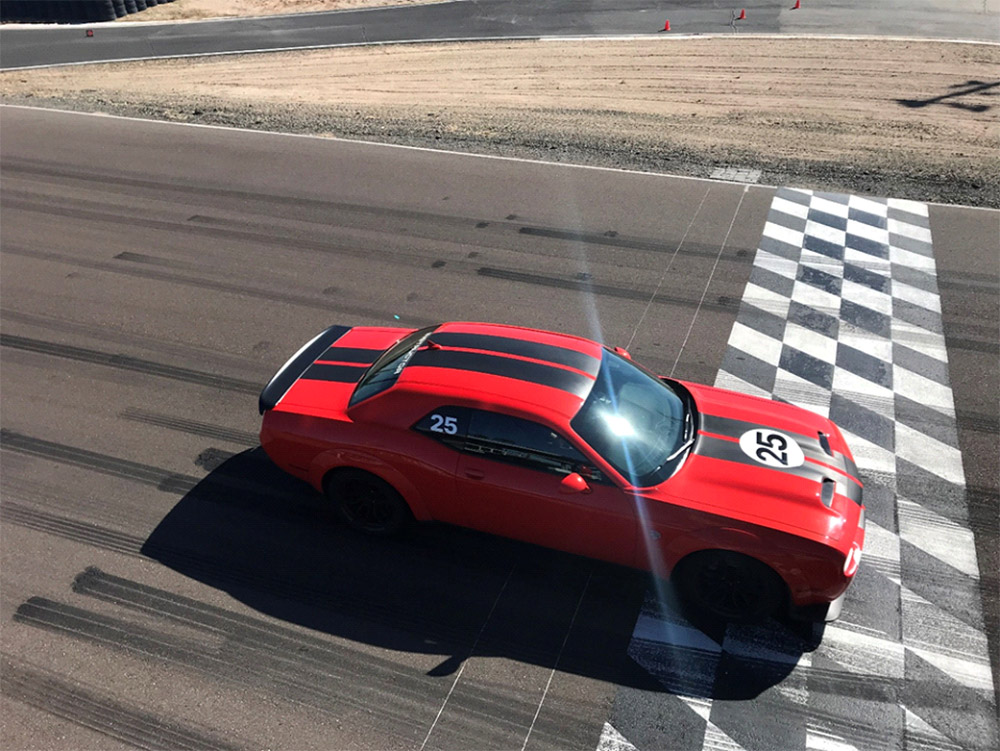 Instructors issued completion certificates and closed the curtain on another fun day in the Arizona desert. The Speed Journal would like to thank the Radford Racing School, Chief Instructor Danny Bullock and instructors Rob Knipe and Brock Nelson for their hospitality. In addition, The Speed Journal would like to recognize Dodge for its ongoing sponsorship and support of Radford for the Hellcat driving experience.