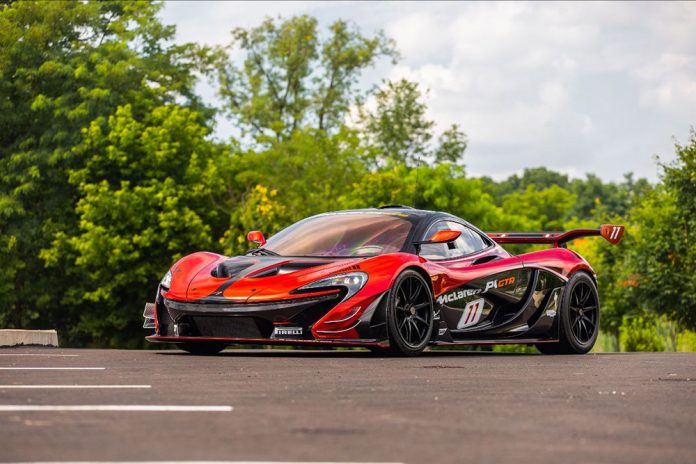 Mecum Auctions, the world’s largest collector car auction company, continues to add stellar consignments to its lineup for the Monterey 2021 Daytime Auction, to be held Aug. 12-14 on Del Monte Golf Course at the Hyatt Regency Monterey Hotel and Spa in Monterey, California. In total, an estimated 600 classic and collector vehicles are expected to cross the auction block along with approximately 100 vintage and antique motorcycles.

Current car consignments for the 2021 auction event include a shockingly wide range of top-shelf collector cars from modern and exotic supercars to historic race winners and more. Among the latest highlights to be added to the auction roster is a 2015 McLaren P1 GTR (Lot S118) that is No. 26 of just 35 produced and boasts only 120 miles on its clock. Contrasting the modern might of the McLaren are two prewar luxury cars: a 1929 Duesenberg Model J Murphy Convertible (Lot F49) that’s one of just 31 produced and an award-winning, CCCA Full Classic 1937 Cord 812 Supercharged Sportsman Convertible Coupe (Lot F83). The Cord is one of only 64 built and stuns with its iconic art deco design by Gordon Buehrig.

Auction offerings from the 1950s, ‘60s and ‘70s have also come to the table, such as the final 1959 Porsche 356A Convertible D (Lot S125) to be produced—a model believed by many to be the rarest “production” Porsche ever built for a full year with just 1,331 released. An unrestored, Bloomington Gold-certified 1969 Chevrolet Corvette L88 Coupe (Lot S121) that shows a shockingly low 20,500 miles and retains its original tank sticker will also cross the block in Monterey, as will two stunning vehicles from the Ferrari factory: a 1963 250 GT Lusso Berlinetta Scaglietti (Lot S110) and a 1973 Dino 246 GTS (Lot S119). The 250 GT shows Serial No. 4513GT and was the 57th of 350 built by Carrozzeria Scaglietti and designed by Pininfarina. It includes a Marcel Massini Report, a Ferrari Classiche Certification Red Book and was previously part of the Matsuda Collection in Japan. The Dino is Serial No. 05848 and displays a mere 21,085 miles; it’s equipped with a gated 5-speed manual gearbox mated to a 2418cc 6-cylinder engine and includes independent front and rear suspension, 4-wheel disc brakes, power windows, Borletti air conditioning and more.

In addition to the cars and motorcycles, Mecum Monterey 2021 will also present a selection of Road Art, including the Elio Re Ferrari Toy Model Collection. Featuring more than 300 different Ferrari toy models, the expansive collection is a truly remarkable assemblage that is likely one of the most comprehensive of its kind in the world. The collection will be on display for viewing and inspection at the live auction event in Monterey, though all bidding on items within will take place via Mecum’s timed, online auction platform at OnTime.Mecum.com; bids on the Elio Re Ferrari Toy Model Collection are being accepted now through Aug. 13.

Bidder registration for Mecum Monterey 2021 is available online in advance and on-site for $200 and includes admission for two to each auction day. Internet and telephone bidding services will also be available for those unable to attend in person. Doors open each day at 8 a.m. with the vehicle auction beginning on Thursday, Aug. 12 at 10 a.m. and on Friday, Aug. 13 and Saturday, Aug. 14 at 9 a.m. Portions of the auction will be broadcast on NBC Sports Network and on Peacock.