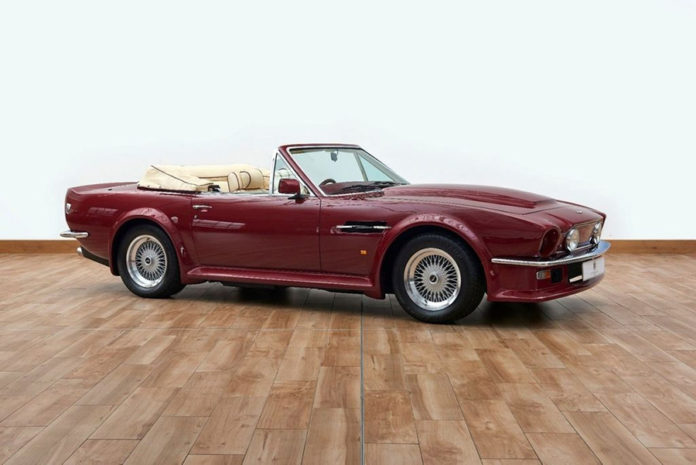 David Beckham is rumoured to own a vintage luxury car collection valued at $3,000,000, but this may have reduced slightly as one of them is now up for grabs on Auto Trader.

Golden Balls’ own Aston Martin AMV8 Volante is currently being advertised on Auto Trader, the UK’s largest digital marketplace for new and used cars, for a cool £445,000, via Aston Martin Works.

This beautiful vintage car comes in deep red, with cream leather interiors, deep pile carpets and burr walnut, as well as the sought-after X Pack engine. With a five-speed manual gearbox and 432hp, the V8 can do 0-60mph in 5.2 seconds, and a top speed of 168mph.

Previously registered under Beckham’s personal plate ‘DB1001’, the V8 Volante was often spotted by paparazzi in the UK. Immediately recognisable by its gleaming metallic paint, the V8 would be seen regularly cruising along West London’s streets.

The Beckhams held on to the Volante for 15 years before selling it in 2018. David even shipped it over to Madrid during his time with Real Madrid football club, showing a clear fondness for this particular model.

The Aston Martin AMV8 Volante is in pristine condition and was even showcased at the London Classic Car Show in February before lockdown. One of just 78 similar cars, it has been meticulously maintained by its previous owners and is ready for immediate sale.

Auto Trader’s Rory Reid says, “We know David Beckham is a bit of a petrolhead, owning cars ranging from Bentleys and Rolls-Royces to, of course, Aston Martins. This AMV8 Volante is a gorgeous classic so I’m not surprised he held on to it for so long. It’s cool to know someone in the public can now buy this car – well as long as you’ve got half a million spare of course – just by heading onto Auto Trader.”