One of the world’s most exclusive motoring events, Passione Engadina in St. Moritz, this year celebrated the achievements of Bugatti 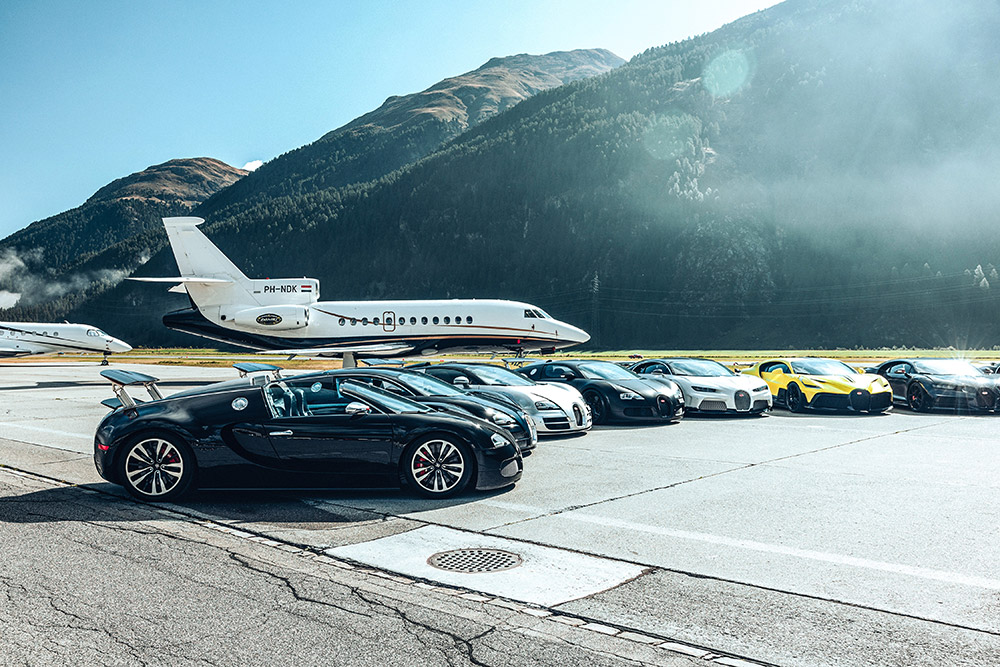 Passione Engadina, now in its eleventh year, is a gathering of rare classic cars built up until 1992. In recognizing Bugatti as its featured marque, the Passione Engadina looked to Ettore Bugatti’s roots, born in Milan to a family of artists. He would later undertake a number of apprenticeships before establishing a company in his own name in France. His artistic upbringing and natural talent for engineering would lead Ettore to build some of the most beautiful and innovative cars of all time, and his vision continues to inspire Bugatti to this day. As he once said: “If comparable, it is no longer Bugatti.”

The story of Ettore’s journey, and the evolution of the Bugatti brand, was told through a special exhibition located just outside the famous Kulm Hotel in St. Moritz. The ‘Pavillon Bugatti’ displayed 13 cars, from the Type 1 Prinetti Stucchi – a motorized tricycle recognized as the first Ettore Bugatti-engineered project – to the track-only Bolide1 hyper sports car, scheduled for delivery to customers in 2024.

Generously donated by Bugatti customers, and on display until the 28th August, the Pavillon Bugatti was open to the public, attracting nearly 20,000 visitors. The full line-up of cars was:

Considered the first project engineered by Ettore Bugatti, created while he was just 17. He developed the Type 1 tricycle during his time employed at Prinetti Stucchi. The tricycle is equipped with two De Dion Mono-Cylinder engines on a Rochet-Schneider chassis.

The first revolutionary project from Ettore, and the first car wearing the Bugatti brand. Its four-cylinder engine had an eight-valve design, helping create a powerful, lightweight car that would go on to beat much bigger and more powerful motorsport competitors.

The Type 35 is renowned as one of the most successful racing cars of all time, with a record of over 2000 victories in its career. The vehicle in the exhibition is a Type 35 B raced by Louis Chiron, a driver that also gave his name to the Bugatti model launched in 2016.

The Type 57 SC Atalante is considered one of the most valuable and iconic Bugattis ever created, pairing a beautiful design with a hugely powerful supercharged engine and sporty, low-slung chassis. Few cars produced before or since can match its combination of luxury, performance and elegance.

The Type 55 was built from motorsport technology, but with a roadgoing personality. The engine and the chassis are evolved from the Type 51 Grand Prix, which was specifically developed to race, including at Le Mans. The vehicle in this exhibition is the only remaining Type 55 with a body by Figoni.

The Type 59 was part of Ettore Bugatti’s never-ending quest for more performance, with a number of significant race finishes to its name. This Type 59 Sports remains the only Grand Prix car to be converted into a sports car at the factory and exists today in virtually unrestored original condition as a perfect witness to the period in which it thrived.

With the rebirth of the Bugatti brand in 1991, a new model was launched to celebrate the 110th birthday of Ettore Bugatti: the EB110. It completely revolutionized the world of the supercar, with all-new levels of performance. The vehicle displayed in St. Moritz is the last EB110 that was officially delivered before the end of its production run, an EB110 Super Sport, in yellow.

To mark a sensational record-breaking run that exceeded the magical threshold of 300mph (482.80 km/h) for the first time in a roadgoing car, Bugatti proudly presented the limited-edition Chiron Super Sport 300+. Only 30 units were produced, each visually and technically inspired by the record-breaking vehicle.

La Voiture Noire is a piece of automotive haute couture inspired by one of the most mysterious Bugattis of all time. Only four Bugatti Type 57 Atlantic models were ever built, revered as the most iconic and beautiful of all time. But the fourth, all-black Atlantic has been missing since WWII – La Voiture Noire. This modern incarnation brings the speed, technology, luxury and aesthetics of an icon into a new era.

The Bolide is the ultimate development in the quest for the purest driving experience of Bugatti’s revolutionary W16 engine. Freed from the shackles of roadgoing comforts and luxuries, the track-only Bolide is lightweight and developed for maximum downforce.

On Saturday 27th August, more than 130 classic Italian cars and Bugatti icons lined up at the Signalbahn parking in St. Moritz, ready for the start of Passione Engadina’s Julius Baer Rally, with a route twisting and turning through Switzerland and Italy, along mountain roads of extraordinary beauty and through the alpine passes of Bernina, Umbrail and Fuorn.

Among the line-up was a number of early Bugatti Grand Prix cars, including Type 35, Type 51 and Type 59. Once the dominant force on motor racing circuits throughout the world, these marvels of engineering are now enjoyed by their owners on the road, providing a pure distillation of Ettore Bugatti’s engineering genius.

One collector also brought a particularly special example of the Bugatti EB110 Super Sport; the car that held the ice driving speed record from 1995 until 2013. Even with standard road tires, the four-wheel-drive Super Sport was able to set an FIA-approved speed of 296.3km/h on a frozen lake in Finland.

Early on the morning of Sunday 28th August, Bugatti Pilote Officiel Andy Wallace headed to the nearby Samedan Airport, a spectacular runway located 1,707 m (5,602 ft) above sea level, for a dynamic presentation of the Chiron Super Sport5, supported by three customer cars. It was the perfect location to unleash the full force of Chiron Super Sport’s 1,600 PS W16 8.0-liter quad-turbocharged engine.

Passione Engadina competitors then arrived at the airport for the first in a series of time trials, challenging the precision and time-keeping of the drivers. A second set of time trials then took place for the first time in St. Moritz city center, located in Dal Bagn, before the cars enthralled the public with an exhibition at the Kulm Country Club, with awards presented by a panel of expert judges.

Further information on Passione Engadina can be found at www.passione-engadina.ch/