Next Generation BMW 3 Series Sedan Tests at the Green Hell 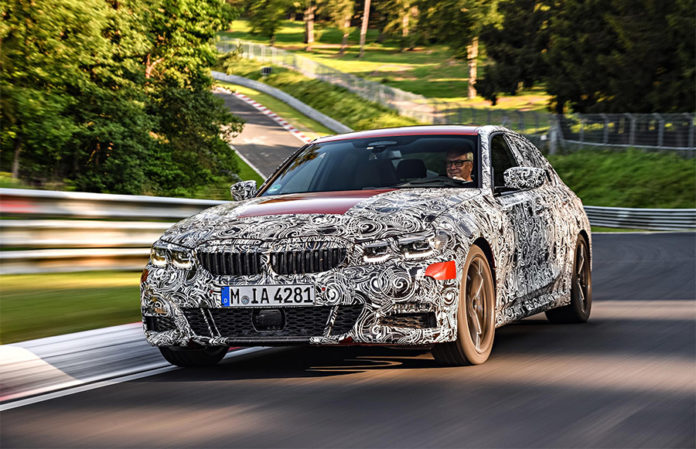 The next generation of the BMW 3 Series Sedan just completed the crucial final stages of suspension and chassis development prior to the start of production. There was only one possible location for full driving dynamics testing and set-up runs: the legendary Nürburgring Nordschleife. For over 35 years, test runs at the Green Hell have traditionally served as an important validation step for drivetrain and suspension technology of newly developed BMW models. A particularly extensive testing program was developed for the camouflaged prototypes of the new BMW 3 Sedan. The comprehensive development program for the new suspension, steering and braking systems provided the engineers with a broad range of opportunities to optimize ride comfort and dynamic performance, enabling the ultimate sports sedan for the mid-range premium segment to mature lap by lap. 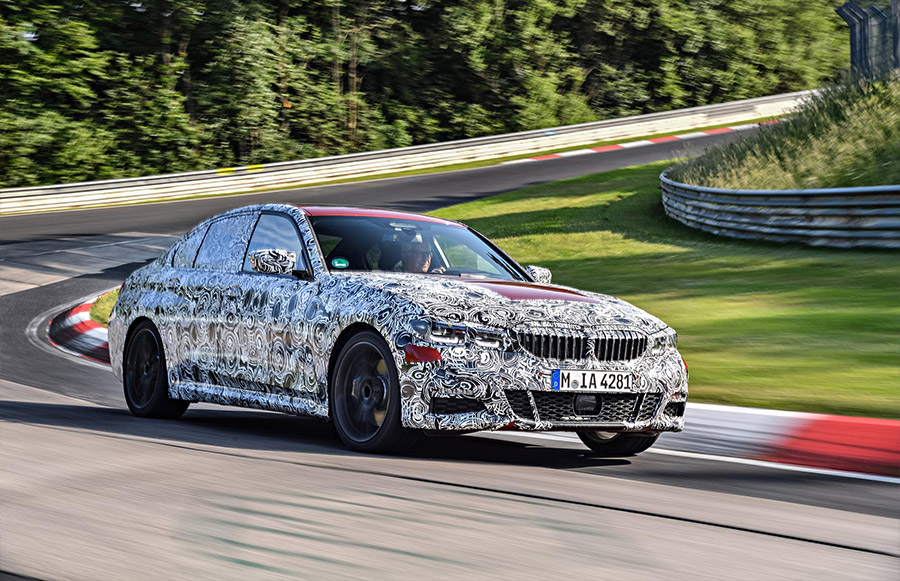 The development process for the new BMW 3 Series Sedan is definitely geared towards enhancing the “sports sedan” character of the car. The center of gravity is 0.4 inches / 10 millimeters lower than in the predecessor model, weight distribution is balanced at a perfect 50:50 and the total weight is as much as 121 pounds / 55 kilograms less. Meanwhile the rigidity levels of the body and suspension hard points – so crucial to the steering set-up and ride acoustics – are significantly enhanced. The car’s agility and steering precision benefit from the extended front and rear track widths, while increased wheel camber levels offer additional potential for maximum transverse dynamics.

In terms of the engine portfolio, one important feature is a thoroughly revised 4-cylinder gasoline engine. It is the most powerful 4-cylinder engine ever to be fitted in a BMW series production model. Yet its fuel consumption figures are still some 5 per cent below those of the predecessor engine: one contributing factor being the further developed 8-speed Steptronic transmission. 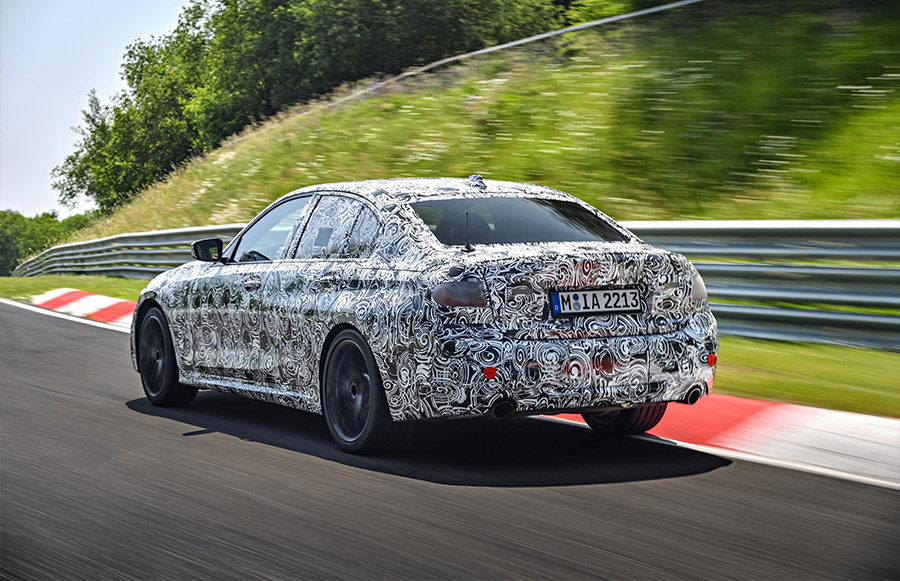 Not only is the body lighter and more rigid than that of the predecessor model, the same is also true of the front and rear axles in the new BMW 3 Series Sedan. The result is improved comfort while retaining a sporty driving experience. The key feature in terms of suspension development in the new BMW 3 Series Sedan is its innovative damping system. The first ever progressive dampers to be fitted in a BMW model function continuously and progressively in relation to suspension travel. As such, the harshness that occurs when compensating for bumps on the road and during hard cornering can be neutralized gently and precisely – the perfect basis for striking a unique balance between sport and ride comfort without resorting to an electronic damper system. 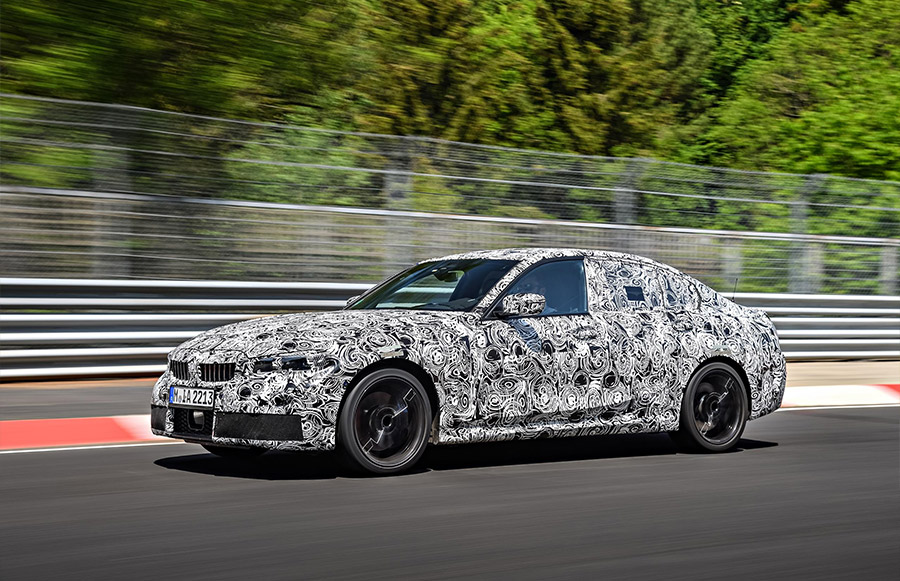 Long known for its diversity, the track layout of the Nürburgring Nordschleife quickly became the perfect setting for refining the new damper technology and other suspension components. “We’re using the progressive dampers as an active set-up element so as to create supreme driving properties in all conditions,” explains Peter Langen, Head of Driving Dynamics. “With short spring travel, a sensitive damping response ensures comfortable vibration compensation. When the car passes over large bumps, the body movements are controlled by increased damping forces.”

The progressive dampers are a standard feature of the suspension technology in the new BMW 3 Series Sedan. In a specific set-up they form part of the M Sport suspension, which includes a lowering of 0.4 inches / 10 millimeters, 18- inch light alloy wheels and mixed size performance tires. This provides enhanced driving dynamics – something that can be experienced more intensely than ever before. The increased damping forces can be felt on the Nordschleife in particular: in the M Sports suspension the damping is 20 per cent higher than in the standard suspension. “This means the difference from the standard suspension is much more perceptible than before,” says Peter Langen. “We’ve also made the M Sport suspension much sportier, with more rigid bushings and stabilizer bars and higher rate springs.” 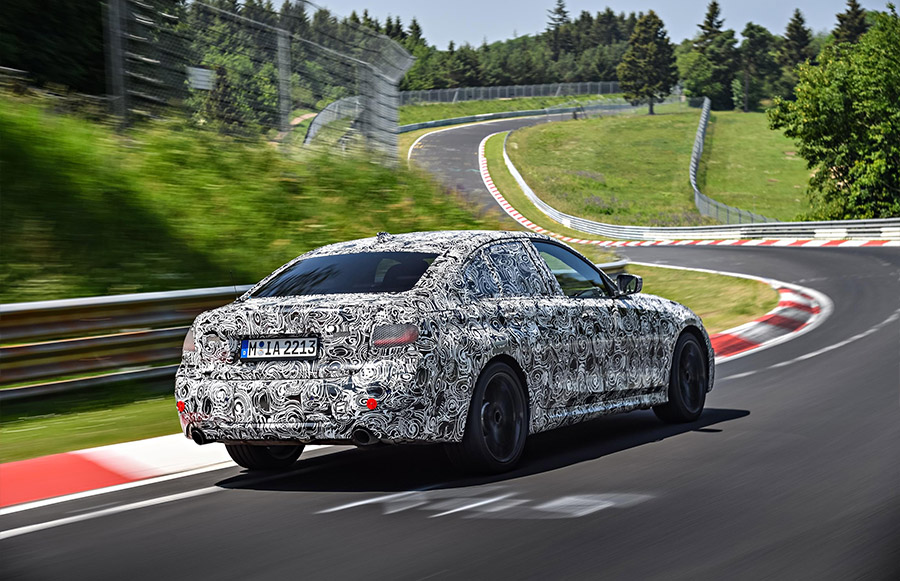 In order to further reinforce the car’s sporting characteristics, the new M Sport suspension is offered solely in combination with the Variable Sports Steering. In addition to speed-related steering assistance, an additional benefit is variable steering ratio. Variable Sports Steering has been specially tuned for the new BMW 3 Series Sedan. It responds with much greater precision to slight steering movements, without seeming nervous in the center position. The harmonious set-up of the steering system can be felt on long bends as well as when changing direction several times in rapid succession. A linear build-up of steering forces and optimized feedback increase precision when cornering in dynamic style.

The M Sport differential is able to demonstrate its benefit on both the Nordschleife and the Grand Prix circuit. The electronically controlled locking function in the rear differential of the new BMW 3 Series Sedan is linked to Dynamic Stability Control DSC, ensuring the best possible rotational speed compensation between the rear wheels on the inside and on the outside of the bend. Depending on the situation on the road, it is possible to pre-emptively influence both understeering and oversteering without brake intervention. 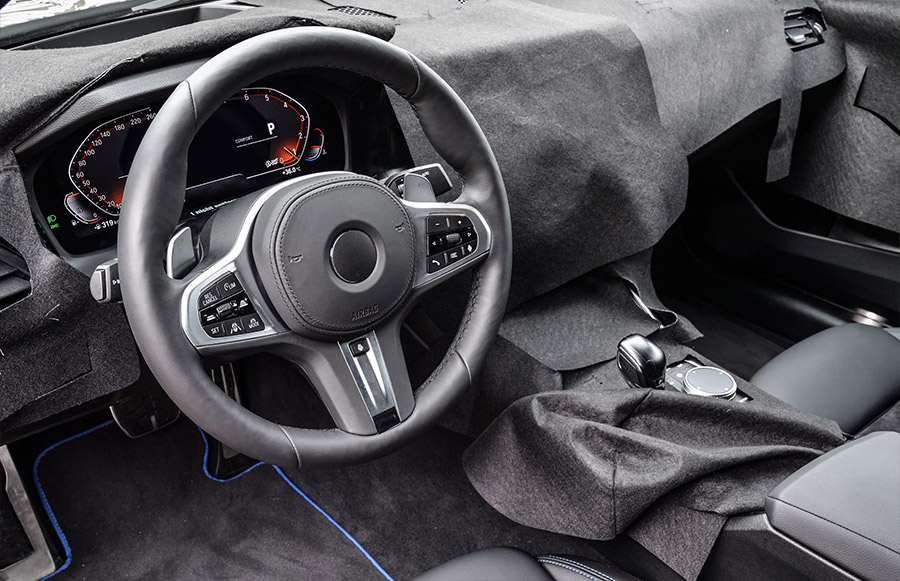 The active differential lock distributes drive torque selectively between the rear wheels. In this way, it prevents slip on a wheel with reduced surface grip while ensuring that the engine power can be used to provide for the best acceleration out of corners. “Unlike conventional mechanical locks, the regulated M Sport differential can optimize so much more than just traction,” says Peter Langen. “In addition to cornering dynamics, there is a particularly tangible increase in drive stability in the event of load changes, for example. This allows the new BMW 3 Series Sedan to be driven confidently and effortlessly even when travelling in dynamic style.” For sporty driving, the active differential lock provides much higher levels of transverse grip as well as a perceptible boost in dynamic performance when accelerating out of bends. It also supports optimized stability, precision and cornering predictability in the new BMW 3 Series Sedan – all without brake intervention.

Onboard Lap – Porsche Taycan Sets Record at the Nürburgring-Nordschleife

Onboard Record Lap of the Lynk & Co 03 Cyan at the Nürburgring Nordschleife...