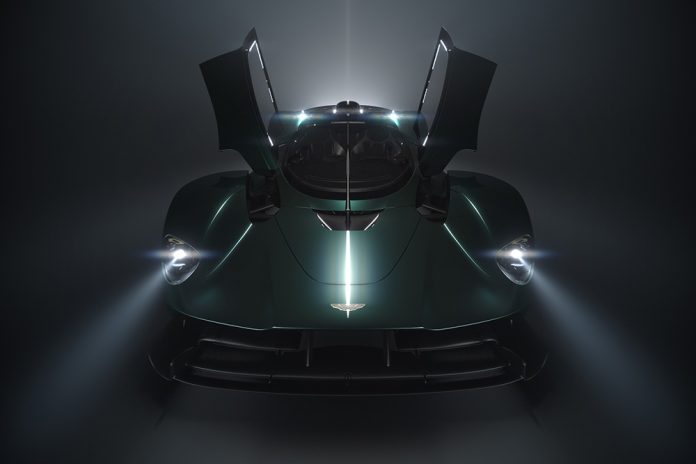 70 years on from the brand first entering the American market, Aston Martin will return to the prestigious Monterey Car Week in 2021 with its largest ever presence on the peninsula as Aston Martin Club 1913.

Positioned at a custom-built 11,300 sq. ft. (1,050 sq. m.) luxury Club House in a prime location overlooking the hallowed 18th fairway of the Pebble Beach Golf Links above Stillwater Cove, Aston Martin’s 2021 space honors both the past and present, while simultaneously looking forward with the introduction of two new products that point to the brand’s performance car future.

Highlighting the weekend, Aston Martin Club 1913 will host the North American debut of the new Aston Martin Valhalla – following its reveal at the British Grand Prix at Silverstone – as well as a global reveal of an exciting new product which extends the brand’s performance credentials a step further.

In addition to the two debuts, Aston Martin’s activation on the peninsula this year will also include a selection of the brand’s specials, core sportscars, GTs and SUV, recognizing the British ultra-luxury brand’s past, present and future.

Guests visiting Aston Martin Club 1913 will enjoy a display which celebrates the brand’s return to top-level Grand Prix racing after more than 60 years, using technology derived from Formula One® racing endeavors to inform the brand’s new mid-engine road car strategy. Sharing the luxury space, Aston Martin will also honor its relationship with the James Bond film franchise spanning more than 50 years. In addition, vehicles which embody the leading-edge capabilities of the marques bespoke service, Q by Aston Martin – cars like the visceral V12 Speedster – will be on display for guests to see first-hand for the first time in America.

70 Years of Aston Martin the Americas

2021 is an auspicious year for Aston Martin in the Americas; it’s the 70th anniversary of the brand selling its first car in North America. 70 years of manufacturer sales in the United States and, later, Canada, is a major milestone and, over the course of those seven decades, the business has seen itself taken to the hearts of luxury sports car enthusiasts across the continent.

Indeed, around one in four of all Aston Martin cars built to date have found their first owners in North America, making the region hugely important to the commercial performance of the brand.

Shortly after entering production in 1950 with its then-new DB2 saloon, Aston Martin elected to expand its foothold and begin sales in the Americas as a way capitalizing on the region’s new-found taste for European sportscars in the immediate post-war years. As part of a fledgling public relations push to raise awareness for the brand in the states, a 1951 DB2/4 was shipped to the U.S. for testing with key automotive enthusiast publications.

Road & Track magazine was among the first publications to get its hands on the car and wasted no time in properly evaluating it with none other than soon-to-be world champion Grand Prix driver Phil Hill at the wheel. Testing and evaluation by U.S. publications was a success; Road & Track proclaimed it to be “…one of the best handling and fastest cars ever tested….” In fact, after concluding the evaluation Hill walked away from the test so impressed, he decided to purchase the test vehicle itself; becoming one of the first buyers of the DB2 in North America, taking delivery on 15 September 1951.

The success of the DB2 in North America cannot be overstated. Of the 411 cars built, around a third made their way direct from the Aston Martin factory to owners in the United States. 70 years on from its humble beginnings in 1951 there have been ebbs and flows for the business. Today however, one thing remains the same; Aston Martin the Americas still accounts for roughly 30% Aston Martins sold worldwide annually, making it the brand’s largest market by volume. Unit sales in the Americas more than trebled to over 1,000 vehicles in H1 2021 representing 36% of global sales with an increased mix vs prior year with strong performance from DBX.

In 2021, Aston Martin the Americas counts 35 dedicated dealers across the United States, with a further five dealers in Canada, as well as individual locations in Mexico, Chile, Peru and most recently, Brazil.

Reflecting on the 70-year association between Aston Martin and North America the marque’s Chief Executive Officer, Tobias Moers, said: “For seven decades now, enthusiast drivers in the United States and Canada have had the chance to enjoy some of the greatest cars we have yet made. Around a quarter of all the cars we have ever made have been sold in North America; American and Canadian investment, management and support have played a major part in the company’s history. I am very happy to see us celebrate not only this important anniversary, but also the enduring link between our brand and the knowledgeable and hugely enthusiastic brand of owners who enjoy our cars in North America today.”