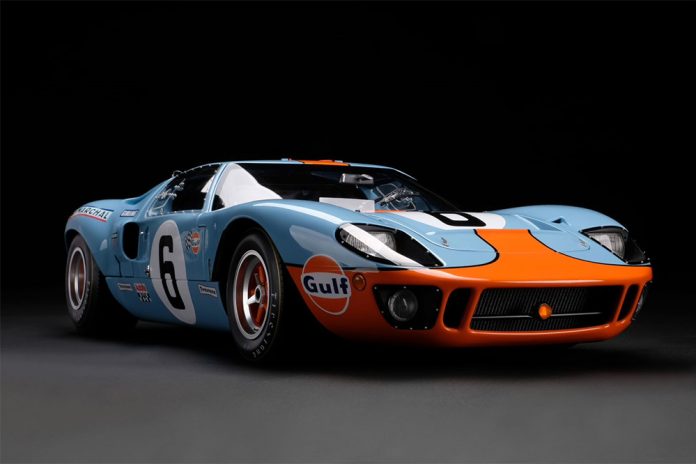 Developed with the cooperation of the Ford Archive and Heritage department and Gulf Oil International, Amalgam are now accepting orders for their much-awaited GT40 model.

Following submission to Ford the completed sample has been approved and the first batch of models is in build. Due to the astounding popularity of the model, Amalgam are now accepting orders on the models, requiring clients to place a 100% deposit to secure their model. “We have had an incredible amount of interest in this project and the models in the first two batches are already allocated to customers” explains Copeman. “As a result, we are encouraging our most loyal customers to order their model now to guarantee an earlier delivery. To reward these early purchasers, the first 50 models will actually be accompanied by a Giclée art print of a Rainer Schlegelmilch photograph taken in the early stages of the race.” This Giclée print will be on archival art paper, with an image size of approximately 30x45cm (12x18in).

The model is a perfect replica of chassis #1075, which was victorious at the 24 Hours of Le Mans in 1969. #1075 was a special chassis, having also won Le Mans the previous year in the hands of Pedro Rodriguez and Lucien Bianchi. In 1969 though, the #6 car piloted by Ickx and Oliver recorded the closest-run competitive finish in the history of the Le Mans 24 Hours, and one of the greatest in the history of motor racing, beating Hans Hermann’s Porsche 908 by just 120 metres (390 feet) after 372 laps.

Porsche had already wrapped up the World Sportscar Championship with three of the ten races to go and were strong favourites to win Le Mans for the first time. 16 Porsches competed, more than a third of the field, and Porsche did indeed lead for 90% of the race. However, the leading 917’s gearbox broke at 11.00 am on the morning of the second day of the race, and the Ford of Ickx and Oliver took over the lead. The race ended in a 3-hour sprint, with the Ford battling exhaust problems whilst being pursued by the Porsche 908 of Herrmann and Gérard Larrousse, who themselves contended with mechanical issues affecting the brakes and engine. Ickx knew if he led onto the Mulsanne straight, Herrmann would pass, but he could slipstream past him back again and then hold a lead for the rest of a lap. The cars crossed the finish line with less than a minute to go and so needed to complete one more lap. The Ford had only ever done 23 laps on a tank of fuel, but now suddenly needed to gain an extra lap. Ickx faked a lack of power from fuel starvation, letting Herrmann pass him early on the Mulsanne Straight, before using the slipstream to pass him again just before the end of the 5km straight. Ickx held off Herrmann to cross the line first, denying Porsche for another year.

“Chassis 1075 is one of the most important cars in Ford’s history, a stunningly beautiful design with an iconic livery. It’s an incredibly exciting project for us” says Copeman. “We’re expecting to follow the release of the 1:8 scale with the addition of an 1:18 scale model before the year is out.

The Amalgam Collection Ford GT40 at 1:8 scale can be ordered on www.amalgamcollection.com.