An Aluminum-Bodied Aston Martin Zagato?…Yes, and Now is Your Chance to Buy It 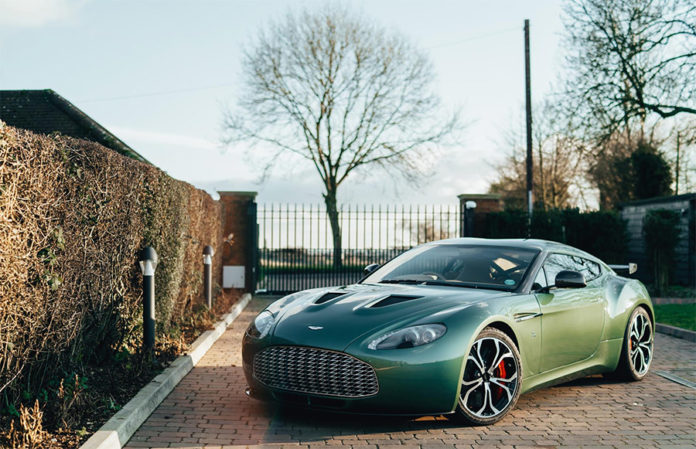 Originally unveiled at the 2011 Concorso d’Eleganza Villa d’Este to celebrate the 50th anniversary of the DB4GT Zagato, the V12 Zagato went on to win the ‘Design Award for Concept Cars and Prototypes’ before going into a limited production run of just 64 cars.

All V12 Zagatos are special, but the model at Bell Sport & Classic is unique. Not only is it one-of-two pre-production versions, built to tour the world as show cars for prospective clients at exclusive events, but while all other cars in the limited run feature a hand-crafted aluminium and carbon skin, this car’s body is made solely from the lightweight metal.

Owned by Aston Martin itself up until 2016, this right-hand-drive example was due to go to Zagato to form part of the design house’s own collection. However, a very special Aston Martin client – and the car’s only owner – persuaded the company to let him purchase it, and before it was delivered to him, underwent a full recommissioning.

Originally painted Titanium Grey, it was refinished in Aston Martin Racing Green and the interior retrimmed, while Aston Martin engineers are also rumoured to have fettled the 5.9-litre V12 engine to give it a little more power than the standard car’s 510bhp. Under the bonnet, it also features the original plaque denoting its pre-production model status.

Featuring design elements seen on previous cars from the Milanese carrozzeria such as the ‘double-bubble’ roof and short body overhangs, inside the hand-trimmed leather features the quilted Zagato motif, which is carried across the door cards and seats accompanied by a matching leather bag set. It also comes with a book detailing its recommission, further adding to its appeal.

Tim Kearns, Managing Director, Bell Sport and Classic said: “We are very pleased to offer for sale this truly unique Aston Martin V12 Zagato. All of the cars in the limited run of 64 are, of course, very special indeed but this outstanding example is one of only two pre-production cars and the only fully aluminium-bodied model ever made. It has been treated to a meticulous recommissioning by Aston Martin itself and would be a wonderful addition to any collection.”