Since 2015, Berg has made Laguna Seca Raceway home for his driving school 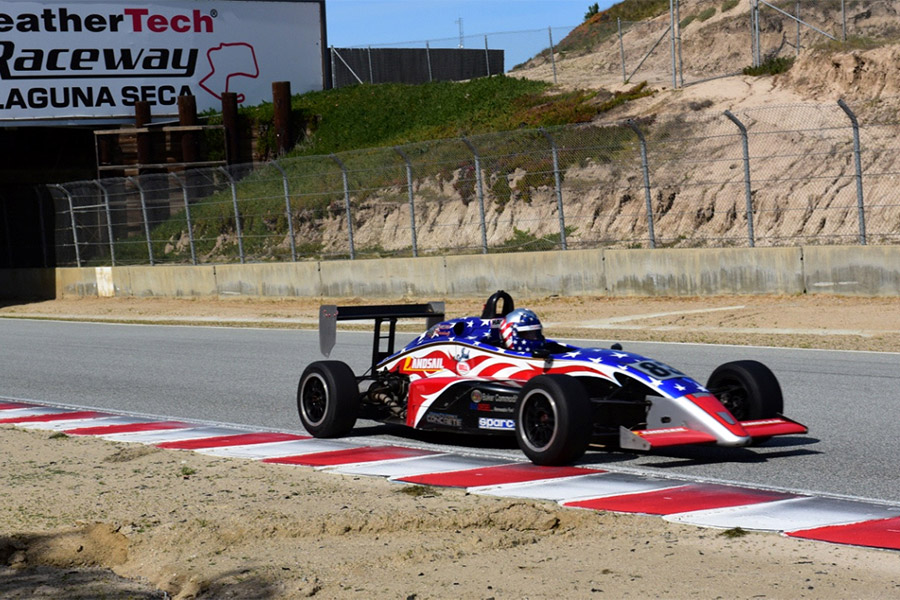 Known for its sweeping vistas and dramatic elevation changes, countless drivers have logged laps around the 2.2-mile, 11 turn natural terrain road course known as Laguna Seca Raceway. While the scenery is compelling, getting much closer to the ground is necessary to truly understand this track.

Allen Berg Racing Schools has just the program and equipment to get the job done. Since 2015, Berg has made Laguna Seca Raceway home for his driving school, offering a variety of experiences utilizing only single-seat open-wheel race cars. Why formula cars? Sitting inches from the pavement with clear sightlines, they track every bump and track surface change. Likewise, they’re fast, nimble, focused, wired with telemetry, and give the most uncompromised connection between the driver and the track. 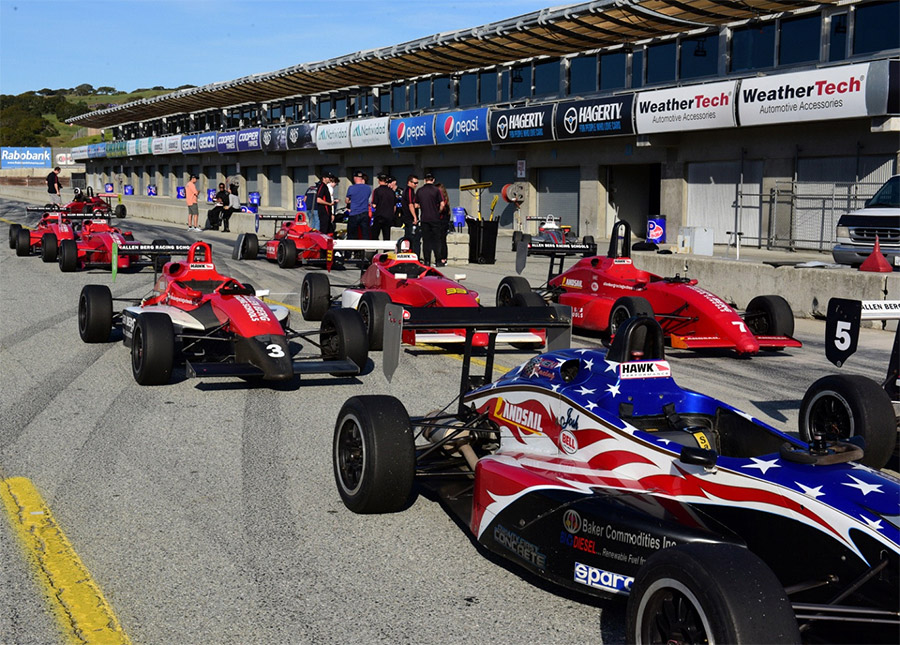 Having driven many miles around Laguna Seca Raceway in several different cars, resident Speed Journal driver Jeff Francis was eager to try out a formula car at the legendary track, and attended the two-day version of the school. The remaining dozen or so students split between those attending the one day school and those sticking around for two day school. The students, including a race car engineer, a college student and go-kart racer, and an engineer working on the development of autonomous cars, all arrived brimming with enthusiasm. 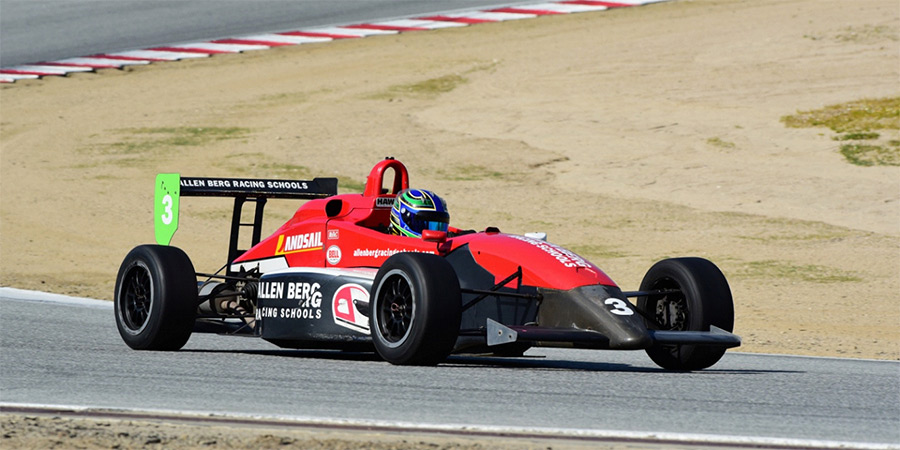 Additionally, the group included two young Canadians looking to advance their professional driving careers. One was currently racing in open wheel F4 competition and was accompanied by both his team owner and personal driving coach. The other was looking to move from karting into Porsche GT3 racing. A Canadian by birth, Berg offers a pathway for up and coming Canadian drivers. His prior exploits in open-wheel F2 & F3 racing, Formula One, and even a run at Le Mans in a Porsche 962 (among other racing appearances) support his credibility and earned him a place in the Canadian Motorsports Hall of Fame. 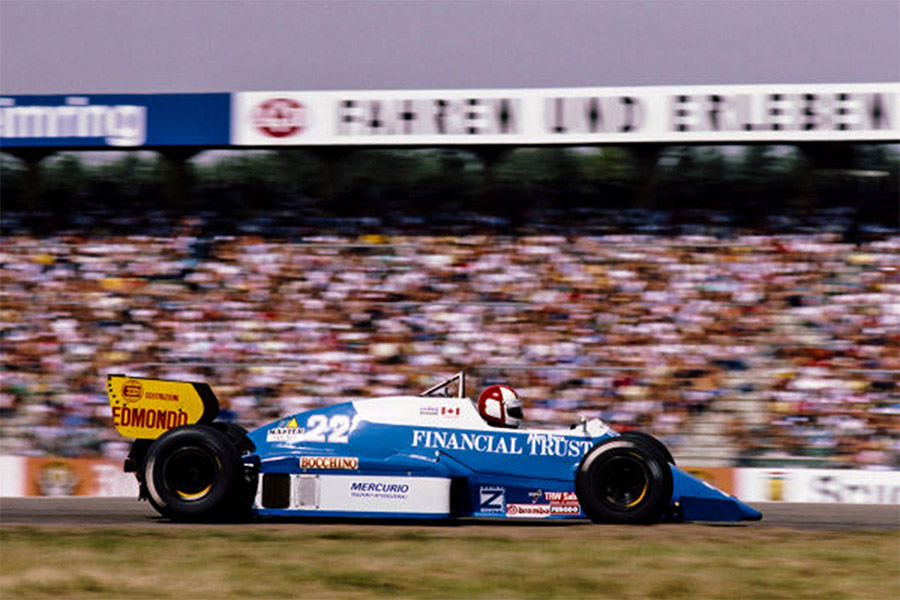 Berg not only organizes and operates the racing school, he is the lead instructor. He is backed by a crew of capable coaches. Many, like 18-year-old Courtney Crone, currently compete in F4 open-wheel racing. Despite her young age, Crone has many years of experience driving karts, sprint cars, formula cars and even motorcycles. 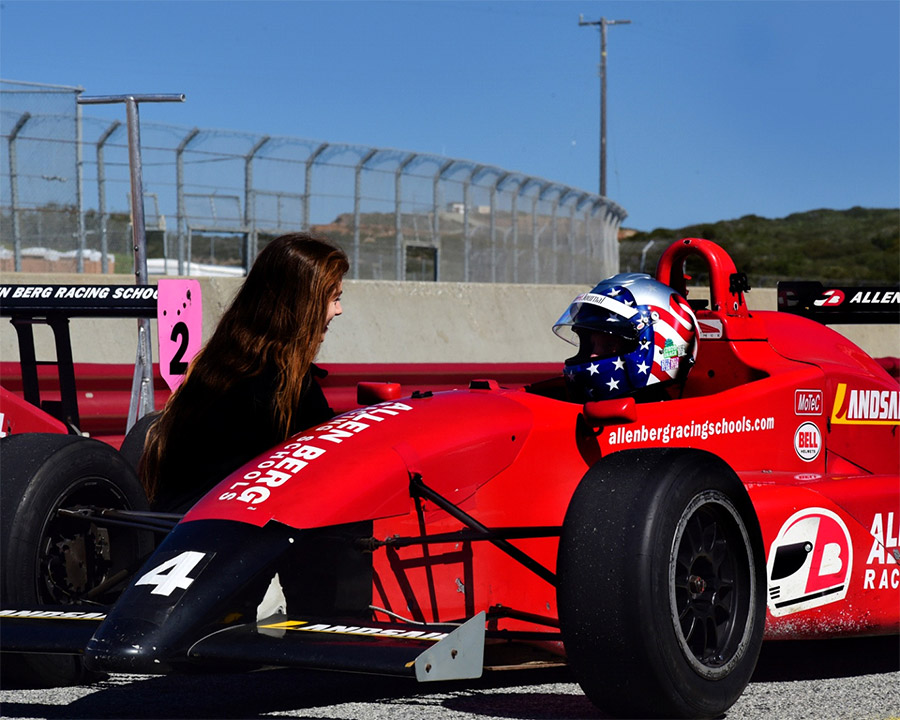 The coaches, although welcoming and encouraging, importantly provided their real-life current track knowledge and experience. At times they worked with individuals or small groups. Other times they were busy taking notes at various corners to provide first-hand feedback. While this was fun, it was also serious and coaches were laser-focused on opportunities for improvement. They verbally explained, demonstrated, drew diagrams, analyzed telemetry and watched video – whatever it took to find progress.

Naturally, as with most driving schools, the program started with classroom chalk talk. A foundation is critical and the Allen Berg Racing Schools train students with a wide variety of backgrounds and skill levels. Berg covered basics of the car such as the seating position, the 5-speed sequential gearbox, and the digital dashboard which most prominently showed gear selection and RPMs. A small removable steering wheel detached to enable access into the tight cockpit. The driver didn’t really get in the car as much as threaded their feet and legs past the bulkhead and into the pedal box. Once seated, the driver has no chance to see their feet. The steering column splits the brake and clutch which prevents left foot braking. The driver’s feet are elevated above their rear end – which is tucked into the bottom of the car only inches from the ground. 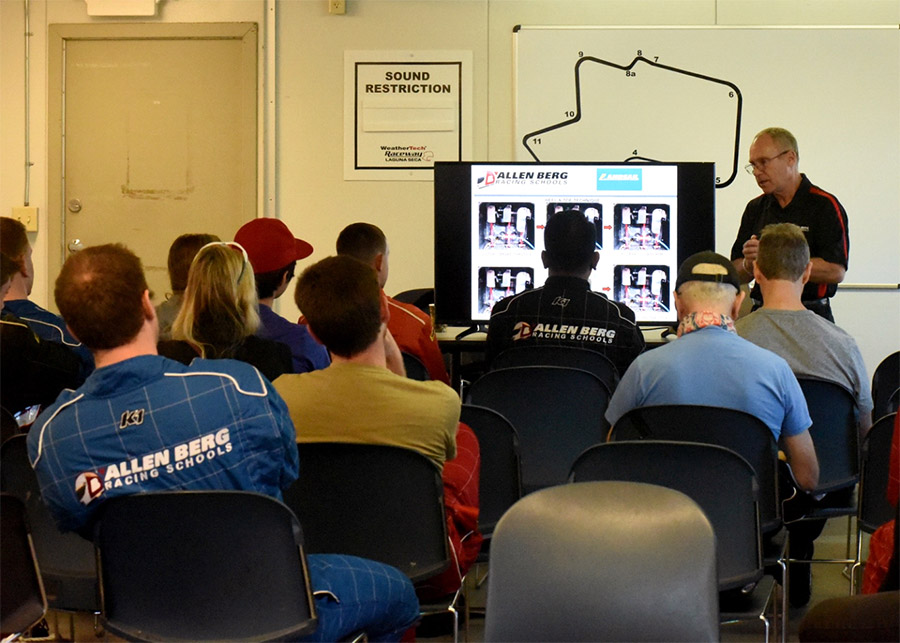 The car itself is an Italian Tatuus carbon fiber chassis powered by a Renault four-cylinder 1600cc engine that pumps out 140 horsepower. A five-speed sequential gearbox manages the power and four slick Landsail racing tires connect the car to the pavement. The car is perfectly weight balanced with equal distribution side to side and front to rear. The package is good for a top speed of 130 miles per hour, 0 to 60 miles per hour in under four seconds, and a full 2 Gs of cornering force. The car tips the scales at only 1,000 pounds, making for a potent power-to-weight ratio. The aerodynamic bodywork and front and rear wings make clear statements of racing intent. 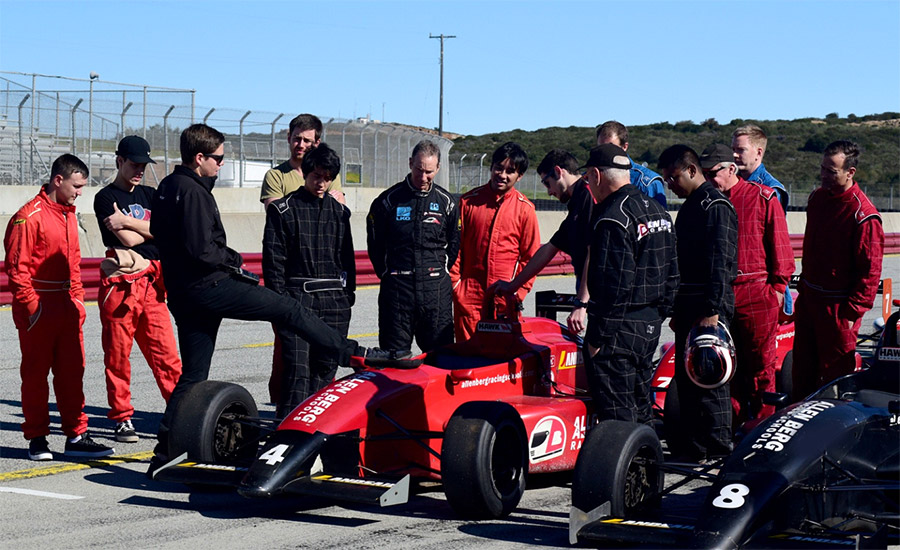 Logistics addressed, the chalk talk moved to technique. Braking and heel and toe technique topped the agenda. Unlike most cars, a heavy foot activates the brakes and a lighter touch feathers them deeper into the braking zone. Pedal travel is minimal. Heel and toe must become instinctive to manage weight transfer. With a light formula car, the effect of weight transfer is exaggerated as the driver steers the nimble race car through corners. Ideal lines through the corners maintains momentum and maximizes exit speeds. 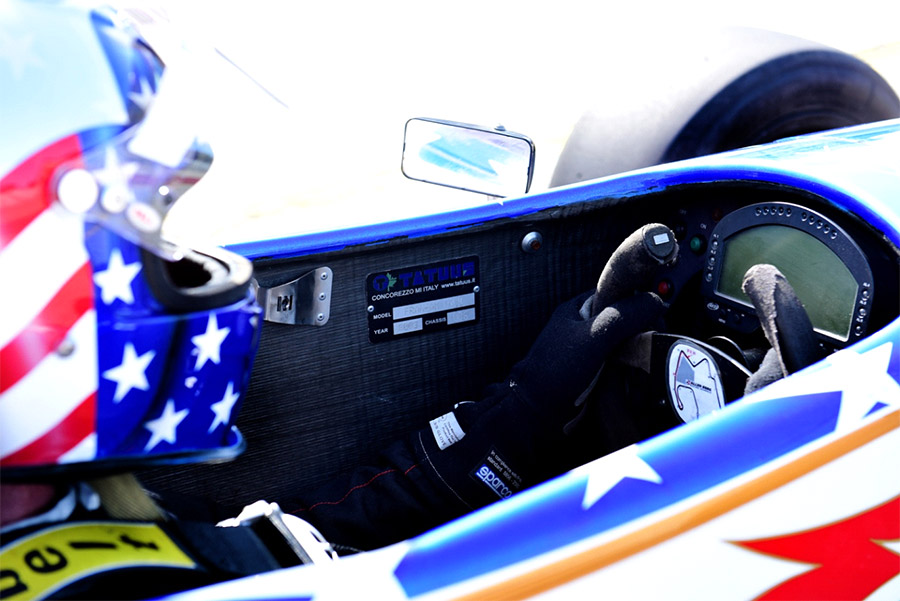 With classroom time complete, the group piled into vans driven by coaches for a guided track tour. Upon return, the group divided in half. The first started with lead-follow laps behind coach-driven Ford Mustangs. Drivers followed, peeled off to let the car behind follow, and repeated the process. Drivers learned the cars and track with the orientation laps rather than pushing for pace. Coaches spread out to different parts of the track with the second group to observe and learn before they took their turn at the wheel. 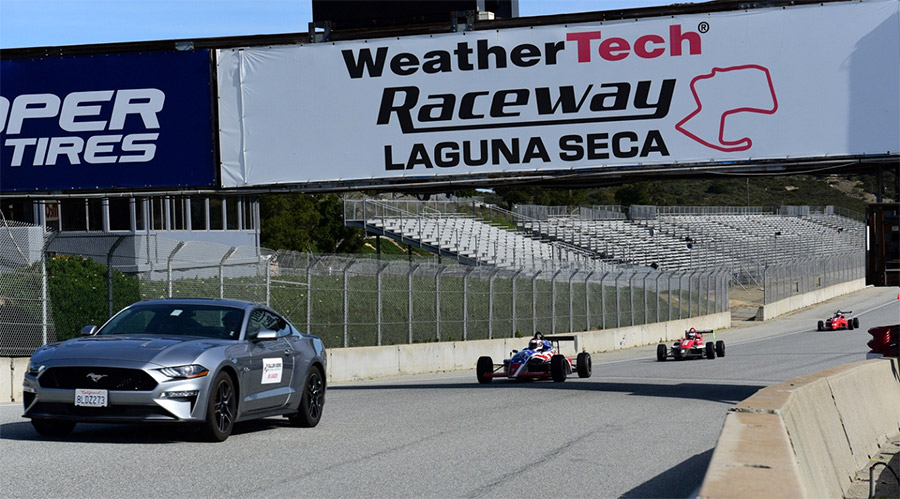 Family members and friends came along for a day at the track as well. They enjoyed the time trackside in pit lane and Berg and his coaches included them in outings around the grounds. It made for a relaxed and collegial atmosphere. 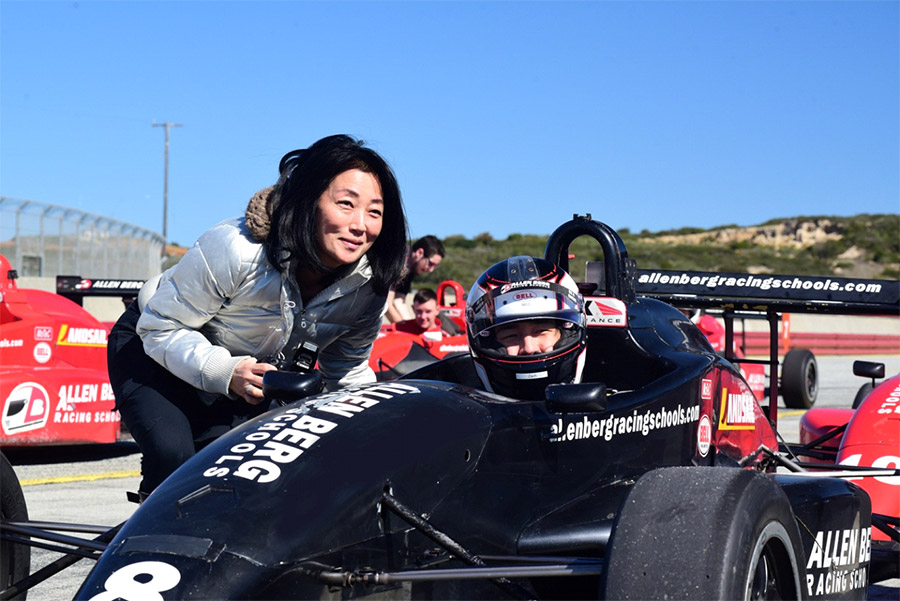 After a pause for lunch to refuel, another lead-follow session and opportunity for observation kicked off the afternoon. Berg took the group to turn 2 and pointed out braking points and the late double apex, with cars on track showing both ideal and less than ideal ways through the corner. 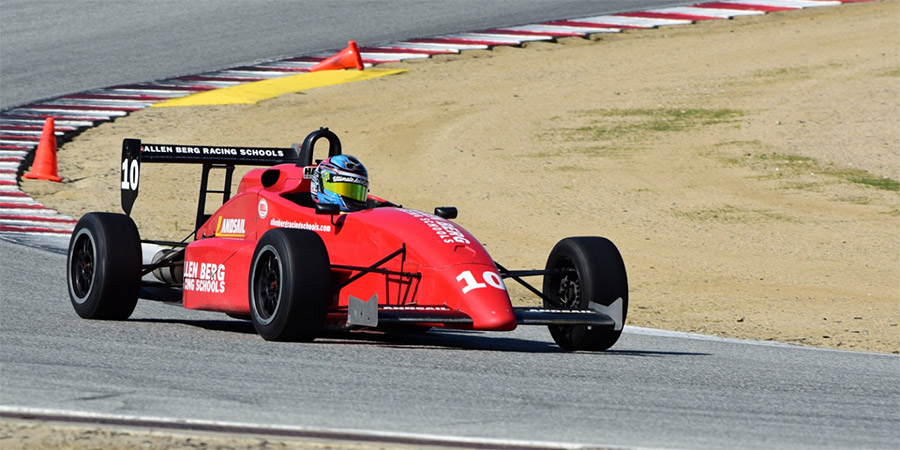 Armed with foundational knowledge of the car and track, the group was ready for open lapping. Each driver’s helmet was equipped with a camera under the visor to record their view. No secrets, so coaches and students would watch later to hear engine revs and see racing lines, tire positioning and where the driver was looking. 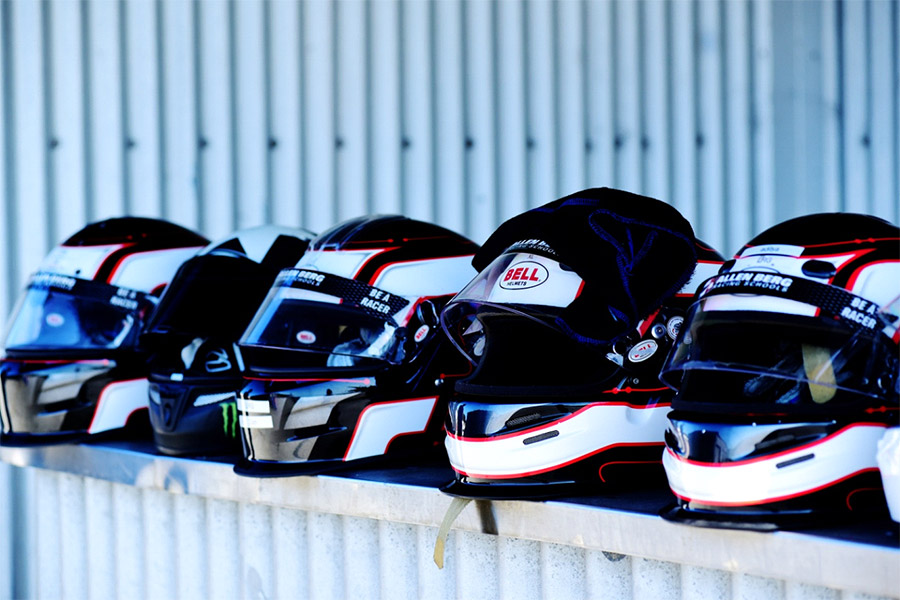 Coaches set no specific limits but cautioned students to be aware of their own limits. Slower cars pulled aside on the front straight to let others pass by. Again, coaches spread out to different corners of the track and made notes to be shared later. 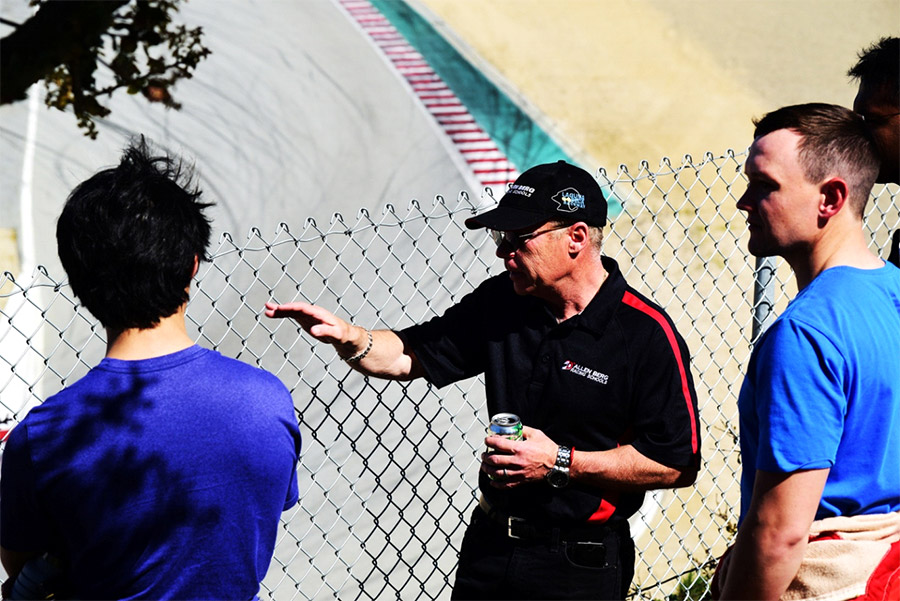 The day concluded in the classroom watching drivers’ eye videos, sharing notes, and receiving coaches’ feedback. With so much racing background, the coach’s insights were keen and directly relevant. 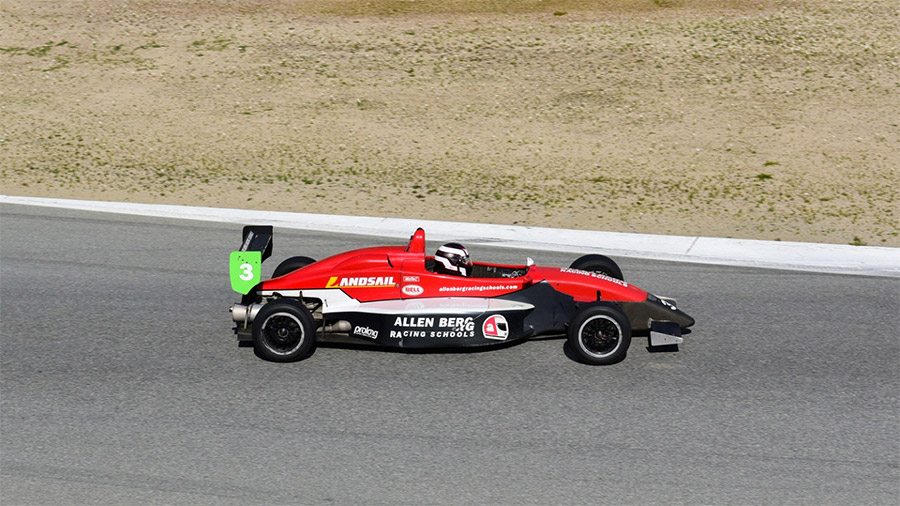 Day two began with more classroom time. Berg again led the session and the topics quickly got technical. The group discussed braking techniques, including ideal pedal pressure and braking just short of locking up a tire. Berg then turned to physics and talked about the limits of tire adhesion. Making a tire brake and turn at the same time is asking a lot when that tire only has so much grip to give. Ideally, a driver “separates loads” by braking and accelerating in a straight line and gripping when in the turns. Applying this knowledge, particularly when traction is scarce such as in the rain, is what separates good laps from great laps. 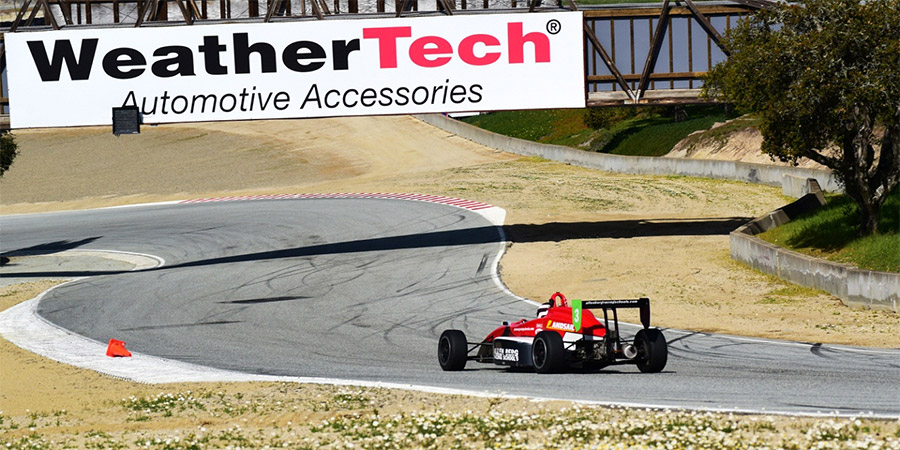 The chalk talk time was well spent and soon it was time to return to the track for open lapping. Passing was now permitted on the front stretch and flaggers helped manage faster cars to pass slower cars. Each student pushed at their own pace and comfort. If there were no cars to pass or let through, drivers stayed on throttle for nearly the entire front straight. 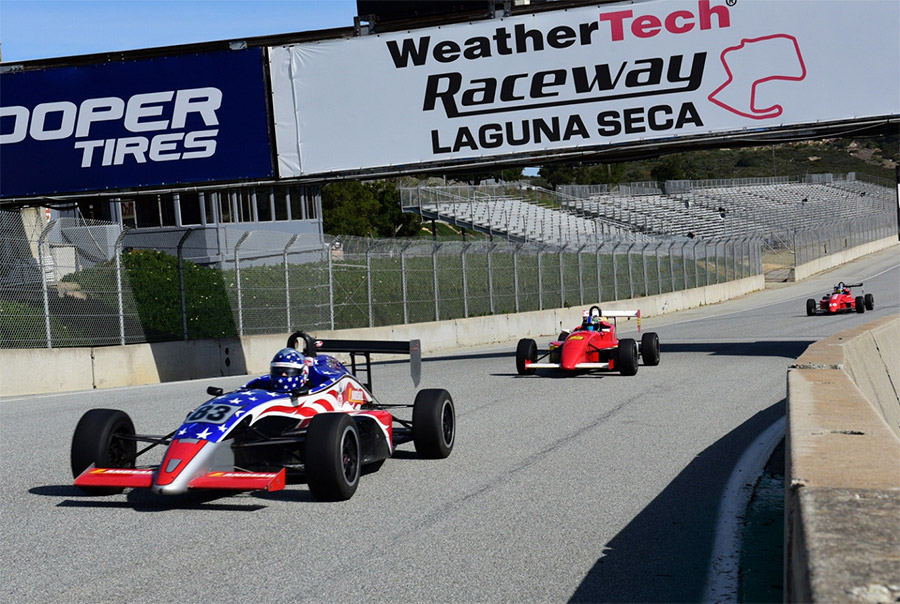 Session breaks allowed time to de-brief with the benefit of on-board camera footage and telemetry. The data doesn’t lie and being able to identify opportunities for improvement accelerated the learning curve but also pointed out areas of strength to maintain. 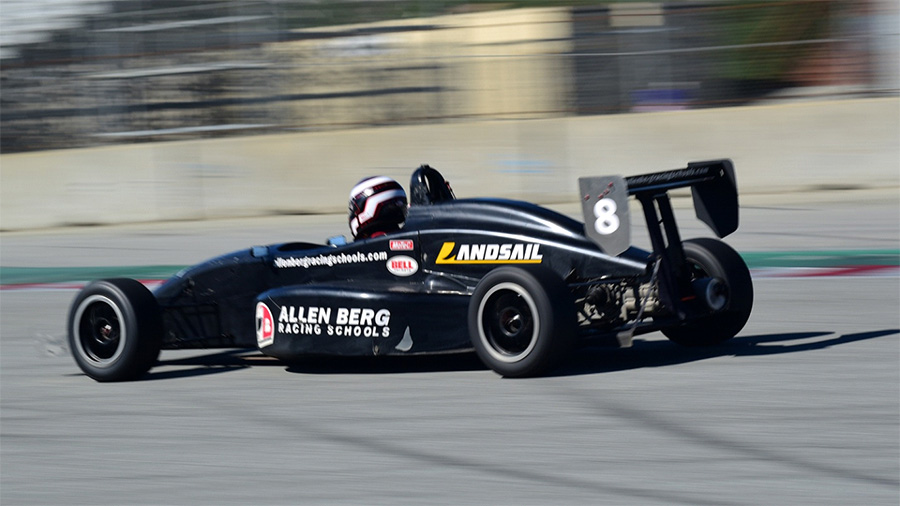 The students began to drive by instinct rather than mechanically think through each action. The digital dash data became less important as the ear and sense of speed were sufficient to inform the drivers’ brain. Challenges, however, remained for the unwary. For example, the sequential transmission operated by pushing forward to downshift and pulling backward to upshift – and not the other way around. Those accustomed to moving through the gears of a traditional H-pattern got a jolt if they attempted to move the gear shift sideways in search of a higher or lower gear. 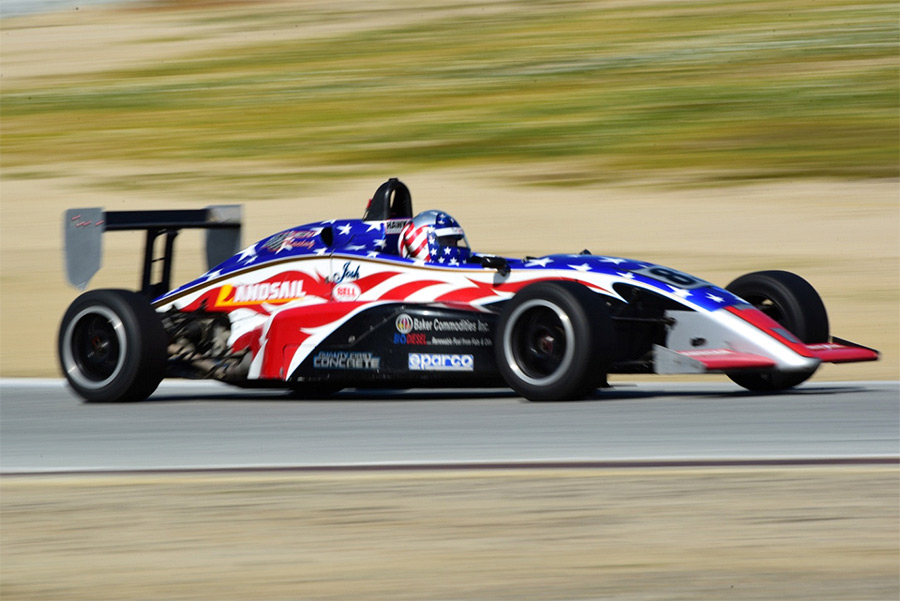 The larger group broke out into smaller groups organized by comparable drivers. Francis joined the two Canadian youngsters in lapping at speed. Comparing telemetry was valuable and clearly illustrated the difference that youth and exuberance makes at the limit. The two Canadians recorded G loads of 1.3 and 1.5 through the fastest turns where Francis turned 1.1G. The incremental differences in the corners made for faster laps but otherwise their lines were fairly similar. 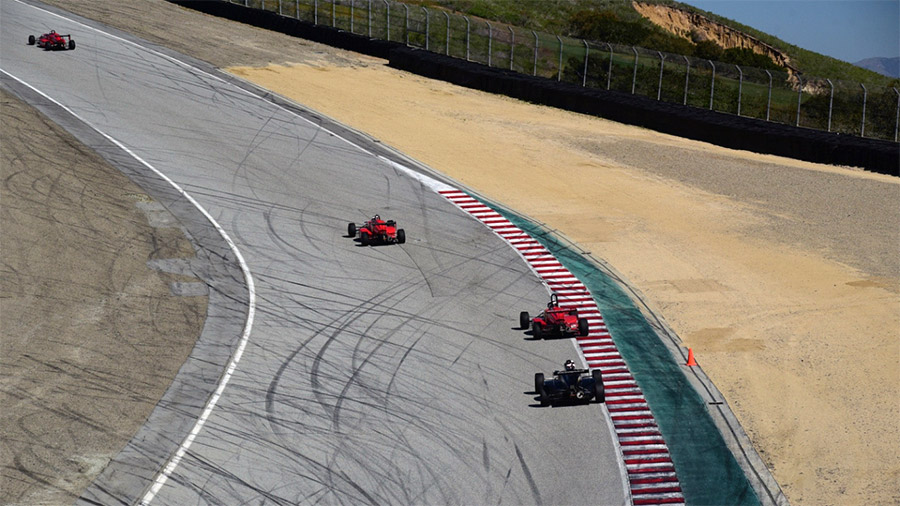 The very low seating position highlighted the sightlines to the front tires and moving front suspension. The open cockpit eliminated window pillars or windshields that would otherwise obscure the view. Each of the track’s individual curves and bumps became easier to spot and navigate. The driver’s task was to place the tires precisely where they wanted the nimble formula car to be. 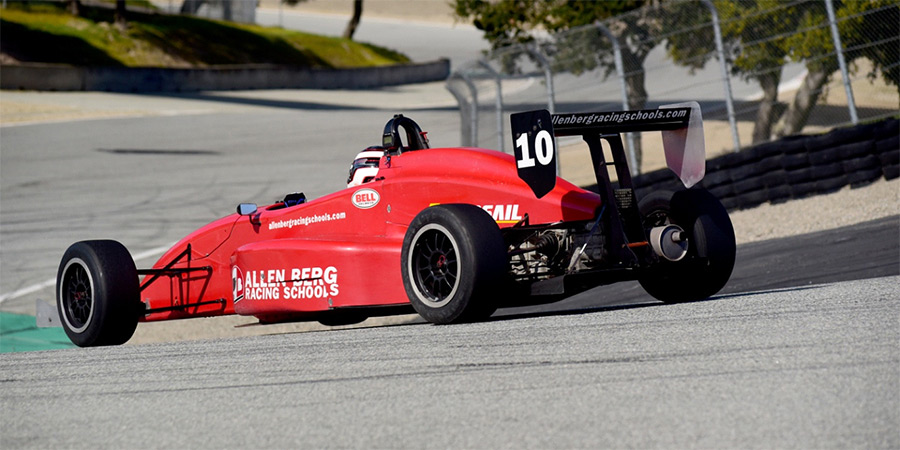 At times, the brain struggled to believe that the car could carry such speed into and through a corner, but the on-board videos and telemetry provided confidence. Immediately seeing where other drivers lifted (or didn’t lift) and braked (or didn’t brake) was valuable and timely. The aerodynamic downforce from front and rear wings and the slick Landsail racing tires kept the car planted but the brain needed to believe the grip was there when the driver pushed hard. 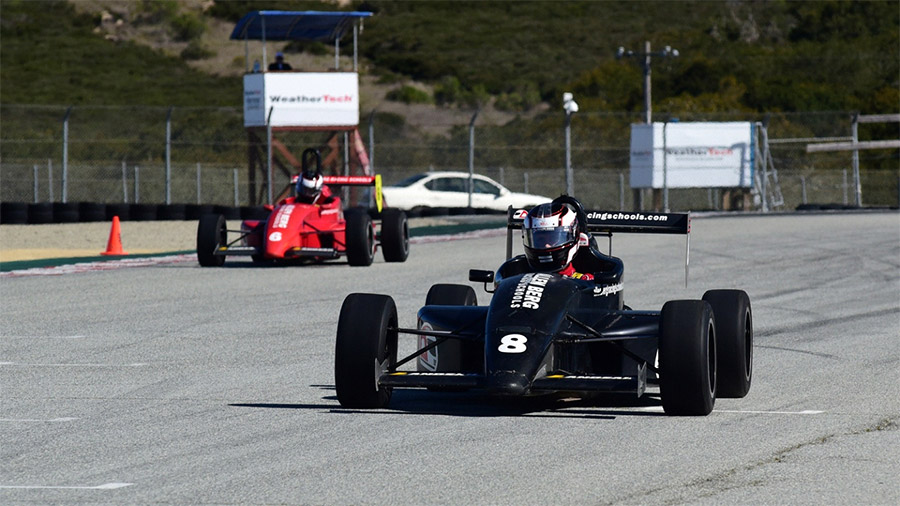 The cycle of driving, working with telemetry, and then returning to the track to apply the knowledge was an enormous benefit of the Allen Berg Racing Schools. For those looking for an enjoyable experience or to improve their personal skills behind the wheel, the process is unique and effective. For those looking to use the school as a stepping stone towards serious competition or a professional career, effectively utilizing telemetry data is mandatory. 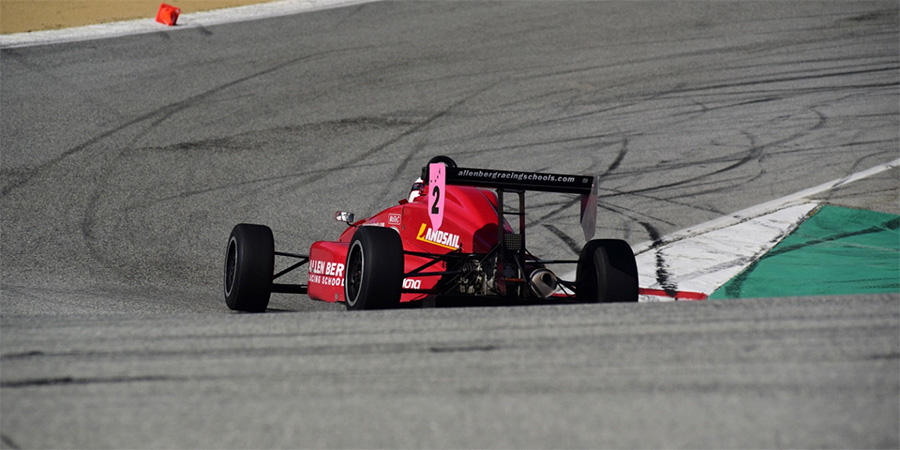 The second day maximized track time as students mostly needed experience at this point. There was little down time. One group would leave the track after their laps and another would rotate in after their de-brief. The process was efficient, the coaching and feedback crisp and effective, and the breaks were just enough to give each driver’s brain a chance to rest and reset. 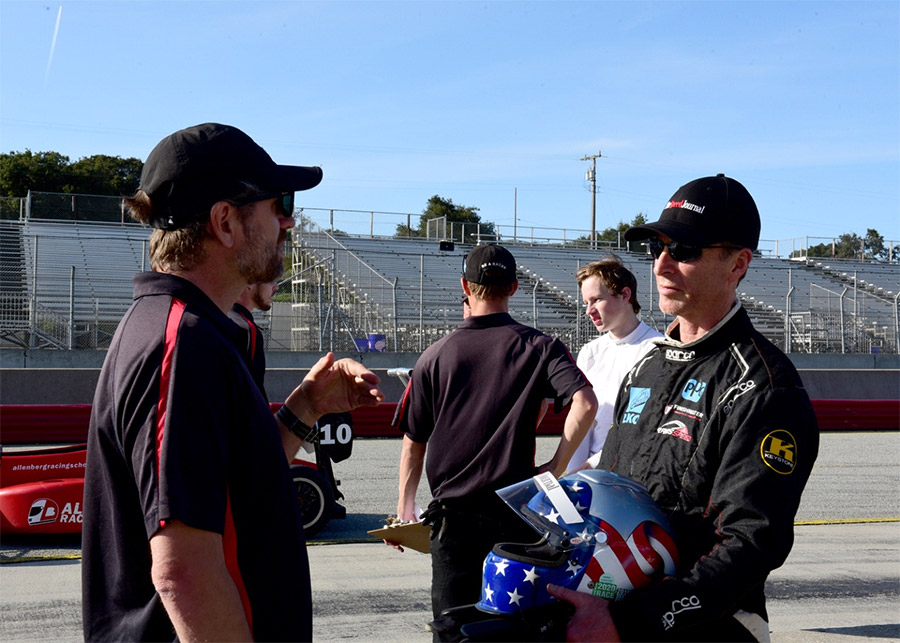 After two days of driving an open-wheel formula car at full speed around the dramatic curves and elevation changes of Laguna Seca, the contrast with heavier two-door sportscars or four-door sedans was stark. While sportscars may offer more in terms of interior comfort, raw horsepower, styling, and room for a passenger or navigator, the purpose-built formula car is a precision instrument. Nothing unnecessary, lightweight, agile, laser focused on the task, and visceral. 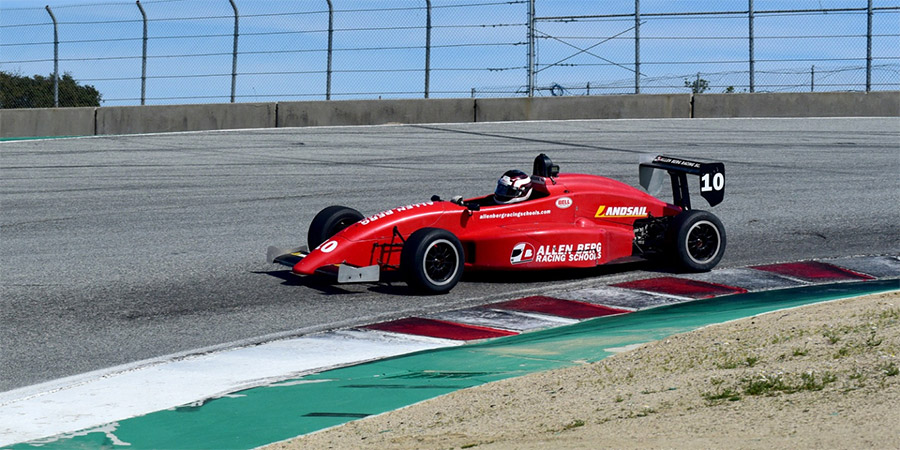 Track time (or the lack of track time), can make or break a racing school.  Allen Berg Racing Schools ensure plenty of track time, and the atmosphere was relaxed and personal. 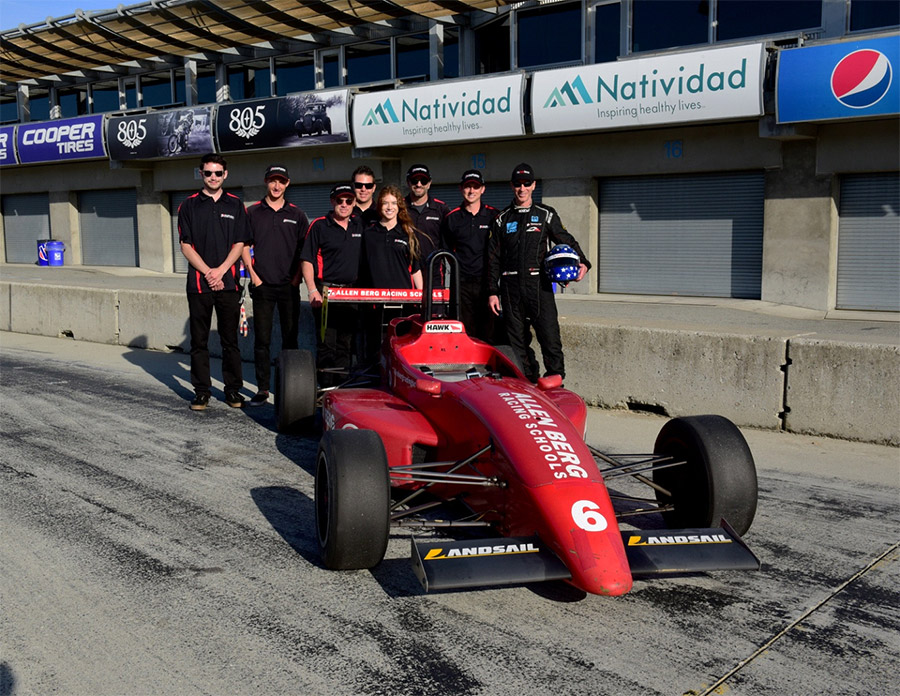