Just over three hours by car north of London, Ginetta cultivates a field of dreams at their Blyton Park track day home. Guests taste motorsports magic through 1.6 miles and nine corners of tarmac 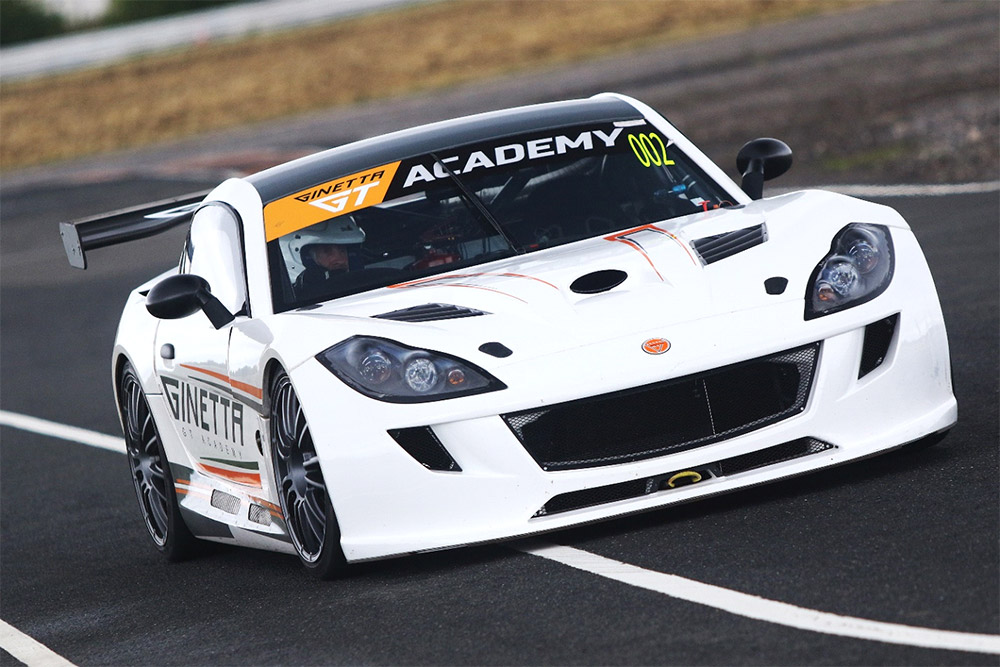 Nobody ever claimed that motorsport was easy on the wallet. Compared to a mountain hike, smacking a little fuzzy ball back and forth, or sitting on the beach, racing costs money. But not all racing requires investments in hypercar equipment. For those focused on getting value from their spend, the Ginetta GT Academy is worth a look. 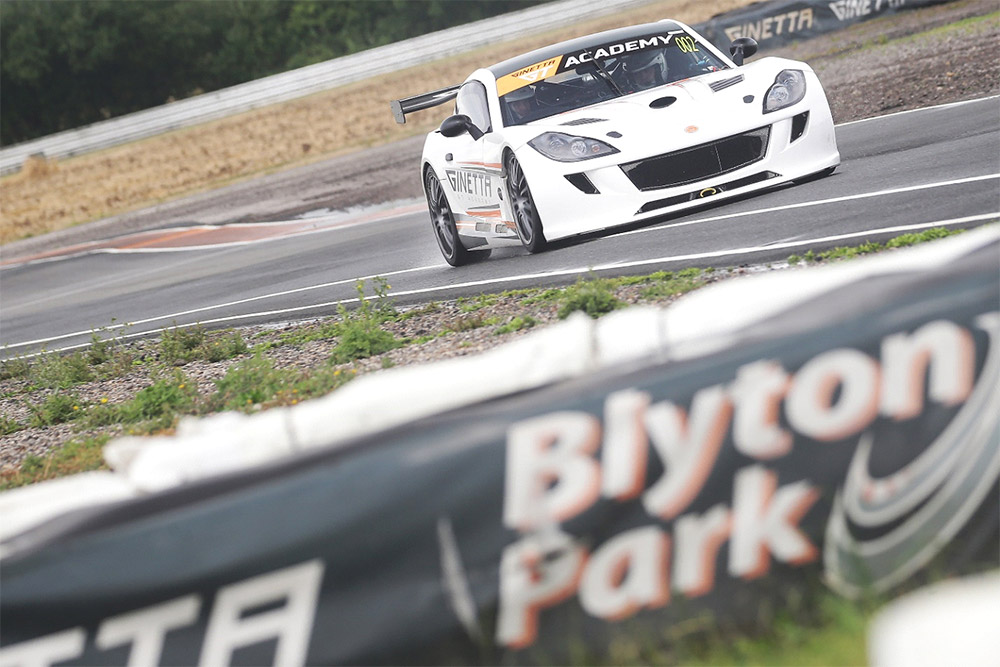 Just over three hours by car north of London, Ginetta cultivates a field of dreams at their Blyton Park track day home. Guests taste motorsports magic through 1.6 miles and nine corners of tarmac. Like most tracks in England, Blyton Park traces its roots to World War II and the Royal Air Force. 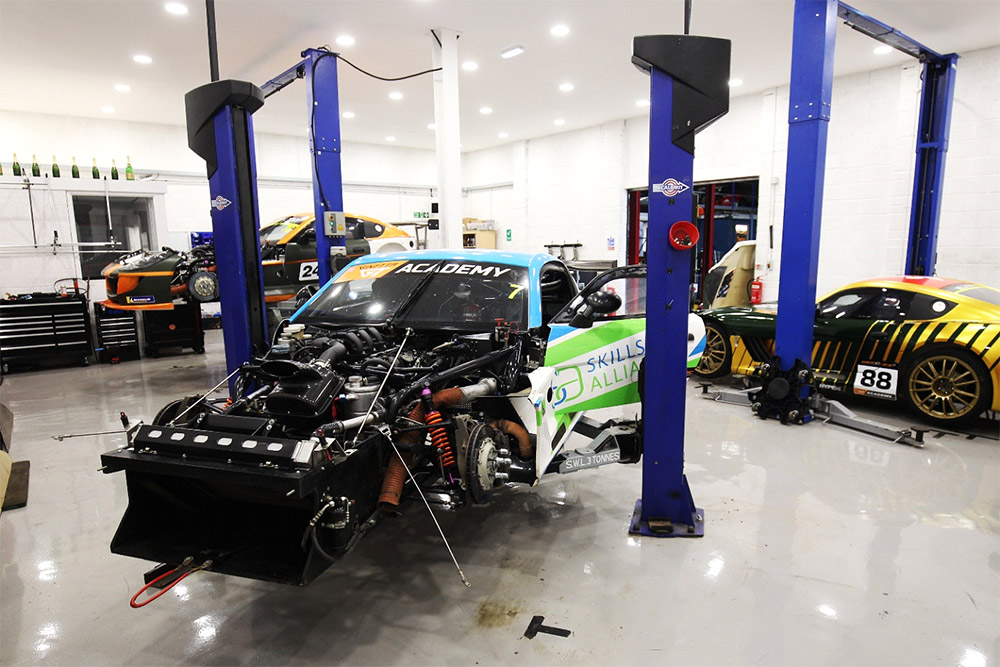 Ginetta is one of the few British-owned specialist car manufacturers remaining. The company was founded in 1958 by four brothers. Decades of low production cars in a wide variety of flavors followed. The company was acquired by racer Lawrence Tomlinson in 2005 and has grown in strength and depth since then. Every Ginetta is produced in a state-of-the-art, 75,000 sq. ft. factory just outside of Leeds. Blyton Park is about an hour away.

Speed Journal Principal Jeff Francis enjoyed a few hours of open lapping at Donington Park in 2019 at the wheel of a Ginetta G40. (Read more about that experience and Ginetta history here.) He couldn’t resist the opportunity to revisit the Ginetta team and spend a day at Blyton Park testing the Ginetta G56 GTA. 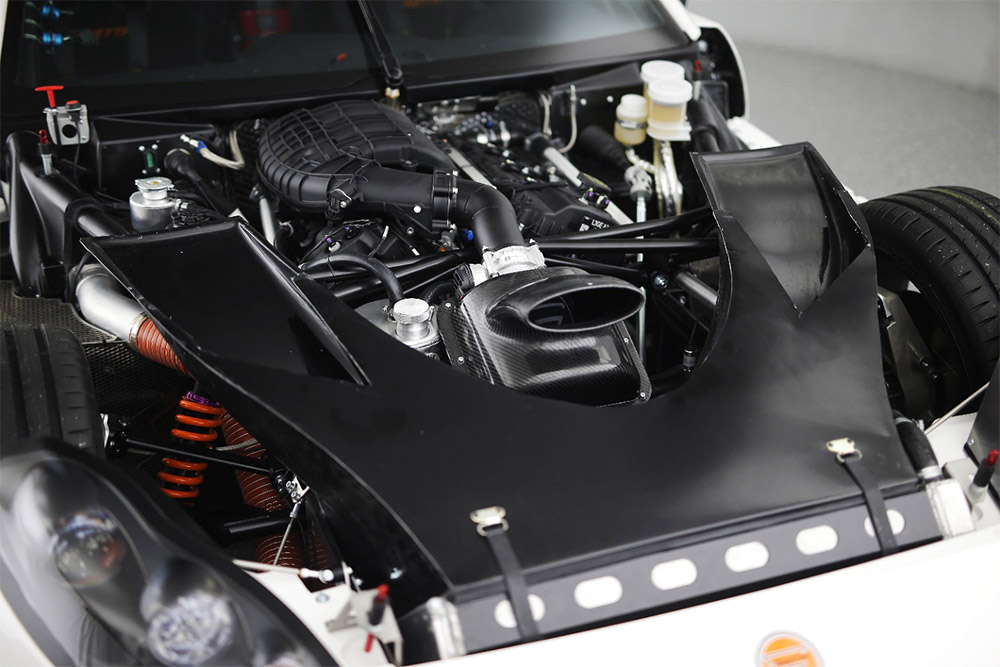 GTA in the Ginetta world stands for GT Academy. The G56 takes lessons learned from G55 GT4 competition and delivers them in a package for the budget conscious amateur racer. The formula is simple – front engine, rear-wheel drive, 3.7-liter V-6 engine making 270 horsepower, 2425 pounds (1100 kilograms), paddle shift and equal weight distribution front and rear. The G56 GTA is not street legal, but is designed as the next step for a driver ready to graduate from tracking their daily driver on the weekends. 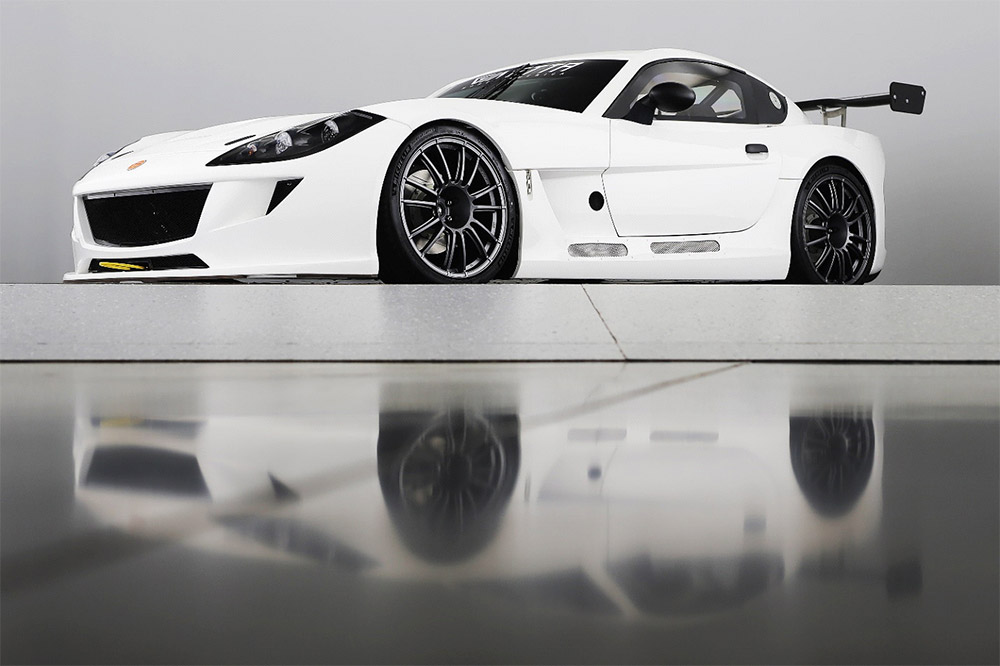 The G56 GTA looks like a model that is beautiful without fancy clothes or makeup. It looks like a natural racer. It is not a race version of a mass produced street car. Modest scoops adorn front bodywork that slopes down to an angular nose, with bodywork that wraps around headlights and inlets. A large wing stretches across the rear bodywork, pushing the tires into the track. Features that would be styling cues on other cars are functional on the Ginetta – vented rockers with hidden exhaust pipes peeking through, large exhaust vents in the front bonnet, and center dual exhaust above the aggressive diffuser. Otherwise, the G56 is not adorned with needless bodywork or decoration. 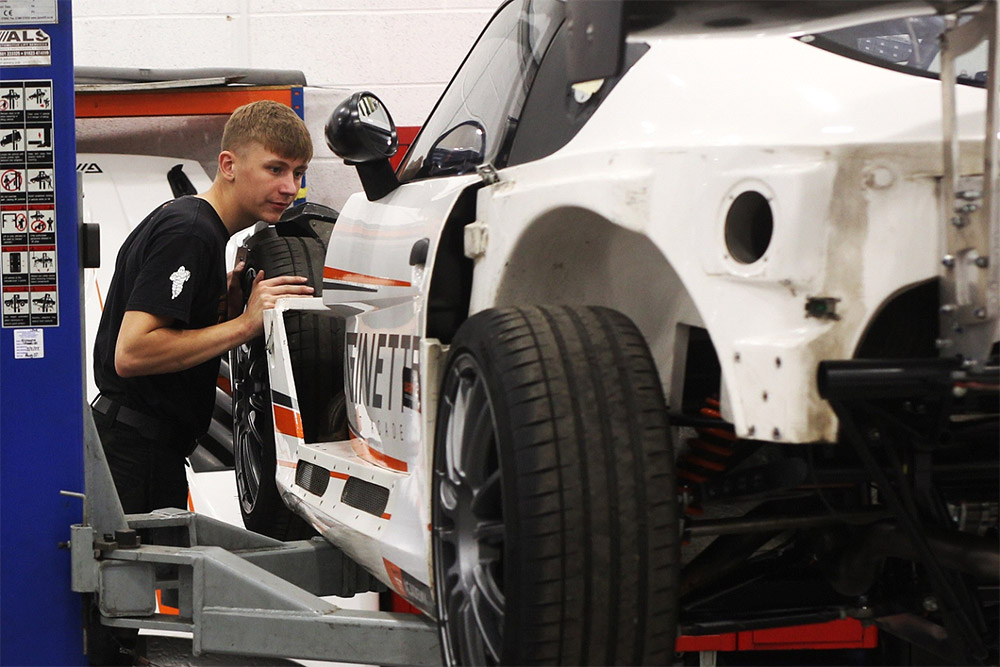 The G56 GTA is Ginetta’s pathway to amateur racing through the single-marque series. The point is to keep cars mechanically equal and avoid a budgetary arms race which reduces the number of variables and gives the drivers a chance to develop their skills and compete. Ginetta knows their race cars are going to see action. The G56 is designed with repairs and crash damage in mind. Things happen, but the goal is to make it easy and cost-effective to get the car back on the track. Ginetta keeps the shelves stocked with spares if the worst should happen. 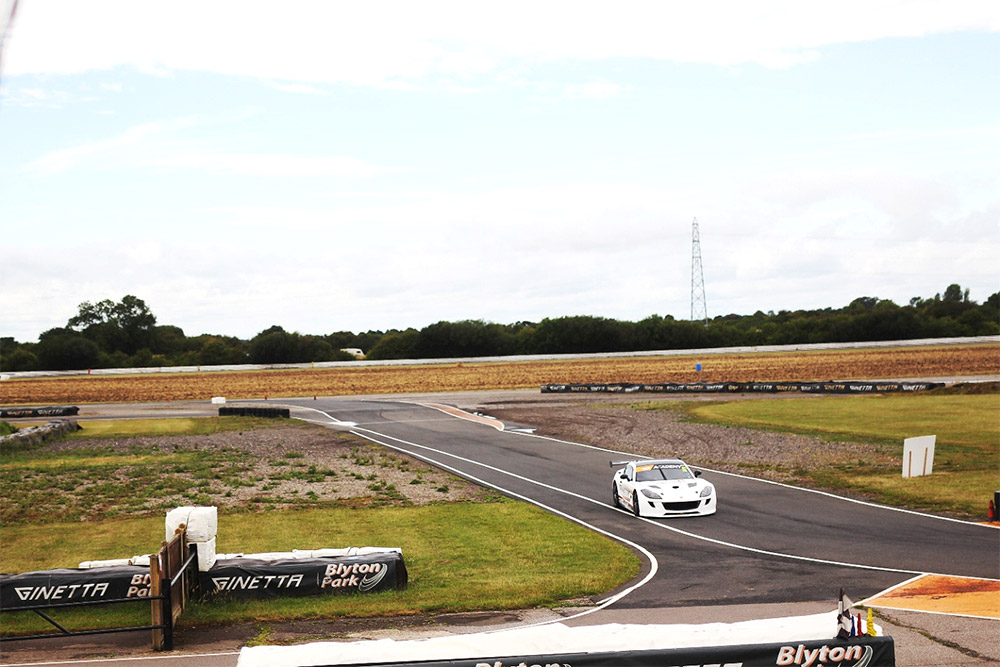 Ginetta uses the Blyton Park facility to give prospective buyers a place to test the G56 and introduce new owners to their cars. The circuit has acres of runoff and no walls crowding the corners, so a driver is more likely to hit a stray cone or hay bale than anything else if they get out of shape. 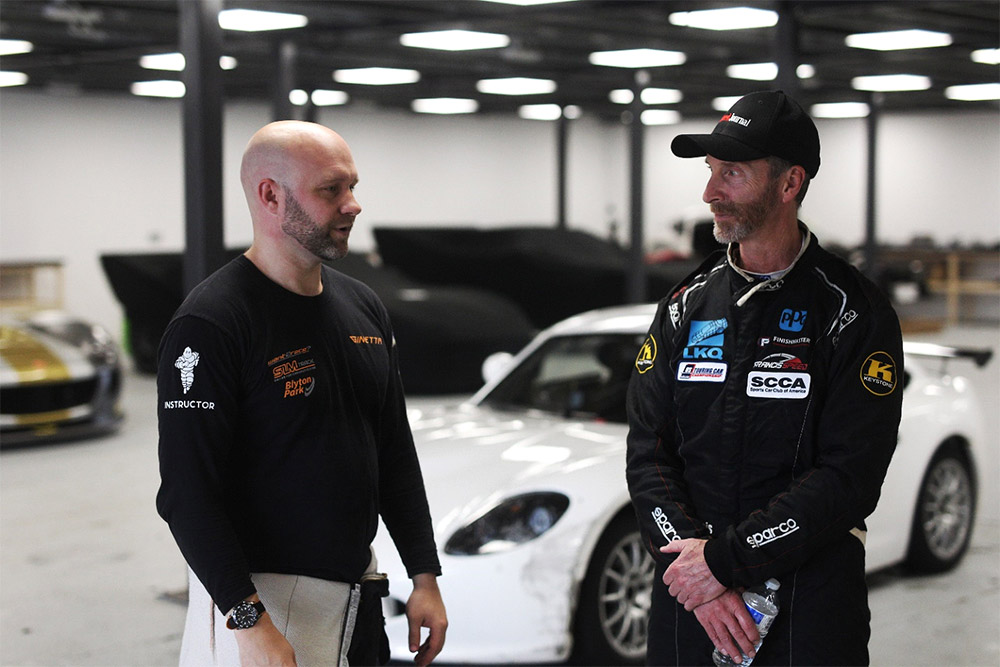 Under cloudy skies and intermittent rain, racing driver and driving coach for the day Jamie Falvey took the wheel for the first session and showed the wet racing line. Under heavy braking, he steered off line where the pavement was less polished and offered more grip to make his turn in. He avoided painted lines on the pavement and curbing. 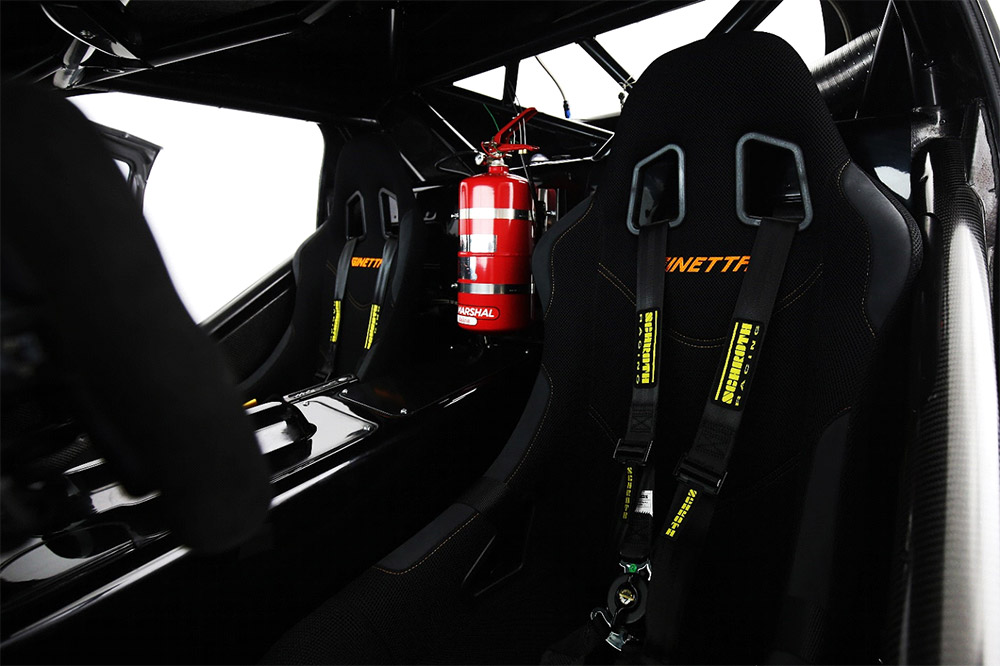 Entering the cockpit through the roll cage does not require the flexibility of a gymnast. The removable steering wheel won’t need to come out for most drivers to get into the seat. The adjustable seat moves forward and back to give additional legroom. The G56 also features an adjustable steering column. Once situated, the racing harness holds the driver firmly. The seating position is natural and provides respectable visibility out the windshield and side windows along with good rear vision from the three mirrors. A latticework of FIA approved roll cage and fire system stands ready in case needed. While the G56 GTA is a race car, it comes with road-spec Michelin Pilot Sport 4S tires rather than slicks. The tires are predictable and forgiving and easier on the budget than specific racing tires. 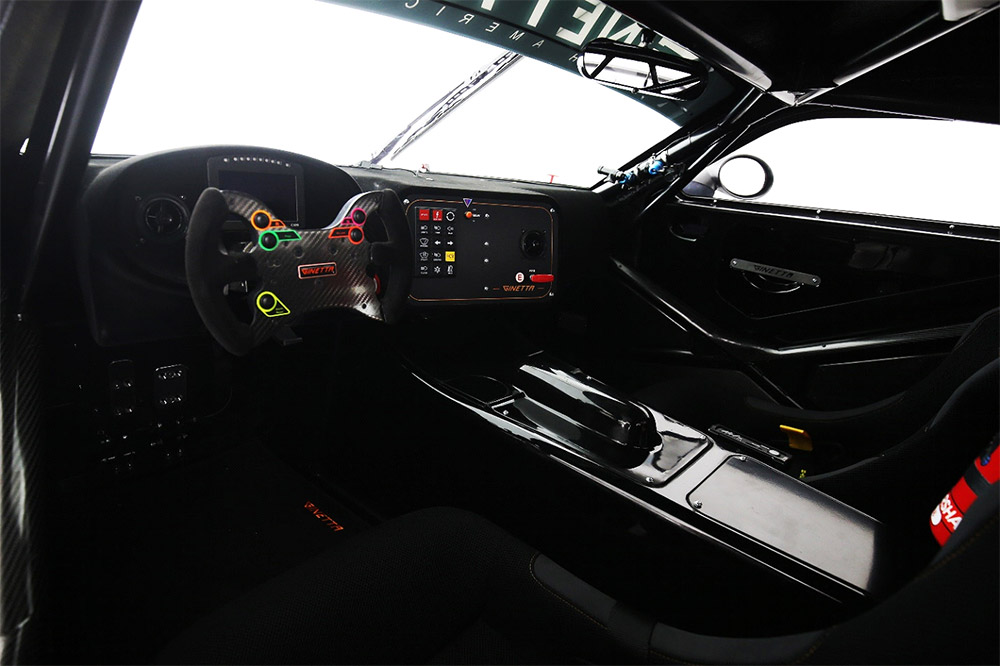 Unlike the G40 that comes with a manual shift, the G56 GTA has a six-speed paddle shift. The clutch is primarily only used for starting and stopping. The paddle shift avoids a mis-shift in the heat of battle and the auto-blip helps to match revs on downshift. 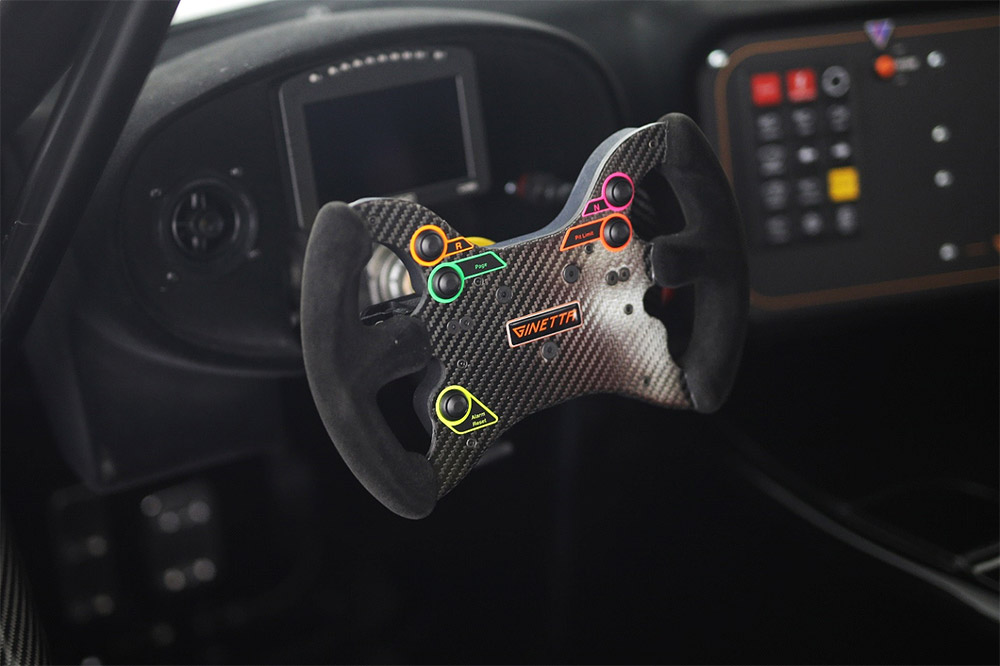 The G56 GTA comes standard with power steering. The racing steering wheel felt comfortable in the hands but wasn’t overwhelmed with buttons and dials – only the necessities including neutral, reverse, and pit lane limiter. The power switch, ignition, lights, throttle map, wipers, indicator lights, and air conditioning controls are located in the center dashboard. A separate brake bias control sits on the dashboard by itself. A full Motec LCD dash system behind the wheel with shift lights along the top that move from green to amber to red. They catch the driver’s eye without distracting the driver or requiring a look away from the road. 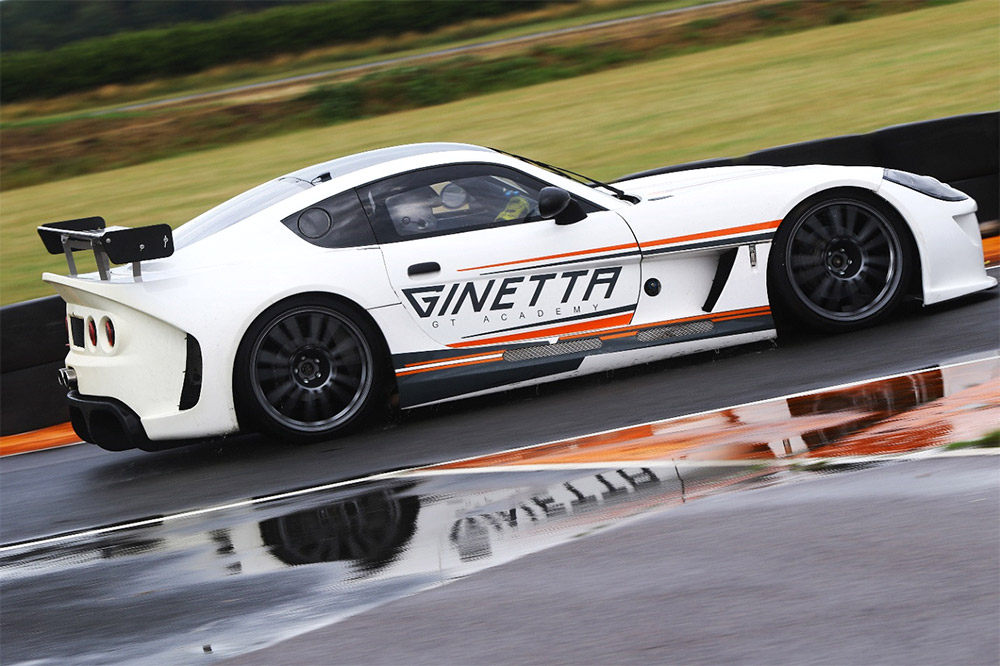 For the next session, Francis took over the controls of the white G56 GTA and Jamie moved to the passenger seat. Once underway, Jamie provided a steady stream of pointers and feedback through the radio communications. As with every circuit and car, there are nuances that don’t come naturally and a good driving coach flattens the learning curve considerably. The session was spent learning the track and car through a drizzle that kept the pavement damp. With no traction control or anti-lock brakes, the driver controls their destiny. After several laps and a cool down lap, it was time to return to the paddock for a breather and debriefing. 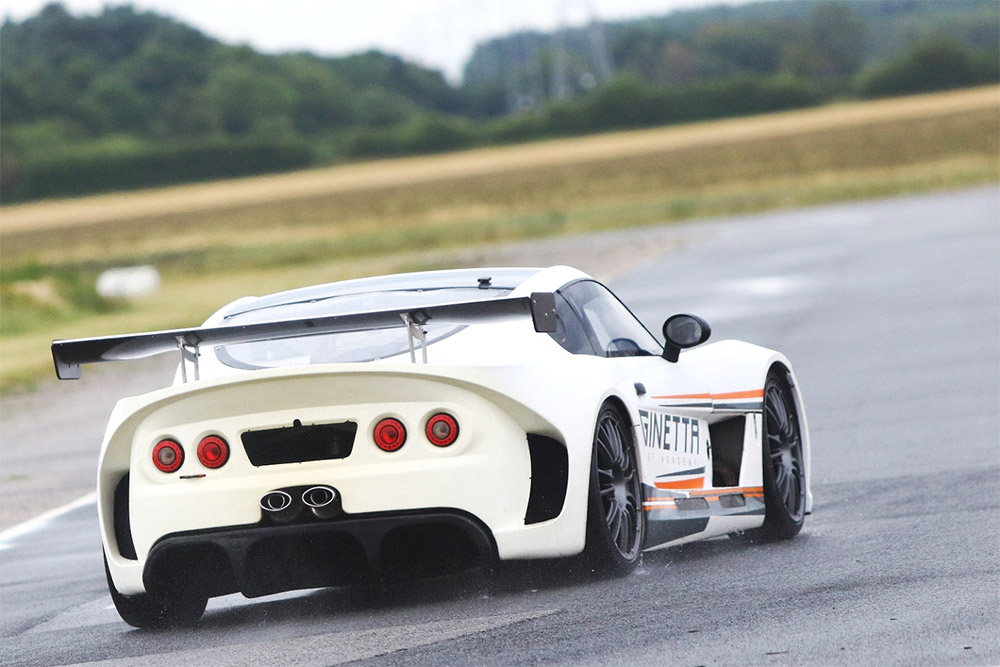 Ginetta’s many years of experience running cars in various championships is evident in the design and construction of the G56 GTA. Based on a tubular chassis with fiberglass body panels, the G56 GTA is less expensive than its GT4 big brother but the performance gap isn’t enormous. 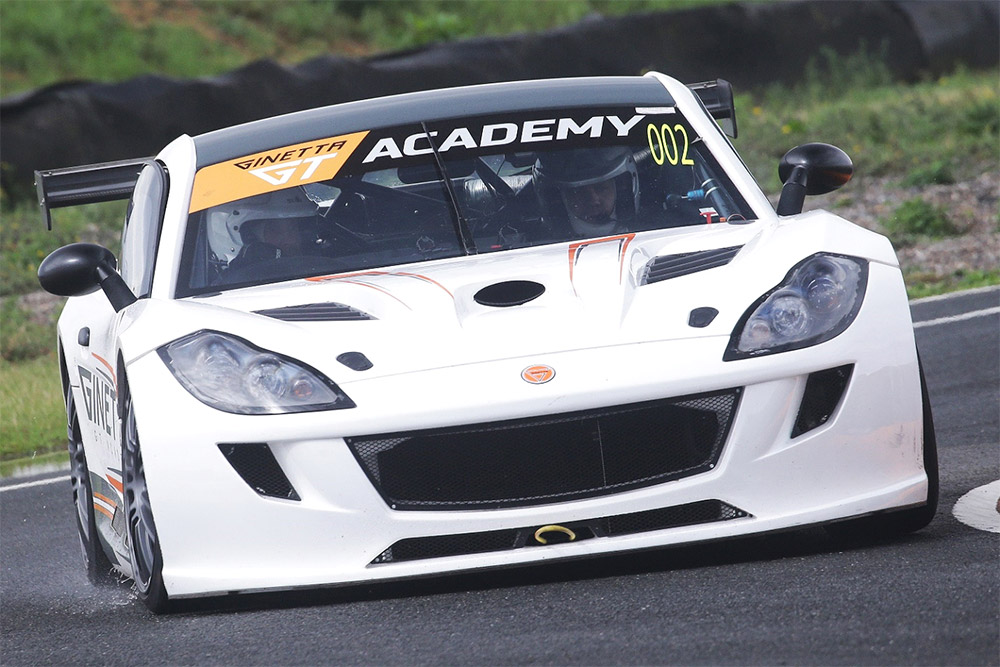 Debrief complete, it was time for another session. Driving coach Jamie again rode in the passenger seat, offering encouragement and feedback. Jamie knew what the car was capable of and now had a better sense of his guest for the day, so he pushed further. His student braked later, carrying more speed into and through tight corners, and letting the car naturally find its way to the edge of the pavement at corner exit. More confidence on the brakes helped push through the chicanes without hurting the car’s momentum. Most of the track felt comfortable in third and fourth gear, but for a drop to second gear through a tight corner and a brief taste of fifth on a straightaway. 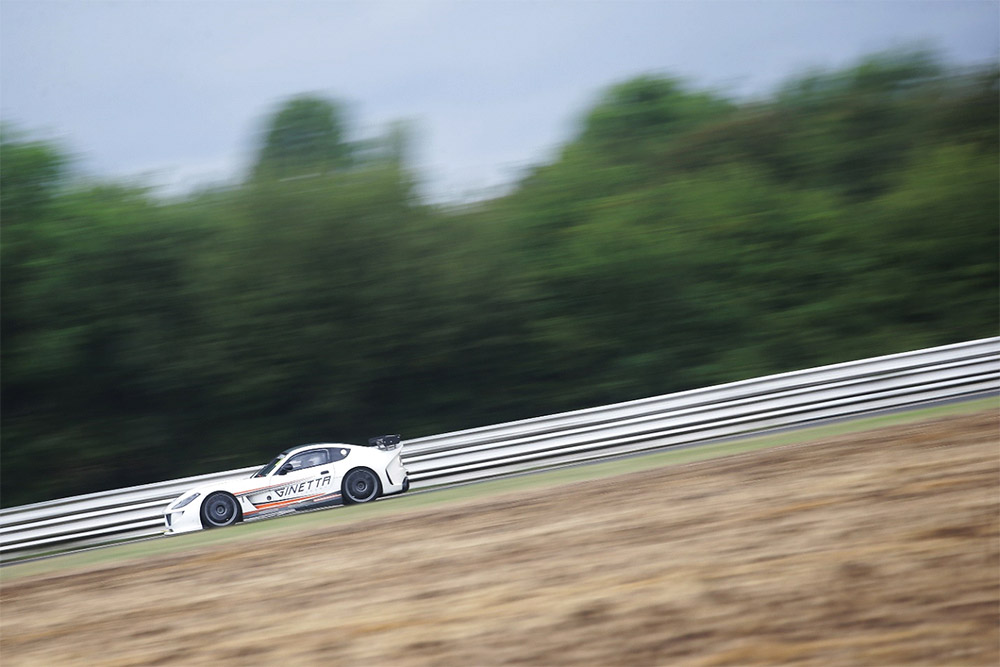 After some time behind the wheel, it became evident why Ginetta has been the choice for many amateurs and budding professionals. Formula One standout Lando Norris is the most well-known graduate from the Ginetta Junior ranks, but many other British drivers have sharpened their skills racing a Ginetta. 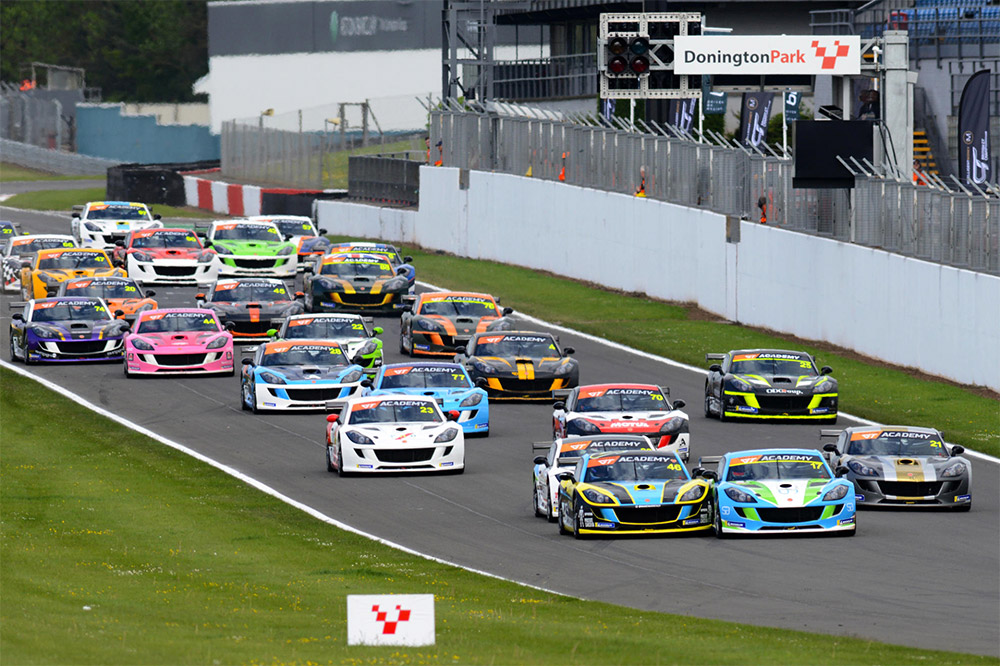 The inaugural 2021 GT Academy season spread 13 races across five weekends at Brands Hatch, Snetterton, Silverstone, and a pair of rounds at Donington Park. Four were part of British GT weekends and one was part of a British Touring Car Championship. Car counts hovered around twenty. Getting so much competitive track time on such high-profile weekends shows how serious Ginetta takes the GT Academy. The 2022 season continued the same model, swapping out Olton Park for Snetterton. Car counts increased by fifty percent. Ginetta extended the success for a similar program in North America in 2022. The US is a growing market for Ginetta – about two thirds of Ginetta’s total production finds its way to America. In fact, Ginetta has a business base in the US near Virginia International Raceway. The G56 GTA will also be eligible to be raced and classified in the SRO America TC championship which races across the country. 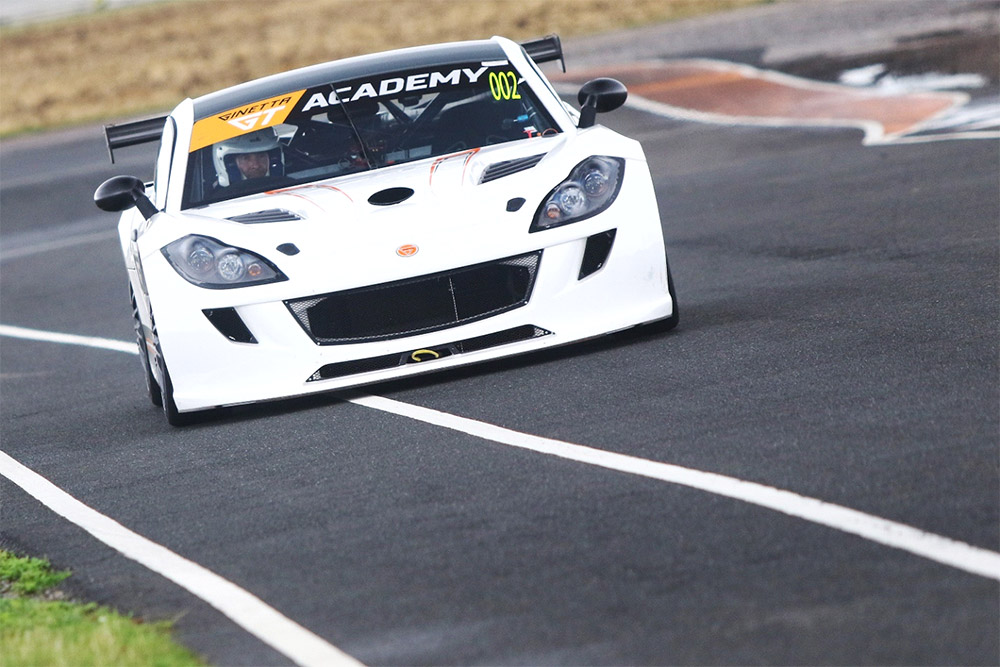 For the final session, the driving coach stayed in the paddock and released Francis to track time on his own. Armed with newfound knowledge and blessed with little traffic on a relatively empty track, it was time to push the G56 GTA. There’s no quicker way to get up to speed quickly than a good driving coach, but there is a sense of freedom and responsibility to go it alone. Mindful of the 270-horsepower available at a touch of the throttle, the wet track required a deft touch to gradually feed power and manage braking. As the track dried out, lap times tumbled. The Ginetta communicated well, allowing car and driver to develop a rhythm. It was still early in the relationship to push too hard, but putting together solid and flowing laps around the Blyton Park circuit was a gratifying parting gift at the end of the day. 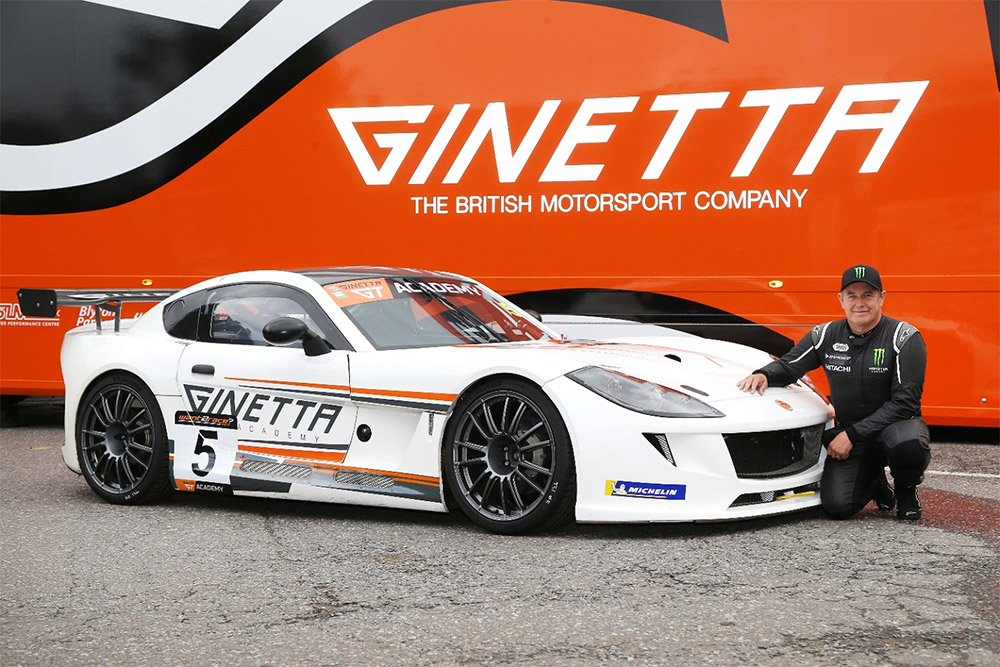 The G56 GTA package has several high profile first timers that validate the concept. Freddie Flintoff, UK Top Gear presenter, went through the Ginetta training program in 2021 with the G56 GTA at Blyton Park. The effort culminated by running his first race at Snetterton. Lest you think the episode was a television stunt, Freddie didn’t even have a racing license at the outset. More recently, Isle of Man motorcycle legend John McGuinness chose the G56 GTA to make his competition debut on four wheels. 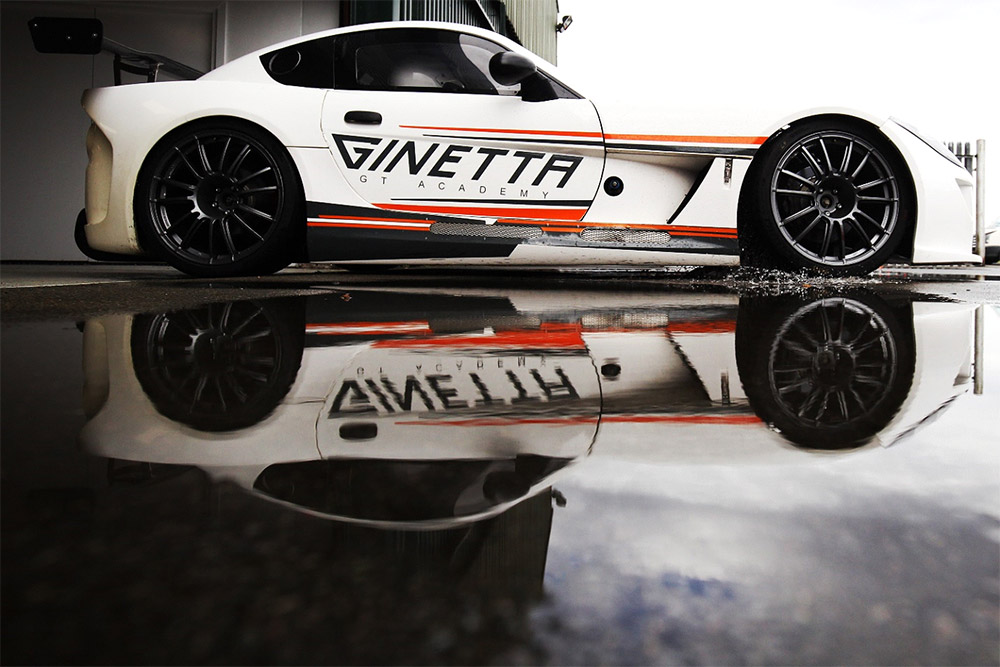 What’s the verdict? The G56 GTA is a user friendly race car but still packs a performance punch. With limited track time and moist conditions, a test outing didn’t stretch the Ginetta’s capabilities. However, the damp conditions helped show that the Ginetta communicates to the driver. The Ginetta is stable and forgiving near the limit. Any race car will bite when pushed too far, but a G56 GTA driver shouldn’t be surprised when they overstep the car’s limits. 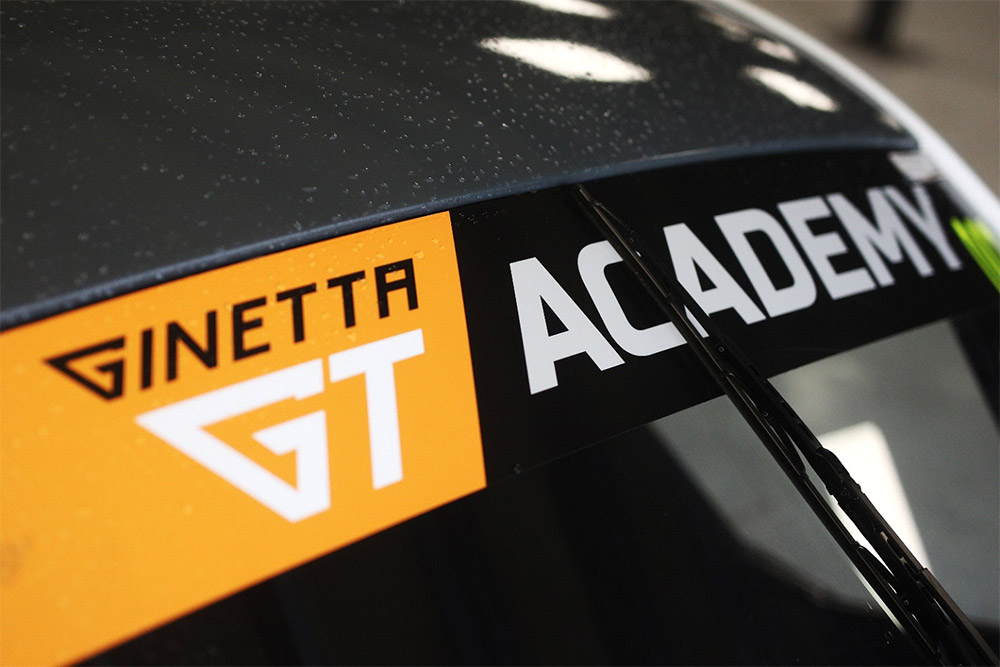 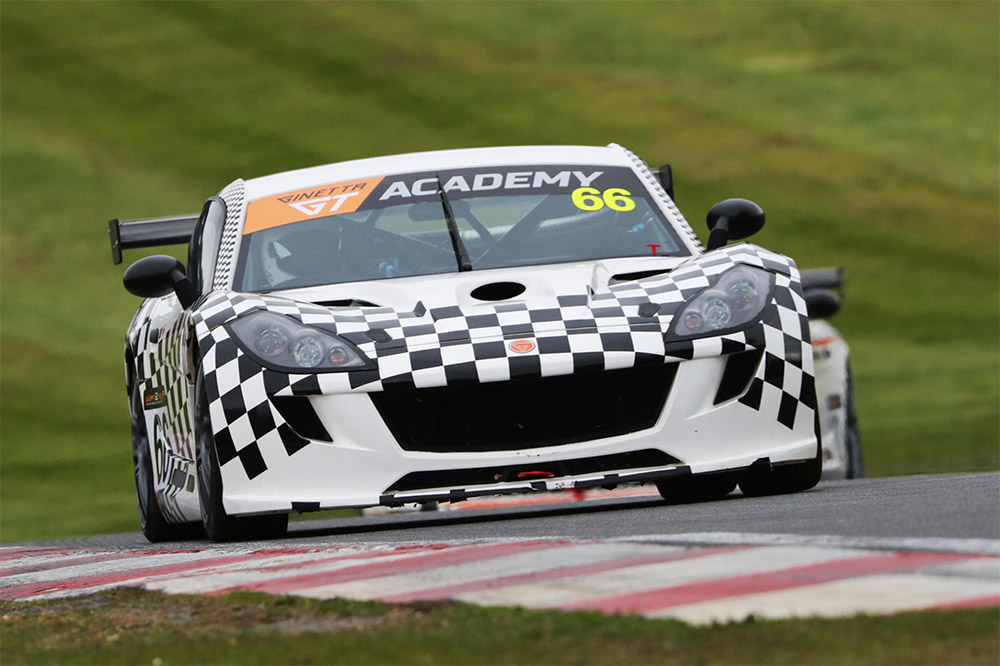 Whether a weekend track car, club racer or an entrant in the highly competitive Ginetta GT Academy race series, the G56 GTA is a cost-effective way to get on track. The fact that it comes with the added pedigree and active involvement and support of an iconic boutique British race car manufacturer is an added bonus.

The Speed Journal would like to thank the Ginetta team and Jamie Falvey for the hospitality.

A New Chapter: The Bizzarrini ‘Giotto’