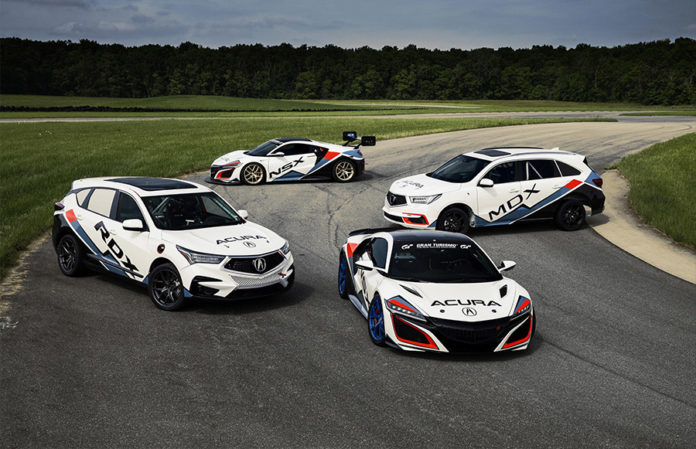 Acura will campaign the largest collection of competitive entries in the brand’s history in the 97th running of The Broadmoor Pikes Peak International Hill Climb on June 30. Acura is distinct from its competition in taking on the “Race to the Clouds” with hand-built, homegrown cars crewed exclusively by in-house engineers. Four production-based Acura models will challenge the field across multiple race classes, piloted by four full-time engineers who work in Acura product development in Ohio. Completing the lineup is the RealTime Racing Acura TLX GT all-wheel drive race car, driven by two-time class winner and SCCA Hall of Famer Peter Cunningham. 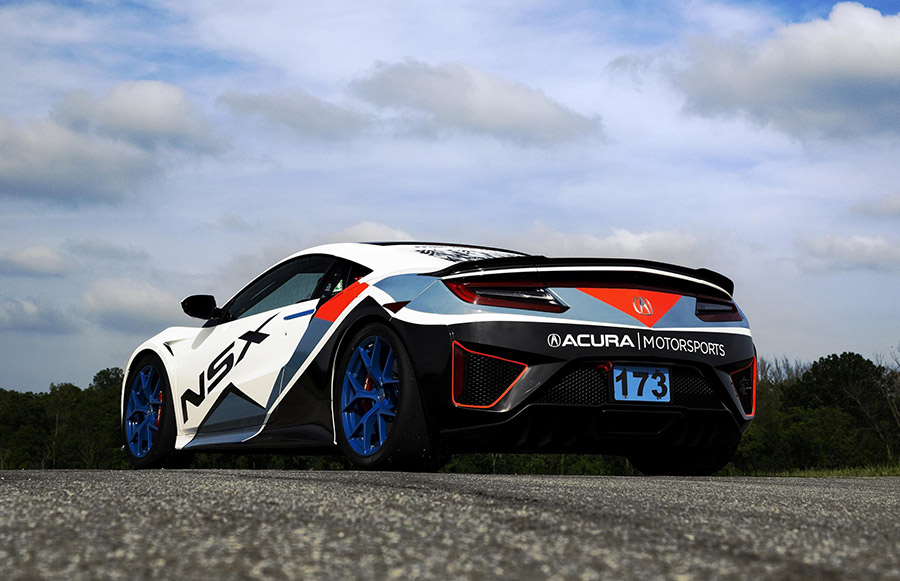 In addition to fulfilling the company’s “racing spirit”, the Acura Pikes Peak race team utilizes the treacherous hill climb event to grow the skills of young engineers within the company and serve as a test bed for future performance technologies in production vehicles. Led by Acura R&D engineers Justin Lumbard and Steven Olona, the team is responsible for all aspects of the program including the proposal of vehicles, buildout, crew support and navigating race cars to the finish line.

Acura has reached the 14,115-foot summit each of the last eight years, scoring numerous records and podium finishes. Most recently, in 2018, Acura achieved its second-consecutive Pikes Peak Open class win and an overall third place finish with Peter Cunningham in the RealTime Racing TLX GT (9:27.352). Additional record setting runs include a Hybrid Alternative Fuel record for the Acura NSX driven by James Robinson (10:02.448) and a Front-Wheel Drive record for the Acura TLX driven by Nick Robinson (10:48.094), both in 2018.

In addition to the five race entries, Acura will lead the pack to the summit with a 2019 NSX in Thermal Orange Pearl paint and Pikes Peak inspired race livery serving as the Official Pace Car for the historic hill climb event. 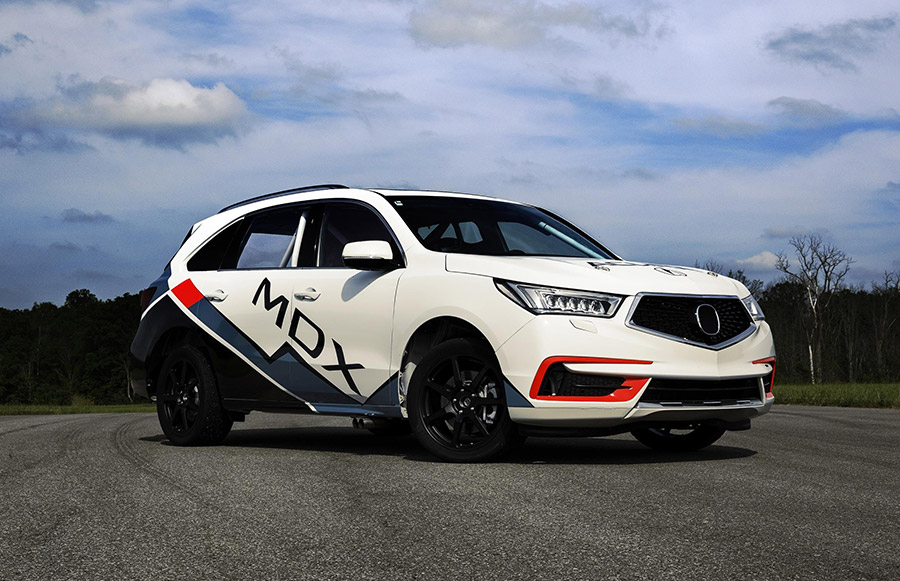 MDX Sport Hybrid
Acura will debut a race-prepared 2019 MDX Sport Hybrid built specifically for the hill climb. The Pikes Peak MDX utilizes the standard MDX (non-hybrid) 3.5-liter V6 VTEC® engine, bored out to 3.7-liters. The larger displacement engine operates in tandem with Acura’s unique three-motor electric hybrid system and 7-speed dual clutch transmission (DCT). The Pikes Peak MDX Sport Hybrid produces a combined 400 horsepower and 350 lb.-ft. of torque through the use of special tuning to both the engine and the electric motors. 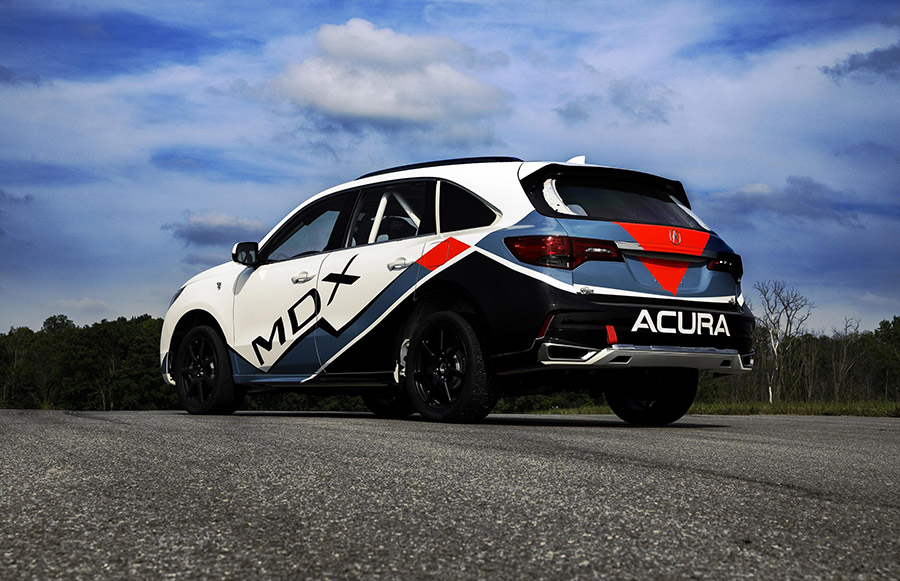 The MDX Sport Hybrid SH-AWD® system and race-tuned active-damper suspension have been optimized to improve dynamic balance and maximize performance. A custom roll-cage, designed in-house, increases structural rigidity (and adds safety) while extensive weight reduction was accomplished by removing much of the vehicle’s interior, including the passenger and second and third row seats.

Driving the MDX Sport Hybrid will be Jordan Guitar of Acura R&D’s Chassis Development Group. Guitar made his Pikes Peak debut in 2018, piloting the 2019 RDX. Foul weather hampered Guitar’s run, limiting him to just the lower two thirds of the mountain. He finished third in class. 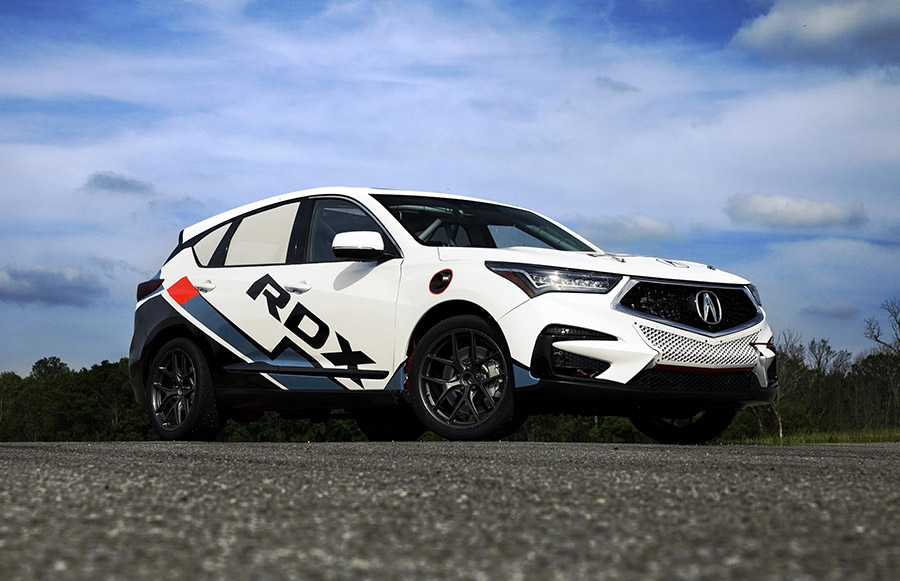 2019 RDX A-Spec
The 2019 RDX A-Spec returns to the mountain following its Pikes Peak debut in 2018, featuring a production-derived 2.0L VTEC® Turbo engine, sport tuned 10-speed automatic transmission and 4th-generation of Acura Super Handling All‐Wheel Drive™ (SH‐AWD®). The RDX’s engine has been optimized for the hill climb with a larger turbocharger, short-path intercooler and electric supercharger fed by a 48-volt micro-hybrid system. Total output is 350 horsepower and 330 lb.-ft. of torque. Software calibrations to the RDX’s production SH-AWD® system allow for more rear-wheel torque bias, while still enabling 100-percent of rear-wheel torque to be transferred individually to the left or right rear wheels. 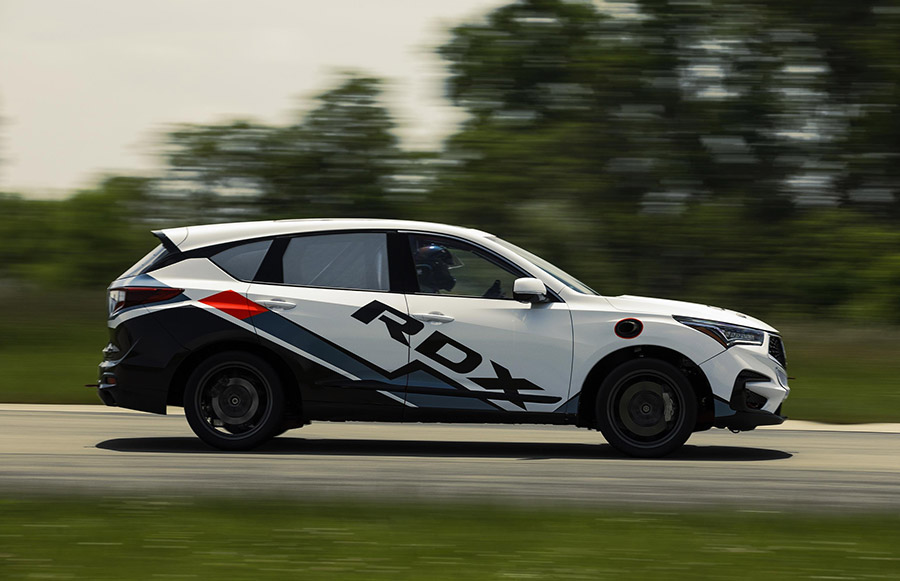 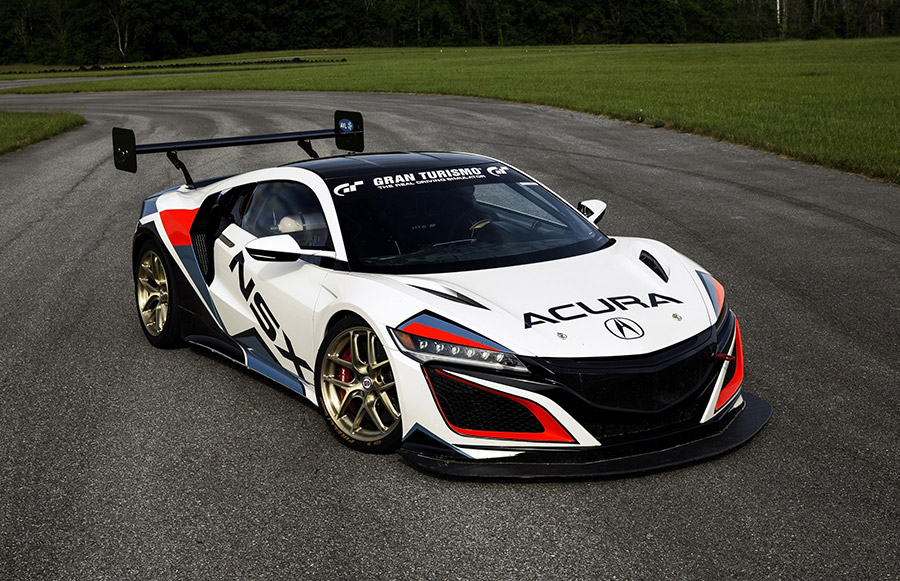 A 9-time Pikes Peak veteran, James Robinson will again serve as the lead of Acura’s Pikes Peak race team. Robinson’s past successes at Pikes Peak include a Hybrid  Alternative Fuel record set in 2018 (10:02.448) as well as podium finishes in the Exhibition, Open and Time Attack 1 classes. 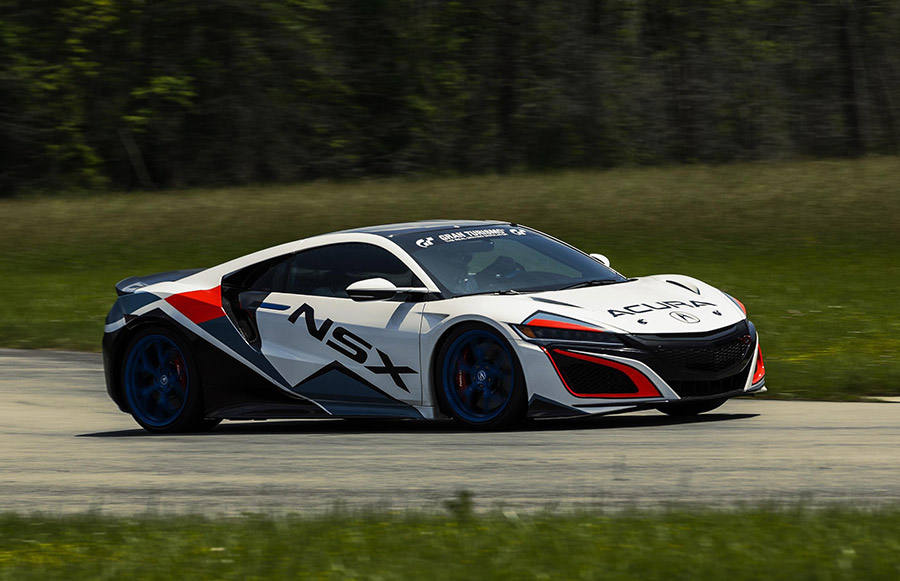 Production-Spec NSX
The second of two NSXs competing this year is a near-production NSX with only safety-related modifications, including an internal roll cage, racing seat with harness and fire suppression system. Utilizing the second-generation NSX’s factory twin-turbo V6 engine and three motor electric Sport Hybrid system, the NSX produces a combined 573 horsepower and 476 lb-ft. of torque. Power is channeled to the rear wheels through the world’s only 9-speed DCT in a production automobile, while twin electric motors independently vector torque between the front wheels to enhance the NSX’s acceleration, braking and cornering abilities.

The production-spec NSX will be driven by Nick Robinson, brother of James Robinson, and an accomplished engineer with Acura R&D’s Chassis Development Group. A Pikes Peak veteran himself, Nick Robinson established a new front-wheel-drive record for Pikes Peak in 2018 and achieved a Class Win in Time Attack 2 with a second-gen NSX in 2016. The year prior, he won the PP250 class on a Honda motorcycle. In addition, Nick Robinson serves as a driving safety expert and helps mentor his colleagues in developing their driving skills. 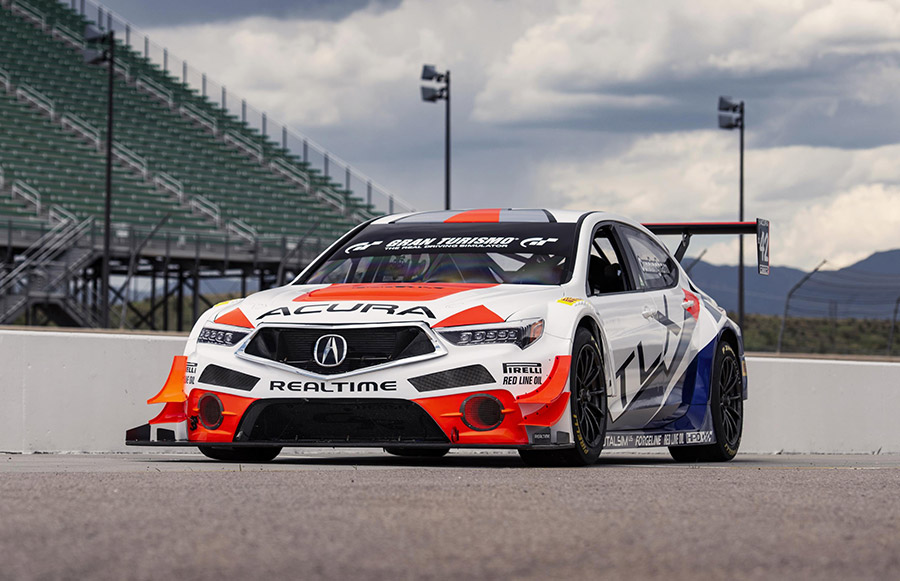 RealTime Racing TLX GT
The RealTime Racing TLX GT all-wheel drive race car returns to Pikes Peak in 2019 following a commanding 2018 Open Class Record and overall podium finish. Featuring an Acura twin-turbocharged J35 V6 motor used in past Pirelli World Challenge series competitions, the TLX GT’s powertrain has been tuned for the unique elevation changes of Pikes Peak. The software mapping developed by Honda Performance Development (HPD) optimizes turbo operation and boost pressures for the decreasing levels of oxygen on the way up to the 14,115-foot summit. RealTime has developed the TLX GT’s suspension specifically for the hill climb, and geared the transmission for faster acceleration when exiting the course’s many tight hairpin turns. Additional enhancements for 2019 include increased downforce via a new rear diffuser configuration. 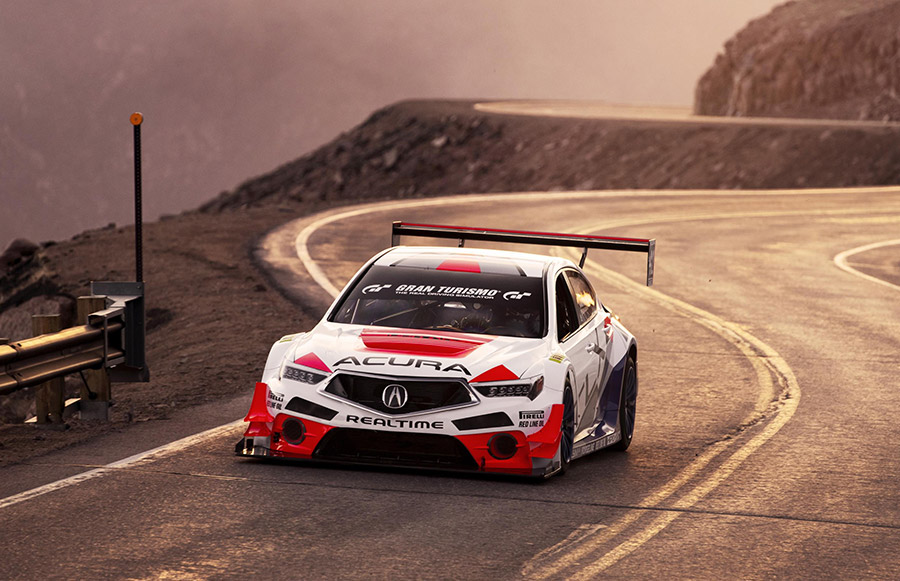 The TLX GT will again be piloted by Peter Cunningham of RealTime Racing, which has campaigned Acura race cars dating back to 1992. A distinguished member of the SCCA Hall Of Fame, Cunningham made his Pikes Peak debut in 2017 earning an Open Class win (2nd Overall) and being named ‘Rookie of the Year’. In 2018, Cunningham repeated the success with another Open Class win and 3rd overall finish. Cunningham has claimed more than 90 professional race wins across 12 different North American road racing series and holds numerous World Challenge race records.