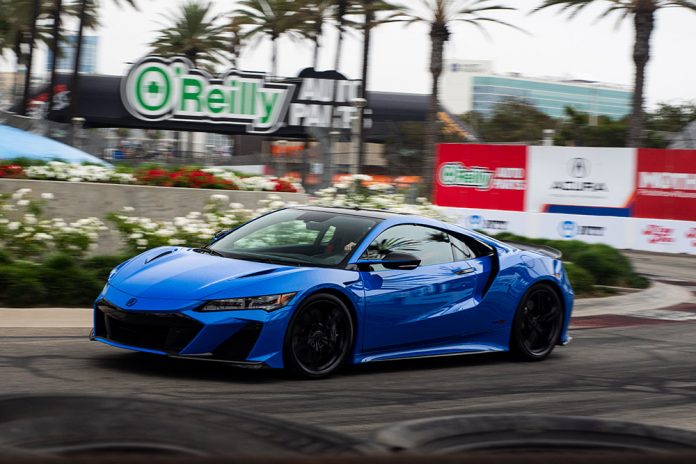 “Long Beach is such a fun track, but definitely challenging with so little margin for error,” said Ricky Taylor after the record setting run. “Thankfully, the new Acura NSX Type S is not only crazy fast, it’s also remarkably easy to control at the limit. It’s a very special car and perfectly suited for a track like this.”

Delivering an even more emotional driving experience, the new 2022 Acura NSX Type S raises the already impressive performance of Acura’s cutting-edge electrified supercar to new levels. Its enhanced twin-turbocharged V6 shares its turbos with the NSX GT3 Evo race car and the total output from the NSX’s revolutionary three-motor Sport Hybrid SH-AWD® power unit has been increased to 600-horsepower and 492 lb.-ft. of torque.

Instantly recognizable by its new, more aggressive styling, NSX Type S is as purposeful as it is beautiful. A distinctive new front fascia with a wider air inlet increases engine cooling and an NSX GT3-insprired rear diffuser improves its aerodynamic performance. Every angle has been carefully crafted by designers and engineers working closely together to enhance the supercar’s performance as well as create a distinct and dramatic design.

In celebration of the final year of NSX production, just 350 limited edition Type S models will be built, with 300 units destined for U.S. customers.