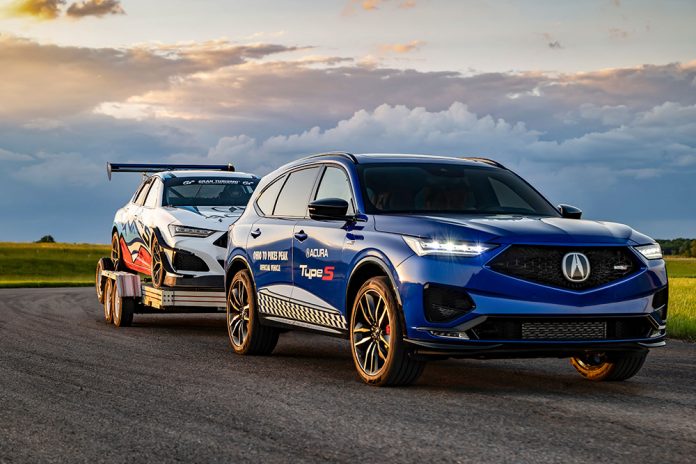 A pair of race-prepped Acura TLX Type S sport sedans will make their racing debut as Acura returns to The Broadmoor Pikes Peak International Hill Climb, brought to you by Gran Turismo, with multiple race entries piloted and crewed by the company’s R&D engineers. This year the performance brand will have four production-based race cars competing in the 99th running of Colorado’s “Race to the Clouds” on June 27, challenging the 12.42-mile 156-turn mountain course.

Making its public debut, the turbocharged 2022 MDX Type S will tow one of the TLX Type S race cars from the team’s shop in Raymond, OH to Pikes Peak, CO and support the Acura team during competition. A high-performance version of Acura’s new flagship SUV, the turbocharged MDX Type S is the first Acura SUV to wear the Type S badge and will be the brand’s quickest and most powerful SUV ever when it goes on sale later this year.

Motorsports are a key proof point of Acura’s commitment to Precision Crafted Performance, and its Pikes Peak efforts are a pure expression of this ethos. For the 11th year in a row the Acura race team consists of Acura R&D engineers who compete in the world-famous hill climb to grow their skills and test future performance technologies for Acura production vehicles. The all-volunteer team is responsible for every aspect of the brand’s involvement, including the development of the race vehicles, race prep, crew support and of course driving duties.

Since first competing at the event in 2011, this volunteer effort has chalked up numerous race records and podium finishes. Acura currently holds the Hybrid class record set by James Robinson last year in the “Time Attack” Acura NSX (10:01.913), and the front-wheel drive record set in 2018 by Nick Robinson behind the wheel of a first-generation Acura TLX (10:48.094). Acura also holds the Pikes Peak Open division record of 9:24.433 set by Peter Cunningham behind the wheel of the Acura TLX GT race car.