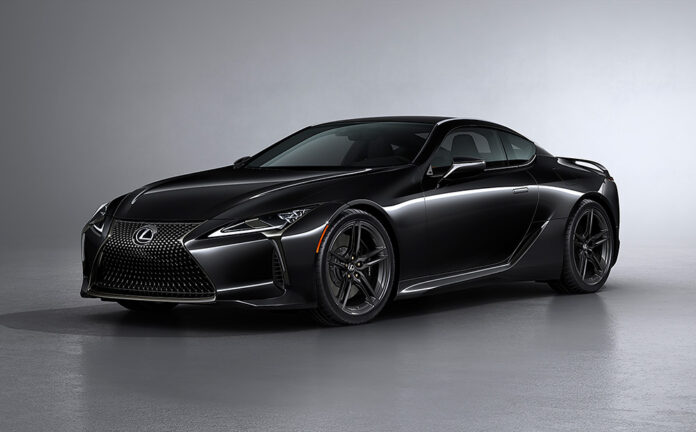 The Lexus LC 500 needs no formal introduction. It greets all encounters with a growl from its powerful 471-horsepower naturally aspirated V8 engine. Its artfully chiseled lines and refined curvature marry luxury and performance in a way that only Lexus can. The new 2021 LC 500 Inspiration Series takes the grand-touring coupe to the next level with an aviation-inspired design that will land in dealerships later this winter.

Inspiration Takes Flight
The new LC 500 Inspiration Series, the fifth on the LC platform, takes cue from a partnership between air race pilot Yoshihide Muroya and Lexus engineers. The Lexus team worked on ways to create efficiencies for Muroya’s aircraft for everything from the grip design of the control column to maximizing aerodynamics efficiencies using testing data learned on Lexus automobiles. The partnership ultimately assisted Muroya on his path to winning the 2017 Red Bull Air Race World Championships.

With some of the same engineers who built the Lexus LFA supercar on board, Lexus took a unique approach to the aerodynamic efficiencies of Muroya’s airplane by turning a preconceived concept on its head – literally. They found that taking an airplane wing and flipping it upside down created vortices that improved maneuverability and efficiency at the wingtips. After the team was able to prove their theory on Muroya’s aircraft through testing and competition success, the Lexus team then aimed to employ that knowledge onto the LC by creating an automotive wing prototype built from aluminum. The team knew the final version, which would span nearly six feet in width, would need to be light, durable and warp resistant. Carbon-fiber, the same material employed on Muroya’s aircraft, seemed like the appropriate material. Yet creating a carbon-fiber wing that large, much of which would be done by hand, would be a great challenge – but it’s one the engineers took head-on.

In the end, the engineering team created an exquisite carbon-fiber reinforced plastic (CFRP) spoiler that meets the demanding production quality expected of Lexus vehicles. The wing serves as the defining attribute of the new LC Inspiration Series, following the trailing edge arc of the trunk and uniquely defined with two downturned winglets on either end. The winglets, of course, are fully functional and create a vertical vortex that helps smooth out the turbulence generated from airflow along the car’s flanks.

Limited Engagement
The 2021 LC 500 Inspiration Series certainly has an interesting backstory, but its aerial inspiration is only part of the narrative. With only 100 units available, the latest Inspiration Series is a limited edition of the highest order.

Standing apart from the standard LC 500, a magnificent vehicle in its own right, the 2021 Inspiration Series is accented with a combination of features not found on any other LC package. The limited-edition vehicle is offered in one exterior color, the superbly dark Obsidian, which is paired with bold and beautiful 21-inch black forged-alloy wheels that fill out the wheel wells. An eye-catching carbon-fiber reinforced plastic (CFRP) roof is standard, and it proves to be the perfect complement to the carbon-fiber rear air wing spoiler.

Stepping inside, the serialized badge on the center console immediately identifies the limited nature of the vehicle and its sequence of the 100 produced. The cabin is adorned with black Alcantara-trimmed sport seats that feature elegant Saddle Tan accents and seat belts. The steering wheel and shift lever are also accented in black Alcantara trim. A carbon-fiber scuff plate accents the door, and once inside driver and passengers can bask in the sound of the standard Mark Levinson 13-speaker 915-watt Reference Surround Sound Audio system.

The World’s Most Expensive Lexus | LFA