2017 Ford GT: the Car, the Emotions and the Ecstasy of Acceptance by Ford 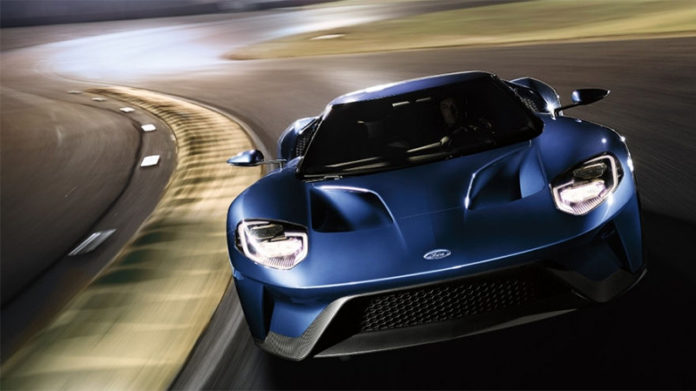 One could compile volumes about Ford and their racing endeavors. With a racing history dating back to 1901, there is no time in history where Ford wasn’t a prevalent name in auto racing. The name has dominated at all levels of Motorsport: Indy Car, NASCAR, Formula 1, World Rally, and sports car racing. However, as the late-great Carrol Shelby once remarked, “I’ve always been asked, ’What is my favorite car?’ and I’ve always said ’The next one.’” 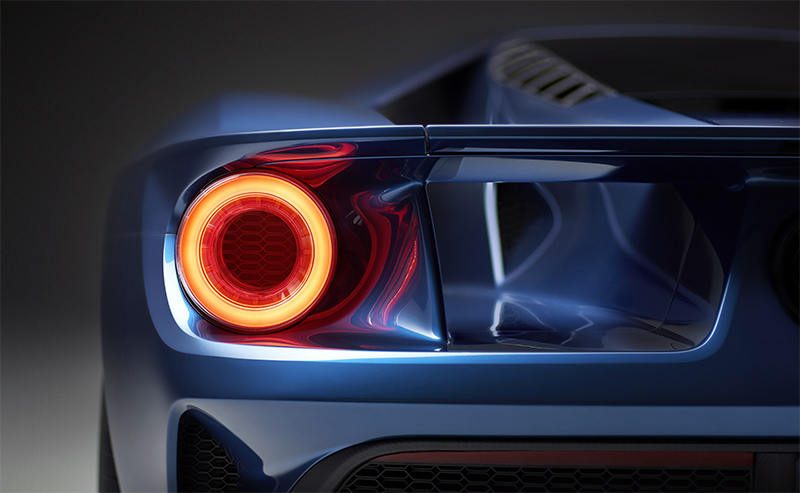 Enter the 2015 North American International Auto Show. Every January, the motoring world turns its eye toward Detroit. Other shows have taken the spotlight from Detroit in recent times, but everyone knows that Detroit is where the magic happens. Unbeknownst to the world, Ford would soon dominate the headlines.

Other manufacturers have been focusing on mobility. Electric cars, hybrids, and Autonomous Driving are released to much fanfare. This is the frontier of automotive innovation. While Ford is a major player in these fields, they certainly did not forget their roots. It was on this day that history would be made. Having promised 12 “Performance” models in five years, Ford threw down the ultimate trump card: The 2017 Ford GT.

This would be the third iteration of the hallowed Ford GT marque. The first, known as the GT40, was the result of a dispute between Henry Ford and Enzo Ferrari. At the 11th hour, Enzo reneged on a deal to sell Ferrari to Ford. The jilted Ford decided to beat Ferrari at their own game, commissioning their own sports racer. To say the GT40 was a success is an understatement, having won the 24 Hours of LeMans in 1966, 1967, 1968, and 1969. The GT40 was designed to do one thing: win. After 1967, Ford ceased operations of a factory-backed team at LeMans.

For their Centennial, Ford decided to revive the “GT40.” Due to a trademark dispute with Safir GT40 Spares, owner of the “GT40” name, this latest iteration would be known as the “GT.” Despite its retro looks, the new GT was a cutting-edge sports car for the new millennium. Featuring a supercharged all-aluminum DOHC 5.4 V8 mated to a Ricardo 6-Speed transaxle, the 2005-2006 Ford GT was one of the last true “analog” supercars. The fact that these cars are now trading hands for twice their original MSRP speaks volumes to the importance of the Ford GT nameplate. 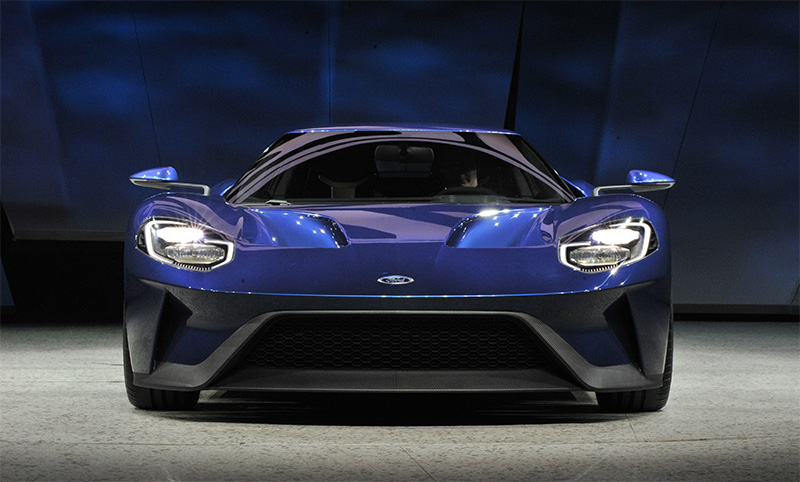 Not one to squander away their history as one of the most storied manufacturers, Ford had big plans for 2016. It would be 50 years since their first LeMans win, having earned a 1-2-3 finish in 1965. Lightning never strikes twice, but history occasionally repeats itself. Ford not only was producing the GT as a road car, but they were to drive head-on into the middle of the GTE Pro class in the FIA World Endurance Championship.

Much like the original GT40, this was to be a race car first. Showcasing Ford’s commitment to environmentally-friendly performance, there is no V8 to be found in the new GT. A 600+ HP 3.5 Liter Twin-Turbo “Ecoboost” V6 is the proverbial heart of the new GT, and is mated to a 7-Speed Dual-Clutch Transmission. Produced by Multimatic, the 2017 GT features a hand-laid carbon fiber tub and bodywork. Active aero and suspension ensures that the most can be extracted from the 20” Michelin Pilot Sport Cup 2 tires. To the dismay of many, only 500 were initially slated for production over a 2-year run.

With a scarce amount of cars being produced, Ford introduced a new application program to ensure that the new GT made it into the hands of the “right” type of customers. Nothing is more disheartening than a race car that isn’t afforded the opportunity to stretch its legs. Ford is not looking for “owners,” but ambassadors of the brand. These are social media influencers, collectors, and racers.

The application process collected information on the owner’s Ford ownership history, philanthropic endeavors, racing experience, and social media reach. An emphasis was placed on how a potential owner planned to use the car. All signs pointed to favoring owners of previous Ford GTs and those with track experience. Luckily for us, our Editor-in-Chief Jeff Francis is both of those.

Ford received 6,506 applications in total. Most applicants received a denial letter. A select few received a congratulatory letter, announcing their approval to purchase their GT and explaining the next step in the ordering process. There is also a third letter for those placed upon a waiting list. 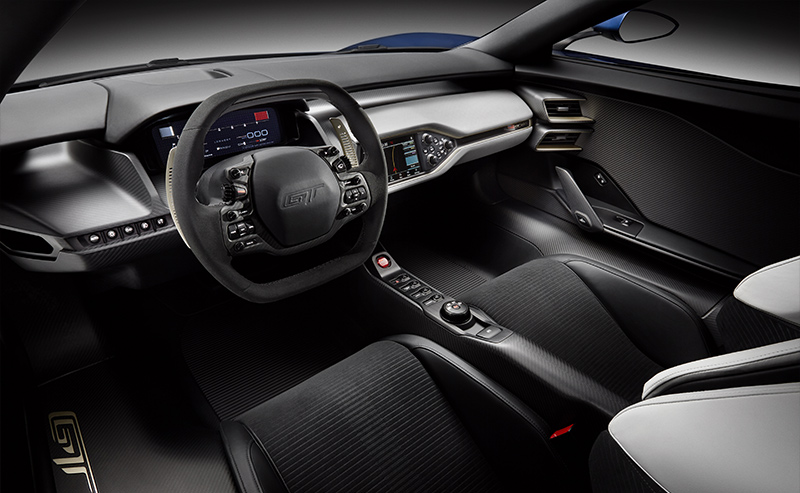 Initially, being placed upon the waiting list did not guarantee that one would be able to order a GT. However, Ford recently confirmed an additional 2 years of production of the GT, bringing the total to ~1000 examples. This will run concurrently with a continued factory-backed effort in the World Endurance Championship.

We at The Speed Journal are proud to announce that Jeff Francis has been afforded the opportunity to purchase a new Ford GT! In the future, we will offer you an inside look at our interaction with the Ford GT Concierge Team and the ordering process. More information as it becomes available. 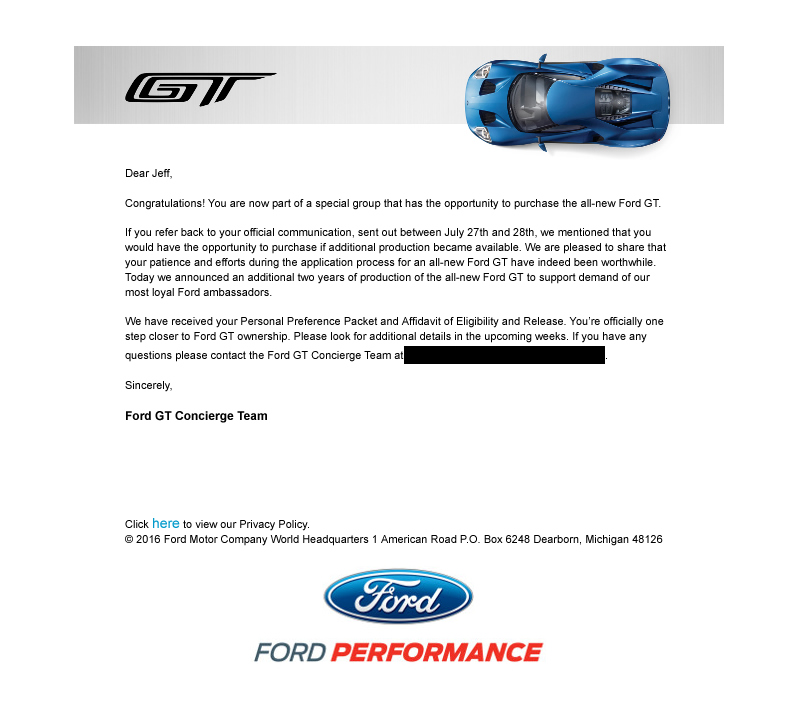