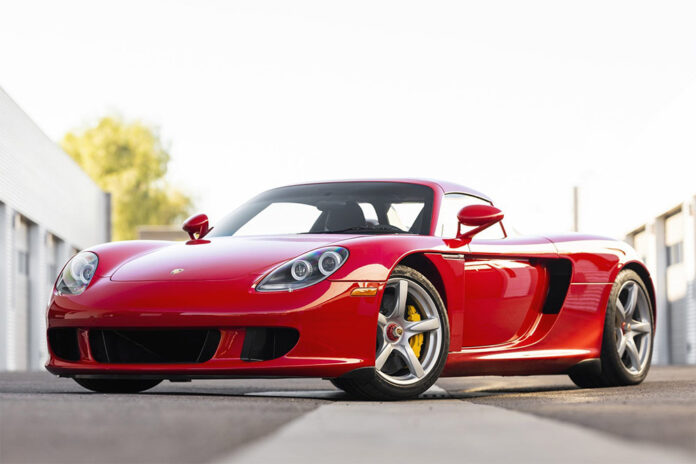 A 2005 Porsche Carrera GT has become the most expensive vehicle ever sold on the Bring A Trailer website. The Guards Red over black leather Carrera GT sold for $1,902,000 and is just one of 1,270 examples built during a four-year production run.

About this 2005 Porsche Carrera GT

This 2005 Porsche Carrera GT was originally delivered to Stevinson Imports of Littleton, Colorado. The car is finished in Guards Red over black leather upholstery, and power comes from a 5.7-liter V10 mated to a six-speed manual transaxle with a limited-slip differential and features include staggered-width forged magnesium wheels, a ceramic-composite clutch and brake rotors, an electronically actuated rear spoiler, and removable roof panels.

The carbon-fiber body panels on this example are finished in Guards Red with matching removable roof panels. Aerodynamic elements include an undertray, a rear diffuser, and an electronically actuated rear spoiler that can also be deployed manually.

Forged magnesium wheels measure 19×9.5” up front and 20×12.5” at the rear and are secured by center-lock nuts that are color-coded in reference to thread direction. Michelin Pilot Super Sport tires measuring 265/35 up front and 335/30 out back were reportedly mounted in June 2021. Pushrod-activated coilover struts are mounted inboard all around. Stopping power is provided by cross-drilled 15” ceramic composite brake rotors with yellow six-piston monobloc aluminum calipers at each corner. A brake fluid flush was performed in June 2021.

The cockpit features XT-sized racing-style seats with carbon-fiber and Kevlar shells trimmed in black leather along with a matching dashboard, center console, door A-pillars, and door caps. The Carrera GT features magnesium, carbon-fiber, and aluminum interior trim, and additional equipment includes one-touch power windows, air conditioning, powered and heated side mirrors, and a Porsche Online Pro stereo. The high-mounted shifter is topped with a laminated beechwood knob in homage to the balsa units that appeared in Porsche 917 race cars.

The Carrera GT concept car first appeared at the 2000 Paris Motor Show as an offshoot of the late-1990s LMP2000 development prototype that never came to fruition. The model entered production in 2003 with construction incorporating a carbon-fiber-reinforced plastic monocoque and subframe built by ATR Group in Italy.

By: The Speed Journal