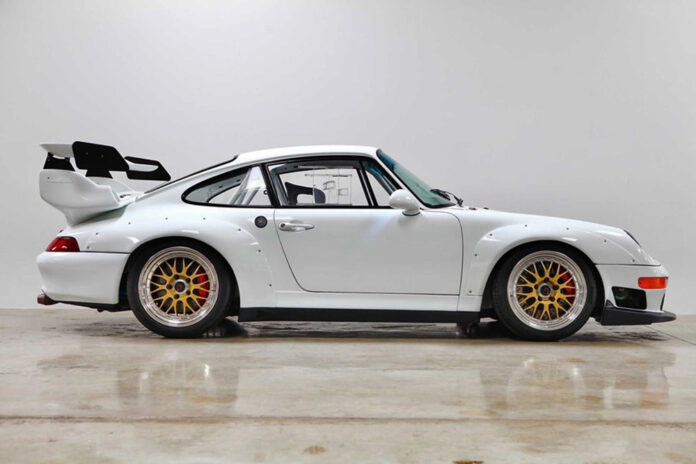 Portland-based Avant-Garde Collection, the award-winning top-seller (@911r) on the curated digital auction platform ‘Bring a Trailer,’ is exclusively representing another remarkable vehicle — a 1996 Porsche 911 GT2 EVO. Setting this sale apart is the intention to donate 10 percent of the net commission to non-profit foundation Drive Toward a Cure™, to benefit Parkinson’s Disease.  This well-documented and meticulously maintained genuine ’96 GT2R is one of four late 1995 chassis built in December 1995 to 1996 GT2R spec and is valued at $1.4million US.

According to Tom Floyd, General Manager of Avante-Garde Collection, he and company owner Matt Crandall have retained exclusive representation for the GT2R EVO sale, with the vehicle currently residing in the UK.  “Matt and Avante-Garde have a proven track record with every traditional major automotive auction house from RM Sotheby’s and Bonhams to Gooding & Company and Barrett-Jackson, having created a commanding presence through personal channels as well.”  Floyd notes that Avant-Garde client relationships span the globe and are committed to pre- and after-sale support through every transaction and touch point.

“The excitement to offer this 1-of-4 rare Porsche in-house, rather than through an auction process furthers our philosophy in retaining close relationships with our clients,” said Floyd.  “And the ability to align this sale with a charitable endeavor, keeps our commitment to the community equally involved.”

Floyd has been a longtime supporter of Drive Toward a Cure, additionally the charity of choice for the annual Taste of Motorsports series which he created as a series of broad enthusiast-based events that showcase luxury vehicles both on- and off-track.  Floyd aligned with the non-profit through three of his premiere luxury automotive events last year, raising more than $30,000 for the Parkinson’s cause and specifically benefiting Parkinson’s Foundation Centers of Excellence in Portland, Phoenix and San Francisco.

Each of the four GT2Rs met changes in Porsche Motorsport regulations (including safety couplings in the fuel system), and this chassis earned additional simple improvements from experience gained in the GT2R’s first season, including new outside oil-filler in the side panel, first-generation Evo front bumper, flat under-floor, Macrolon plastic rear and rear-quarter windows, plus a host of smaller technical upgrades made in areas such as the rocker arms, the lubrication system of the turbochargers, the throttle cable and reprogramming of the ECU.

Summarized technical changes are included with documentation and were originally included within a Porsche Motorsport Rundschreiben /circular dated November 29, 1995.

Now available for either road registration or competition preparation for any of the most prestigious historic endurance race events in the world.