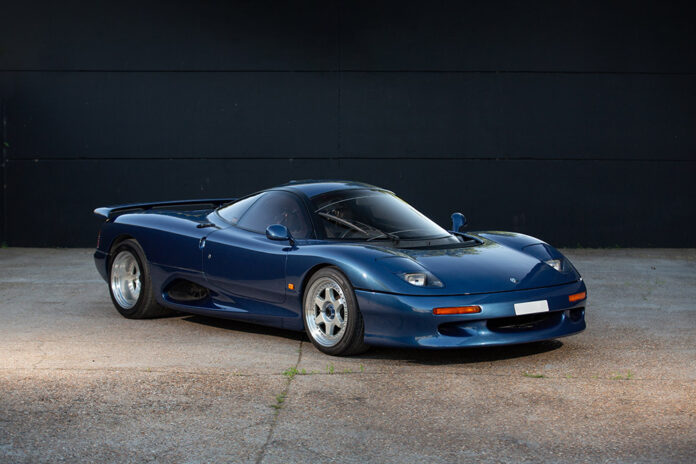 Recalling its near-absolute domination of international endurance racing throughout the 1950s, Jaguar returned to its winning ways during the late 1980s. Under the capable leadership of Tom Walkinshaw, the veteran racer who had won the 1984 European Touring Car Championship behind the wheel of a Group A-specification XJ-S, Jaguar again chalked up Le Mans victories in 1988 and 1990 and took the World Sportscar Championship in 1987, 1988, and 1991. Most importantly, Walkinshaw helped Jaguar finally break Porsche’s long reign as the leading endurance-racing constructor.

In this heady environment, Walkinshaw sensed strong demand amongst many of the world’s wealthiest auto aficionados for an ultra-exotic and ultra-exclusive car based on a successful competition car. To exploit this small but profitable niche, Jaguar created the JaguarSport division to manufacture and market a new sports car, code-named R9R, for its select clients in partnership with Tom Walkinshaw Racing (TWR). In November 1990, a JaguarSport press release announced the introduction of the stunning XJR-15, which used the same technology and expertise of the XJR-9 and XJR-12 but in a more useable track-ready car. Just 50 were scheduled for production.

The XJR-15 was based on the same central monocoque “tub” as the Tony Southgate-designed XJR-9, and the body, designed by Peter Stevens—who later went onto design the McLaren F1, with this car’s large use of carbon fibre pre-dating that—was constructed with lightweight and advanced composite materials. The XJR-9 suspension was retained at all four wheels, with fabricated wishbones and horizontal pushrod-spring dampers at the front and coil springs at the rear. Four-piston AP Racing callipers, which were mated to disc brakes housed completely within the wheels, provided stopping power.

The Group C-specification engine was a 6.0-litre alloy, dry-sump V-12 producing 450 brake horsepower; featuring a Cosworth-forged crankshaft, connecting rods, aluminium pistons, and fuel delivery via Zytec electronically controlled sequential fuel injection. Walkinshaw’s work resulted in a car that weighed just 1,050 kilograms and was endowed with awesome handling, excellent power-to-weight and race-proven reliability, and a top speed of 215 mph. All this came at a price of nearly one million U.S. dollars when new.

This car, chassis number 021, was built with the five-speed manual transmission for road use that was allegedly an optional extra for new XJR-15 orders to the tune of around £30,000. The Jaguar is presented for sale having been retained by its current owner since 2017, later gaining road registration in June 2018. Prior to this, accompanying copies of import papers prove that the Jaguar had been kept in Japan before returning to the U.K. in 2014. The XJR-15 is accompanied by a work log folder documenting recommissioning by Gordon England of Forest Custom and Classic in 2018, showing that the car was stripped to its frame and reassembled. In the same year, the car was fitted with a replacement FIA-standard fuel bladder by Willians of Silverstone at cost of £3,503, and invoices from Earl’s Performance Products attest to the renewal of brake and fuel pipework on the underside of the car around the same time, apparently using the original parts as a template. Also on file is a Dating Letter from the Jaguar Supercar Register, issued in March 2017. The odometer reads 1,362 miles at the time of cataloguing, and the car is supplied with a copy of the Jaguar-issued Operators Manual.

One of just 27 examples produced, this XJR-15 offers a special opportunity to obtain one of the rarest “big cat” supercars, a car that is central to the history of both racing and road cars made by Jaguar. Allegedly capable of a top speed exceeding 190 mph when new, the XJR-15 broke boundaries that are still in the sights of many today, and this example will no doubt appeal to any Jaguar enthusiast.