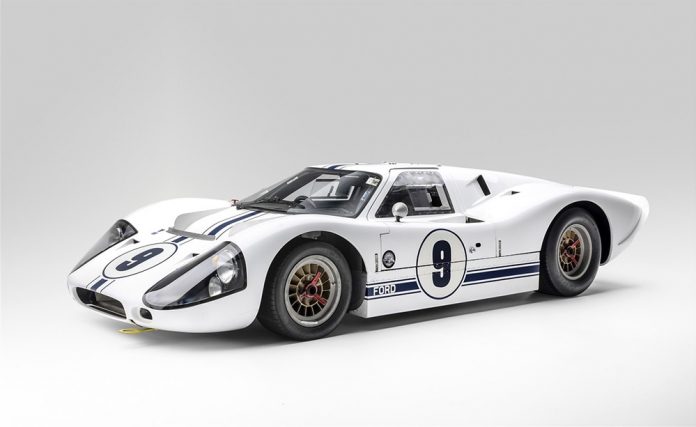 One of the greatest race cars ever produced, a 1967 Ford GT40, will line up with a host of world-class racers and sports cars at the forthcoming Bonhams Quail Lodge Auction on Friday August 13.

Dating from the year a Shelby/Ford GT40 Mark IV picked up Ford’s second of four consecutive overall victories at Le Mans, the GT40 offered is one of only 10 fully evolved Mark IV 7-liter ‘J-car’ variants. Assembled as a Group 7 Can-Am open-cockpit car, this GT40, known as J-9, was powered by a special all-alloy 427 V8 engine, originally destined for the 1968 Le Mans.

J-9 became the test car for a possible Ford campaign in the Can-Am G7A series and was driven that year at the Dearborn factory test track by Mario Andretti. However, with Ford’s attention turned to the new 5-liter versions required for Le Mans, J-9 was sold to brothers Charlie and Kerry Agapiou, ex-Shelby American Team members. They kept it until 2012 when it was acquired by Cobra Automotive of Connecticut who converted its body from its original open-cockpit Spider guise to a traditional Mark IV coupe.

J-9 was subsequently sold to the vendor who has participated in classic races around the world including in prominent events at Indianapolis and Goodwood. Offered with its original test body, the GT40 has an estimate of $3,000,000 – 3,500,000.

Another Carroll Shelby car is of course the Cobra. A trio of 1960s incarnations are offered at the Bonhams sale, led by a desirable left-hand drive export model 1964 AC Cobra 289, one of just 17. Delivered new to Canada and kept by its first owner for 45 years, the AC retains its original engine, transmission, chassis and aluminium bodywork. Its estimate is $900,000 – 1,100,000.