Focus switches to high-speed running as bike development ramps up 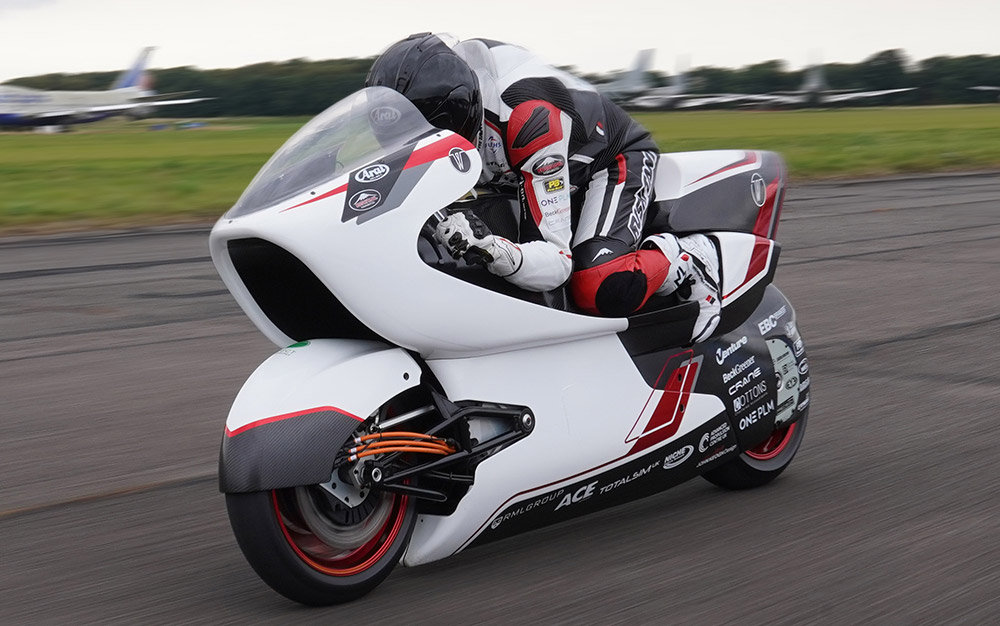 Ridden by company founder and Chief Executive Officer Rob White, the carbon-fibre prototype ran without fault during its shakedown test at Bruntingthorpe Proving Ground and has now completed a comprehensive full system pass off. The programme now moves on to the next phase of its multi-stage testing schedule including runs at a higher-speed range.

The WMC250EV, which is capable of reaching speeds of more than 250mph in final trim, featuring market-disruptive technologies including WMC’s ultra-low drag system V-Air. This innovative system uses a large duct at the centre of the bike which forces air through the vehicle, reducing aerodynamic resistance by 70% compared to a conventional motorcycle. The positive implications for this technology across the automotive industry are wide-ranging and extensive.

The bike also features a D-Drive motor unit that powers the front wheel, which in turn makes it possible to harness regenerative braking energy. In its final powertrain configuration the WMC250EV will feature an 800v high voltage system, but for the early testing phase it is using a low voltage (60v) system that produces 100kw. It is anticipated that in world land speed specification the bike will be two and a half times more powerful.

A key element of WMC’s initial phase of its process-driven programme, supported by multiple world leading motorsport businesses, was to successfully correlate the Computational Fluid Dynamics (CFD) data of the 300kg vehicle with the results of a real-world test. With this box ticked and various other avenues of development uncovered, the team will continue its methodical testing programme ahead of next year’s world land speed record which will include a British record attempt in early 2022.

WMC continues to engage with potential partners ahead of its ground-breaking record attempt. If successful, the WMC250EV could change the way motorcycle manufacturers approach vehicle design through the next decade because of its vastly reduced CO2 emissions and the possibilities it offers for accelerating the essential decarbonisation of the motorcycle industry globally. Indeed, the Northampton-based company is working on road-going projects and its patented technologies are already being incorporated into road-going variants. An announcement with further details on this is due in October.

“We are delighted with the progress made so far with the WMC250EV. We were encouraged by the great reception the launch of the bike received in June, and the high level of interest that the project has gained subsequently. This is a completely bespoke motorcycle, so for it to run cleanly straight out of the box is fantastic.

“We are taking a measured and controlled approach to our testing programme to ensure no stone is left unturned and given the results we have gained to date my confidence is building all the time that we will be successful.” – Chief Executive Officer Rob White

WMC testing will continue through the rest of 2021, with regular updates posted on its social channels, before embarking on its world land speed record build-up programme early next year.