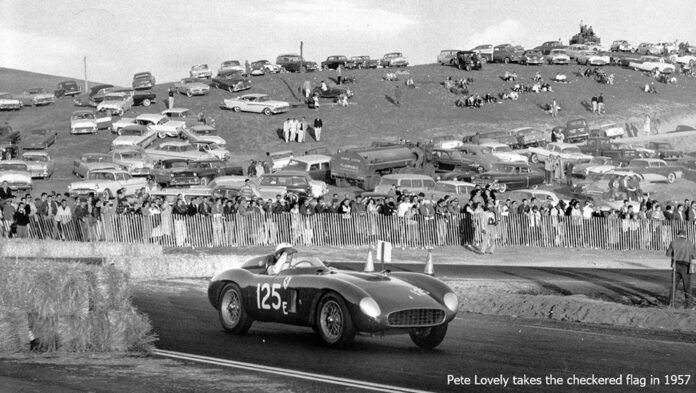 When the green flag waved on Nov. 9, 1957, for the Eighth Annual Pebble Beach Road Race, those in attendance had no idea that the freshly-paved race track quickly carved into the hills of the U.S. Army’s Fort Ord would evolve into WeatherTech Raceway Laguna Seca and become a world-renowned road course with legendary status. Sixty-four years later, the race circuit remains the heartbeat of Monterey County’s Laguna Seca Recreation Area.

As WeatherTech Raceway enters its 65th race season in 2022, it’s come a long way from when Pete Lovely – a future Formula One racer and owner of Pete Lovely Racing in Fife, Wash. – took Laguna Seca’s inaugural checkered flag behind the wheel of his 1956 Ferrari 500 Testa Rossa all those years ago.

The track has seen many legendary performances in its six-plus decades. Among those who have dominated the asphalt is one of the greatest motorcycle racers of all time – who loved the Monterey area so much, he moved here.

Wayne Rainey won three straight World Championships between 1990-92, while also capturing three U.S. Grand Prix wins at WeatherTech Raceway between 1989-91. The sweeping downhill lefthander through Turn 9, or the Rainey Curve, is named in honor of Rainey – who serves as the president of MotoAmerica, which will present one of the premier events on the 2022 schedule.

“Winning my three U.S. GPs at Laguna Seca was obviously very special to me because there’s nothing like winning your home Grand Prix in front of family and friends,” Rainey said. “After my retirement from racing motorcycles, I was honored when the track named turn 9 ‘Rainey Curve.’ Now, as president of MotoAmerica, I get to return to the track every year as it plays host to one of the premier events on our schedule, and it’s a race I always look forward to.”

In addition to having a part of the track named for him, Rainey’s likeness also has a permanent installation with a larger-than-life piece of art depicting his racing days at WeatherTech Raceway visible as guests enter the facility on “A” Road.

“No race track or place in the world brings about the same feelings that I get every time I drive up the hill into WeatherTech Raceway Laguna Seca,” Rainey said. “When I raced here, I had so much confidence. I loved the track, the fans and the Monterey Peninsula area. Initially, it was my home race because it was the site of the U.S. Grand Prix, but it actually became my home race when I moved my family to the Monterey Peninsula in 1992.”

Rainey’s dominance began right as the second chapter of the race track was being written. After maintaining its original form for the first 30 years of its existence, in 1988 the track was extended from its 1.9-mile setup to the 2.238-mile version that fans and drivers alike celebrate today. One of the most famous turns in all of motorsports essentially remains today as it was in 1957 – The Corkscrew – which drops six stories in just 450 feet of asphalt.

The original intent was that the lengthened circuit would be utilized for motorcycle racing, and race cars would continue to use the original track setting with its fast, long exit from Turn 2 to what is now Turn 5. There is still a portion of the original left-hand kerbing visible in the Hagerty Marketplace where the likes of the ground-pounding Can-Am cars kept the throttle fully engaged. It was joked that if someone missed the next turn (today’s Turn 6) the car would end up in downtown Salinas.

However, prior to the 1988 Indy Car race, Mario Andretti drove both configurations of the track and insisted that Indy Car utilize the full 2.238-mile lap, especially the hairpin, as it offered a great passing opportunity.

The rest is history, and the man who made the permanent change happen had the Turn 2 Hairpin named for him upon his last race and retirement in Monterey in 1994. He still returns to give two-seater hot laps to lucky race fans during the Firestone Grand Prix of Monterey.

Andretti isn’t the only INDYCAR driver to leave a legacy at WeatherTech Raceway. Bobby Rahal was a mainstay at the top of the podium in Monterey, winning multiple times throughout the ’70s and ’80s as a driver, and then as a two-time winner in the late 1990s as the car owner for Bryan Herta.

Rahal’s pass of Andretti in the 1986 Indy Car race, on what’s now known as the Rahal Straight, propelled him to his third of four victories at WeatherTech Raceway.

The family legacy has been continued by Bobby’s son Graham, a 14-year INDYCAR veteran, competing at the track in recent years.

More than just a race track

Since its inception, WeatherTech Raceway has seen more than just racing action. The Grateful Dead performed at the venue in May 1987, and Pope John Paul II visited later that year. The Sea Otter Classic, one of the largest multi discipline cycling festivals in the world, is held here annually. There have been weddings at the Corkscrew, and in 2020 the graduation ceremonies for local high schools were held amid the pandemic and ended with a lap on the track.

“This is a special place – and not just for racing,” said John Narigi, president and general manager of WeatherTech Raceway Laguna Seca. “Entering our 65th season, it’s important to remember that we also have Laguna Seca Recreation Area, which offers incredible hiking, biking and camping on a year-round basis. There are many reasons this multiuse facility is special, and as we head into the future, we will continue to invest in bringing more exciting events here for the entire community to enjoy.”

The beautiful destination complements the Laguna Seca Recreation Area. “We are fortunate to be located minutes away from a thriving destination of rich farming land and wineries throughout both the Carmel and Salinas Valleys and the coastal towns of Monterey, Carmel-by-the-Sea and the ruggedness of Big Sur,” Narigi added.

To celebrate the 65th anniversary, the 2022 premier event schedule begins with the Trans Am Speedfest April 22-24, followed by the IMSA WeatherTech SportsCar Championship featuring the Hyundai Monterey Sports Car Championship April 29 – May 1.

New ticket packages, from single day to comprehensive VIP packages, will be available Dec. 1 by calling the Tickets and Accommodations specialists at 831-242-8200 or by visiting www.WeatherTechRaceway.com.

Tickets on Sale Dec. 1 for the 2022 Season at WeatherTech Raceway Laguna Seca