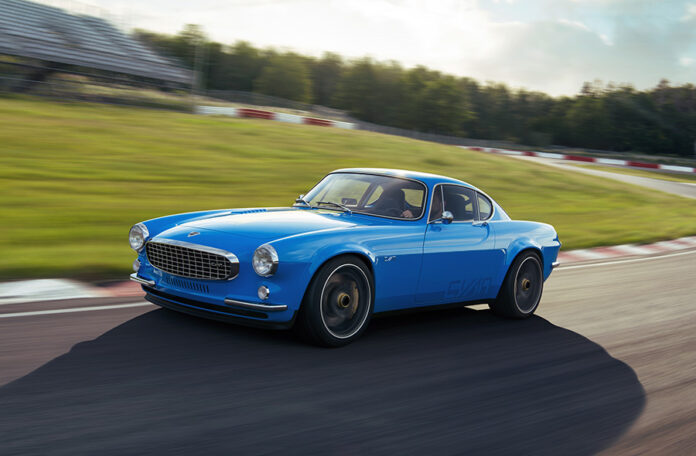 Cyan Racing, the reigning triple World Touring Car Champions, has revealed the Volvo P1800 Cyan, an interpretation of the iconic Volvo sports car from the sixties. The car is engineered by the team behind the first world title-winning Volvo race car and the Volvo C30 Polestar Concept Prototype.

”Our company was founded in 1996 to race Volvo cars in Sweden and the Volvo P1800 Cyan is closing the circle for us,” said Christian Dahl, CEO and founder of Cyan Racing.

“We claimed our first world title with Volvo in 2017 and have since then won two further world titles with two other manufacturers. The first world title was a milestone for us, and we felt it was a good time to reconnect with the past and to those before us racing Volvos. The first Volvo P1800 Cyan carries our blue and yellow racing colours to mark our heritage.”

“The Jaguar, the Ferrari and the Porsche are all cars with a continuation,” said Christian Dahl.

“That left us with inspiration to create what could have been if we as a race team had been there during the sixties, racing the P1800, and got to design a road version of our race car.”

“We have done that before with three of our race cars, the Volvo C30, the Volvo S60, when we were known as Polestar, and last year the Lynk & Co 03 Cyan. The Volvo P1800 Cyan is our interpretation of what could have been.”

Looking back in the midst of a paradigm shift
In the age of autonomous driving, electrification and connectivity, Cyan Racing decided it was time to capture what has been and to make it timeless.

“Obviously we could have built an electric Volvo P1800 filled with all the latest technology, comfort and luxury. But that was not what we wanted,” said Christian Dahl.

“Amid this paradigm shift we decided to slow down time and freeze a part of it in our own time capsule. To take the best from the golden sixties and combine it with our capabilities of today, keeping a pure yet refined driving experience.”

Tailored to deliver genuine driving pleasure
While creating the Volvo P1800 Cyan, the team behind it decided to treat the design and engineering of the sixties with care, moving it forward in a delicate way.

“We decided to apply our expertise in engine, aero and chassis design for a car that delivers on the Cyan engineering philosophy in terms of predictability and intuitive driver control, yet keeping the light-weight, analogue driving experience of the sixties,” said Mattias Evensson, Project Manager and Head of Engineering at Cyan Racing.

There are no driver aids to distort the driving experience, meaning no stability control, ABS or brake booster.

“The Volvo P1800 Cyan is about clearing away anything disturbing the direct connection between driver, tyres and the road. Our objective has been to keep that undisturbed sensation whilst refining it with the best technology of today,” said Mattias Evensson.

“The Volvo P1800 Cyan is the result of an advanced engineering process, involving many of the same talents who designed, built and developed our world title winning Volvo S60 TC1 Cyan,” said Christian Dahl.

The Volvo C30 Polestar Performance Prototype, the first road car of Cyan Racing, was used for benchmarking throughout the development process.

“A vital part of the project was to reconnect with our first road car,” said Mattias Evensson.

“We wanted to carry over some of the driving feeling and performance availability from that car and it has been thoroughly useful throughout the development process.”

Pricing and individual specification is available for prospective clients.

Back to Basics With the Volvo P1800 Cyan in Northern Sweden

Volvo 360c Autonomous Concept: Why Fly When You Can be Driven?